The World War has begun! You are the only one left to fight. One life, one chance to prove to yourself and to the world that you are THE CHOSEN ONE, the HIGH SCORE keeper.
V8ORS - Flying Rat is a Endless Top Shooter game for the mobile devices, Android and IOS. The main goal is to survive and beat your own High Score, you can share it to your Social Networks and be the CHOSEN ONE.
The difficulty increases as you gain more Points. The helps you have is to catch a POWER-UP to increase more fire power and an armor for an extra damage point, evasive maneuvers like a Tailspin and a Loop, allows you to escape enemy fire, The rest is just skills. Like they said “Easy to learn, hard to master”.
A game designed to be played without having the need to go every day and fight to Upgrade or make any kind of Quests, a simple top shooter for the old arcade gamer who like to shoot planes, but in a LowPoly 3D style to catch the eye.
Simple, clean and deadly, it’s not a game for the quitters, you have 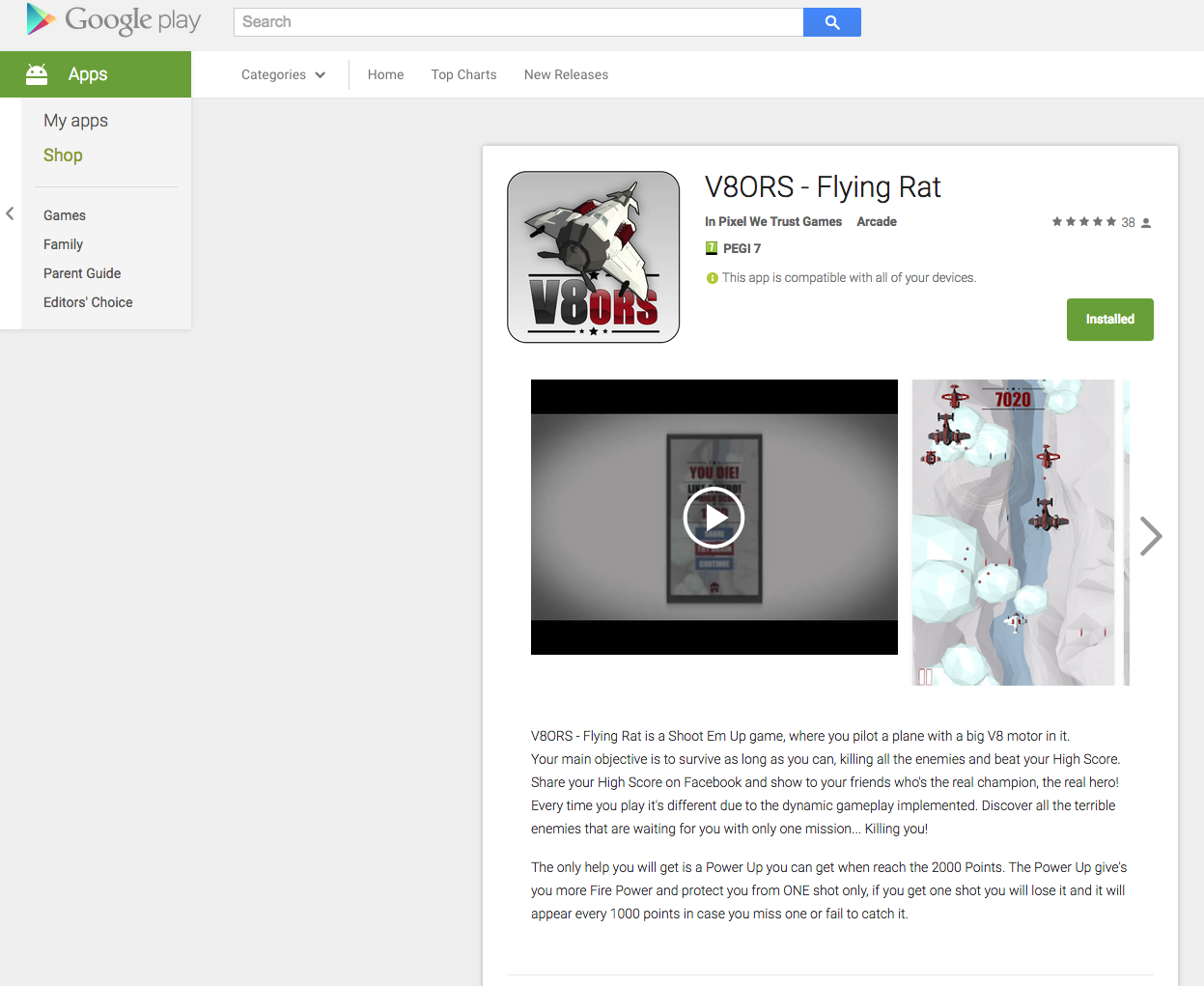 YES, we've made it, now is time to promote it, but that's another battle.

V8ORS-Flying Rat is at the Google Play since last month. The IOS version we are aiming to be released at the end of September.

We hope the game had as many downloads as possible for us to continue the sequel that we have in mind. Some improves as been made since the release, we had to turn more "friendly" to avoid the frustration feeling that the players were complaining, it's a non stop project always trying to improve, finding and resolving the bugs and the gameplay.

It's a simple game, endless Shoot'Em up with lot's of airplanes powered with huge V8's. A dream for a lot of people, we hope. The story concept can be said with a few words, "The World War has begun. . . .Against YOU!!!" your main goal is to SURVIVE, beat your HighScore and your friends HighScore, by sharing it to Facebook. You don't have to make quests or wait for upgrade to complete, it's like the good old days that what matters is the HighScore, been and staying in the HighScore list.

Hope you like the game and spent good time playing it!!

Heres the link of the Google Play:
Play.google.com

We made it! Finally the game is at Google Play Store.

The first Beta version with all the models, and the core of the game is ready and is been tested.

New apparel from the game, Logo T-shirts from V8ORS - Flying Rat. We hope you like them!

Do you want to see the first concepts, updates, the Indie Gogo Campaign and the first 3D printed models?