What is Unconventional Warfare?

Unconventional Warfare(UW) is a top-down tactical shooter where you command a squad full of cute soldiers. Take your time to carefully plan your moves and execute them in a real-time combat. UW also features non-combat systems such as camping and training. Your soldiers await for your orders. Test your leadership in UW!

1925, the Greater Zmeyan Empire has been swallowing nations left and right. In a futile defensive stand you, a military captain, have been swallowed too. The enslaved, the drifters and the dregs will become the makeup of your future squad, united under the goal of freedom. As fugitives trapped within a hostile empire, you and your squad must find escape or suffer death Steel yourself for the upcoming war of survival.

We are a small team of passionate developers wanting to make a fun, quality game. There are two distinct playable modes planned : Dynamic mode and Story mode. Story mode will follow a linear campaign focusing on characters and their stories while Dynamic mode will be focusing on the core gameplay with procedural world and events. We want to continuously improve UW to be an enjoyable game together with our community, so please share your ideas with us. Harsh critiques are always welcomed!

What is Unconventional Warfare?

Hello, reader. For this first article, I decided to give you a little overview of the project, where we stand, where we're headed and what we hope to deliver with this game.

Unconventional Warfare hasn't always been the game you see right now. Originally started in Q2 2017 by my boss with the world's worst username (say hi to gusrbehfdl), it looked like this:

Here is the timeline of this project:

So as you can see, what started out as a primitive 2d game, eventually got to the point where the game's visuals started to look a lot more pleasing. I hope you like grass shaders, because Unconventional Warfare now certainly makes good use of one. 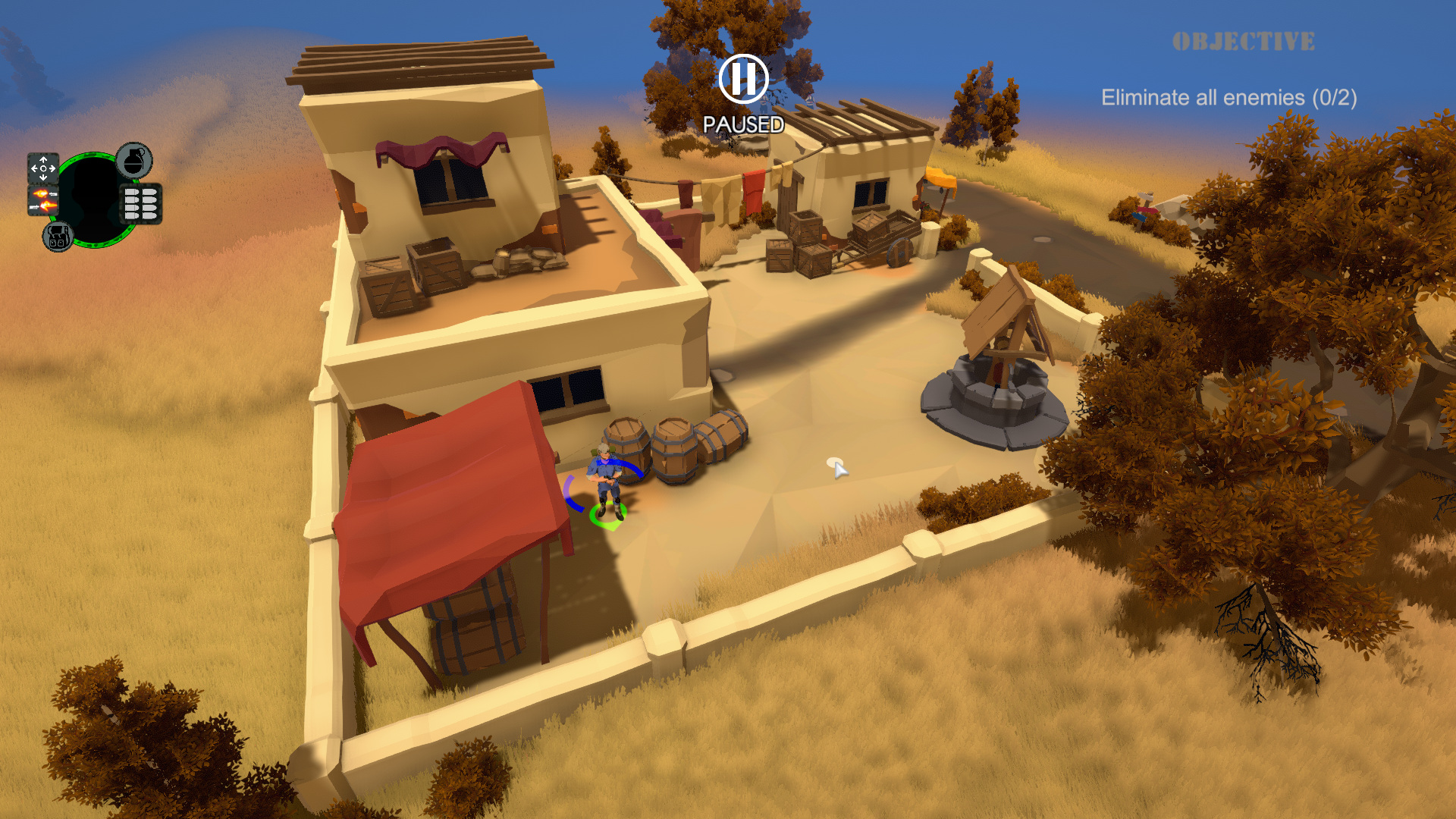 The short version is what you may have already read in the summary: Unconventional Warfare is a top-down tactical shooter. While that's true, it is a little bit broad. I will use this article as an opportunity to go into more detail about what this game is and isn't.

You are in control of a squad of soldiers that is made up of unique characters. 8 characters (main character + 7) are planned right now and we'll take our time to introduce each of them in greater detail in future articles. The game features a top-down camera that you are free to rotate and pan around your squad. This is to ensure you won't have trouble getting an overview of the current situation. We're going for a hybrid real time and turn based system as was seen in the indie hit Faster Than Light. What this means is that while the action plays out in real time, you're free to pause the game at any time and give commands. So it's not quite clear whether calling Unconventional Warfare turn based or real time is more accurate. Time pressure isn't a concern for you, which is one of the pillars of a turn based game as opposed to a real time game. However, there aren't any turns and both the player and the AI play at their own pace. Not having to wait for anyone else is a defining factor of real time games. So whether you want to call UW a turn based game with real time elements or a real time game with turn based elements, is up to you.

Navigation and combat happen indirectly, which is typical for tactics and strategy games. You select some characters, give them the command to go to a certain location or attack an enemy, and they execute it autonomously. Those commands can of course be chained. In combination with the pausing, you could leverage this to split your squad into two groups, give one of them the command to attack an enemy squad, while leading the other group around the enemy to attack them from their flank. This is where the tactical aspect of the game comes into play. You're very much encouraged to pause the game regularly to reassess the situation and give new commands.

You won't spend 100% of your time commanding your squad in combat. Instead, the game is structured into what I'm going to refer to as contexts.

The aforementioned squad based combat is one of them. It happens either on hand-crafted or procedurally generated levels, depending on where you get into combat. The hand-crafted levels are used for important locations as you encounter them in the game's story. Examples would be cities, enemy bases and outposts. If you get into a fight outside of those special locations, you spawn on a procedurally generated map. This is to ensure a great deal of variety in your encounters. The encounters themselves are quite simple conceptually. Your squad and all enemy squads are spawned (with some space in between you, for obvious reasons) on the map and you fight it out. If you win, you get some loot and can leave. Deaths and injuries are preserved, so you do well not to get into too many fights in quick succession, if you're poorly equipped.

The next context is camping. If your squad is hungry, hurt and/or tired, you need to get some rest. In cities you can rest automatically, which functions just as it does in games like the 3d Fallouts. You click on the "Rest" button, specify the duration and confirm. If you're outside of cities and have the required items, you can camp. Camping always happens on procedurally generated maps. Unlike enemy encounters, your squad spawns alone. You find a good location and build your camp. Building your camp consists at least of building a tent, but may also include preparing camp fires, digging trenches and laying landmines. The reason for this is that while you spawn alone, it's not guaranteed that it stays that way and you may have to fend off enemies. To ensure the recovery phase doesn't become tedious, you can fast-forward. We have also planned some camping specific gameplay mechanics to give you something to do with your squad while some of its members are recovering.

I talked about being inside and outside of cities. Moving large distances happens in the world map context. The world map is a node-based map that functions much like the sector map in Faster Than Light does. You have locations that are spread out on it. Each location is connected to its neighbors and you can move one step at a time. Once you reach a location, a number of things might happen. You might get into a fight, you might trigger a quest or you find nothing at all. As you can see on the really early WIP screenshot below, there are big and small nodes. Big (or major) nodes are the special nodes with hand-crafted maps where you can rest, while the small (or minor) nodes are the procedurally generated ones. 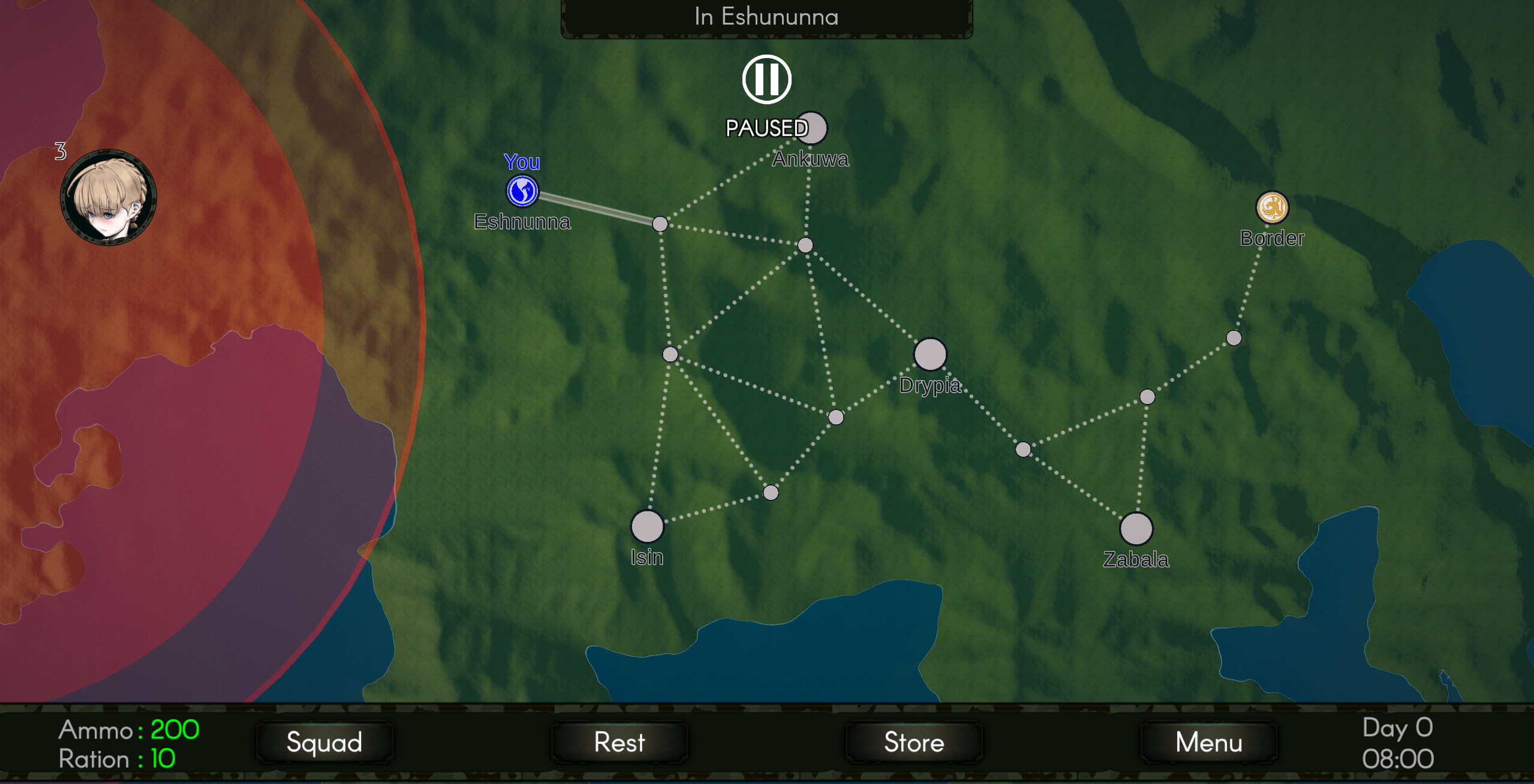 The red reinforcement area mechanic you can see is lifted straight out of FTL and is subject to change in future. More unique and interesting mechanics wouldn't work on this small test map.

The game will have two modes: Story mode and dynamic mode. Let's start with the dynamic mode, as it's our first priority and the focus of the upcoming 08/08/19 demo. In dynamic mode you spawn on end of the world map and have an enemy spawn at the border (which is conveniently located on the opposite end of the map). Your goal is to reach the border, where you'll have to defeat the enemy. Since the main character, equipped with nothing but a pistol, is not enough to win this, you'll have to build up your squad first. There are 30 unique events. These are partially randomized (so you don't always find the same shop with the same items) and grouped into three difficulty levels (10 each). A random selection is spawned on the map when you begin the game and if you reach a node that has an event attached to it, you have to complete it first before you can do anything else. The events might be combat related, spawn quests or stores or simply provide you with a choice. Up until now, dynamic mode reads like a description for FTL, which was intentional (did you know: FTL was one of the main inspirations for UW). UW differs from FTL in some big ways however. There would be the setting (fantasy WW1 instead of space), the aesthetic (anime/cartoon instead of pixel art), 3d instead of 2d, the combat system where you actually fight on levels and some more, which we'll cover in a future article on dynamic mode.

I will not say too much about the story mode in this article, other than that it splices in visual novel story-telling into the core gameplay, which was already outlined. The reason for this is that the story mode is scheduled for a later demo and a later release. Dynamic mode gives us a sandbox in which we can implement the features without having to consider the story and it also gives our writer more time. Needless to say, the story mode as it exists in the outdated v0.4.57 demo will get a major overhaul.

Well, I can't share too much, but I can give you a very rough roadmap.

This shall be it for this article. Follow us for more insights into the development process! If you have questions, ask away.

After months of work and much preparation, our Kickstarter campaign is now live, as is the new 0.6 demo.

In this devblog we'll talk about how tank damage has changed in UW 0.6.

In this devblog we'll talk about the storytelling in the upcoming 0.6 update

Linux version of the demo(v0.7.1.1) for Unconventional Warfare.

Windows version of the demo(v0.7.1.1) for Unconventional Warfare.

Linux version of the demo(v0.6) for Unconventional Warfare.

Windows version of the demo(v0.6) for Unconventional Warfare.

Windows version of the demo(v0.6) for Unconventional Warfare.

Linux version of the demo(v0.5) for Unconventional Warfare.