Tides of War: Letters of Marque

Heart-pounding naval combat with wooden ships and iron men! Take command of your ship and crew to sail into battle with iconic ships from the golden age of sail. Balance your offence and defense to outlast, dismast, sink, board, and plunder your enemies. Challenge your friends in thrilling, smoke filled multiplayer battles or sail solo in missions to challenge your command skills. Become a Pirate Lord in the Brethren of the Coast or hunt down your nation's enemies as the Captain of a Ship of the Line. Earn your Letters of Marque and start your voyage, if you dare!

Take part in large scale battles in both multiplayer and single player naval combat that spans the golden age of sail. Sail iconic ships and lead your crew in sinking, capturing, plundering, and razing enemy ships for King and Country or for your own personal wealth. "Raise the Black" against merchant ships or seize cargo for your nation is varied multiplayer battles that will test your abilities as a Captain, or lead your squadron and test your abilities as a Commodore as well. Manage officers, crew, and specialists to give your ship an advantage in situations and train and keep your crew alive to make sure your veterans can train the latest recruits. Balanced gameplay will give your decisions weight in the fray. Rush in and rely on your heavy armored Ship of the Line or slowly pick at the enemy from afar with your light and fast Schooner. Your play style can be as varied as you want.

Greetings all and welcome to the December Devlog update!

A lot has happened since our last update, and we are anxious to share the results - and plans for the future - with you all.

First off, let's talk about the current build on Itch.io – v0.3 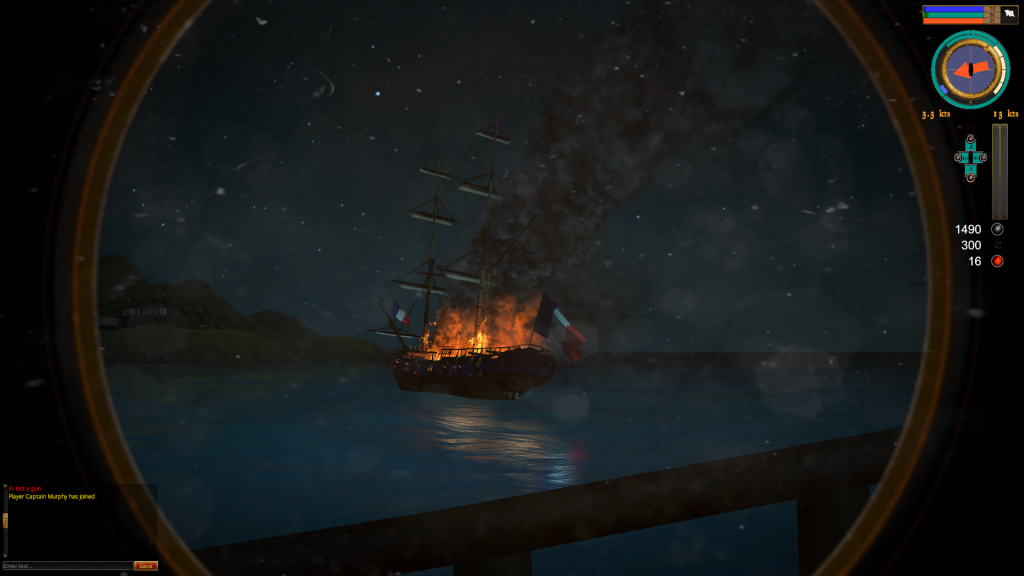 Early November we finally swapped out or old Test Ketches with our test Brigs – Which first of all meant MORE size and MORE firepower! The same model used is the low poly version of the more detailed model that the player will use in the coming entirely new build of ToW – v0.4 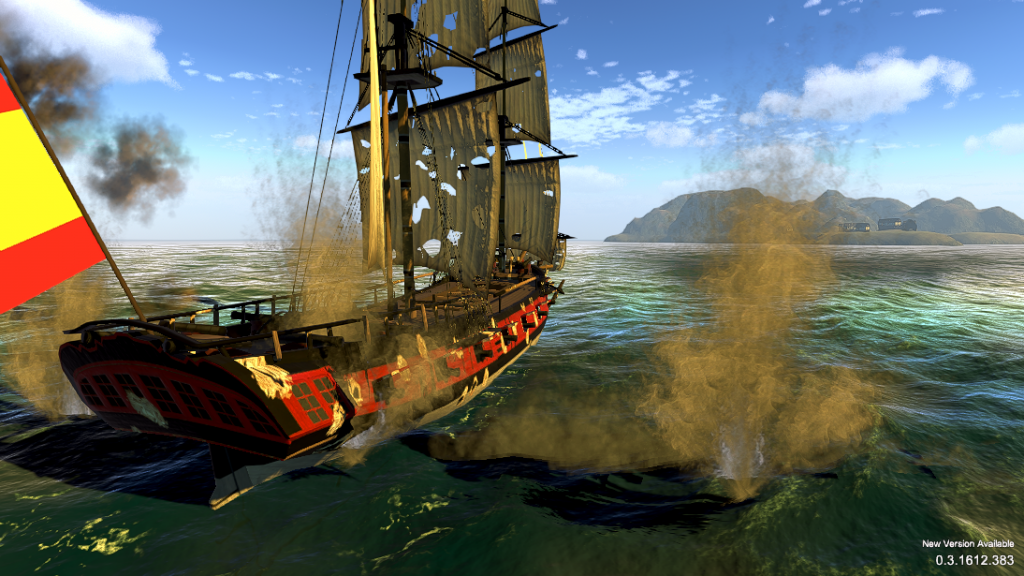 We moved to Itch.io for our releases and updates, therefore making patching and updating clients MUCH easier. Be sure to download the demo through the Itch.io client to keep up to date!

What does Build v0.3 consist of so far? 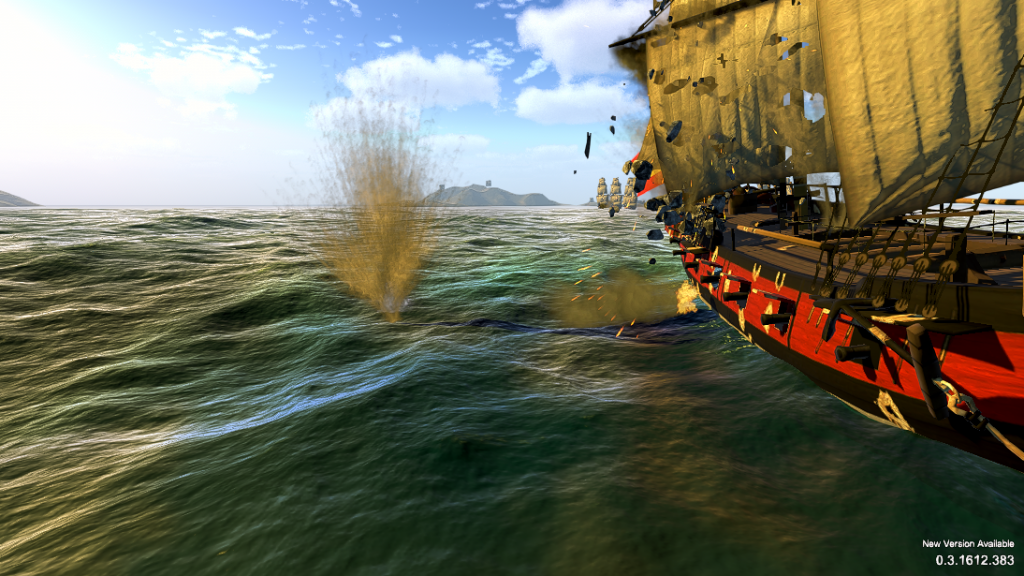 The last week we have also added to v0.3 the beginnings of new incoming systems you meet in v0.4:

In addition to testing it for hours and hours internally, we have also run open servers and tested the current build with many outside testers. And we have also joined privately set up servers. It has been a blast and taught us a lot! Although the build is running smooth and very stable we did encounter a minor Networking issue that sometimes does not allow the player to connect to a server if they have just jumped out of another due to a long running master server timeout. Normally they have only had to wait for about 5 minutes and it was sorted out. Although we have looked into the matter, we are focusing on fixing this bug for the coming .0.4 build.

Should you NOT prefer to play PvP (who doesn't love a good single player match?), and purely want to test your skills against the computer, - or simply want to train and hone your skills before you meet your nemesis - you are of course fully able to set up your own server and play as single player against as many NPC/AI ships as you choose. Or even just spawn ships of any available nationalities you wish, and just spectate the carnage…

That concludes for v0.3 features. We will not add much more to v0.3 in anticipation of build v0.4 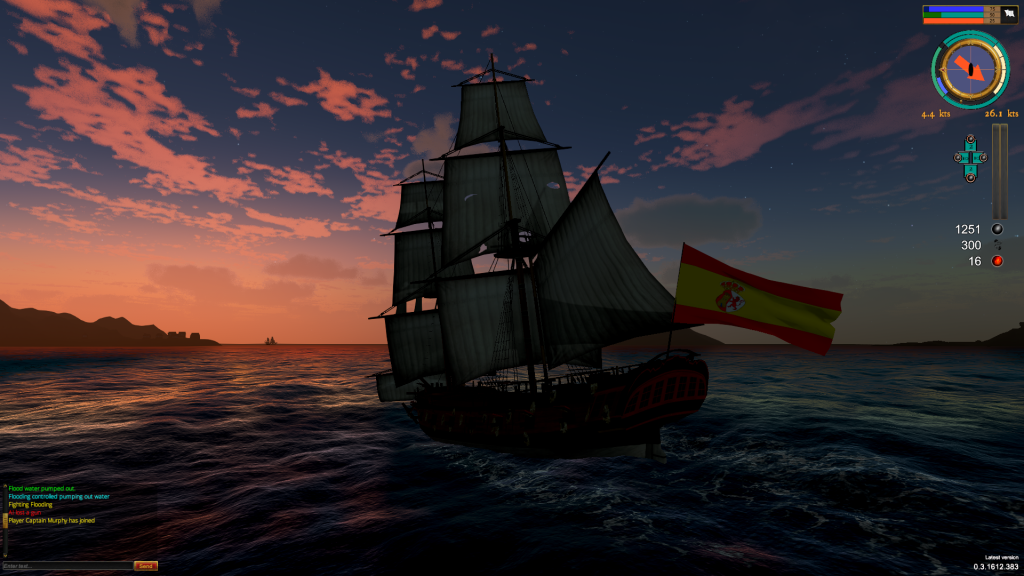 The next build is the biggest update so far and features a completely reworked/rebuilt game with increased performance and vastly improved code, furthermore it will also mark a new milestone for further development as we now will start to put in the finer details such as skill systems, upgrading systems and more. Features that will be added to the existing ones to expand the game to new heights. 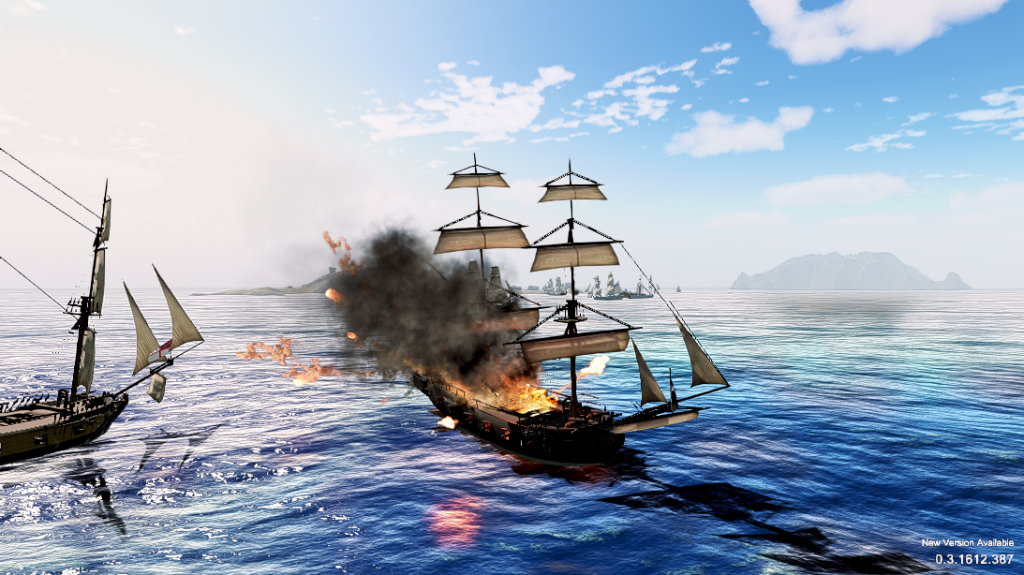 Here are some of the highlights of what's to come: 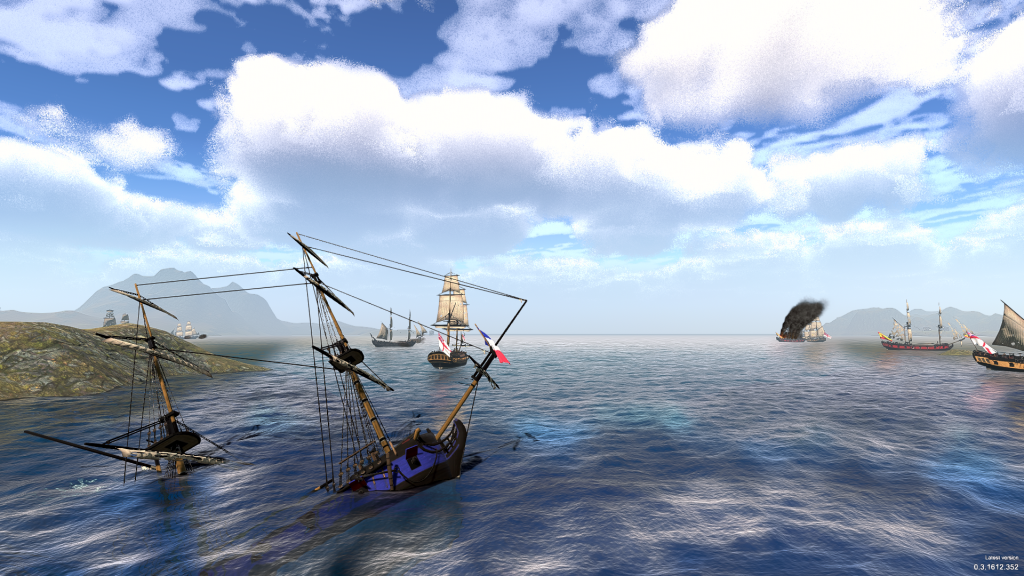 Finally, it is exciting to show you some updated screenshots of the ongoing modelling work. All of these models near completion and consequently will lead to more ships making their way into the game when finalized.

Ships based on known ships, and not 100% accurate copies 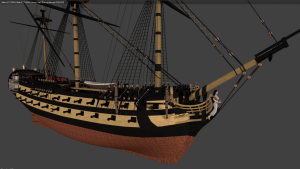 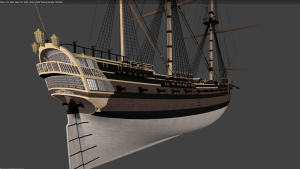 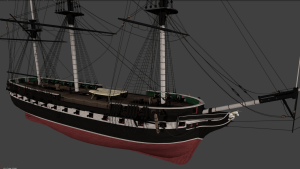 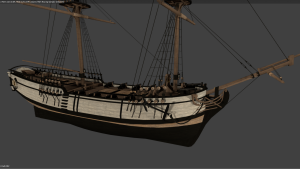 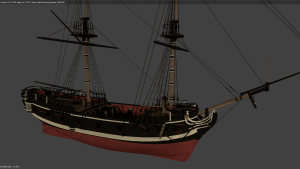 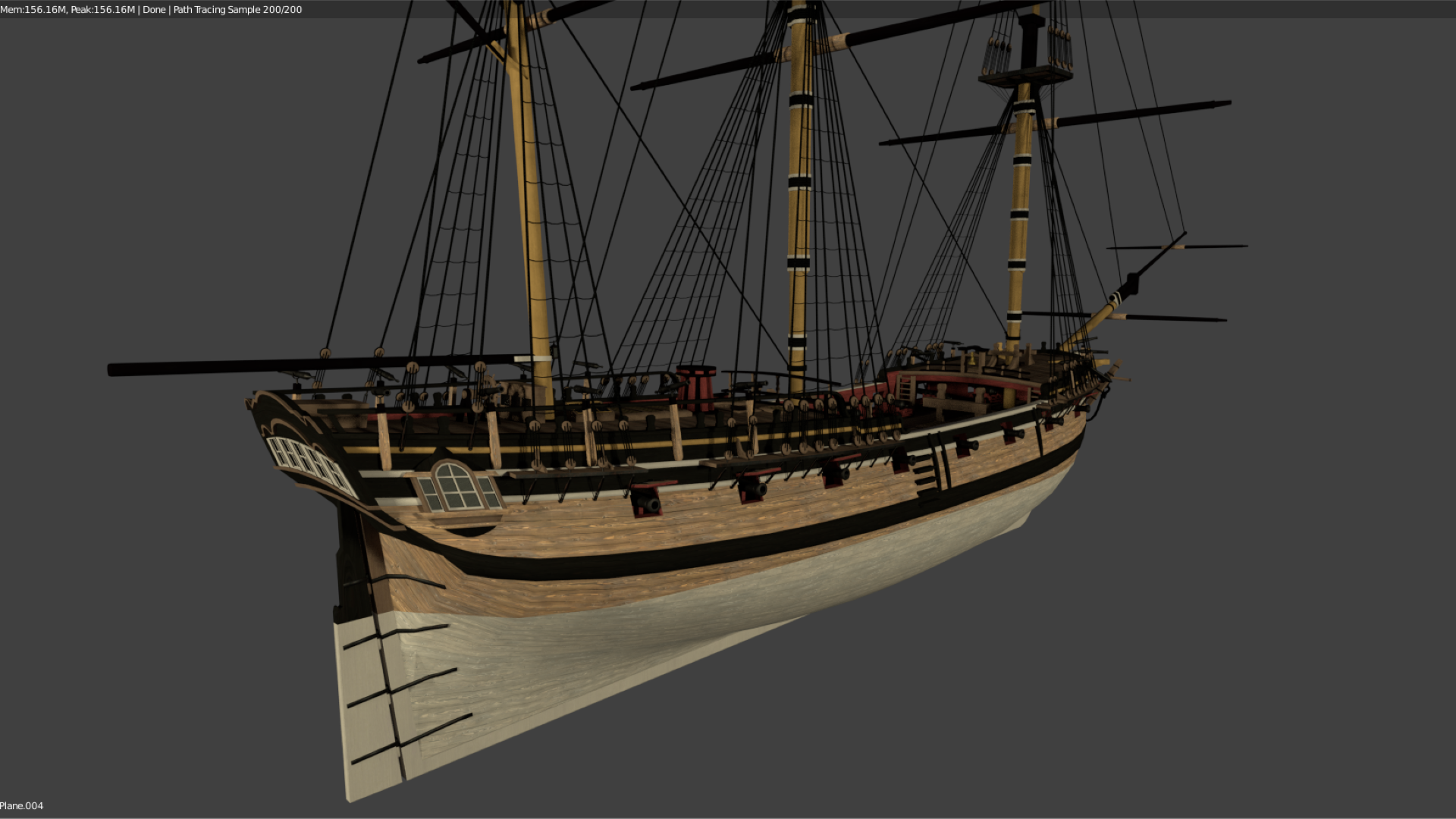 Other ships in the making are:

In conclusion, download a copy today and give it a spin. We look forward to see you on our test servers! Who knows, we might hop in and say hello!

May the winds always be in your favour and lady luck on your side!

Letters of Marque - Year in review

It has been an amazing year so far full of a lot of progress on our latest naval battle game Letters of Marque. It went from merely a concept in June...

It ain't perfect, but it is sure a lot of fun to play! Check it out and download your copy now and get into a server to beat someone else up.

Updated textures, added mechanics, and masts falling all around! Clear for action as we close on our public demo deadline.

Don't use this tool anymore. Use our download at Itch.io

A 1920 * 1080 wallpaper for LoM showing a patrol sailing through thick fog at night.

hope you are still working on this. if so, ill be keeping a sharp eye on it.

We just released our first Windows 64 bit build on Itch.io last night. You can grab it here: Wolfpackgamesco.itch.io

Changed ----
Cleaned up orphan assets from project to keep size down

Oh, it's Captain Murphy, I didn't know you were working on two age of sail games at once

I stepped down as the lead dev for the other game some time back. This is my primary focus and when I get some code that they can use I send it their way.

Version 0.3.16.0102a is available. We corrected a few small AI issues and some disconnect for sails when they are knocked off the masts. 2 more stability changes were also made as well as new particle effects for the cannons.

Version 0.3.16.0101c is now available. There is one known bug with the AI that does not handle a ship being removed from a scene, so after a ship has been sunk you may experience a 'blind' AI that just drives in circles. It will be corrected in the next version.

Twitter
Tags
Embed Buttons
Link to Tides of War: Letters of Marque by selecting a button and using the embed code provided more...