It's been over a year, but I finally finished the new version of Through! I completely rewrote the game in the Unity engine, so now it's got a web version as well that hopefully Mac and Linux players will be able to enjoy. 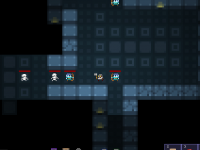 A lot has changed since the last version of Through, but the core vision has stayed the same. This is a simple and approachable graphical roguelike that contains lots of a depth, rewards careful play, and gets quite difficult (especially on the highest difficulty). Some of the items have been removed. Nearly all of the items have changed. All the enemies have been rebalanced to provide a more tactical combat experience where the player will be taking on waves of enemies at once rather than individuals.

If you've never played the game, now is a great time to jump in. I have added simple in-game tutorial messages (that are easy to turn off for experienced players) to get you up and running in no time. Veteran players will find the game has substantially changed from when they last played it, but I think all the changes are for the better.

Please tell me what you think and tell me any bugs you find either in the comments or message me here, or email me at willswannack@gmail.com.

Oh, I found a bug BTW. When I run out of arrows, I'm unable to do anything, but the game doesn't crash.

Dang! A friend reported that bug but I couldn't reproduce it so I of course figured he was crazy. I'll see if I can figure out what's happening. Thanks for the heads up.

Okay, just fixed this bug in the web version. The executable will have the fix when the next build comes out.

Ok, I'll use the web version for now then.

Looks interesting. Taking forever to load though. Maybe think about finding a mirror with better bandwidth?

Not much of a web guy so I'm not sure what the best solution is (though I'd prefer to not spend more money if possible). For me, the download is about 10-15 seconds so it may be on your end (the whole file is about 20 megs). Once you get it, though, your browser should cache it for subsequent visits so it should be faster later.

Huh, it takes me only like 30 seconds to load the web version even though my speed is around 350kb/s.

Great to see this!!!

Well that was entertaining...

Download version.
Human monk, finished on the easiest difficulty on attempt 1.
That was... VERY easy. Only used one potion, for healing, when I accidentally took the stairs before finishing exploration of a floor. Otherwise, the food regen and leveling refill was more than adequate. Didn't use scrolls, other potions or wands, except as alchemy fodder for shields/weapons.

A few thoughts:
Speeding up keyboard movement might be good; while holding shift skips the animation, it still feels rather slow and clunky. (Mouse movement feels far more natural and is much more convenient.)
Is there supposed to consistently be an item in the lower left corner of the map, outside of any rooms?
The different specials of each unit are nicely done. Marauder [I believe? The red guy who kind of lunges through you.] was unexpected and more annoying than expected [in a good way].
Alchemy system is interesting.

The item in the corner is a bug that I haven't been able to track down. It's been happening for a long time, but I'm not sure what the root cause is.

I did build the game with a mouse centric control scheme because that's how I play it. I'll try focusing on keyboard input in a later patch (seems like it would be better for netbooks and players on the go).

Beginner difficulty is intended to be exceptionally easy, allowing people to learn the mechanics in a safe-ish environment. My hope was that people would beat it with minimal item use. I do suggest trying the next difficulty up if you thought it was too easy. Tough is a big step up in difficulty level. If you get a chance to play a higher difficulty, I'd love to hear what you think.

Planar Archer on Insane
Killed off four archers that I started near and... could no longer move for some reason. Could fire, access menus, etc. but movement was unresponsive.

I agree. That truly IS insane. =P

Edit:
Happened again. May be some kind of limit to number of actions before it sets in?

Yeah, sorry, that's a bug in the downloadable version. Happens whenever you run out of arrows. I fixed it in the web version and will patch it into the .exe soon.

Juz try to load the web version and it gif me bad file length error, is it juz me?

It just worked for me. I looked up what could cause that and it says it can happen if the file gets corrupted while you're downloading it (like if a packet got lost). If that's the case, you could try downloading again. You can do this by holding shift and clicking your refresh button.

I found some suggestions on how to use drop box to host which may be more reliable. I will look into doing that when I have time. In the meantime, I hope the hard refresh works for you!

I don't understand something... you pointed about unity and linux users. But afaik there isn't a linux version for unity (at least official). Maybe I am losing something?

Unity works quite well under WINE, also, as far as i remember, currently, webclient for Linux is under development and maybe we'll have it in the nearest future.

My bad, I didn't actually check and just assumed there was a Linux version. That stinks. Part of why I went Unity was to make the game accessible on more systems.

Let's hope we get a linux version then :).