We discuss the work made to The Pedestrian last month.

Hello All!
Welcome to our June monthly update! The first official day of summer is tomorrow, but we’re not breaking out our swimming trunks quite yet. We’re busy working on the ends and outs of The Pedestrian. The game’s development is currently in the middle of beta testing and refining. Many meaningful improvements are being made now based on player feedback, and some lingering systems are being implemented.

What we’ve been doing

Lightmaps! They’ve been a major item for the last couple weeks. We all sat down and worked on a single area until it’s lighting was blemish free, and had the correct lighting structure. There are some minor color adjustments and optimizations that still can be done, but otherwise things are good to go.

Music! Wait this game is going to have music and audio?! You’re darn right! We’ve implemented the first third of the games music and it is sounding fresh. We can’t wait to get the rest of it in.

Baked Specular! Our more recent bakes had lost specularity, and something just didn’t look quite right. So during the overhaul of lightmaps that setting was turned back on. In real life everything is reflecting at least some light, and the way it reflects it gives your eyes some information about the object. Whether it has a glossy finish or a rough look can hint at what the object is made of. So with baked specularity turned on, more objects have baked in lighting information. They reflect lighting and those lights reveal smudges and imperfections on their surface. This helps our objects become more integrated into the environment.

Some puzzle and mechanic changes to make things more player friendly. Many of these came from the last wave of beta testers. Such as sometimes carried objects would clip with stuff and get pulled from you. We made slight tweaks to puzzles for navigation purposes. Our newest mechanic, depth portals, had some really nice usability upgrades, with more communication to the player about what’s going on. Hiding the mouse when it’s not needed. Updating our rooftop hub to be more clear.

Prepped for the next beta wave that went out last week. We updated our surveys, our bug reporting system, moved the save file, and rebaked occlusion culling for the whole game. 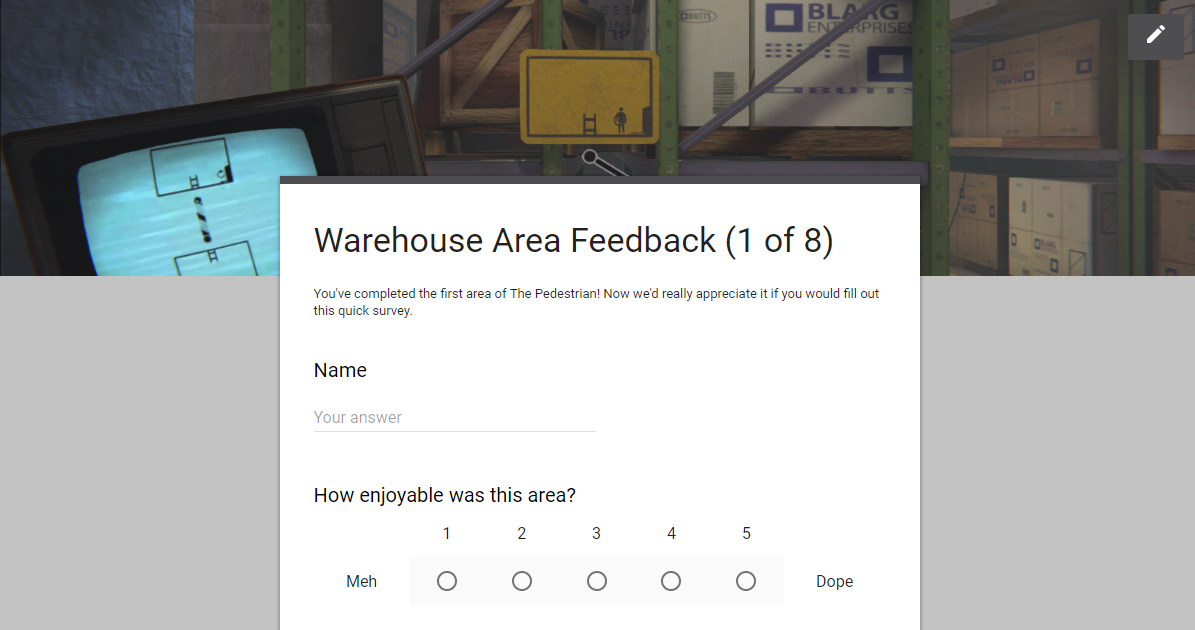 Continued implementation of music and audio! With the first third musified, I think we’re understanding the process a bit more. We’re so excited to hear more of the game.

More story points! The progression and story are in the works. Giving the player reachable milestones to keep them motivated and interested.

Beta testing revealed that our Rooftops mechanic wasn’t as clear as we’d like it. So we believe we have a solution that solves a couple problems, while also making it more understandable.

Some slight gameplay and visual improvements! Things like making nodes easier to connect, having sign contents update before you can see them, finalizing the positions of all our in-game Kickstarter rewards, and making sure each quality setting looks good.

Just wanted to give a quick shout out to the game Luckless Seven. It’s a narrative-driven card game, inspired by Knights of the Old Republic’s Pazaak, with branching dialogue all wrapped up in a 3d world. You’ll have to try their demo out to really understand, it’s been recently updated and you can find on Steam.

Check out Luckless Seven on Steam!

Thanks so much to all the current beta testers for being extremely helpful in improving The Pedestrian. We still have more waves coming so if you’re in the beta tier and haven’t been contacted yet, then you’re likely in a later wave. Hope you’re having a good June and here’s to an awesome summer!

Oh wow! I remember seeing you guys on Kotaku a couple of years back, and loving the concept. Glad to see this game is still alive and well!