The Black Death is a multiplayer survival game that allows you to choose your own path in this dark, medieval land, complete with a diverse population of villagers, wildlife, and plague victims. Create your own story from a range of different play styles - become a blacksmith; defend the weak as a knight; or earn your living as a merchant. The wealthier, the richer, the stronger you become, the better your chance of survival.

Medieval Europe is an unforgiving place at the best of times. Danger and disease are ever present and survival is always a challenge. But now, Europe is witnessing one of it's darkest times - a plague has swept across the continent, leaving a trail of death and despair in its wake. Now people have to fight for scarce resources - the smartest, the opportunistic and the powerful have the best chances of survival. The poorest, the weakest and the most vulnerable face almost certain death.

A catastrophic plague has left a trail of destruction across 14th century Europe. Survivors confront sickness and scarce resources in a land rife with banditry. Attempt to find a cure, acquire power, learn skills and adapt to survive.

Those lucky enough to survive have come to call it ‘The Black Death’.

CAN YOU SURVIVE THE BLACK DEATH?
Take on the role of a medieval man of science, a plague doctor, hell-bent on finding a cure to the horrific plague spreading across the land. Study the effects of the infection through experiments and autopsies on man and beast alike, with the ongoing risk of your own infection - and in danger of being lynched by townsfolk who believe science to be heresy!

FORGE YOUR OWN PATH
Take advantage of different realistic medieval professions: Crafting fine armours to protect yourself from deadly raiders as a Blacksmith, taming animals and farming the land as a Peasant, tricking players with counterfeit goods as a Bandit, and much, much more.

A GRITTY MEDIEVAL MULTIPLAYER WORLD
Embark on a journey through a dark and gritty open-world depiction of a plague-infested Medieval Europe. Witness the plague spread in real-time through the population including your friends and enemies whilst exploring bustling towns, striking castles and plague-infested mines in your search for the cure to this deadly infection. Interact with hundreds of NPC’s; trade with merchants and hunters, clash with crusaders and bandits and be wary of infected beggars.
You don't have to face these horrors alone - team up with other players and work together to prosper or become a menace to the world and take everything you can! But be careful who you trust…

Try to rebuild society by building a homestead by yourself, or with friends. Develop your building skills and turn a rickety shack into a powerful estate, complete with an ultimate medieval research lab to help you perform your experiments and find a cure.

Thanks for voting and helping The Black Death on it's quest to become the 2022 Indie of the Year. You are now in with a chance to score some free games. Help this game secure more votes by embedding the widget (or link) we have included below on your favorite sites.

Greetings citizens of Mercia and welcome to Dev Blog #61!

For this weeks Dev Blog we are taking a sneak peek look into our brand new Siege Machines, important details about V0.26 including when to expect the update, our planned server wipes and info on how to download and access the Beta branch.

We hope you have been enjoying our teasers for our new Building System that is coming in V0.26, more details on when to expect V0.26 are in the next section of this Dev Blog. This week we wanted to show you all what we have also been working on, along side our new Building System, in the form of brand new Siege Machinery, it’s time to get Medieval!

We have three different machines that you will be able to build in The Black Death, these are the Trebuchet, Catapult and Ballista. Each of these feature their own unique animations for firing and reloading as well as having physics too.

These machines will be perfect for assaulting enemy bases and structures that have been built by players from our new Building System. If you see a castle style wall, hacking away at one with your sword just won’t do, one of these machines however would be perfect for the job!

First up we have the Trebuchet. This is it’s firing animation, see how this also has physics on some of it’s elements. Trebuchets were often used to fire objects at and over castle walls. These were much easier to reload than catapults.

This is the reloading animation for the Trebuchet, it may seem slow to wind, but there is a lot of power behind that swing.

Secondly we have the Catapult. This one has a much faster firing speed and animation. Catapults would often fire things such as large rocks, pots of fire, arrows and more at castle walls.

This is the reloading animation for the Catapult. This is faster than the Trebuchet, but does not pack as much power behind its throw, as such it can be reloaded quicker for a faster attack.

Lastly, we have the Ballista. This has a much faster fire rate than the Trebuchet and Catapult! You would not want to walk in front of one of these when it was active! These are great for a constant barrage in an attack.

When will V0.26 be making it’s way to the Live servers?

We are going to be aiming to have V0.26 releasing into a Live status onto our Official Servers on Friday 30th March. This is not set in stone as we cannot plan for issues that may arise on the day of the updates release.

If this date changes we will be sure to post announcements around our Steam forums and social platforms to ensure that everyone is up to date with the status of the release of V0.26.

Why are the wipes happening?

Due to the updates and fixes for our V0.26 update we will have to perform server wipes for all of our official servers (including the EU Mega Server). These wipes are necessary for the new updates and fixes to take effect and in particular the new Building System.

Our new Building System is a complete overhaul and rework of our previous Player Housing system, and as such player and housing data will be completely different as the systems have change drastically.

This also ensures that we can have a clean slate with less errors, issues and bugs from the outset of our new V0.26 update.

What is being wiped, and which servers are affected?

The wipe will clear ALL character saves and ALL Housing Saves on ALL official servers. This includes all unlocked recipes, un-spent skill points, held items, Gold, any owned Houses including Storage Chests and also Player owned Kingdoms.

This will essentially “reset” all our Servers back to a clean slate, and also helps to ensure a minimal amount of errors, issues and bugs.

If you have played on a Community hosted server (which would be any Server that is NOT in our Official SIG Server List) these MAY need updating by the server owner, although this could be done automatically if they are paying for the Server, they will need to check with their hosts!)

Announcing The Introduction Of A North American MegaServer

When we announced our Europe Mega Server originally we were met with an overall good response from the community in their wishes to have one setup for The Black Death.

Since then we have been taking your suggestions, feedback and requests onboard for another Mega Server. We have been discussing this internally in the office and as a team we have decided to announce that we will be opening a North America Mega Server in the near future.

We are in contact with a server provider in getting this setup, when the server is official up and running we will have a formal announcement on our news platforms.

How To Download Our Beta Branch & Send Bug Reports

As always, if you do find any bugs or issues when playing on our Beta Test Server please fill in a Bug Report over on our Google Bug Form, every bug counts! When submitting bugs make sure to always select the Beta option in the drop down when playing on the Beta branch that looks like this “Version V0.26 (Beta)”. 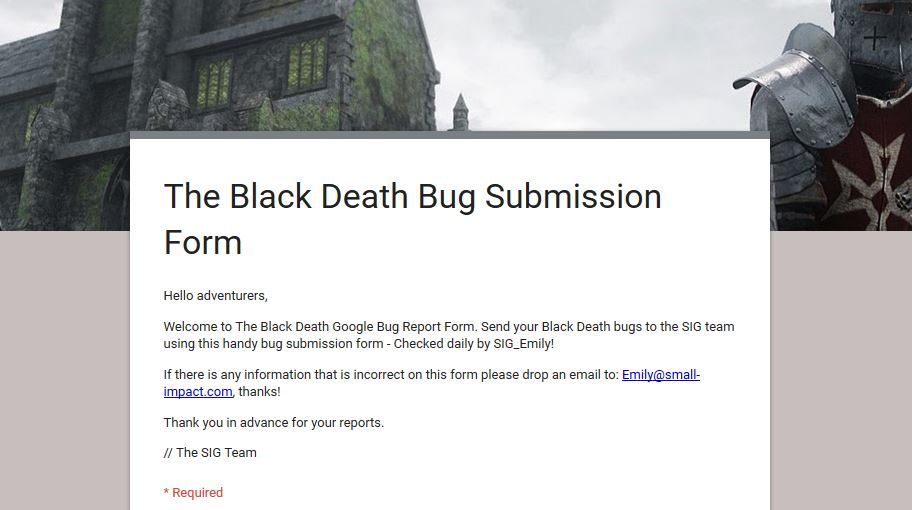 1. Make sure The Black Death is closed and not running.

3. Right click on “The Black Death” and select “Properties”.

4. Navigate to the far right tab that reads “Betas” and select it.

6. In a few moments Steam should start to download the Beta branch of The Black Death.

7. To switch back to The Black Death “Live” build. Simply follow steps 1 through 5 and then select “None – Opt out of all beta programs”

To ensure that The Black Death is kept up-to-date before other games, select the “Updates” tab. Then click on the drop down menu and select “High Priority – Always auto-update this game before others”.

Take a look at the image below. If the title is missing the [beta] you have the “Live” branch installed.

There is now a Google Form that will appear in your web browser once The black Death has been closed after playing. This form will only load in your browser if you have been playing on the Beta branch. 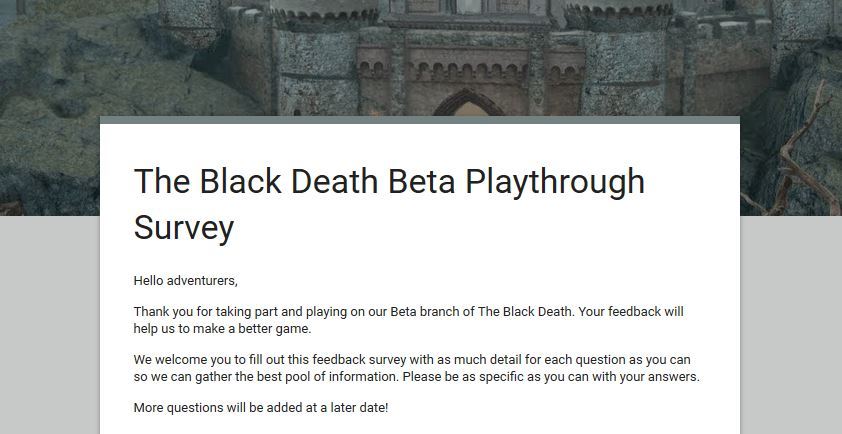 If you have been playing on our Beta branch, when you have finished your play session and have closed The Black Death, a Google Form should open in your default web browser. This is designed to help us gather feedback from your play session on the Beta, and to help us get a clear impression of your thoughts after playing. We greatly appreciate your feedback and suggestions. Thank you in advance for your submissions.

If for some reason the Google Form does not load in your web browser, or if you accidentally close it, here is a link to the form.

That’s all for now, thanks for reading and we will see you next time!

To keep in the loop, follow The Black Death on our social and news sites!

The Black Death on Steam

Issue #6 of our Community Showcase series. This series takes a focus on the Community in the world of The Black Death.

These are the Patch Notes for The Black Death's V0.25 - Attributes Update. Update was released: 3rd March 2018.

Thanks, Sir Peter :) It is indeed an incredible game and community!!