Post news RSS Paper Cowboys Dev: End of round, and the Eagle!

Work is being done to get the first three levels available into an alpha build, and things are coming along nicely!

The first big update is the comic-book-themed end of level sequence. First is the introductory animation, then the boss fight, then a "level complete" animation which includes the list of the players who excel in:

This gives everyone a chance to compete and co-op at the same time! Check out the end of level sequence for yourself in this video!

The only thing missing are the random voice overs of the players and enemy taunting each other. In case you missed it, here are the comic book pages in the sequence. 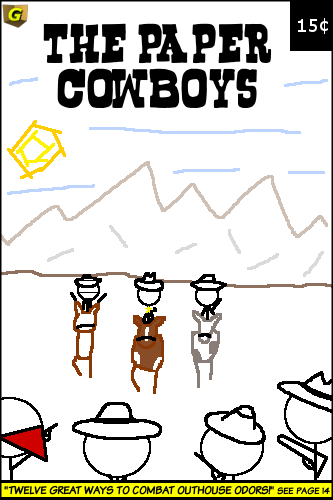 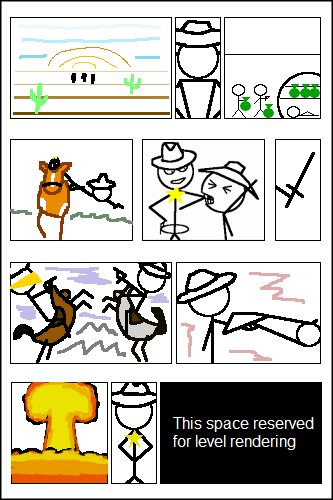 The other update to speak of is the presence of "Secondaries." These are weapon-like objects you use to fight enemies. One of these is a hawk that will chase one specific character and destroy any other characters in its way. This is currently the only secondary that an enemy is allowed to have. Other secondaries that players will be able to use include a lasso, air strikes, a can of beans that make the player...ok I've said too much.

Here is an example of an enemy using the hawk against a player.

If you kill the owner, the hawk flies away. You can also kill the hawk directly. Both the hawk and owner have an equal amount of hitpoints.

The next news update will be more on the technical side of things: Searching for games, "Quick Joins" where the game is chosen for you, and game play balancing through "heat maps" where I instrument the game to report player kills to a central server for analysis. These are immensely important in maximizing the quality of the game experience. Anyone should just be able to fire up the game, join a server in two clicks, and play while thinking "Ok...this time I'm going to beat the game! I can't fail now!"