Introducing Super Helmets on Fire DX Plus Alpha … Why this name, you may ask?

Well, we wanted to call it even longer, but the whole name we thought of didn't fit on the screen. In all seriousness, Super Helmets on Fire DX (for short), is the expanded version of a small mobile game we created weeks ago. And here is what the game is about...

A simple construction worker with a simple objective… save the world.

… This might be a little difficult to achieve though.

Super Helmets on Fire DX is a crazy sidescrolling action platformer game, with lots of nods to old school games, mixed with harcore runner gameplay and a pinch of RPG lite elements.

Add everything into a blender and you get a fabulous Game Shake that we hope all of you enjoy.

You take control The Worker, a simple guy that works at a building site in a bustling megalopolis. But one day, while mining a rock, he discovered a secret that would have better been hidden forever!

The Ancient Evil God, a huge sphinx with the power to destroy the world, wakes up from his eternal slumber and sends our hero into and adventure through time and space, where he will try to save all his companion workers and the world!

In addition we've added a milestone to our calendars, if we get greenlighted we're going to work on a multiplayer game mode, check out the specs!

Play with your friends locally and online in two awesome game modes.

Dash Mode: An intense 8 player multiplayer race where you’ll fight your friends using power ups and skills in order to arrive to the exit portal before them! 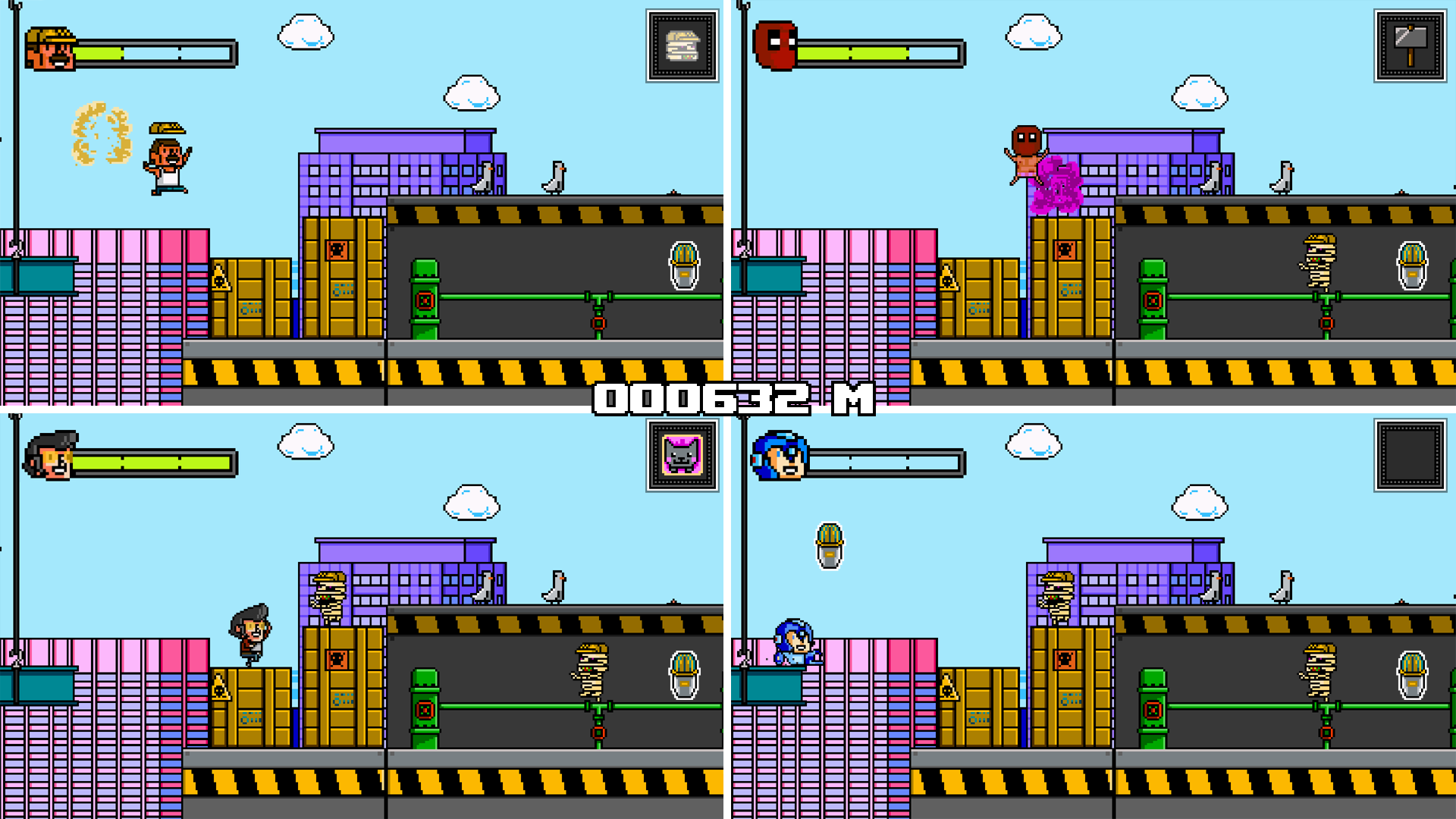 This image is a mock up of the local multiplayer Dash mode and it's subject to change.

Battle Royale: Survival of the fittest, fight to death against your friends in this infinite battle stage to show who is the DEFINITIVE WORKER the winner will be the last one standing!

Our main focus when we designed Super Helmets on Fire DX Ultra Edition Plus Alpha was to create a real challenge for us and the people around the world that love to play difficult games.

That’s why, even when we launched the game on smartphones, we aimed to make it feel like a console game and made it compatible with a controller.

We tried to create a twisted and fun game that can entertain all the family and at the same time be the challenging but fair.

In summary, if you like challenges and simple fun games, you should Up vote Super Helmets on Fire DX Plus Alpha!

We are a small team of friends and game lovers that since kids knew what they wanted to be.

…but that was too hard so we went with game developers.

If you want to get all of our updates (there will be a few!) follow us!

Hope you enjoy our project!

Thanks for voting and helping Super Helmets on Fire DX Ultra Edition Plus Alpha on it's quest to become the 2022 Indie of the Year. You are now in with a chance to score some free games. Help this game secure more votes by embedding the widget (or link) we have included below on your favorite sites.

Duck Fall of the Alligator King

Up In Flames
Embed Buttons

To promote Super Helmets on Fire DX Ultra Edition Plus Alpha and grow its popularity (top games), use the embed code provided on your homepage, blog, forums and elsewhere you desire. Or try our widget.

When Rex's delicious gumball collection is stolen by an evil alien army, he dons his powerful dinosaur costume and becomes the intergalactic superhero...

Duck Fall of the Alligator King

I hope you find this game to be awesome. Please check out our demo, we'd really appreciate it, it's also free. The game has been in development for a...

Up in flames is a 2D game where you control a firefighter who has to save people from a burning building. The firefighter has to jump over objects in...

After the devastating disappearance of a beloved legend, Maxamillion Oinker and his sarcastic robotic bear Tedwin embark on a harrowing journey to find...

Every millennium, a hero must arise to face a challenge so unprecedented that his story goes down as legend. This is not that hero. Meet John Q Averageman...

What happens when DLC practices go too far? An indie developer makes a game that mocks the industry and its foibles, that's what! Defeat the bad guy...