In Tesla: The Weather Man you play as Nikola Tesla, right after Thomas Edison has gone mad with rage about a certain famous hydroelectric dam. Edison unleashes legions of vengeful DC-powered robots, and it's up to you to stop him. Fortunately, Tesla has a few inventions up his sleeve (literally) that the general public never knew about.

With a powerful weather control glove you'll be flooding valleys to short-circuit your foes, levitating boxes and freezing lakes to solve puzzles, and let's not forget lightning!

There's only one way to stop Edison's madness and establish once and for all that you are the true greatest man of science.

Your science needs you!

Thanks for voting and helping Tesla: The Weather Man on it's quest to become the 2021 Indie of the Year. You are now in with a chance to score some free games. Help this game secure more votes by embedding the widget (or link) we have included below on your favorite sites.

It's hard to believe that Tesla: The Weather Man has already been out for two months, and now we've decided to honor Tesla's obsession with the number three by slashing the price to 1/3rd, or [ppbranchg13673smartprice]!


Check out some of the great reviews the game has been getting:

"Tesla: The Weather Man is the most surprising game I've played this year, and for many reasons. It's not only surprisingly addictive, . . . but it's also ridiculously well made for a two man team."

"It's simply brilliant and intelligent fun; wittily written, accessible, endearing, enjoyable and well balanced. It's a credit to the small team at Thoughtquake Studios and some larger, more seasoned, games companies should take a long look at what has been crafted here and learn some valuable lessons about how to get things right." 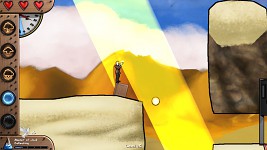 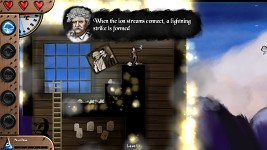 To experience all the weather-wielding, pigeon-jumping, robot-exploding fun for yourself check out the demo or buy the game:

The full robot-fighting, weather-controlling, pigeon-collecting adventure of Tesla: The Weather Man is now available to the masses!

We're thrilled to make it into the top 100 for IndieDB's Indie of the Year contest, and now we want to thank all those who voted for us by releasing our...

Lightning is one of the key features in Tesla: The Weather Man, and this article describes our approach to unpredictable lightning with charged particles...

Get a better taste of our drastically improved game with better lightning, better levitation, and a peek at the third power: rain. Solve puzzles and fight...

We are proud to release our first playable demo of Tesla: The Weather Man! Experience firsthand the insanity of battling Edison's evil robots using weather...

Great game, but I notice that when particular elements (sound files/graphic files) are being loaded for the first time the game hiccups a bit. Do you think that it's fixable by maybe making all the level's elements load before the level starts? I don't know much about game design, just a suggestion! :)

why is this not on desura?

Nikola Tesla vs Edison my dream come true (of course i'm cheering for Tesla because,i don't brag, but he is from my country). I'll try demo...

+1 On the "most linux users would buy this as a reflex reaction just because it's 'Tesla vs Edison' *and* runs natively on linux" comments. Though it's sad I had to find out about this game by accidentally logging in to my windows partition. I need to check if Desura works on linux ...

PS. Ignore the 11-year-old asking for this to be free. Though he does raise a good point; this would make an *excellent* addition to the next humble indie bundle Humblebundle.com (where, again, note how much money linux users spend compared to mac or windows users. You've definitely got a market there!)

As for help for painlessly porting to linux, Icculus.org is a good (and apparently friendly and helpful) starting point, and a personal hero of mine, as he seems to have ported all the best games (indie or not) to linux (and, my understanding is, in some cases, without a 'cut', but rather to promote the OS as a viable gaming system, or just because he felt the game deserved to exist on linux.)

Yeah, Tesla resonates in the Open-Source World. I see Gary Kildall & Dennis Richie as a modern Tesla and Steve Jobs as an Edison. Bill Gates would be Rockefeller. I think if Tesla was alive today, he would be a Linux or BSD user.

I just bought this in a 1UP underdog bundle, If I see one game that's worth more than the bundle, it's an impulse buy for me. But I also see indie games that I want that cost $20 and they'll never go down to $5 that I would pay full price for when my living expenses go down. But I'm a low income gamer and bundles kinda kill piracy for me. I used to be an "I can't afford it now, I'll buy it later" Pirate. Now, I acquire games faster than I can beat them. during my days of piracy, I used to torrent 5 games and not get anymore until I beat them. Now, I have over a hundred games and beat less than 20 of them.

Man guys. i love Tesla. And i think he that westington was murdered by Edison. If tesla was alive, the would be energy in the air that we could harness. The man was a genios.

Tags
Embed Buttons
Link to Tesla: The Weather Man by selecting a button and using the embed code provided more...