Starflight: The Remaking of a Legend

Welcome to the IndieDB page for Marvin's 'Starflight: The Remaking of a Legend' project. This project is a new modern fan remake of the original 1987 PC game loved by many back in the day. Marvin is a veteran professional software and game developer who has worked for multiple well known companies such as Bethesda Softworks and Rainbow Studios, on popular games such as 'Elder Scrolls Redguard' and 'Cars: The Video Game'. As a fun side project, Marvin has decided to use his years of experience to remake his favorite childhood game with modern graphics via Unity. This game is open-source and freely available on GitHub, should anyone wish to help. Playable builds are being released on the project website and occasionally here too.

Blake's Personal Comments:
Like so many great fan projects I've tributed on my Starflight website Marvin had sadly abandoned his work in 2017 due to believing no one cared about his awesome project but in reality the problem was that no one knew about it! Well now people do and after finally getting the fan feedback he wanted in 2017 Marvin is now back working on this awesome project again in 2018! In the second half of 2018 since Marvin's project finally went public the response has been amazing and the project has grown so much. The speed in which Marvin completes parts of the game is incredible. He's implemented a full galaxy of stars and planets, created weather effects for the planets, flux wormholes, alien ship encounters and the very difficult alien comms portraits.

It is our hope that in the future some amazing mods will be able to be done using Marvin's completed opensource Unity based Starflight engine such as a Sega Genesis style mod (as Marvin's work is purely a PC version remake), a Starflight 2 remake, and maybe even a remake of the Starflight 3 Fan Project or Starflight The Lost Colony Project. In the meantime we now have a dedicated IndieDB page here, a Facebook group, a Twitter feed and even an oldschool Forum. So make sure you visit them along with Marvin's blog to check out all the amazing work he's been doing!

If you have any questions, comments, or you just wanna discuss this new fan project feel free to comment here or on one of our other sites!

Dev Diary 1: The Awakening! Starflight: The Remaking of a Legend

Welcome to my Starflight: The Remaking of a Legend project blog!

Allow me to start off by giving you a little background about me [Marvin Herbold]. I used to be a game programmer. Starting in 1996 and ending in 2010, I was a game programmer for much of that time frame. The first company I worked for was Bethesda Softworks. While I was there, I worked on several games, including Battlespire, Redguard, PBA Bowling 2, X-Car: Experimental Racing, and Burnout: Championship Drag Racing. The last game company I worked for was Rainbow Studios, which was a division of THQ. At Rainbow, I worked on Cars: The Video Game, Cars: Mater-National, Deadly Creatures, Dood’s Big Adventure, and several other unreleased games.

So now you know I am a bona fide game developer with many published games under my belt. My specialty is the game engine which includes graphics, artificial intelligence, physics, sound, music, networking, and so on.

It’s been 7 years since I have done any real game programming. Recently, I discovered that Unity Technologies have made their game engine available to hobbyists for free. I decided that it might be fun to get back into game programming by learning Unity. What better way to learn Unity than to remake one of my favorite childhood PC game: Starflight. 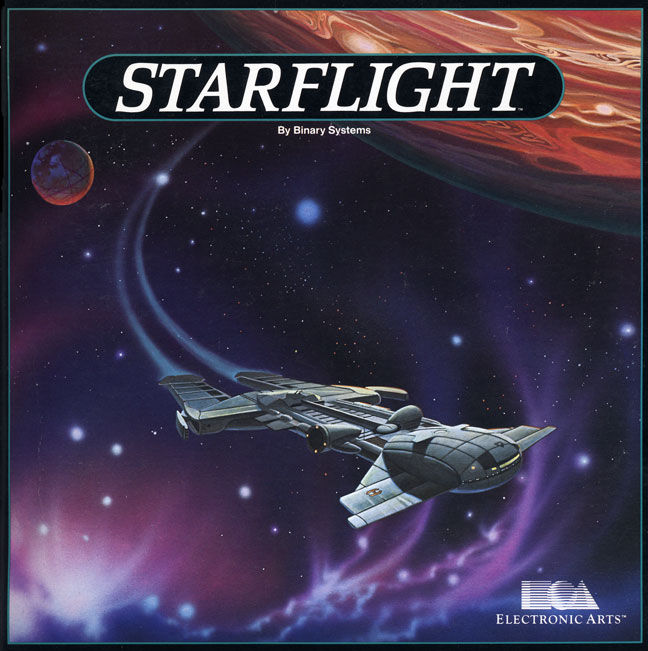 Starflight came out in 1987. I was just entering high school. I was quickly amazed and enthralled by the planet generator that this game uses, and it was the source of much fantasizing and inspiration for me. This game is deceptively simple – after all, it shipped on only two 5 1/4″ floppy disks. I spent many man-weeks exploring the Starflight universe and wondering at the technical aspects of it. I never did beat the game.

So, now that brings us to today and this website. I intend to chronicle my journey remaking Starflight with Unity, and sharing my experiences here. Hopefully, someone will get a kick out of this.

I fully intend to give credit where credit is due for all the things that I find on the Internet that I can use either in the game or on this website. For example, I found the box art image, that is displayed here in this post, at Otherelectricities.com – an interesting web page. This is the exact box art for the version of Starflight that I have sitting on my desk, which I have had in my possession for 30 years.

Next article Marvin begins work on his new Starflight remake project starting with the intro sequence: 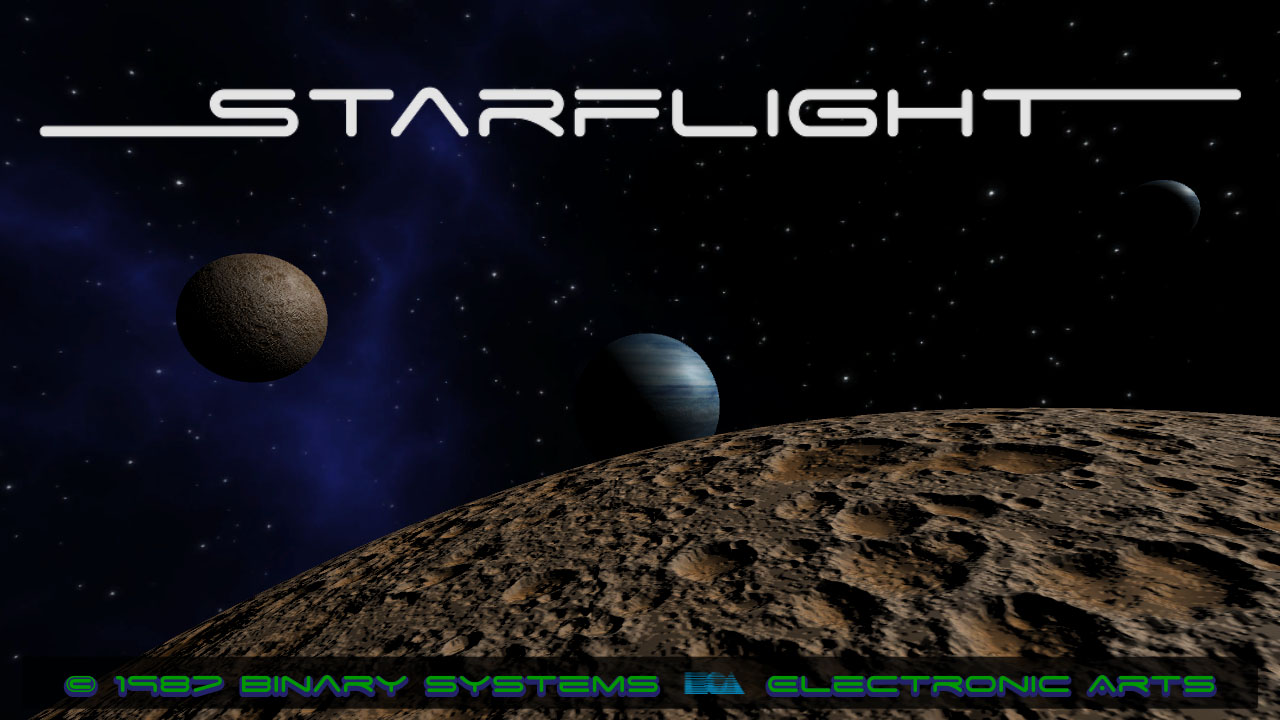 Dev Diary 22 – Fun With Craters in Starflight: The Remaking of a Legend

Bang! We've got another dev diary smashing into our world! This time Marvin makes his already amazingly awesome planets even more realistic by adding...

Dev Diary 21 – Elements, Rocks & Trees on Alien Worlds in Starflight: The Remaking of a Legend

Roll out, we've got another dev diary landing! This time Marvin continues to show us just how cool his new planet surfaces are by adding elements, rocks...

Dev Diary 20 – Exploring Planets in Your Terrain Vehicle in Starflight: The Remaking of a Legend

Buckle your seat belts we've got another dev diary landing! This time Marvin builds us an awesome Terrain Vehicle to explore the surfaces of mysterious...

Dev Diary 19 - Landing on Planets (Part 2) in Starflight: The Remaking of a Legend

Prepare for landing! We've got another dev diary incoming! This time we continue out look at arguably some of Marvin's best work yet as he improves his...

I've been hoping a remake not this game for a very, very long time. This effort looks like by far the best out there! I'm hoping this is still an active project...?

Due to some pretty rough stuff in his real life Marv stepped back from the project across 2019-2020 however he's back working on it again now in 2021. :)

I hope this isn't one of those "started but never finished SF 3" projects
that just gets abandoned for one "reason" or another. because it's beginning
to look like this also...considering the last update being August of 2020...

Actually the project was on hold for much longer then that. I just took my sweet time collating Marvin's blog posts into dev diaries here to err.. soften the blow and reduce the gap.
Due to some pretty rough stuff in his real life Marv stepped back from the project across 2019-2020 however he's back working on it again now in 2021. The proof is on the github page where you'll see he's been up to all sorts of things lately. Hopefully he'll give me some material to use in some new dev diaries soon. And yeah after so many dead projects and disappointments the starflight fan community has had to endure hopefully this will be the first SF remake project to actually hit that finish line. :)

Why am I here? Because Starflight was the best game ever! Been looking for the remake ever since.

Yup! Fingers crossed this will be the first SF remake project to actually hit that finish line. :)

I keep getting stuck in the personnel screen after I train my first crewmen there is no way to advance the menu to create a second crewmen or exit the menu. Am I missing something?

Yup you are haha although I remember getting stuck the first time I played too.
If you're training a skill up you need to hit ESC to back out of training skills when you're done. Then all you have to do is hit the Create button again to create crewmember 2. Do what you need to do with them and then hit create again for the next person. Repeat until you have all the people you want. Then you just use left and right to toggle between created people. Always keep an eye on what's highlighted green. If you're stuck in some sub section area and can't get to the button you want that's when an ESC is probably needed. :)

Sir, will all this eventually be mouse driven?

Hi mate, sadly mouse controls are only in my dreams and not Marvin's as he wants the remake to be as true to the original Dos version as possible.

Others have asked about this too so maybe he'll change his mind one day if people keep annoying him about it but no promises lol.

Indie
Twitter
Tags
Embed Buttons
Link to Starflight: The Remaking of a Legend by selecting a button and using the embed code provided more...