One moment you’re on the beaches of Hawaii soaking up the sun, the next you’re on a cold metal table in a monolithic space station. Your day couldn’t get much stranger.

But then you died.

You are a Spark—a weaponized incarnation of the human spirit—life, death, mechanics, and biology are no longer boundaries for you. You must learn to control your abilities, fight to claim powerful weapons, and learn more about the competing forces that brought you here.

SPARK: Resistance is an online cooperative top-down shooter for 1-4 players currently in development for PC.

Catch a Ride
Hephaestus Station hosts an enormous population of humans on ice, used by its builders to provide processing power. Known as Cores, these vegetative bodies are your ticket out of this place, because you have the unique ability to ride around in them like a high tech meat suit.

What Are You Syncing About?
As a Spark, the boundaries of life and death, of the mechanical and the biological don’t exist. Well, according to the Conglomerate, you also don’t exist, but that’s a minor detail. You can Sync with biological entities like the Cores, or electronics such as station defenses, playing puppet master with anything you inhabit.

You can also Desync, either manually when you’re done with that body, or if your aforementioned meat suit gets fragged. Choose another entity to Sync with while you’re in cyber limbo, or get your friend to requisition another Core for you! 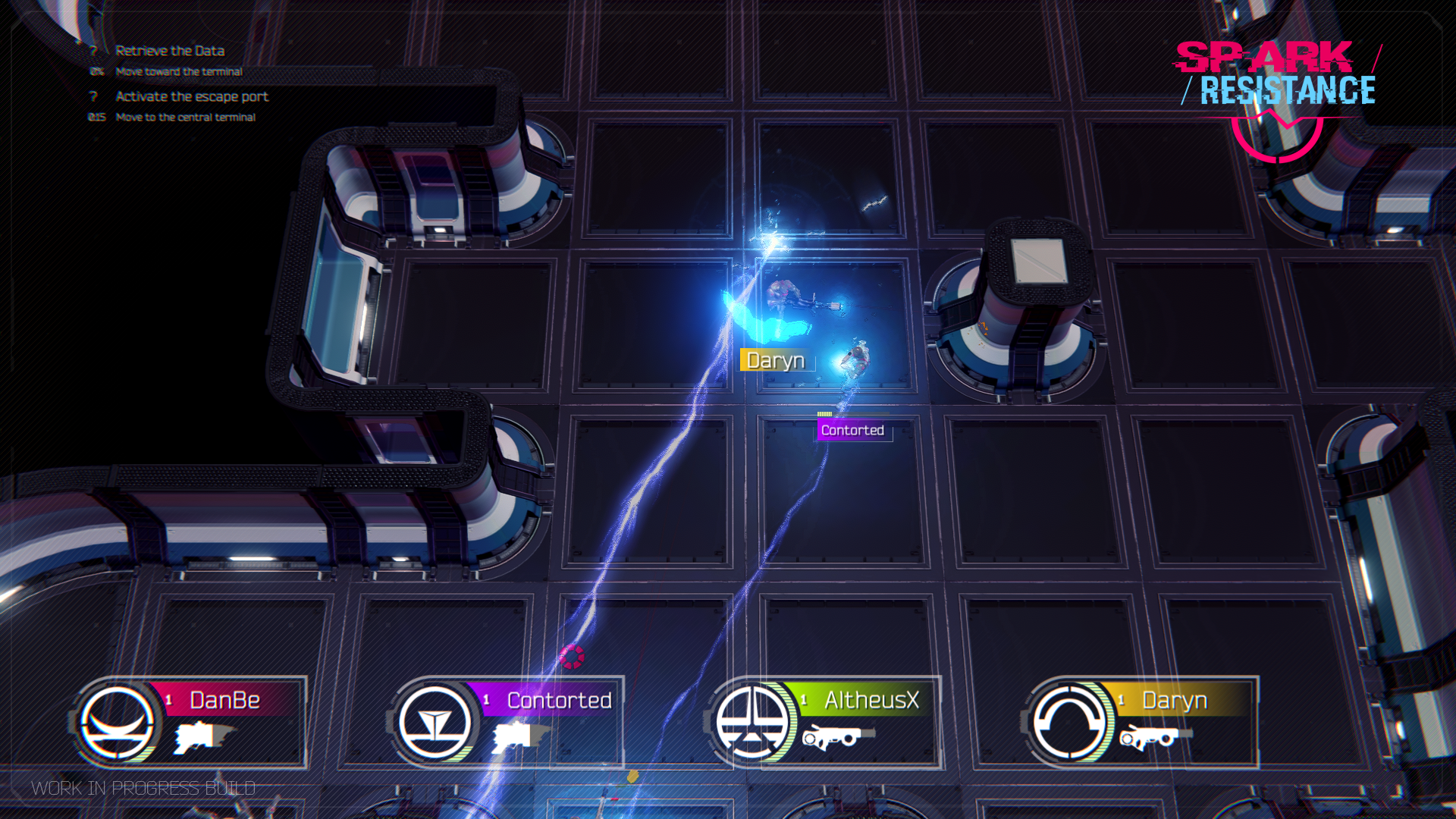 Riding Shotgun
Literally, a riding shotgun: Sparks can Sync with your Core while you’re driving, becoming a passenger with a roster of abilities to deal out damage and protect you as you move. Up to 3 additional Sparks can ride along with you.

Better Luck Next Time!
SPARK: Resistance boasts procedural levels made of both handcrafted encounters and programmatic patrols. You can encounter a different set of objectives, spawns, enemies, and environmental conditions in every Sector you enter.

Corporate Overseers
The Station has been tenuously shared by a group of powerful corporations, each with its own agenda and area of research. To keep things under control, each Sector of the Station is managed and defended by an Artificial Intelligence known as an Overseer. These Overseers are intelligences without conscience and will protect company assets at all costs.

Cores
A countless number of people have been locked away in cryo-pods that span the entirety of the station, and can be called upon nearly anywhere via a series of tubes. While you can commandeer these Cores, the station’s Overseers can also requisition them in bulk when they sense a threat. Cores are only given the most basic of instructions and will swarm towards their target without regard for their own well-being.

Occasionally, Overseers have been known to activate a Core’s failsafe to detonate, with spectacularly effective results.

Security
The Conglomerate’s security forces are a dangerous mix of mercs, murderers, and the latest weapons technology of their backers. They’re used to patrol the corporations’ laboratories and research terminals, and are somehow motivated to protect company secrets with their lives.

Drones
The primary function of the Overseers is surveillance. Through the eyes of their drones they watch each worker, each experiment, each note, every day. If the drone’s scans reveal anything remotely suspicious, a Sector-wide alert is issued and forces are deployed for further “investigation”. 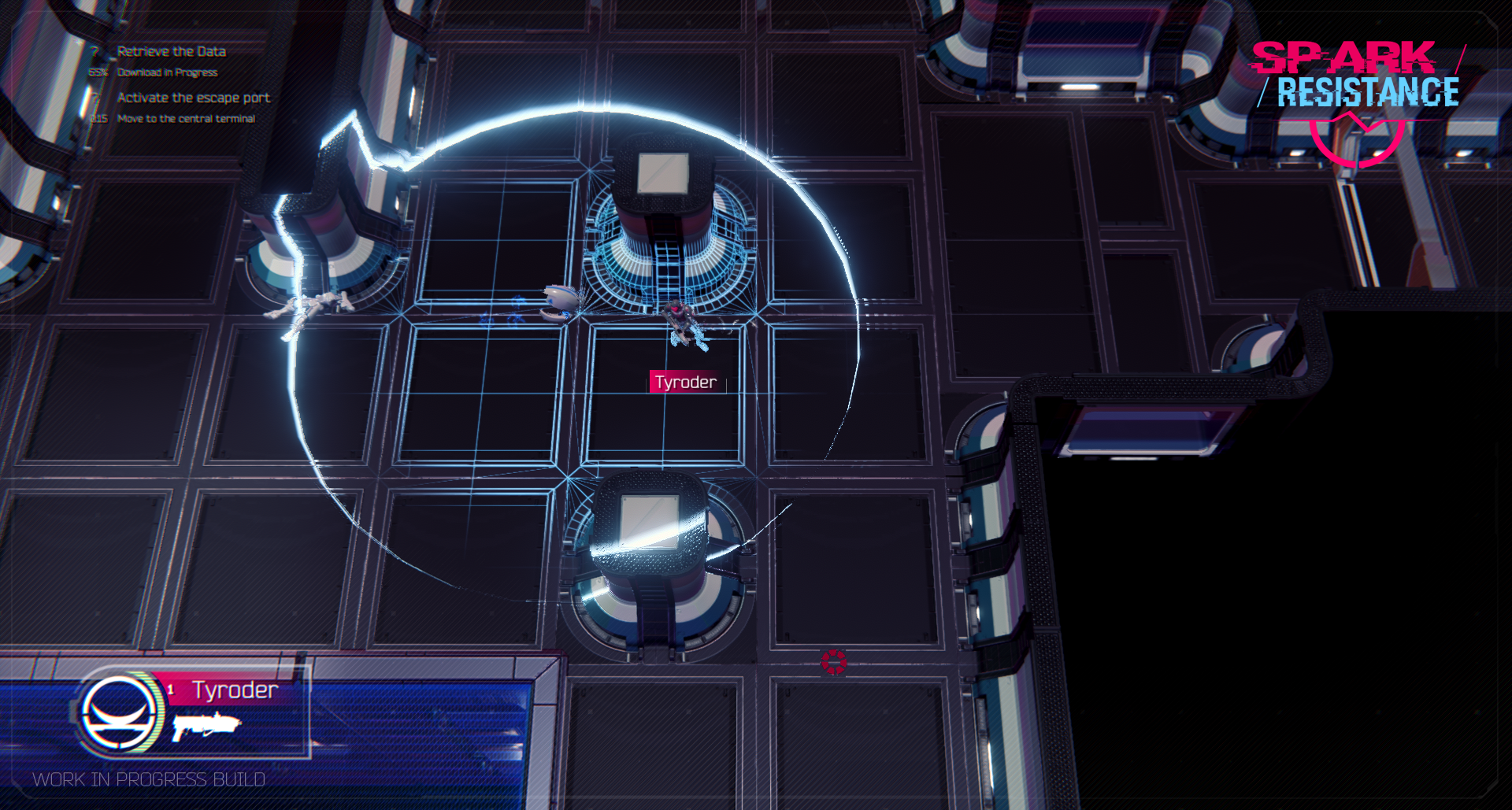 Stationary Defenses
So many corporations so close together guarantees two things: there are more secrets per meter on the Hephaestus than anywhere else in the universe; and more security systems in a given room or hallway than most banks have in a vault. Cameras, security lasers, and reinforced vault doors are enough to ensure most thieves stay away, while the turrets deal with the rest.

Mechanized Defenses
The corporations on Hephaestus Station are among the most technologically advanced and wealthy in the galaxy and nothing demonstrates those points finer than their mechanized divisions. Their experimental tanks and exoskeletons are deployed only in dire situations—but once they’re deployed, the situation is always resolved.

Thanks for voting and helping SPARK: Resistance on it's quest to become the 2021 Indie of the Year. You are now in with a chance to score some free games. Help this game secure more votes by embedding the widget (or link) we have included below on your favorite sites.

A Spark commandeering a Mech

The dev team has been hard at work the past couple weeks, and one of the things we’ve been working on is solidifying Spark gameplay. The Spark is more than just something that wanders around controlling meatsuits; it’s a full-on bioelectric being. As Sparks, you and your friends can interact with Hephaestus Station and its inhabitants in many ways.

Body swap with your friends, hop out to interact with a computer, or even dive into a Core that’s already being driven by a friend’s Spark. Since you’re no longer driving, you’ll have extra to bring an array of wicked cool powers to bear: 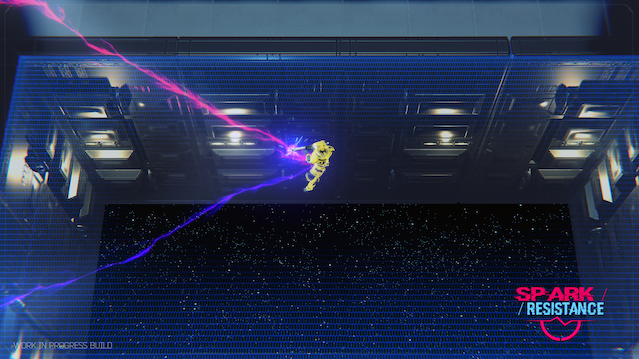 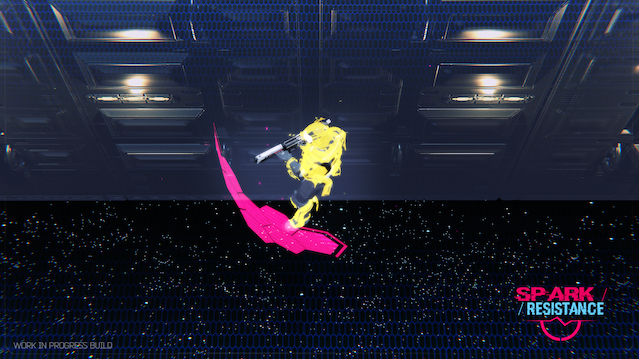 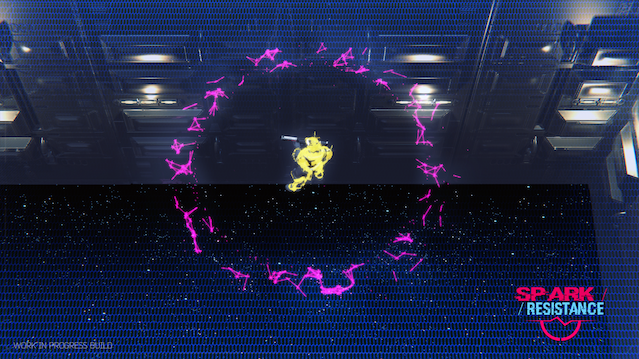 But wait, there’s more! Jumping into Cores isn’t the only thing you can Sync to. Sync with electronics around the space station to really eat through the Hephaestus Conglomerate’s resources:

Death isn’t the end. Without a body—a Core—your options to affect the physical world can be limited, but Sync with your friends and keep on fighting! Or get the Station to dispense another Core from the cryopods so you can have access to your weapons once again. But beware: The Station only has so many of these humanoid popsicles in each Sector, so utilize your Spark to stretch those resources!

SPARK: Resistance is live on Kickstarter and Greenlight

SPARK: Resistance is an online cooperative, top-down shooter for 1-4 players on PC. Now on Kickstarter and Steam Greenlight!