SkylandsDawn is a super exciting MMORTS. In its huge hexagon-based world, consisting of multiple big sky-islands, you will have a lot of possibilities to play out many tactics and you can even do some complex planning for entire conquests with your alliance/clan. One point to ensure our game is always exciting is our combat system. We will implement a simple RPG-system for all units. So you still have units which are naturally stronger than others, but with enough effort you can level your units or use their abilities to the max to counter their weaknesses. Our main goal besides the basic game-play and controls will be the diplomacy and alliance system. It will be possible to have complex interactions with other players, like tributes, alliances, treaties, alliance armies, etc..

*Please note the graphics are only placeholders* 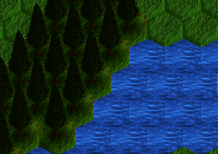 After you finished your tutorial missions in a small extra realm, you will get to the huge main map, which consists of big floating islands. There you will meet all the other players, negotiate with them and fight them in this grand hexagon-based sky-island environment.
For more tactical depth there will be fog of war so you will have to scout your enemy before fighting. Furthermore there will be different terrain bonuses and penalties so your positioning will have some actual impact on combat. When you have taken over an area it will be possible to claim it as your own. There you can build your base, claim resources, build defences and so on. It's also possible for an alliance to claim land to increase their influence over certain territories.
In addition there will be three AI-factions with their own territories and the Executor-faction. The Executor-faction will be our way of dealing with perma-bans, remnant units of events, etc.. The three AI-factions have different playstyles and you can also interact with them through diplomacy.

For better control of the battlefield we provide a tactical map, that can be accessed through zooming out until the view switches. It´s a fantastic overview of the general situation around you, where you can see resource points, the territory of players/alliances and summarized information about the forces of every player. In the late beta stage of the game you can draw plans on the tatical map and send them to your allies.

Like mentioned before, we´ll put great effort in our diplomacy-/alliance-system. It will be possible to interact with other players with complex diplomatic options. Beginning with treaties and alliances ending up with special contracts like bounty hunting, right of passage and tributes. The alliance system allows you to administer your whole alliance on many different levels, from taxes to alliance armies and alliance territory. 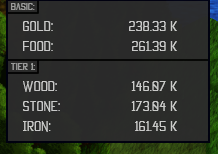 In SkylandsDawn there will be a vast variety of resources, which are categorized in different tiers. Researching new technologies enables you to gather resources of higher tiers, which are needed for better units/buildings. Those units/buildings will replace previous ones and will need much less low tier resources. With this we want to ensure that high level players don´t seize the resource regions for low level players.

We'll implement a research-tree, which is going to have three main races at the end. At the beginning you will slowly work your way up to one of the three main paths, until you have to choose one race at the end. The directions are genetic-, arcane-, and mechanic-research.

As mentioned above, our units will have a vast variety of stats to bring more depth in to our combat-system. It´s possible to raise these stats through research and level-ups. Furthermore, some units have the possibility to evolve at a specific level.

Every building/unit has the possibility to have active/passive skills. Passive skills are for example regeneration or magic-resistance-auras while active skills can be throwing fireballs, training/summoning of units, buffs or heals/curses.

To simplify the controls, complex commands and formations, besides hotkeys we give you a ring-menu. The ring-menu will give you lightning-fast access to all commands. Furthermore, it also makes complex and chained tasks possible. Our main focus lies on a fluid and simple game-play for beginners and pros.

A strategy game can sometimes tend to be rather boring, especially if nobody wants to take risks. Without risks everybody tends to just build their base without much action going on. That's were events come to play. They will range from zombie-apocalypse to king of the hill like scenarios and will have large varieties of rewards, for example unique unit upgrades, resources, research points, etc..

Because there is the possibility for you to get completely wiped out in SkylandsDawn, we will implement a prestige-system enabling you to raise from the ashes of your empire. Therefore, you will be rewarded for your accomplishments before your death. These rewards will help you to get back into the game much faster.

To stop big players from abusing their might and conquering the whole world on their own, there will be an upkeep for every unit. Furthermore, you will only be able to build inside your territory, which you can expand by building special buildings or by other special methods.

Because our game will be online 24/7, we thought of something to prevent players from only raiding offline players. Therefore, we provide you with an offline-shield. It activates when you go offline, but it needs some time to fully charge. This charge mechanic should prevent players from going offline when facing a bad battle situation. Furthermore, the offline-shield only protects your buildings.

There will be a ranking system. Each players resources, units/buildings and actions are pooled together to calculate a score for the ranking-ladder. Additionally there will be a unit-ranking-ladder for the strongest dead units ever, when our stretch-goal is met.

To develop this game we need your help so please support us on: