Sim Hero Classic is an RPG/Simulation game where you manage groups of adventurers & send them into dungeons. This game can be thought of as a cross between an 8-bit CRPG & a typical sports-sim. Sim Hero is the most feature-rich rpg management sim that exists in the world... no, really! Oh, and it's FREE!

Here we are! Another successful design cycle and a massive amount of improvements to Sim Hero.

First, we'd like to thank our Kickstarter backers and others who have helped us shape the game into the best-in-genre offering we have today. Special thanks also go out to Venka who helped me with the GUI changes and so much more - you're a rockstar!

Alright, let's get down to brass tacks.

The final v2.0 featureset is in place and it includes the first "top end" castles we planned to add to Sim Hero. Each one is not only the visual centerpiece of your settlement, but provides unique benefits. 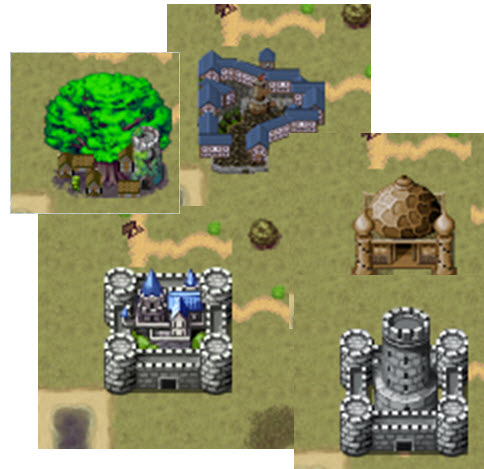 Choosing the Crafting Guild as your palace, for example, will increase crafting skill in your settlement: 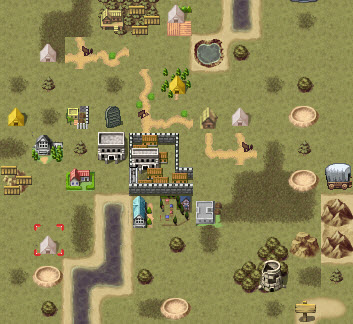 We do hope to expand upon this list of epic castle upgrades in the coming months, as we have a TON more castle ideas and graphics to match.

Full patch notes are below, but the other major feature of note is the "Statistics" feature which we stealthed into v2.0 right under the wire. It wasn't planned (we didn't hit that stretch goal from the Kickstarter campaign), but it was just too darn important not to try and implement. It's not where we eventually want it (with a "hall of fame" leaderboard), but it's there and working: 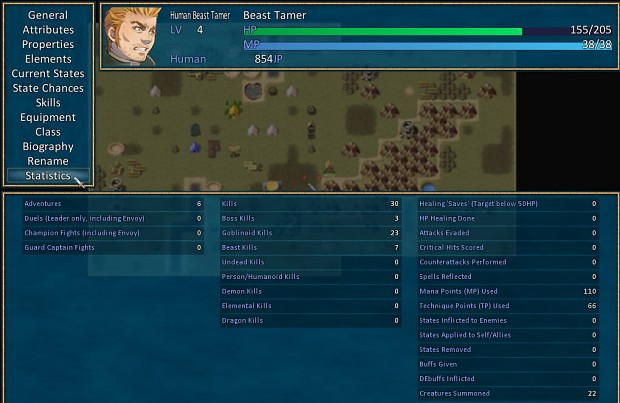 Head on over to the Downloads section to grab the FULL game for FREE and let us know what you think on the forums.

Sim Hero boasts oldschool gameplay and over 82 different classes (which results in over 6500 different class combos with multiclassing). Heroes develop as they adventure across their 8 primary attributes (raise & lower). Heroes can also be sent for training, possibly learning 1 or more of the over 60 unique talents and/or developing their 8 primary attributes further.

With many, many hundreds of skills and thousands of pieces of loot -- almost any imaginable character is possible in Sim Hero, and some of that development will be "organic". Death is permanent but glory lasts forever! Happy Adventuring...

- Added a "Take Action" command to the castle. Once per event cycle, you may take a special action here as your monarch (gain xp, gain jp, etc).

- There's now an option to dismiss heroes from service (it's in the Monarch Actions).

- Added an "Envoy Action" which is available from the Embassy once per event cycle (like the Monarch action). You may send your leader or champion on a diplomatic mission to a race you've met. They will try to assist that neighbor diplomatically (with their WIL), but if that fails they will need to fight. Good way to get XP, Relations and sometimes valuable trade goods.

- Added a "Statistics" screen to the Hero Status menu. Here, you can see how many kills the hero has, how many adventures they've undertaken and so much more!

- Added more events... many more events. Some events that were added were specifically to help with the early game, such as wandering heroes potentially joining for free!

- All 4 watchtowers are upgradeable now, allowing for a built-in +4 total defense (to lessen the need for as many guards)

- Added a Potion of Forgetfulness which can be found in dungeons. Unlearns all skills on a hero (except XP Boost).

- MOST villagers yield double the output now, to speed things along

- The SHRINE reworked to allow you to pick a patron god(dess), craft holy symbols and perform miracles (it was tied to a rare unique event before - no longer!)

- Basic attacks now only give 1 TP instead of 5. TP is now primarily gained thru the new "technique" system.

- Adventure times greatly reduced - your parties will now return home more quickly than ever. This effect is greater on lower level dungeons.

- Increased the chance for "unique" events to happen, added/changed a few

- Crafting Badges cost reduced by half. Split into Tier 1 & 2 classes. Guard hall now has an extra upgrade level to accommodate.

- For "battle" events, the following changes were made:
--- Buffed the effect of your Guard Capt. defeating the enemy leader. (ie: it gives you a larger bonus now towards winning those types of events)
--- If you lose, Happiness can be lost as well (later gamestages only)
--- If any of your guard villagers survive, there is a chance for a War Hero to emerge and join your hero ranks
--- You can lose more than 1 guard during these events, even if you win (though winning and the guard captain can reduce this chance)

- If an event is "due" while you are in the menus, the heartbeat will pause until the event is handled

- Random shield unequips (if it's still happening, try to let us know what dungeon you were in)

- Fixed Battle Event victories which were causing undue pop/resource loss (it'll still happen, but it wasn't meant to be that common)

- XP and new heroes don't show up IMMEDIATELY on the HUD (you might need to wait a few seconds). We'll get that fixed.

More info on Sim Hero v2.0. In this update we share screenshots from the new tileset, crafting, the GUI and the all new Technique system!

A few screenshots and thoughts from the development of Sim Hero v2.0!

Including eight major art & content additions/revisions, loads of stretch goals and community-involved development - Sim Hero is about to get bigger ...

New Artwork on the Way!

Sim Hero's initial Kickstarter raised funds for some artwork, most of which has been implemented. At the tail end of the funds, we had a grand idea to...

No need to patch the game if you are already on v2.0.4

Patch Notes in the Forum This patch is likely incompatible with previous save games.

In the latest release 2.03 its all the time pausing the time-progression. Its not game-breaking but really annoying. You always have to click on some building, leave the dialog, so that the time progresses again... Hope this can be fixed soon.

If you can narrow down what's pausing the heartbeat, that'd help. Thanks for playing!

Hey there! This game is great, I like how there is a dual system in place, so you can focus on either city-building, dungeoneering or both!

Hello i just wanted to comment to say.
I really like this game, i came in search of a game that was similar to WiiWares My Life as King.
and this is the closest i have come so far,
i absolutely love this game, however i do have one or two things i think need addressing.
Firstly, i cant resize the window, and due to my current screen resolution, it sits rather awkwardly behind my taskbar, so perhaps that could be something to work on.
Also, i think the system of gathering materials over time is fantastic, however it could possibly be made easier to see time passing, perhaps just a digital time readout somewhere on screen, and perhaps on the mainscreen have a guide for how to play the game.
i mean it was easy enough to figure out but it would just be nice anyways lol :)
Other than that this game is fantastic and i cant wait to see future updates and take part in watching this game develop :):):):):):):):)

Win8, smooth run, no errors. Tech Tree was easy to follow. The quiet ambience of the music suited. Its only a personal taste, no critique, I would enjoy either a larger map area or a scaled up tile size. Good luck with your project.

Glad you're enjoying it!

The map grows to 8x the initial size through exploration - have at it! :)

I just want to come here and put down a thank you for developing this game. It is great and it has given me many hours of fun!

Just love the combination of rpg x management game!
So excited, keep up the good work!