In a wondrous land, full of magic and mystery, a mysterious darkness begins to engulf the world, and a great and powerful evil called ‘Maniakal‘ reveals itself as the source of the chaos and destruction, transforming the land and twisting the creatures into dark and sinister versions of themselves. To combat this ominous force and impending doom, an assembly of the most powerful elemental mages from citadels of magic across the world is called forth to determine a course of action.

The result of that convention was the decision to build a mighty golem, towering some 20 feet tall and constructed of the strongest materials known, to house the full force of the combined wizards power. Built to withstand incredible damage and to deal the same, forged by dwarves, elves, and wizards alike, and imbued with the mightiest magics imaginable, the golem would then march into the heart of the Citadel of Darkness to confront the source of evil, and destroy Maniakal at any cost.

The dark force behind the world’s corruption was not without its spies and in learning of the wizard’s scheme, sent powerful entities to interrupt the ceremony and destroy the golem before the mages could breathe life into it. Maniakal itself, would lead the charge.

Chaos ensues as Maniakal and the forces of darkness set upon the Citadel of Light, wreaking havoc and destruction. The mages, sensing danger, finish chanting and harnessing their power, chaining their combined elemental magic into a concentrated ball of crackling energy. The large oaken doors to the chamber crack and bend inward BOOM! The room shakes. The mages continue to focus their energy between them… another BOOM… more cracking, more bending, the very frame of the door appears to buckle under the strain and the room shakes again.

The loud drone of the mages voices reaches its crescendo and, just as they launch the ball of magic toward the golem, the doors to the room split wide and pieces hit the floor. The force of impact from a large piece of debris inadvertently causes a large polished shield to detach from its mount on the wall and towards the base of the golem, causing the deflection of the mages’ cumulative magic into a pillow located on a bed in the adjoining chamber, with no apparent effect.

The mages stand aghast in horror for only a moment before turning to face the dark and sinister force flowing like liquid death into the room. An acrid miasma fills the room and Maniakal drifts into the Sanctum of Convergence. The tower quakes and the elemental mages encircle their foe, each of their elemental familiars poised beside them ready to strike and the room erupts into a fierce magical melee. Dozens of ink-black elemental tentacles explode from the writing mass of darkness below Maniakal’s corporeal form and mages are hurled against the floor and the walls. The tentacles of darkness, almost possessing a life and intent of their own, snake around from every angle, binding and enveloping the elemental familiars, and stabbing into the bodies of the mages who find themselves powerless to defeat this unknown form of dark magic.

During the fray, the mage of elemental light is hurled far back through an archway into an adjoining chamber, gravely wounded. In the scattered haze of torch flame, smoke and motes of magical energy amidst the chaos of battle, the stricken mage watches helpless as the invasive darkness pierces each victim in turn, while Maniakal throws his head back in triumphant hollow laughter. The mage attempts to sit up, noticing as she does so, that one of the pillows on the bed beside her now sits up as well, blinking and very much alive. The obviously confused creature shuffles to the end of the bed, seemingly trying to figure itself out, and appearing quite unfazed by the commotion as the light flashes through the choking smoke and the sounds of magic ring out in the next room. 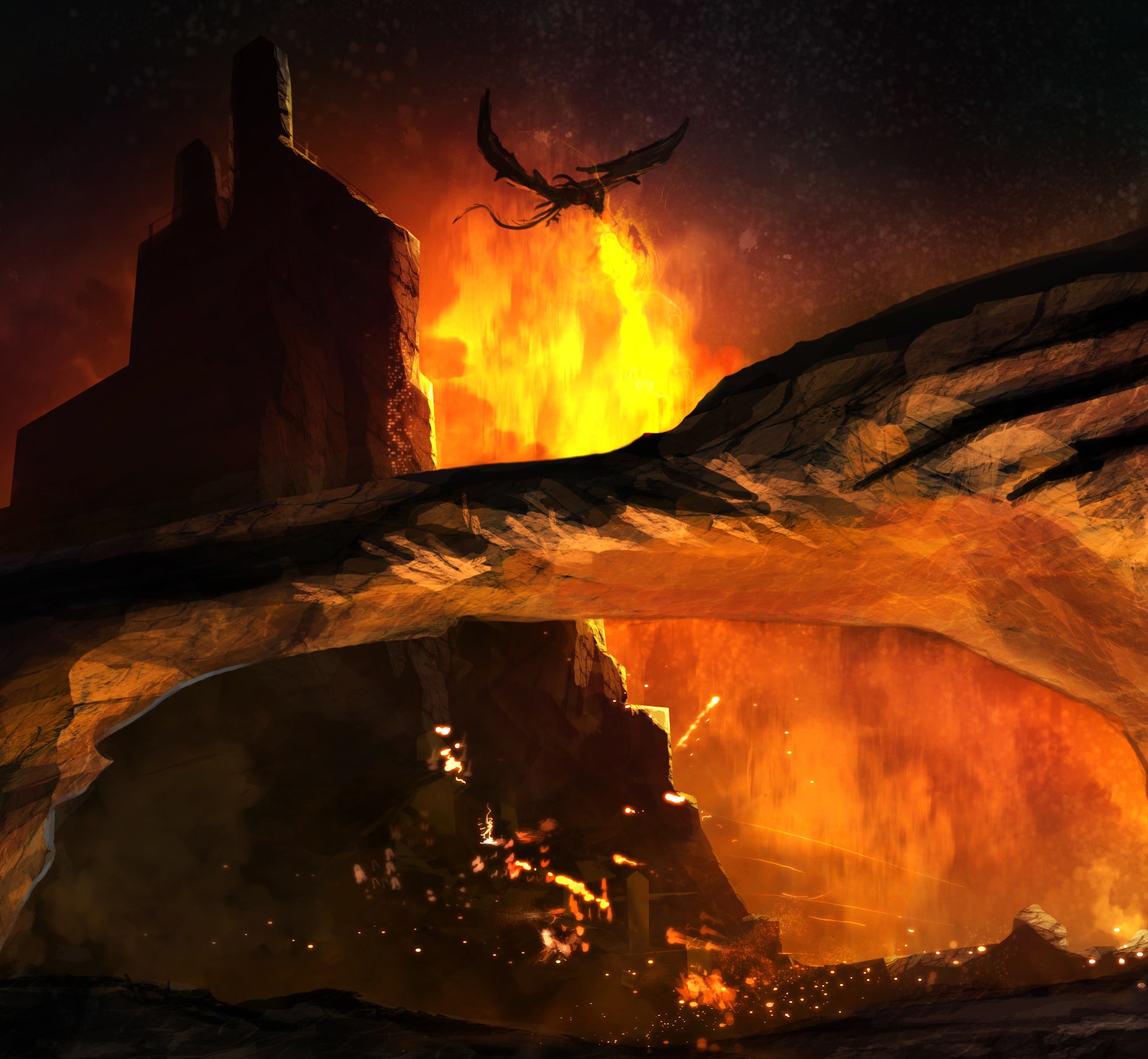 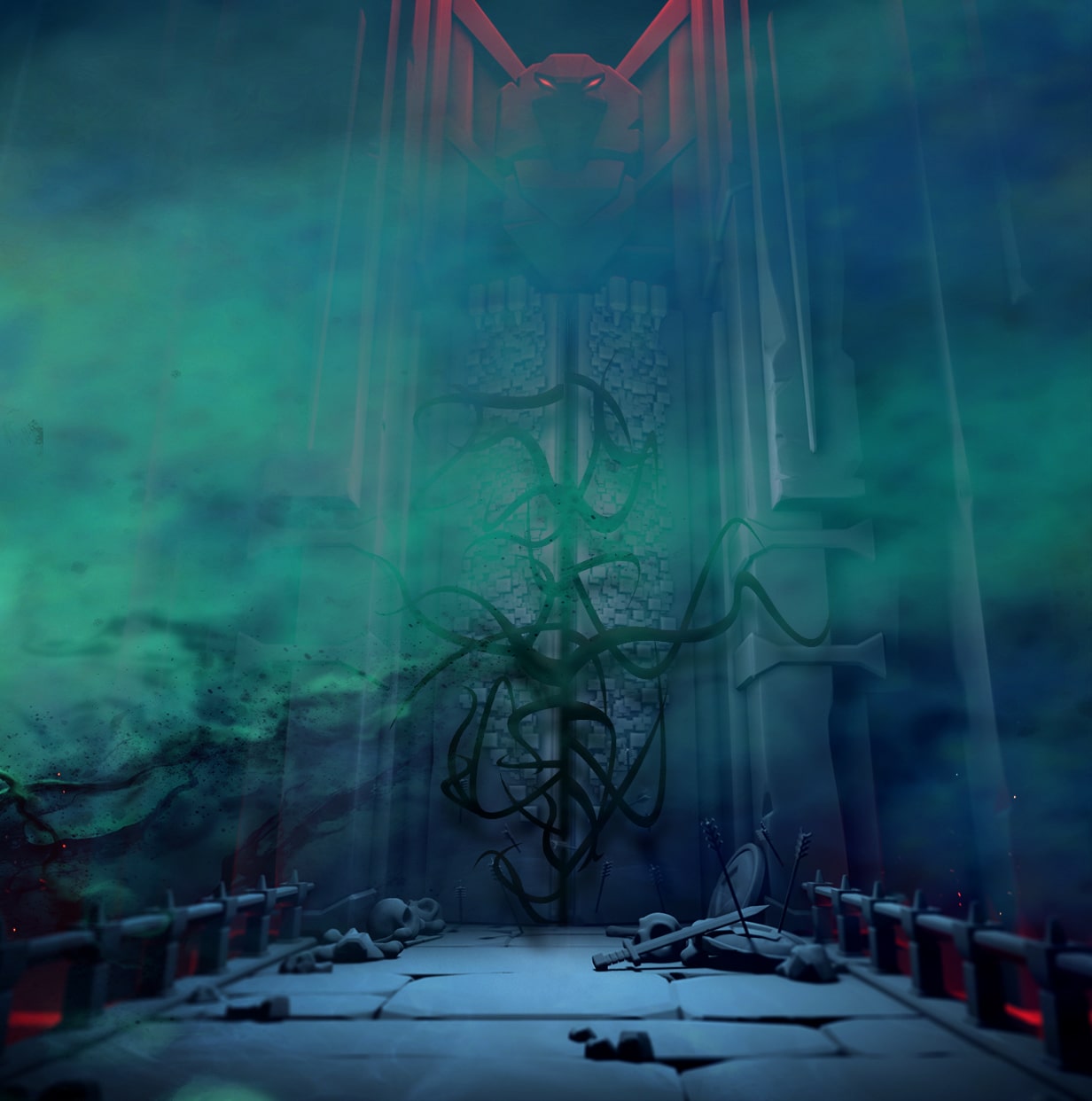 At once, the mage of elemental light knows what has transpired here, for she senses the great strength of elemental magic within this being.

The mage beckons the creature forward. “Please”, she says. “Do not be afraid.”, and she beckons him to come closer. “You are the last hope of light in a world descending into eternal darkness”. Another blast of powerful magic rocks the chamber, and stones and wood beams snap and crumble from above. Another mage falls, and the darkness begins to fill the room, creeping into the adjoining chamber.

She continues, “We’ve not much time left, little one. You must heed my words.”

A blast of magic flashes in the next room and a billow smoke drifts across the ceiling into the adjoining chamber as Maniakal engages the fifth and sixth mage. It does not take long for the first of them to fall.

The mage of elemental light looks desperately at the bewildered pillow, “You must gather your strength and defeat Maniakal and his horde, or all will perish.”, she continues as more debris falls from the ceiling, “You may be small, but you possess incredible power. Use whatever weapons or magic you can find, to drive back the evil that invades our realm. It is the very purpose for which you were created.”

The pillow looks down to either side, acknowledging its apparent lack of inability to wield anything. Another section of ceiling falls, revealing a gaping hole in the roof and the night sky beyond.

“Ah, yes”, the mage nods. She looks around for a moment as a flash of magic and acrid smoke from the room nearby chokes the area. Then, under great apparent strain, she levitates a pair of gloves on a nearby desk to float in circles over Sak’s head for a moment before snapping down into place at its sides. The pillow, looking quite surprised, stares down at his new appendages, turning his hands over in front of him before turning his attention back to the mage. Another scream from beyond the room, and the sixth mage collapses, his spirit torn from his body.

Maniakal begins to drift toward the adjoining chamber tentacles ahead of him crawling over every surface. The tower begins to shake and everywhere sections of roof are falling. The floor is collapsing in places and intense multicolored flames rise up through swiftly-forming cracks in the floor. The mage of light, sensing the imminent danger, quickly turns to the slightly confused but very determined-looking pillow. “Save our world… your world.” She gestures toward the ceiling as tendrils of sparkling light swirl up and around him, forming a ball of light which swiftly contracts before launching, with the pillow in tow, out of the growing hole in the ceiling.

The mage of elemental light slumps back, and then turns her gaze defiantly toward the door as Maniakal finally breaches the room. He glowers at her for only a moment before curling his long black fingers up into a fist as sharp-looking tendrils of darkness flow up into the room, up and around her, piercing her flesh and tearing her spirit, and the crystal necklace, from her body. A ghostly, wraith-like form rises from the mage as her body slumps to the floor, lifeless.

Maniakal turns and drifts calmly towards the entrance side of the room, where a magical gateway appears, and he strides toward the portal glancing around at the mages drifting around the room. “Do not despair, my brothers and sisters. I’ll not abandon you so quickly.”, Maniakal laughs evilly, and drifts through the yawning mouth of the portal. The tentacles of darkness too, retract back through the gate behind Maniakal, and dragging the wraith-like spirits of the mages into the gate with them. The gate snaps shut with a crackle of dark energy and the echo of Maniakal’s laughter fades. The tower begins to collapse.

Several leagues away from the battle, a high-pitch scream trails in from high in the darkening sky and the pillow lands, heavily for a cushion of any kind, in the canopy of a dense forest, crashing through several branches to land in the clearing below.

A large break in the trees to the north frames a tragic scene of fire and destruction as the Citadel of Light collapses in the distance. The pillow struggles to stand and turns to watch, awestruck, as the top half of the citadel collapses into the lower halls, detonating in a massive flash of light. A low rumbling tears across the sky as storm clouds coalesce overhead and a light rain begins to fall. The flames and clamor of battle in the distance fade swiftly in the growing darkness as night closes upon the realm. The pillow, confused and alone, staggers over to a dry hollow in a large old tree nearby, curls up inside out of reach of the rain, and falls asleep.

The pillow awakens the next morning to the sound of birdsong, wearily crawls from the safety of the hollowed tree and examines the surroundings. Butterflies flit by and sunbeams dance through the leaves on the dew-covered grass and across the colorful flowers dotting the edge of the clearing.

The ruins of the citadel still smolder on the horizon, and the pillow without a name sets out on the adventure with a sense of wonder, leaving the solace of the clearing for the forest and the unknown beyond.

To promote SAK'D and grow its popularity (top games), use the embed code provided on your homepage, blog, forums and elsewhere you desire. Or try our widget.

You are a new graduate of the Craftsman's Guild, an organization devoted to ensuring the mechanical prosperity of every town and city in the country...

RE-RELEASED! Join orphan Klim in his journey through the dense, enchanted forest in search for his missing sister in the wonderfully atmospheric indie...

Bloom is a vertical slice pitch demo for a game, produced as part of a course at Futuregames Academy in Stockholm, Sweden.The demo was developed by a...

Epistory immerses you in an atmospheric action / adventure game where you play a girl riding a red giant fox who clears out an insectile corruption from...

Treeker: The Lost Glasses is a first-person adventure game, with platform and puzzle elements. Find the legendary glasses to solve the puzzles, and uncover...