In Rogue Invader, YOU are the invader attacking the alien horde in this genre-flipping roguelite shooter. Game-play resembles 1-Bit black and white old-school games, with modern touches and HD graphics.

Twenty years ago, the Zenos began invading Terran colonies, leaving a trail of death and tears in their wake. Terrans fought back, one planet at a time, while building a fleet to stab at the Zeno home-world.

You arrive with that fleet, just after a series of massive space battles in which all supply ships have been destroyed. You are left with a huge invasion army but no supplies to invade with other than one drop-pod, and one pistol.

Your standing orders are clear: END THIS WAR! 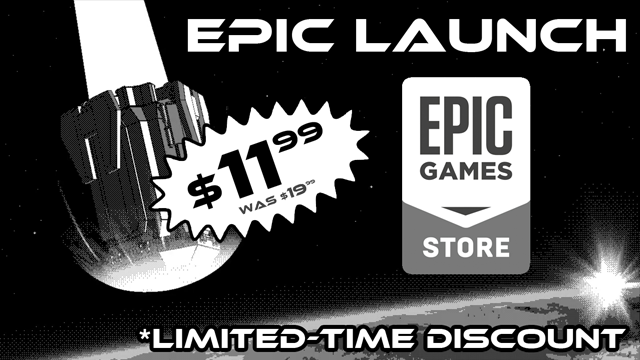 There's no better time to drop in (pun excruciatingly intended)!

To celebrate our official launch on the Epic Game Store, we've added a limited time LAUNCH DISCOUNT. In addition, we've made a ton of bug fixes and balance adjustments to make it even easier to drop in, but keep the overall challenge. Take the fight to the Zeno horde on their home-planet and END THIS WAR... one space marine at a time! 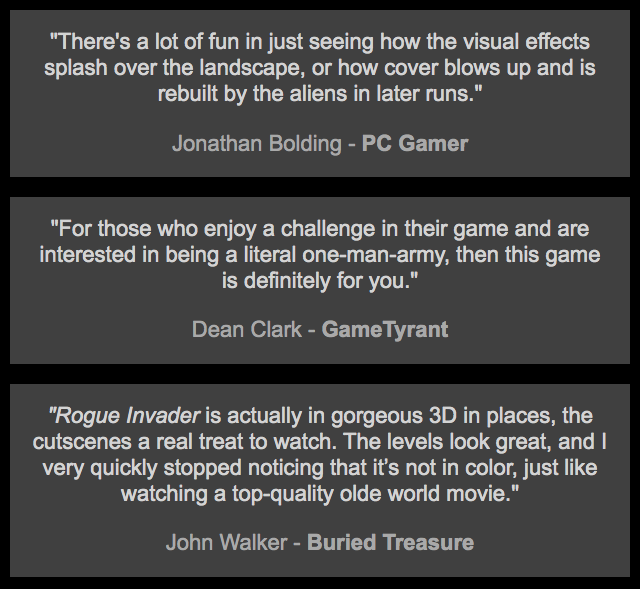 We hope you find it a fun retro challenge! 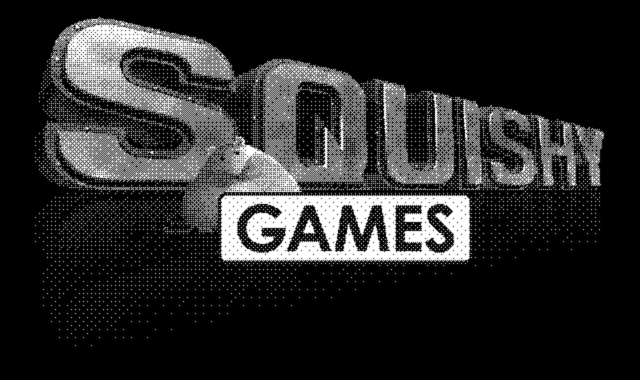 King Zeno is laughing at the response that Rogue Invader is too hard. We have bad news for him, we've made a TON of balance changes. King Zeno is now...

Rogue Invader has officially released, and is available on Steam!

We have an official release date for Rogue Invader (for realsies this time). We can't wait to get you all invading!

Rogue Invader has a demo in the Steam Game Festival! Check it out and let us know what you think! Being a small indie team, we've also had to push back...

This is a demo we provided to press contacts during the first week of August. We present here for you to play and try during our Kickstarter push.

Fantastic game and best of luck!

Just FYI, we took down the demo for the time-being. The game has changed so much (for the postive), that we felt it was unwise to continue to have it available. We will post a much-improved demo by 10 August.

Keep an eye out for extra news as well. :)

We've got some SICK stuff waiting for the right date to tell you.

Hey, you're awesome, thanks. :) Looking forward to full release in fall 2015

Wonderful and striking visual presentation, to say the least. I really like the aesthetic you guys are going for, and the gameplay seems like it has a lot of potential for customization of the experience. Best of luck!

And, don't hesitate to send us a message via IndieDB's message system, email us at marketing@squishygames.com (both of us use that email), or leave us a comment right here. We love to hear from you and want to tell you all about what we're doing.

Thank you so much for passing by. Leave us a comment and tell us what you think! (Teaser coming soon)