Rogue Empire is a innovative Roguelike game with a rich twisted story and infinite replayability. It will spawn a huge world, a growing number of races and classes to play, lots of secretes and interesting new mechanics this type of games can potentially have!

Please support my development at Patreon.com! Would be a huge help!

Some of the distinct features you can expect from Rogue Empire:

Thanks to your support Rogue Empire is Greelight!

And if possible support it at Patreon.com

Incredible how time passes! With this update Rogue Empire is almost ready to be out of early access! Looking back at the road map 95% seems to be finished.

On the other side there are a lot of optional features I regret won't be seeing the light of day on release... still they will eventually :D

By the way, don't forget to cast your vote for Rogue Empire in the Indie of the Year 2008 contest here at IndieDB! Being in the Top 100 is amazing, but lets push it further! Even if Rogue Empire is not your thing, I would encourage you to check out all the great games in here!

Anyway, this update bring Legendary Items and Item sets! I am so exited for these as they are very unique one of each other!

Lets see the details on what was updated!

Added more than 30 legendary items/gear! You will find several little Easter Eggs on them!
At the moment you are guaranteed to get at least 1 legendary item from the first boss you kill. After this the loot chance depends on the amount of legendary items already acquired and the source of loot. From higher to lower chance this is:

As a guideline legendary gear followed these 3 concepts:

As an example I will show the very first legendary: The Fiery Soul Cutter!

One of my objectives with legendary gear is that it should be available with a little luck (and some fate) from the start of the game. So in order for a legendary item to stay relevant later on as you progress they scale in power with the wielder level!
As an example let’s look (in the new leaner item details UI

) how this works for The Fiery Soul Cutter:

Be as fun as possible!

While powerful, some items can have interesting side effects. Take for example Mal 'Rok's Fury (you might have spotted some Easter egg there). You can throw down a meteor on your enemies, but from with in it a demon spawns that is hostile to everything, including you!

Here are some other great examples!

Then we have armor sets!

In contrast to their weapon counterpart, legendary armor pieces will not grant an intimidate cool ability, but will be part of a item set.

Each set is built to have its own advantages, you will get more bonuses the more pieces of the set you gather. The more powerful bonus will demand you to have the whole set.

Another important aspect of the hunt for legendary gear are Ancient Runes & Altars!

Then, when you collect 3 Ancient Runes you need to find an Ancient Altar of Power! These altars can spawn randomly in any dungeon and come in three flavors:
AncientAltarOfTheArcane(Color will change to blue):

AncientAltarOfTheNimble(Color will change to yellow):

As you might have guessed each type of altar will correspond to a set of Legendaries.

Once in the altar you can offer 3 runes in exchange for a legendary of the Altar's type: 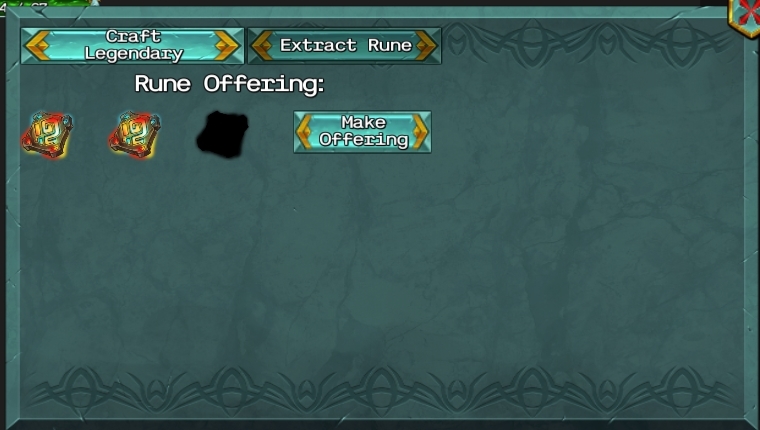 Once you have the 3 runes and do the offer, you will be able to obtain 1 legendary out of 3 choices: 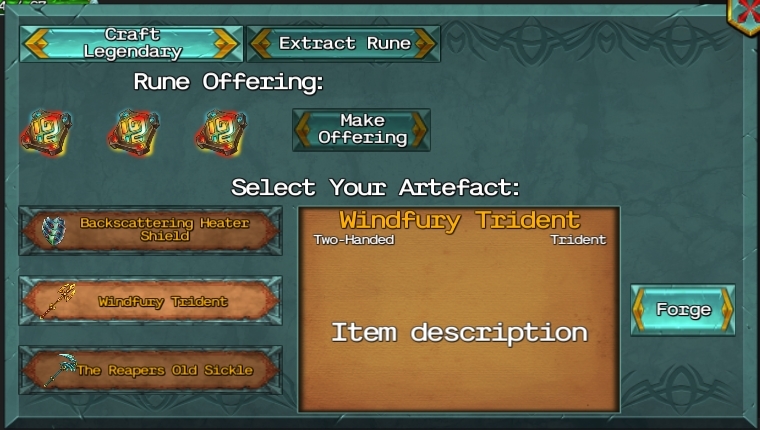 As a bonus at any altar you can sacrifice 1 legendary for 1 rune. This enables you to at least get something back if you had a legendary you didn't like drop the usual way.

Its time now for a great QoL feature!

Here you can see all the items on a tile and also check out their details! You can make comparisons and pick up the ones you want or all of them!

Items highlightNow with just holding shift all the items within view will show up as a small tool tip. Letting you glance whats where and if it is worth picking!

Comparing items now has been improved with colors and standardized position of key features!

All in all this was a huge update for the main game! Both in QoL & Interface as new features! I hope this brings even more adventures to explore Rogue Empire!

As I am working on the next big update I wanted to share a little of what’s coming: Legendary Gear!

This article is a follow up to previous article I wrote before the game released into early access. See link in the body of the article ;) I will address...

Rogue Empire got GREENLIT !! I am so happy! Thanks for all the support!

Latest version of the prelude available on Roguempire.itch.io

Check out the latest development diary for the 17th of December 2016:

Hi everyone, third alpha release of Rogue Empire: The Prelude! Lots of additions! Changelog in the indiedb forums!

Check out the latest development diary for the 11th of November 2016:

Hi everyone, second alpha release of Rogue Empire: The Prelude! Lots of additions! Changelog in the indiedb forums!