You are a lone adventurer in a strange, non-Euclidean world. Gather as much treasure as you can before the nasty monsters get you. Explore about 50 different lands, each with its own unique treasures, enemies, and terrain obstacles. Your quest is to find the legendary treasure, the Orbs of Yendor. Collect one of them to win! Or just ignore your quest and collect smaller treasures.

The twist is the unique, unusual geometry of the world: it is one of just few games which takes place on the hyperbolic plane. Witness a grid composed of hexagons and heptagons, straight lines which seem to be parallel, but then they diverge and never cross, triangles whose angles add up to less than 180 degrees, how extremely unlikely is it to reach the same place twice due to practically infinite size of the world (centillions of locations in just 700 steps from the starting point), and how the world seems to be rotated when you do return. All this matters for the gameplay. The game is inspired by the roguelike genre (although in a very minimalist way), works of M. C. Escher, and by puzzle games such as Deadly Rooms of Death.

HyperRogue can be played for free from its website. The Steam version adds online achievements, online leaderboards, trading cards, and convenience. Also, as the game is constantly updated, the Steam version includes the newest features, such as new lands with new mechanics, or new game modes -- see Gallery for the current differences.

Quite a long time since the last update! Version 12.0, released on Steam and itch.io, fixes this. It includes two new lands, VR support, and has many other feature and improvements! 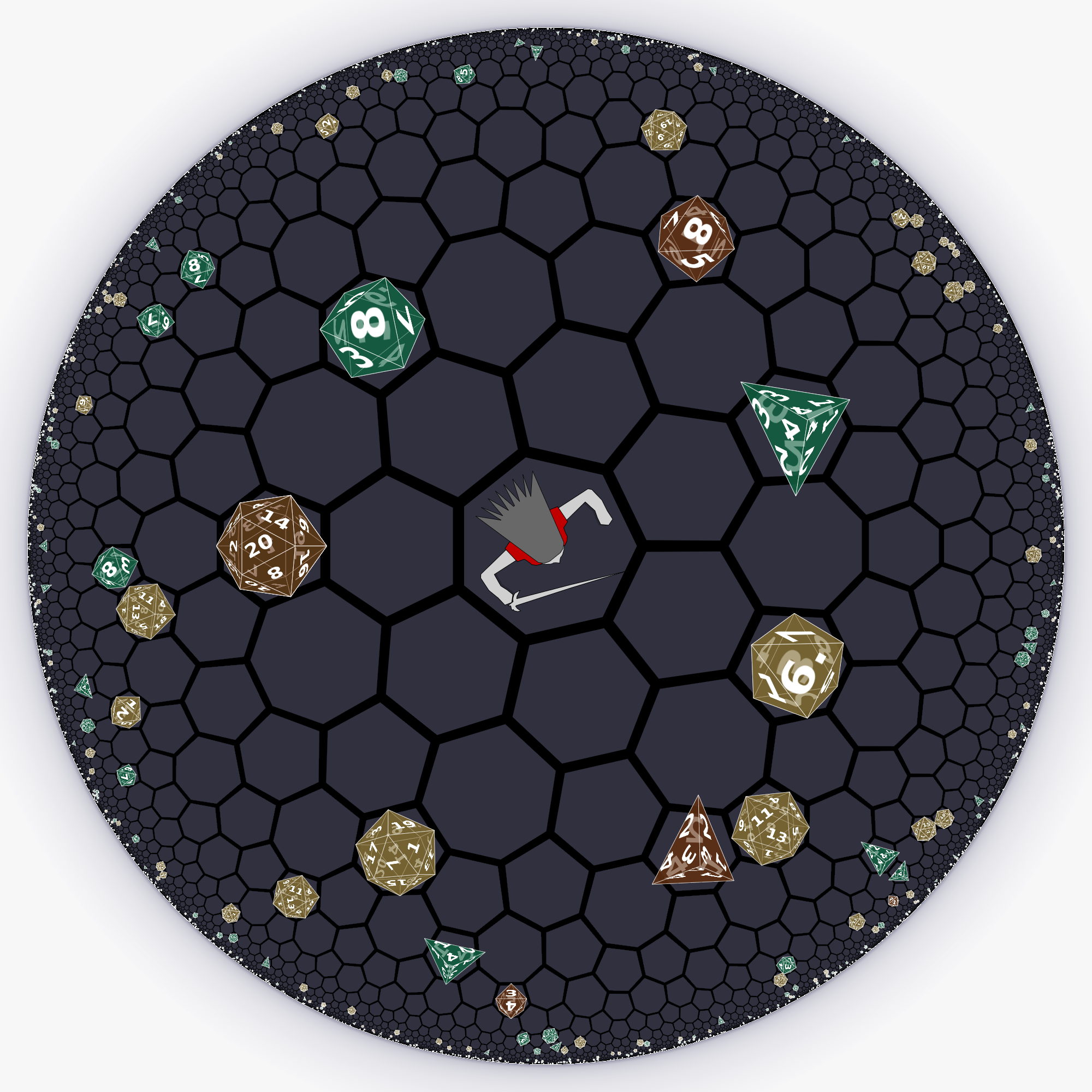 Is HyperRogue the only game where tessellations of non-Euclidean spaces play a major role? Well, no -- while the wonders of hyperbolic tessellations are rarely used, spherical tessellations can be found in any game using dice! When you roll a die and see how the numbers change, interesting things happen as a result of the difference in the geometries of the die and the surface. Many HyperRogue players are dice collectors. Why not have both?

Meet the sentient dice in the Dice Reserve! They like to be in the position where the highest number is on top, but some bad guys rolled some of them into other positions. Will you help them?

Dice Reserve can be found when you have at least 90 (150 in Orb Strategy Mode) treasure. 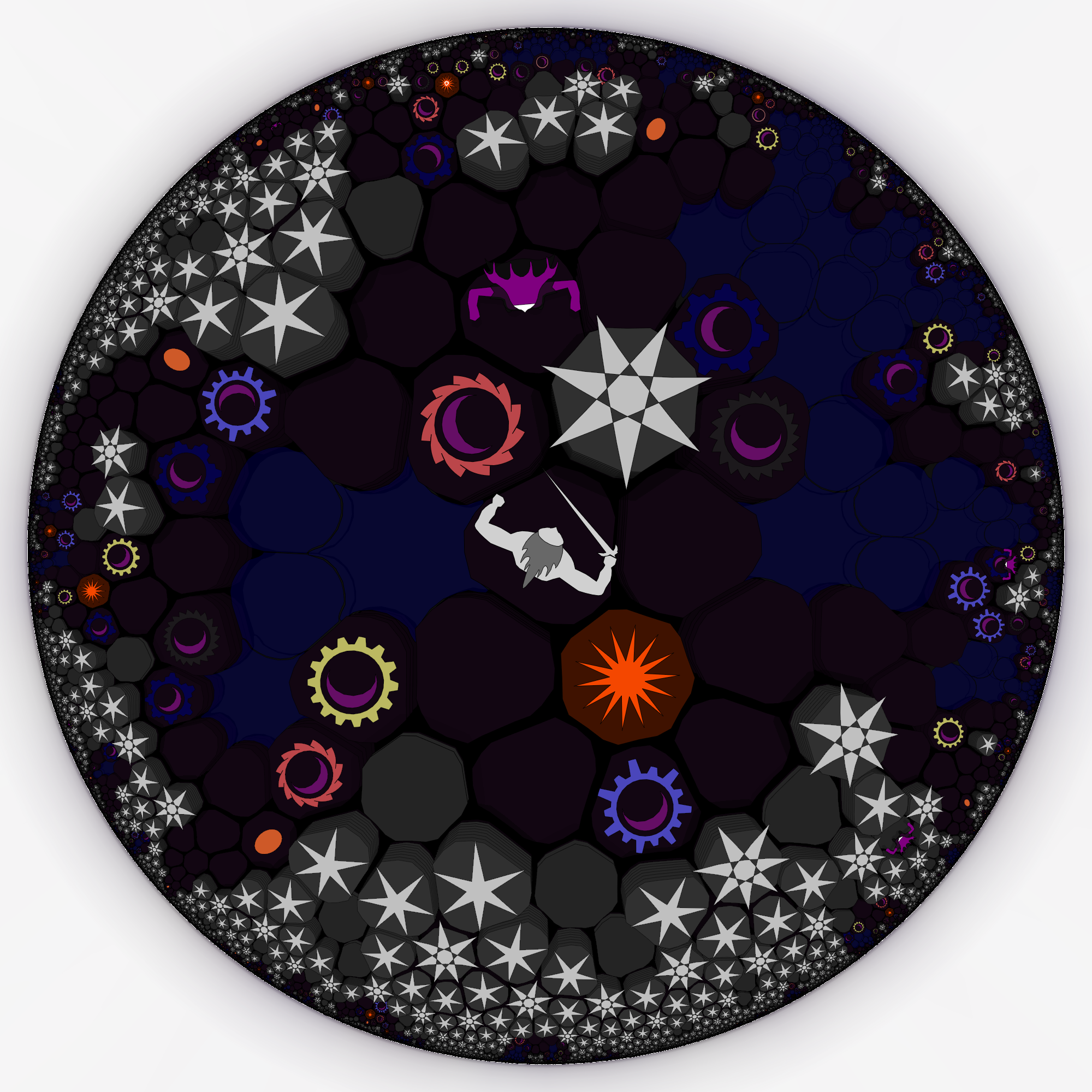 Every land in HyperRogue comes with a new Orb -- a sphere of beneficial magical power. The Cursed Canyon is a land full of Curses. Curses are similar to Orbs, but their powers are mostly negative. You may get weaker, slower, powerless, or afraid of water. You get cursed by moving over curses, or when attacked by a Canyon Hag. You are also pursued by the Shadow, already known from the Graveyard. Will you be able to survive and profit despite all the debuffs and nasty enemies?

Cursed Canyon can be found when you have at least 36 (90 in Orb Strategy Mode) Elixirs of Life, Pirate Treasures, Chrysoberyls, Tiger's Eyes, or Powerstones.

When HyperRogue was first released, it had only the traditional-style roguelike "graphics": # for walls, letters for monsters, dots for empty spaces. These visuals were truly amazing: easy to read, and let your imagination run wild, better than any graphics. But art is needed to, to feed the imagination. How would a non-Euclidean space really look? HyperRogue took a rather surprising path, starting with vector-based 2D graphics, then 3D effects, experiments with full 3D geometries, ultimately becoming a rather universal engine for non-Euclidean visualization.

Now, the RogueViz engine supports Virtual Reality (SteamVR)! This brings a new twist to HyperRogue, as well as the non-Euclidean falling block game Bringris and the RogueViz demos. Turn HyperRogue's FPP mode into the immersive experience. There are many interesting choices when designing non-Euclidean VR visualizations. The geometry works differently in a non-Euclidean space, so some obvious things in Euclidean visualizations (including tons of so-called "non-Euclidean" videos which have nothing to do with non-Euclidean geometry) are, well, no longer obvious. Should the relative headset movements be translated exactly to the virtual space? If so, if you move to another place in VR and return to where you started, you are probably NOT in the place where you started in the real world. And vice versa. This is because the geometry works differently! How should the binocular vision work? Should we just render the inner view from two points? If so, distances are not perceived correctly, and in the recently introduced even weirder geometries this does not even work, so we might want to use other methods. The engine lets you configure various details, such as the above, the length of the absolute unit (i.e. the scale of the non-Euclidean space), and so on. Hyperbolic crochets are much better in real life than any images or videos can show -- but you can get some of the fun by playing HyperRogue on the Hypersian Rug in VR. The 3D models are still not great (roguelike players do not need this stuff), but if you want to play FPP mode with monsters shown as letters, or view the classic Poincaré disk or any other 2D or 3D model in VR, this works too, of course!

There have been also lots of minor bugfixes and improvements. For people who want to fully explore the world of HyperRogue but are less familiar with roguelikes, there is a "casual" mode which lets you save the game after collecting an Orb of Safety and load it many times. For even less challenge, there is the cheat mode and puzzle/exploration mode as usual. Get HyperRogue version 12.0 from Steam, itch.io, or play the online demo, or [to be updated soon] Android or iOS versions. As usual, the Steam version is updated more frequently, includes achievements and leaderboards, and extra modes such as the Strange Challenge. Mobile versions should be updated soon. Join the HyperRogue Discord, follow ZenoRogue on Twitter, and have fun!

While we have worked a lot on HyperRogue recently, we concentrated mostly on experimental features; for people interested in the classic, core non-Euclidean...

The latest version of HyperRogue let us play three-dimensional non-Euclidean worlds. However, there are more interesting geometries possible in three...

HyperRogue version 11.1 is released! While this release does not change the gameplay in the main mode, it lets you experiment with new display modes...

Peculiar game, has her charm. Played on Android time ago.

Mac OS, unfortunately. If you do find out more about that, let me know

A binary package for OSX is available on the website :)

This game looks awesome! Too bad you have to fuss around with makefiles and stuff. I have no idea how to do that!

Thanks! What operating system are you using? A Windows executable is included, and instructions for Linux should be easy to follow. Unfortunately I have no access to MacOS, I only know that someone was able to compile one of the previous versions... so I cannot help you there for now.