Shoot, blast and slash through hordes of enemies in Rocking Pilot - a bullet hell action extravaganza inspired by arcade classics! Use numerous weapons to riddle your enemies with bullet holes or get in close and slice them with your deadly rotor blades - while deflecting and avoiding bullets, lasers and deadly gas clouds!

WYNC Studio 1 welcomes you to the greatest reality TV on Earth: global conflict! We bring war straight to your living room (and no, we’re not talking about the fight for the remote!). Our cameras are everywhere and they capture every bullet, every blood drop, every explosion - all in glorious HD!
We’re the number one place to follow the actions of the mysterious (and handsome) hero, dubbed “Rocking Pilot” by our audience - as he shoots and slashes his way through entire armies with his deadly prototype helicopter!

*A modern take on arcade classics - crafted with care and love by fans of the bullet hell genre! Smooth, slick and full of satisfying explosions.

*A powerful arsenal - tons of weapons, upgrades and ways to combine them! Use everything from missiles and miniguns to lasers and rotor blades!

*Fight at any range - simultaneously - shoot long range projectiles while slicing nearby foes with your rotor at the same time!

*Brutal but tactical bullet hell - time your rotor overdrive to deflect bullets and environmental harm at the right moment, or use it to smash tough opponents - quick thinking is required!

*Collect 76 trophies, 96 crowns and 34 skulls in the main campaign and optional missions. Because you know you could always use more skulls. 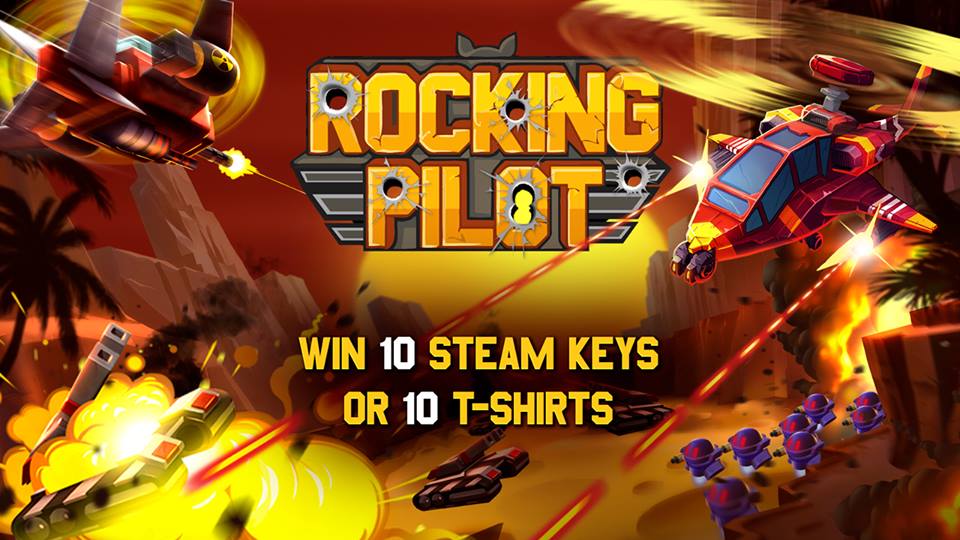 We are 'preparing a big update for our game and would greatly appreciate your feedback! Also, we have prepared 10 Steam keys and 10 t-shirts for those who help us improve our game.

All you have to do is visit this page ➡️ Goo.gl, download the Rocking Pilot demo, play it a few times and then answer five short questions. Winners of the prizes above will be chosen from a random draw of entries on 9th August! Good luck!

Bring the Heat with Dual Ranged and Close-Quarters Combat in this Hardcore, Hard Rock Shooter!