Update released following several bug reports - hopefully this will address issues people have had with trying to use xpadder and joy2key with the game!


Improved joypad support and fixed a bug that prevented joy2key and xpadder working with the game (whoops). Improved the .ini file system so that selected control config is automatically saved, and hiscore is recorded even if you quit mid-game. Also, reworked the tutorial code so that you can only not skip the intro on your very first play of the game (again this is saved in the .ini file). Fixed the windowed mode so that the game window can be hidden (previously it always stayed on top). Tweaked level 25 so that spawners don't appear in difficult to reach locations.

Control method is selected at title screen by pressing J. Default is keys (so xpadder users, etc. can now play the game). JOYA uses the POV hat for movement, JOYB uses x/y axis. Fire, strafe and pause buttons can be reassigned in the ini file after loading the game for the first time.

Robotz DX has been reviewed on BigDownload.com as part of James Murff's excellent Freeware Friday series :)

To obtain your copy of Robotz DX in a neat CD case complete with GM8 source code and all assets used to make the game...

A Year in Review - Quarter Three

The second ever IndieDB Spotlight video now will more VO! This month we bring you six of the best Independent releases found on IndieDB.com, both retro...

Robotz DX is an unashamedly old-school, single-screen shoot-em-up with strategic game play. Although simple in concept, it is a difficult game to beat...

Got throught to the end at long last bro! Is there any point of emailing the score now? 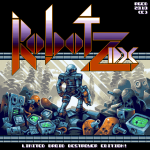