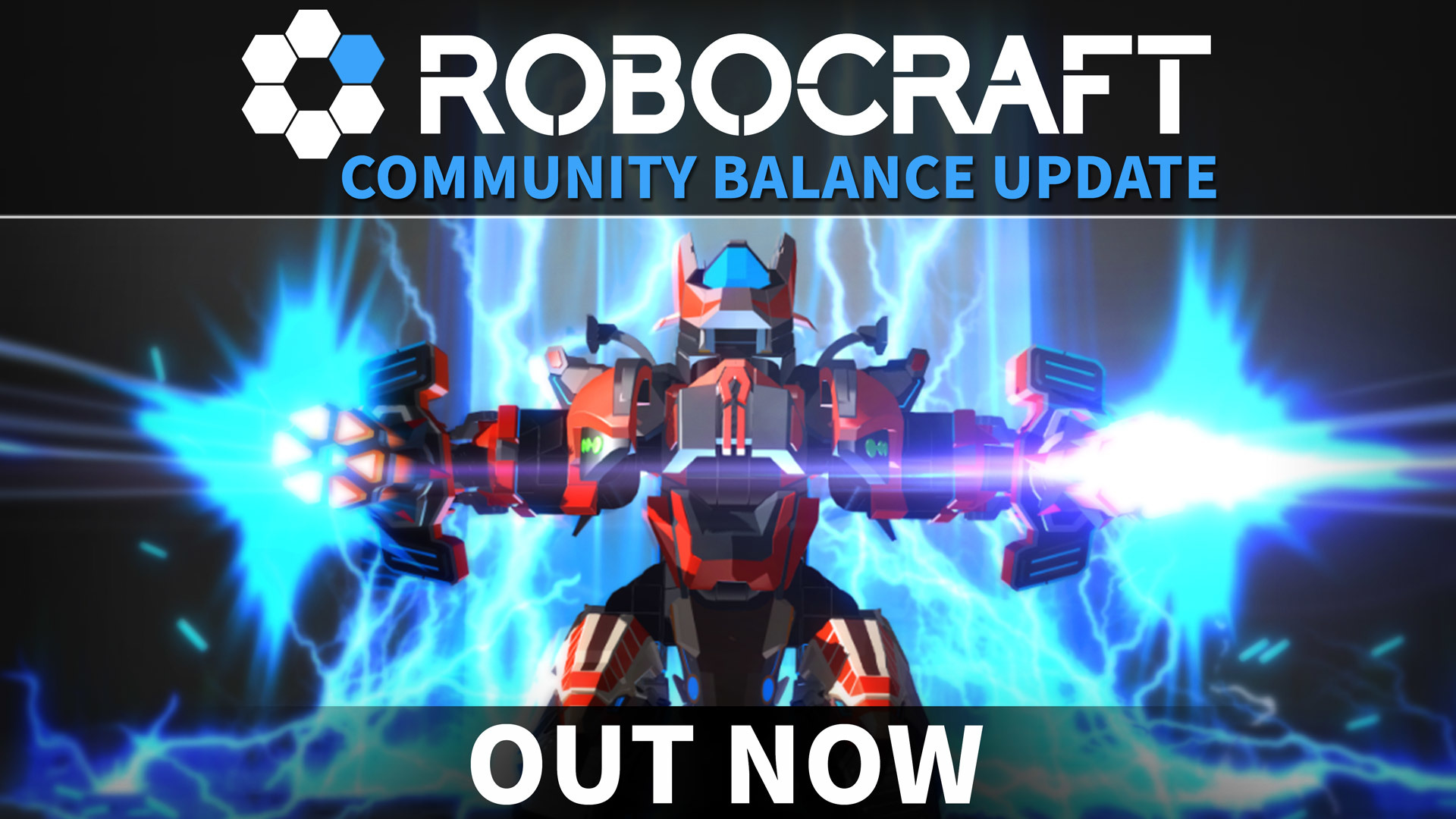 We have a pretty substantial update today which includes weapon balance changes based upon data we have received from our latest community feedback thread. There are also a ton of bug fixes and quality of life improvements.

A community group known as Robocrew have created an incredible brand new trailer for Robocraft. This trailer will appear in game when you launch Robocraft

A couple of weeks ago we asked you all to provide us with some information which would allow us to help with weapon balancing. Thank you to everyone who provided us feedback, we’ve acted upon them and are happy with the new balance changes but would love to hear your feedback. We’ll be running another community balance survey in the future. But first, lets detail the core changes we made to weapons

Plasma
Overall consensus was that plasma should receive a damage nerf. We have decided to reduce the damage output of the Plasma by 5%.

Nanos
One of the most debated topics from our weapon balance thread was that Nanos needed a significant buff. We have chosen to give nanos a 10% buff in healing rate and a 5% reduction in energy cost.

Flak
After looking into the flak damage values we discovered that there was a bug which was causing the in-air damage from the flak to be registered incorrectly. This bug is now fixed and means that the Flak will now deal greater damage to in-air targets.

Seekers
We didn't want to make any drastic changes to seekers as we’re still receiving feedback on the range changes we made since our last update. We are hoping to gather more feedback for this weapon again in combination to the other changes made during todays update.

Ion
After discussing this weapon internally, we believed that the Ion would feel more balanced once Plasma has received a nerf. The nerf to the Plasma in this update should address this.

Chaingun
Feedback had shown that players wanted an increase in damage and an increased fire rate. Based on this, we are increasing the shots per second from 10 to 12 and increasing damage per shot by 5%.

Mortar
Players reported that the Mortar consumed far too much energy. We have chosen to reduce energy consumption by 10%, this will increase the shots launched in 1 energy bar from 5 to 6

Tesla
The tesla will have three major adjustments in this balance pass. Firstly, they have increased damage by 5%, reduced energy cost by 5% and finally an increase in hits per second from 4 to 5.

We felt that the community feedback that we received a few weeks ago really was incredibly useful and we are planning to do it again very soon… In fact, we’ll be posting a new feedback balance thread in time for the weekend.

We have made a ton of changes in this update to weapons, so please do spend some time playing the latest update so you can get a good understanding of the core changes and how they affect the gameplay.

Tomorrow we’ll be creating another feedback thread post in the form of a survey to make compiling the data even easier.

As an extra little bit of polish we’ve added some visual particle effects to the voting screen. Clicking the Best Played and Best Looking buttons will activate them.

Based on the number of votes for Best Played and Best Looking, another particle effect will appear behind the card.

Patch notes of the changes and fixes are included below:

There may be a chance that some players will experience an issue with their Steam Achievements. If you see anything odd happen, do contact Steam support.

Thank you everyone for your feedback and continued support. We hope you enjoy this update.