This week, you can catch a first glance at what exactly the Corporations will be. In similarly exciting news, Michi has been fleshing out the flight system, and Julian is getting everything ready for our first exhibition of 2018!

This week, you can catch a first glance at what exactly the Corporations will be. In similarly exciting news, Michi has been fleshing out the flight system, and Julian is getting everything ready for our first exhibition of 2018!

After my short Easter break I continued were I left off and started working on the technical foundation for corporations.

Corporations will be the PrUn-equivalent of clans or alliances, meaning one or more players can form them to have private communication channels and similar social features. But beyond that, corporations in PrUn will offer a range of additional gameplay features. First of all, players will not just be members but also shareholders. This means that things like share-dependent voting rights, dividends or shares-for-services features are a possibility. Corporations could even list on a stock exchange some day.

Then there are “projects” that will allow a corporation to build structures for advanced mid- and end-game features like infrastructure and military installations.

And beyond that, the sky’s the limit. We intend to expand the possibilities offered by corporations over time. But first things first: My plan is to get the basic establishment of corporations finished over the coming weeks so we have that ready for the next alpha test. Stay tuned!

This week I was mainly working on the flexibilization of the flight model. The flight model up to now was pretty simple and consisted only of a few flight segments. Ships could only be in orbit around a planet, in-flight or (in rare cases of aborted flights) in an orbit around a sun. Later we added the departure and approach flight segments to spice things up, but the model itself was still pretty simple. Flights to other planets almost always look like this: departure, jump, charge, jump, approach.

While this made it easy to calculate the flights, it is not compatible with the changes we have in mind: There will be space stations in orbit around planets or suns and we want to differentiate between ships landed on a planet and in orbit of a planet. As you can imagine these changes lead to added complexity in the flight calculations and the simple and rigid method we used doesn’t work anymore.

Right now I am at the point where I ported the old flight segment types to the new system and all the tests work again. The next step is to adapt the client!

Visual design is the most foreign aspect of game development to me. I learned to code a little, I can make music and sound effects, I can do business and marketing stuff, but I never got into any of the disciplines related to making things look good. That said, I had to tap into my inner designer this week. First off, I made new business cards for our stands at Quo Vadis and Games/Bavaria Vernissage: 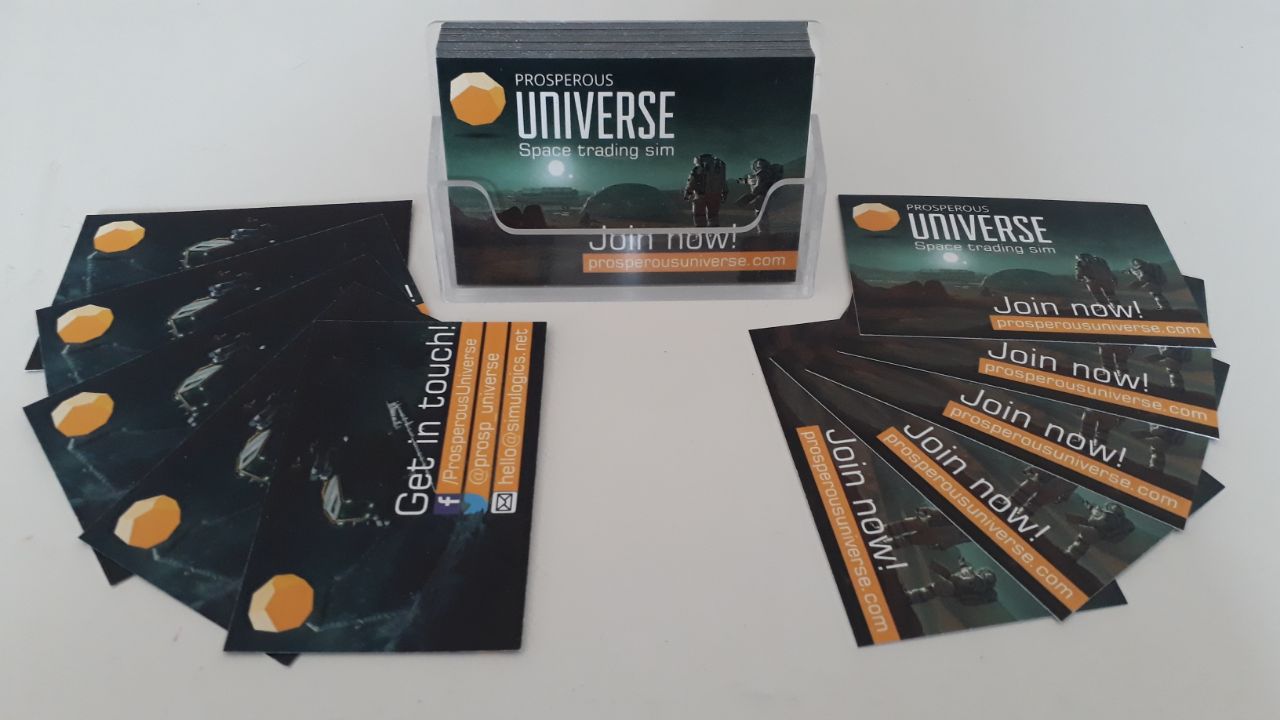 They were thrown together in Paint.NET (which is not MS Paint, mind you!) and I’m actually quite happy with how they turned out.

Next up, both our homepages are getting redesigned. Our company page is super-outdated and getting revamped to present us as the indie game studio we’ve grown into. For that purpose, I had to gather a bunch of reference work, write a style guide and then provide feedback for the first batch of new logos and corporate designs provided by the agency in charge of the redesign.

The Prosperous Universe homepage is also getting an overhaul, for which I wrote up the guidelines. I also made a rough landing page mock-up:

Last but not least, I sent out newsletter #6 this week. With a distance of several months to #5, it was mostly a summary of our past milestones and a short announcement of our upcoming exhibitions. If you missed it, you can read it online and, to not miss another, subscribe in the top left corner.