The lands of Fyra are a harsh, cold, and unforgiving wasteland; traits the people that inhabit it have inherited. When their children reach maturity, some are sent to guard the land's borders - told never to return without either a trespasser or completing a Journey delivered by the Gods. In exchange, their families are guaranteed food and shelter in the harsh lands for as long as their children man the wall; in the end, many die on the border - waiting for intruders who do not come or Gods who will not speak with them. Iyu is one of those who was fated to guard the border. He has survived 30 withering years in the biting cold and, now an adult, is plagued with visions of death and dying alone. His resolve is tested as the Gods finally deliver him the means to take the first step on his journey - a meeting with the Goddess of Death. It seems that to go home, first he must die trying.

Ouroboros: The Sacrifice was a pretty challenging game to make for me, personally. I'm the sort of artist who loves to play with colors and shades - so making an ink and paper-style game was thoroughly outside my usual expertise. I wanted to challenge myself though - to grow and evolve. I don't often think about things like line weight and, unfortunately, composition - and drawing with only ink and paper available forces you to consider those things or be satisfied with bad looking art. The process of creating the art, however, remained mostly the same - and that's what we'll be taking a look into with this article. 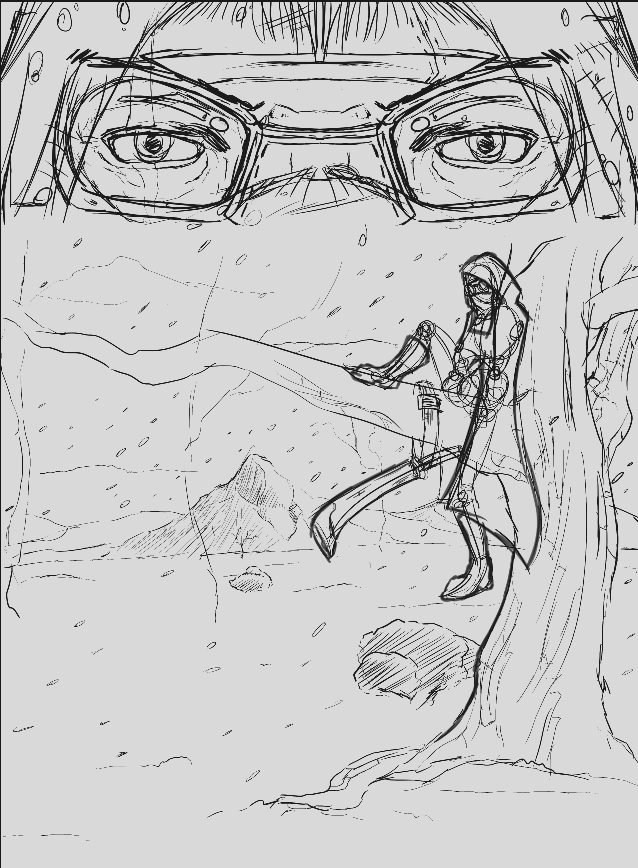 The initial concept for the Introduction Scene for Ouroboros: The Sacrifice

All art comes from an idea - a picture or just a couple of words or even just an interesting thought. The trouble with art is taking that idea and putting it down on paper in a visually impressive and nice looking way. Very few artists can draw straight from their imagination with 'final art' quality - most of us are blessed/cursed with the necessity to iterate, to build on the idea until it gets to what we wanted. The introduction for Ouroboros: The Sacrifice was something I wanted to be somewhat cinematic - a man sitting in the nook of a tree, his sword dangling off the branch, bundled up and uncomfortable looking; snow blowing in every direction; distant mountains in a mostly barren white field of rock, ice, and snow. I took those ideas and quickly sketched them down into the above piece. Of course, art is by its nature transient. What we initially think of we have the opportunity to improve as we work - which is the sole advantage of the artist who must build from a foundation to reach the 'peak' - a finished art piece. 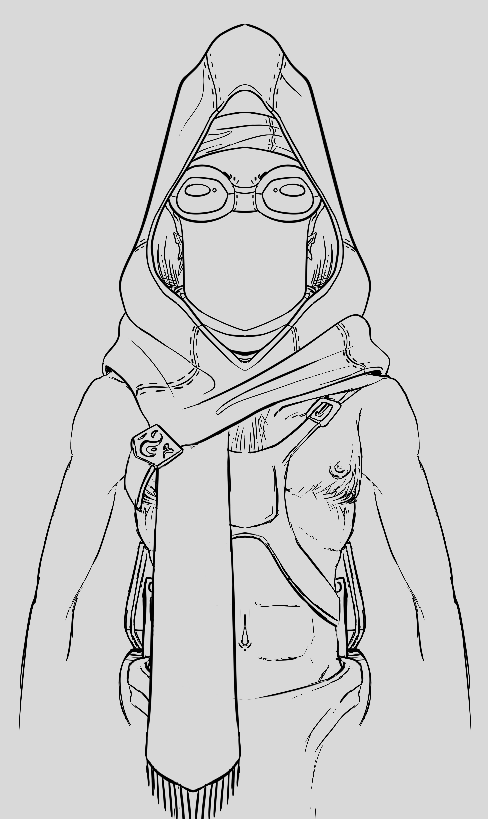 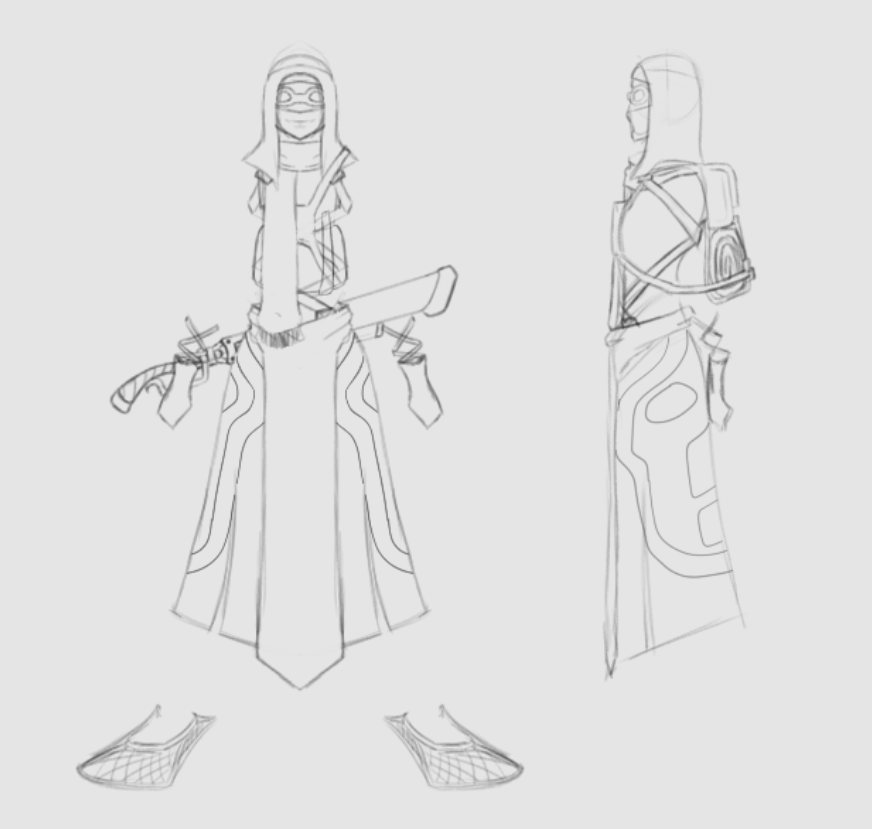 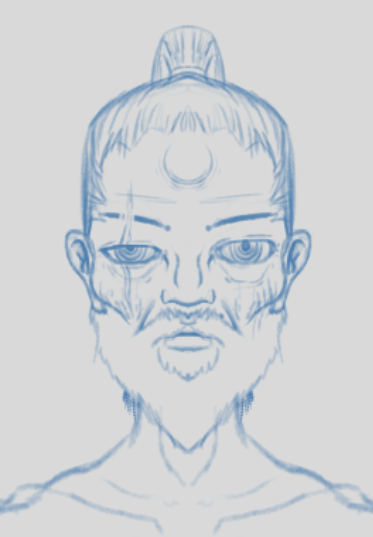 Art is often more than what you usually get to see as the final work. After completing the above sketch, I set to work actually filling out concepts and character sheets to match the character, drawing him from multiple angles, states of dress, and et cetera. You see a character doesn't exist alone in a world - the moment you drop them into one, they become a symbol of culture - of their heritage and family. A history of scars, wrapped leather, and banged steel formed in the flesh of a character who you, hopefully, can breathe some life into. So I made sure to figure out what others in his culture wore - where he deviated, and, why. Once that was done, I returned to my work and did another sketch - a refinement on the above to try and smooth out all the rough edges of the composition. 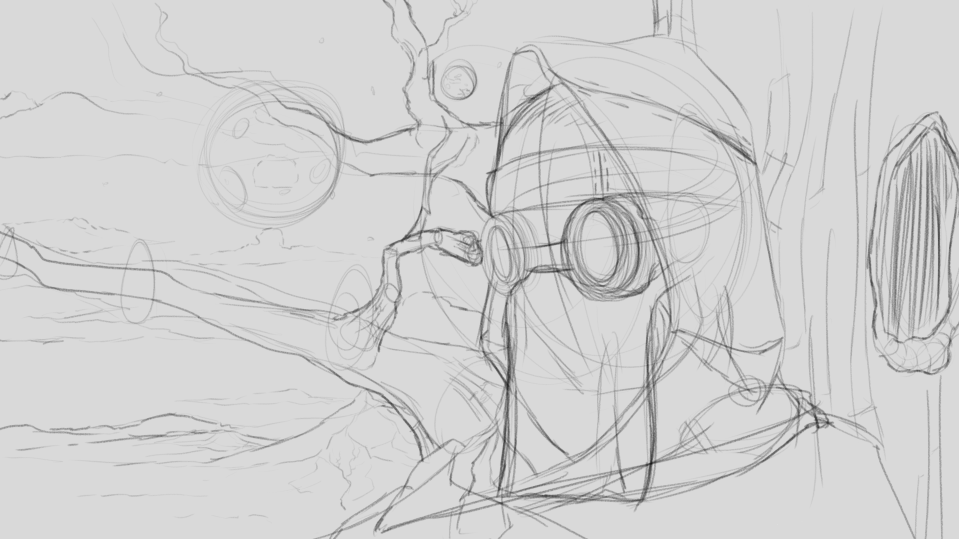 Art very rarely goes as planned for me. I'll set out to draw a sword and wind up drawing a scene. I'll draw a room and wind up making a close-up sketch of a candle. But this is natural, because I'm always looking at my art with a critical eye. "What's the importance of this piece. What do I want people to feel?" Those sorts of questions are always bubbling as I work. In this case, though I loved the loneliness of the intial concept sketch, I had to recognize that this game is being played from the first person perspective - but the conversation dialogues are from the third person. So, I needed to familiarize the player with the character they'd be controlling. In order to do that, I needed to make sure that the player was exposed to the character several times before a dialogue even occurred. I did this with the introduction sequence and the Mirror in the Camp. This was just my initial sketch though - you can think of it as a scaffolding I use to mark out where things are meant to be. Often the final ink looks a little different. We'll go quickly through my processes here as I work to complete the inking of the piece. 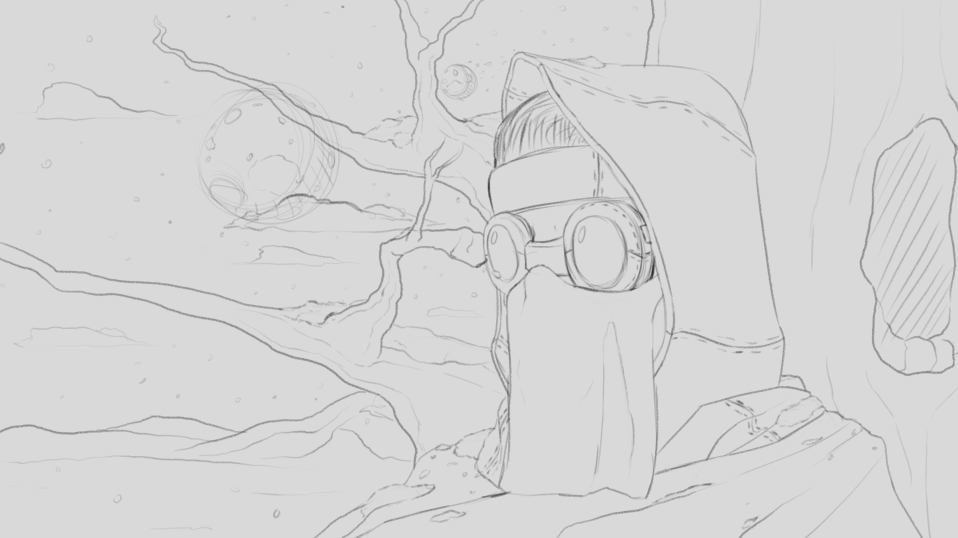 Refining the Ideas of the sketch and clarifying details

With the aid of my second sketch, I drew a third. This one is the guide I'll be using to complete the inking of this scene - I went ahead and refined and detailed parts I felt were key aspects, making sure to mark out spots that were hidden in shadow. Normally, I would knock these areas out by using dark colors or et cetera, but working with ink and paper wherein you try and proclude those sorts of things is another sort of interesting challenge that I set out to try and conquer. How do you make shadows without ... shadows? It was intriguing. 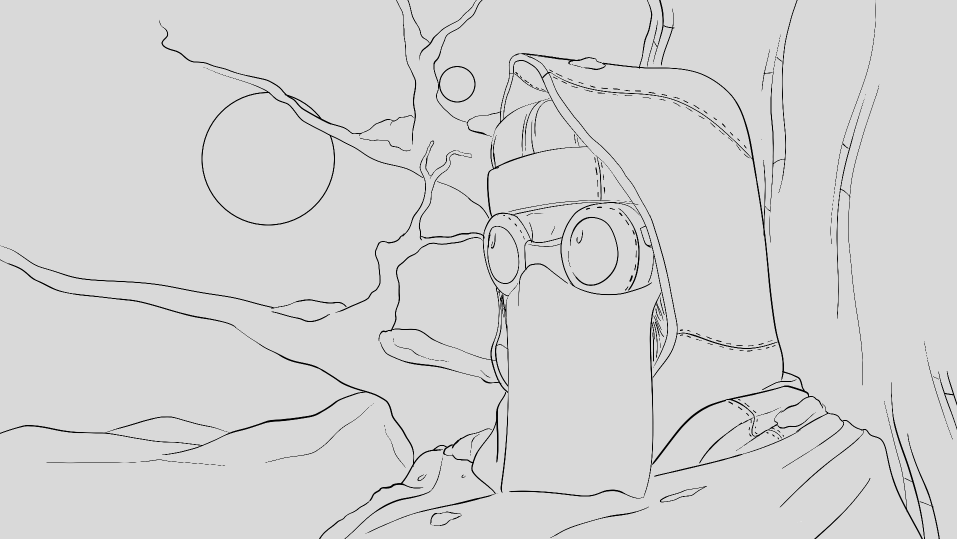 But I decided to put that question aside for the moment, concentrating on pulling out the most important parts of the scene. The character, the two moons in the background, the mountains, the tree and branches. I always try to work from my most important spots outwards, as that's also how I tend to detail things (I usually just start doodling on whatever my brush is over - it's an unconscious thing most of the time). The scene needed more though - more details, more eye pulling. Note the stitching of the fabric - the subtle hatching near the face cloth. I'd usually leave these details for after shading and coloring - but in this case, I was forced to do it first. 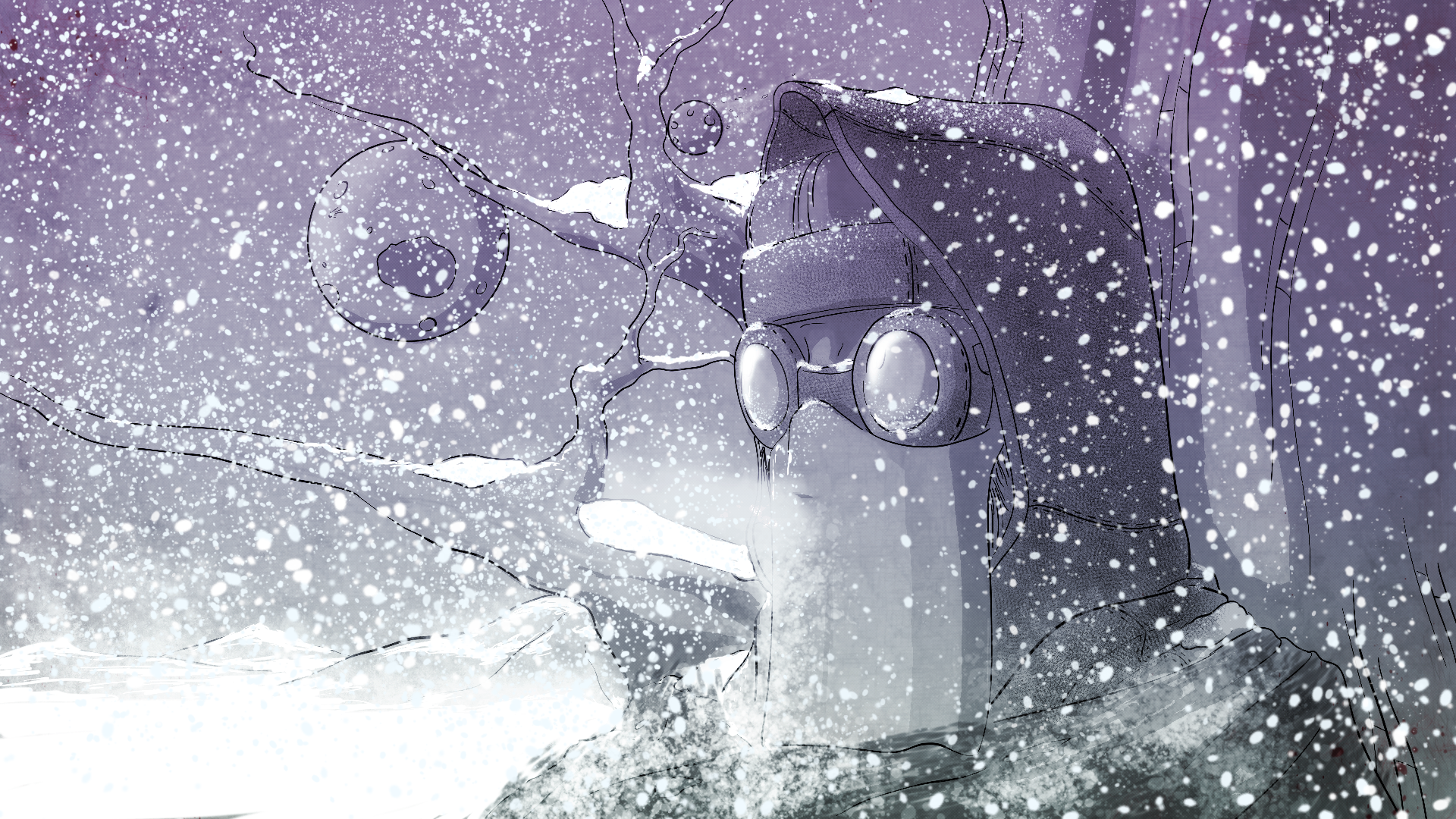 Of course, art by its nature is transitional as I mentioned before. The more I worked on this piece the more I thought to myself 'you know, this piece should really stand out from the rest of the game - it needs to stand on its own'. So I struck on a concept that would permeate through the game - color. There would be color, but only in places where the player was in a place or state of mind that was 'beyond the world'. That is to say that, in the game, 'normal' is black and white and 'odd' is color and shadow - a reversal of what anyone living a waking life in our world would consider 'normal'.

This was the most time intensive step too. I had to do patterning, shading, texture, effects (the snow), and even thought to include the Firryn's hot breath steaming out from under their face mask and the frosting of the glass on his eyewear. I really did try to put him as much in the environment as I could - to make him almost one with it. Still, though, I felt that this wasn't visually impressive or emotive enough. But I had a plan. 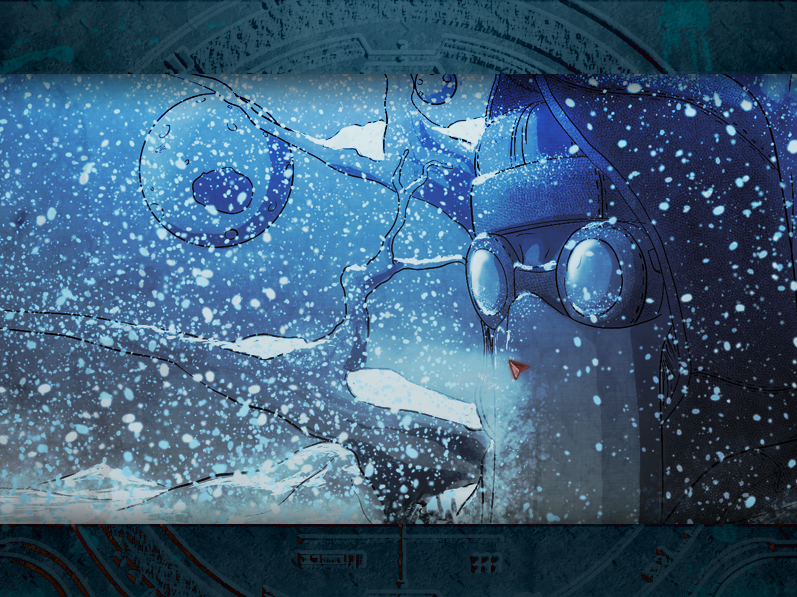 So I pulled the camera closer in to the snowcloak's head, the most important thing that I wanted to familiarize the player with. I wanted to contrast the Firryn against the rest of the world, like he was there but didn't belong there - a sore thumb sticking out. By the time I was done, and the time I had color graded the piece to make it feel even more somber and depressed I was satisfied. Another piece in the game was completed.

At the time I had another 14 full pieces to go through, each of them about as intensive to create as this one and with even harsher constraints. All of them went through an evolution, an adaptation to my changing whims and fancies as I considered what the player was seeing - what I needed to draw their eye to - what I wanted them to learn.

By the time I was done with Ourboros: The Sacrifice's art, I felt much more confident in my ability to do linework and composition. I've certainly grown from the experience, and I feel like that was reflected in the last pieces for the game - which I also wanted to be the most visually stunning and impressive. Like my main character, Snowcloak Iyu, I had gone through a journey which took me to places I feared - and made decisions which would impact my career as an artist. Though, perhaps, it was not nearly as harrowing! 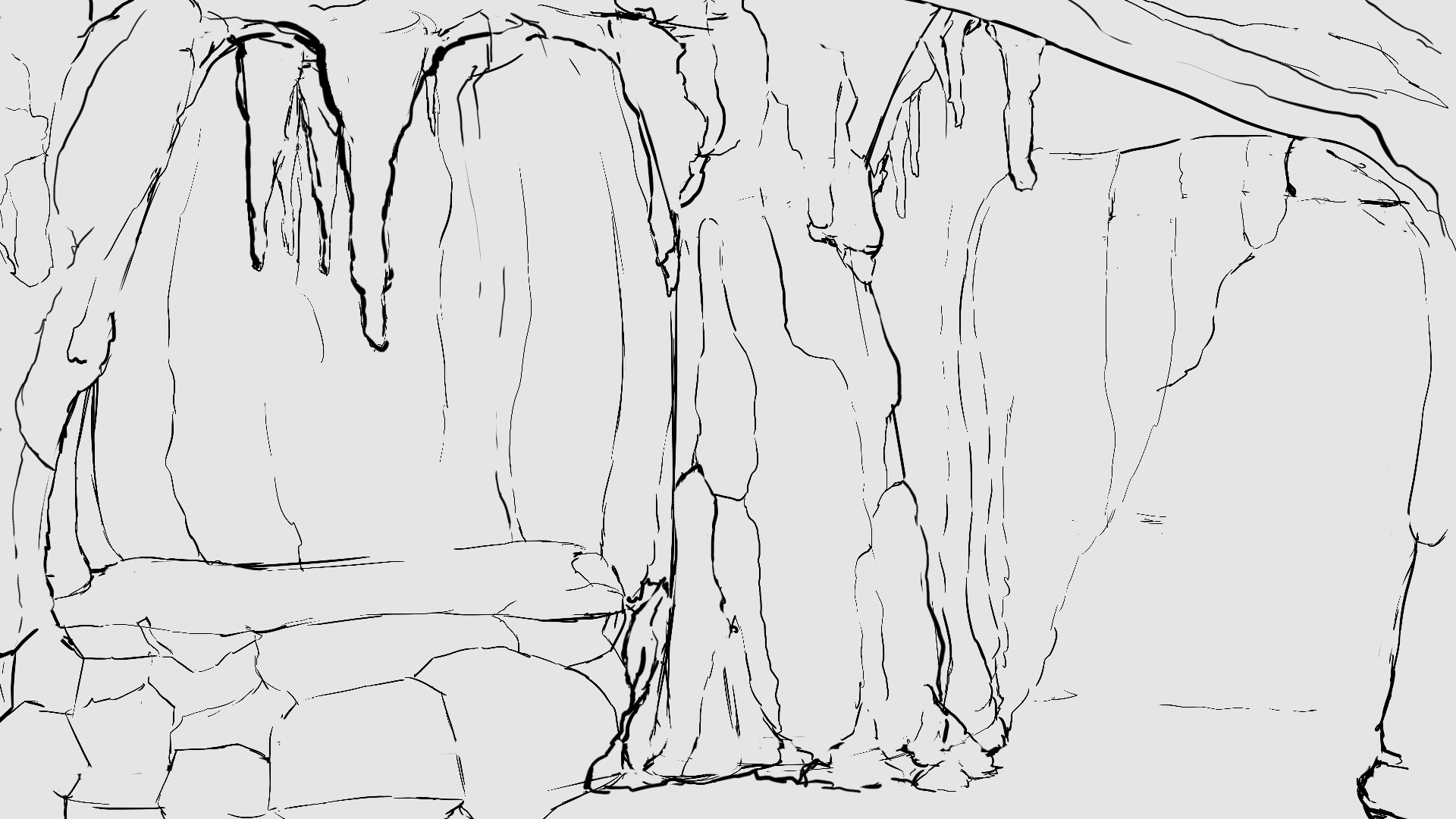 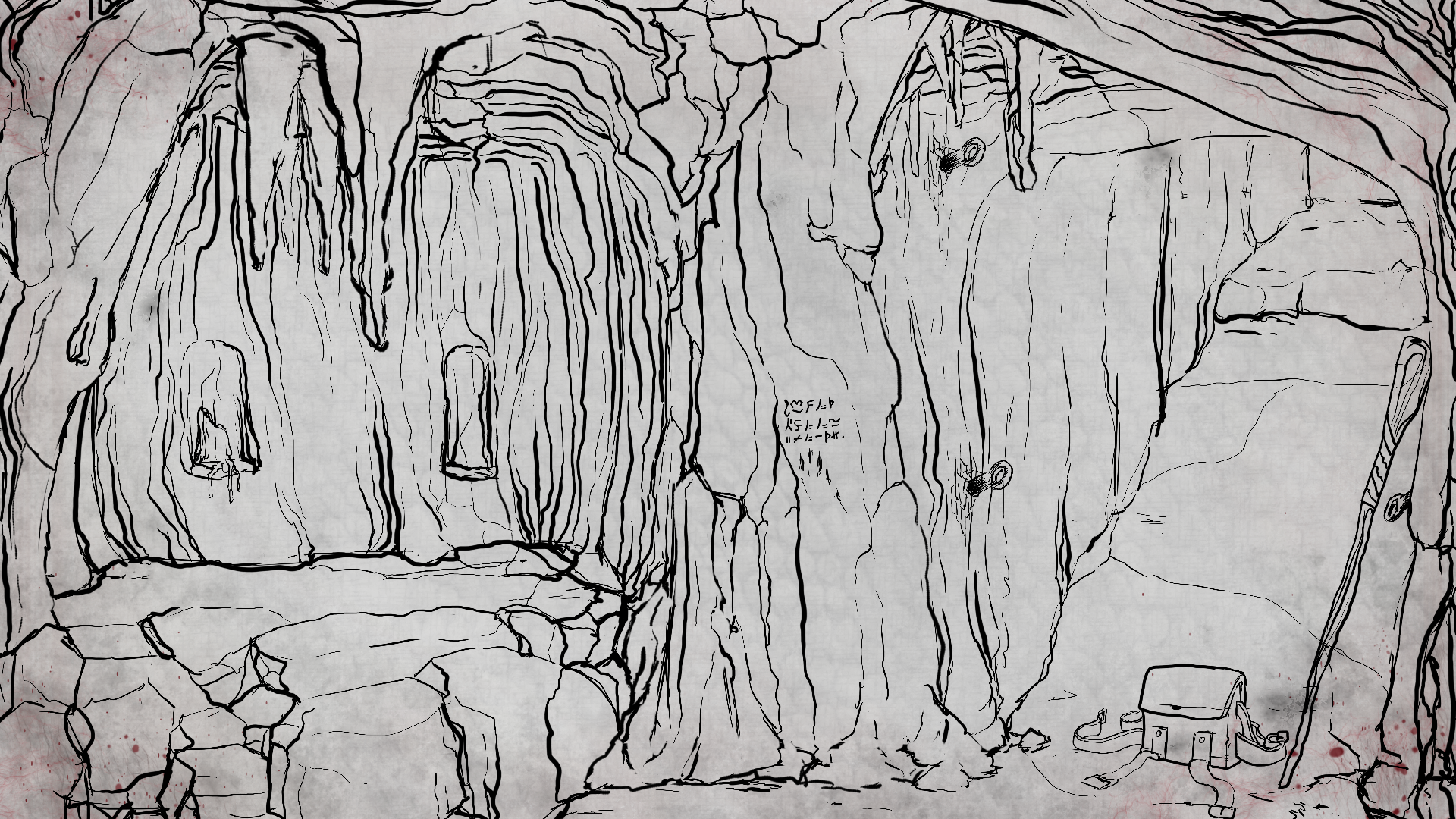 The start of my Journey as an Artist with Ouroboros: The Sacrifice 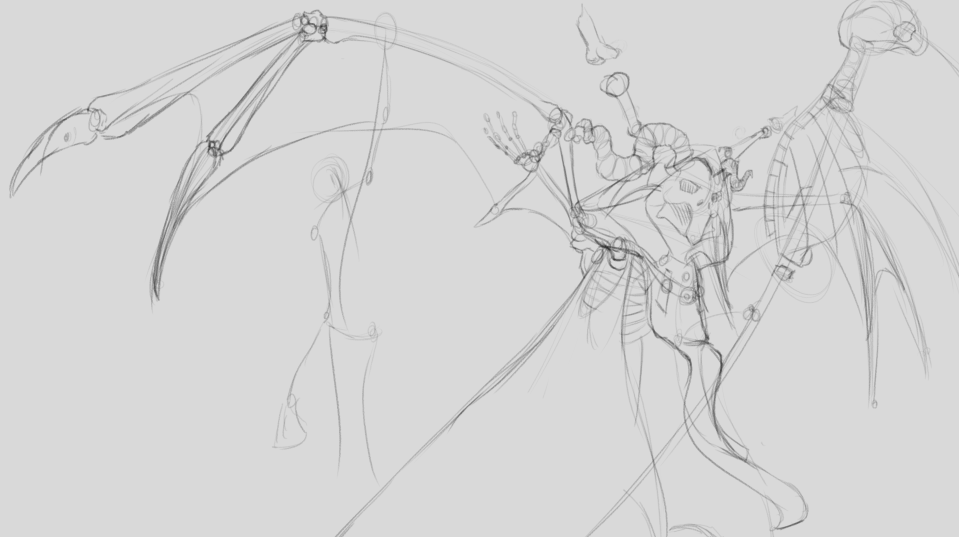 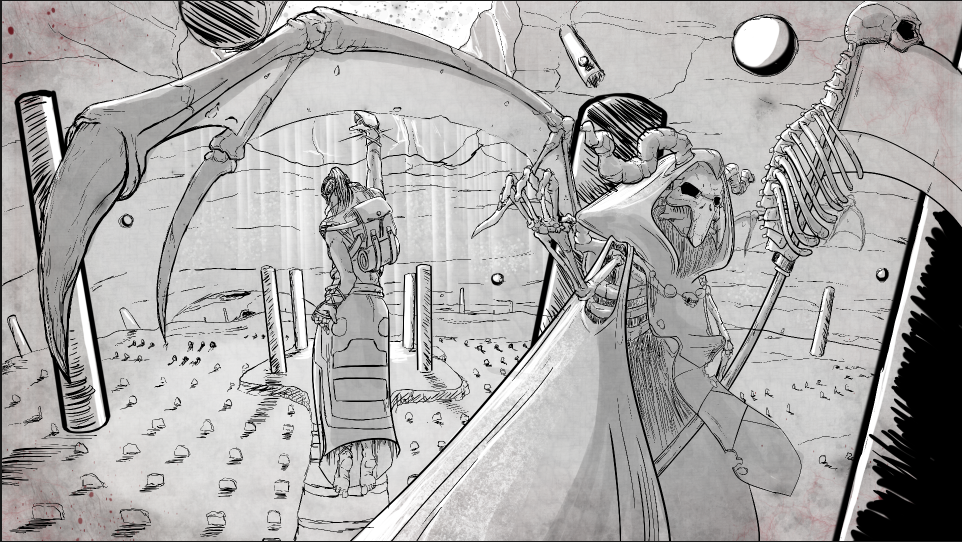 The end of my Journey in Ouroboros: The Sacrifice - and the start of another.

Thank you for your attention and your time, following me through this short journey in my creative processes. I hope perhaps you learned something or, at the least, were entertained by watching the art of the game evolve from its inception to its completion.

I hope to continue refining what I've learned here with Ouroboros: The Sacrifice and apply it to future projects - of which, I hope, will be a sequel to it. But whether or not it obtains one is the decision of my audience (you). I hope you'll decide to journey again with me - on another 2-5 month voyage through Serzahnk on a trek to explore the life and decisions of the Snowcloak Iyu.

Ouroboros: The Sacrifice is now available on IndieDB for download! The currently available version is 1.02. I look forward to hearing from y'all!

Having trouble with a puzzle? Can't interpret what the Journal has to say about one of the game's puzzles? Come read the game's official walkthrough and...

The full version of Ouroboros: The Sacrifice. Currently available version: 1.6. Please see the description for the game's changelog.

Ouroboros: The Ascension Point and Click
Twitter
Tags
Embed Buttons
Link to Ouroboros: The Sacrifice by selecting a button and using the embed code provided more...