Nusantara Rising is an online city-building game that takes place in Indonesia at the 15th century, which at that time it was known as Nusantara, as mentioned in the book of Negarakertagama. And this century is a time where kingdoms on Indonesia reached their peak of glory, thus we call this game "Nusantara Rising".

Players will assume the role as local Adipati, lord of small and undeveloped village. They are required to develop this village in order to survive on this era by building farmlands, mines, infrastructural buildings, balancing the productions and needs, recruit troops and etc.

Note:
We're still prototyping this game, it is coded in C# using XNA Framework. All information, and etc posted here are subject to change.

Due to finite budget we have, there will be only 3 Kingdoms we're featuring : Majapahit Kingdom, Sunda Kingdom, and Aceh Sultanate. Which only Majapahit Kingdom will be covered in singleplayer campaign's base game, the other two factions will either released via DLC or Expansion Pack. There's lot more we would like to add, we're still in the middle of researching, I myself is an Indonesian but it's hella hard to find references! And as always we would like to hear your feedback and suggestions regarding our project, Thanks for reading!

Thanks for voting and helping Nusantara Rising on it's quest to become the 2022 Indie of the Year. You are now in with a chance to score some free games. Help this game secure more votes by embedding the widget (or link) we have included below on your favorite sites.

It's been a while since last post, there were a mistake on our core code so we had to do pretty much big changes on our prototype. The game will facilitate 9 kind of resources (Brick, Wood, Cotton, Batik, Spice, etc) + 1 Currency called Tahil, in building your villages.

Here is the latest screenshot of our current build, ignore the nonsensical numbers it's for debugging purpose :P Your Village screen, The transparent buildings are still under construction, 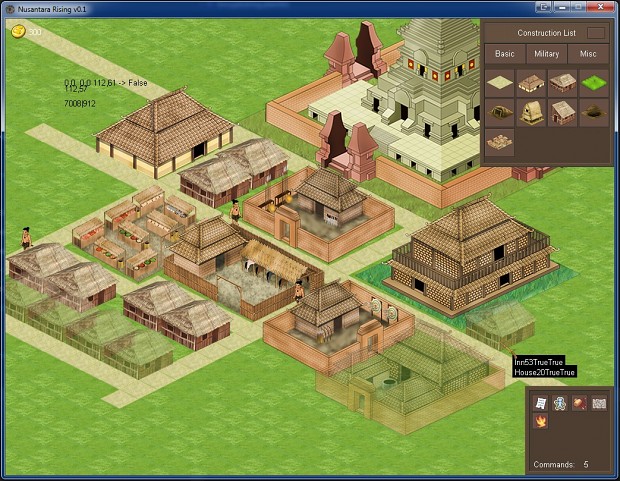 We are aiming to release a public alpha version by the end of december of early january. Hopefully I have enough coffe stock!

Been a while since our last update, here I come with another informations on units in Nusantara Rising.

So originally we weren't using any particular engine out there, just plain C# in Visual Studio. It went well until we were prototyping the village view...

Units in Nusantara Rising are mainly divided into two categories, Combat Units and Non Combat units. Each of them are uniques and have their own purpose...