Nazi Zombies Portable aims to recreate the Nazi Zombies experience from CoD: WaW into the Quake engine, making it playable on the Hand-Held PlayStation Portable Console (Does not require Custom Firmware ) and can be easily played on just about ANY computer out there (Even Windows 98!). For those who don't know what Nazi Zombies is about.... Nazi Zombies is a gamemode in Call of Duty: World at War.
Nazi Zombies consists of up to four people (PSP Version does not support multiplayer right now) in survival against endless hordes and waves of "Nazi Zombies". Each wave the rounds get harder and harder, and you get points for barricading walls and killing zombies. You use the points to buy guns or you can spend them on the mystery box where you get a random gun in return. NZ:P will feature downloadable map-packs (don't worry they're free). We are constantly working very hard on this mod, so check us out at our forums.

Alpha has been released to the public, since Christmas 2010.

Okay, so, I didn't mean to lie about frequent updates, that just kind of.. happened. Returning to Mod DB frequently proves to be a hassle and Discord became incredibly convenient and as such that is where every further update has been dominantly showcased.

To make up for that, though, this article will serve as a mega-post detailing every major event that has happened with the game since the last post of March 29, 2019 (2.73 years from today), in chronological order.

In September of 2019, the Ray Gun was (mostly) fully restored, with a new model made by @DerpedCrusader. There has also been some attempt made at faithful FX, though this is currently only in the PSP builds of NZ:P at the moment and is currently unfinished.

As of October 2019, zombies were brought up to snuff across all platforms (meaning on PC gibs properly work). Efforts were also made to target accuracy with spawning rates, spawn delays, health algorithms, etc. to fix an underlying issue with NZ:P's difficulty curve. 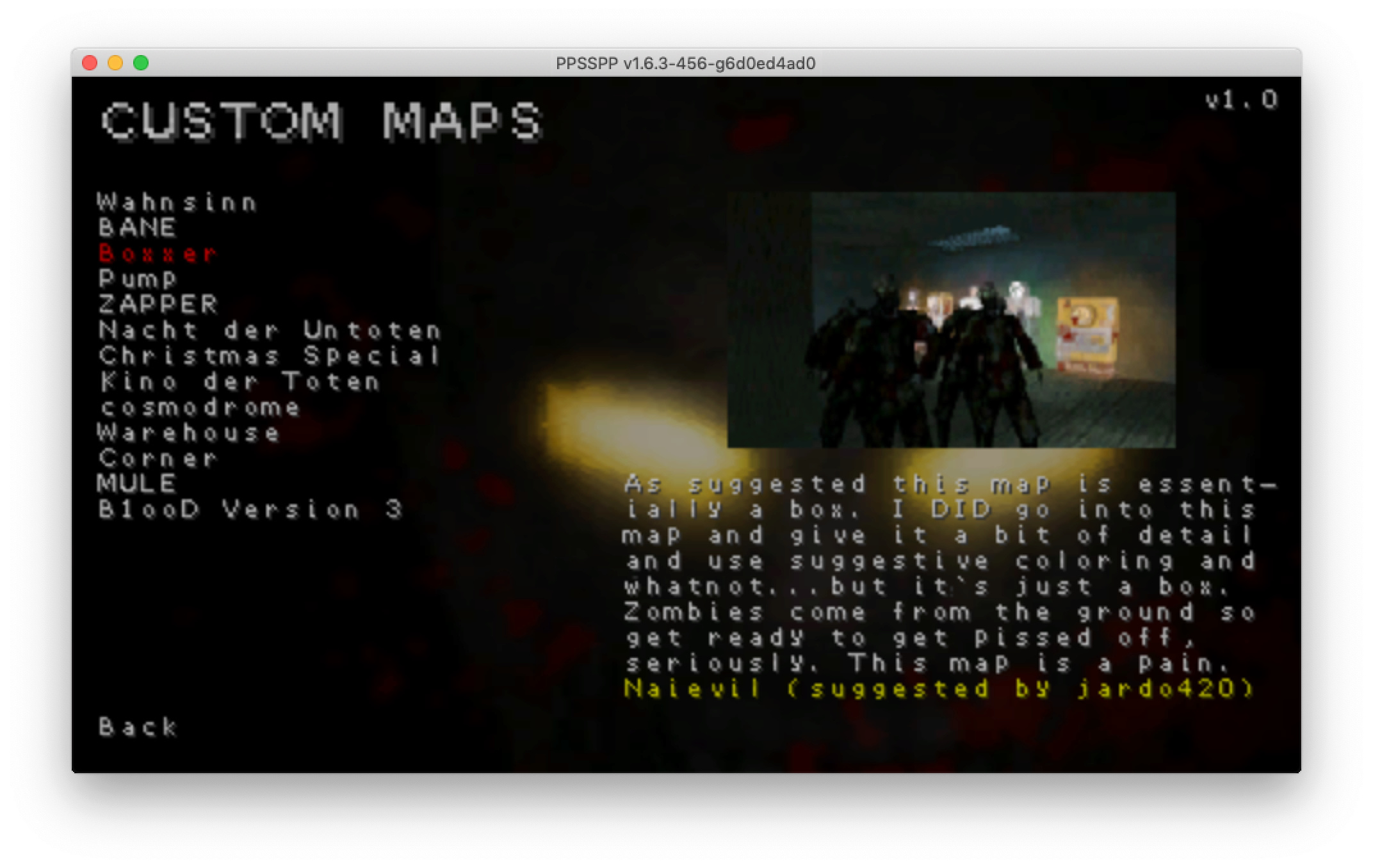 Starting in February of 2020, effort on menu parity across platforms was made, as well as work on a new Custom Maps menu designed to allow for mappers to have a custom map title, description, thumbnail, and self-credit section drawn when highlighted. 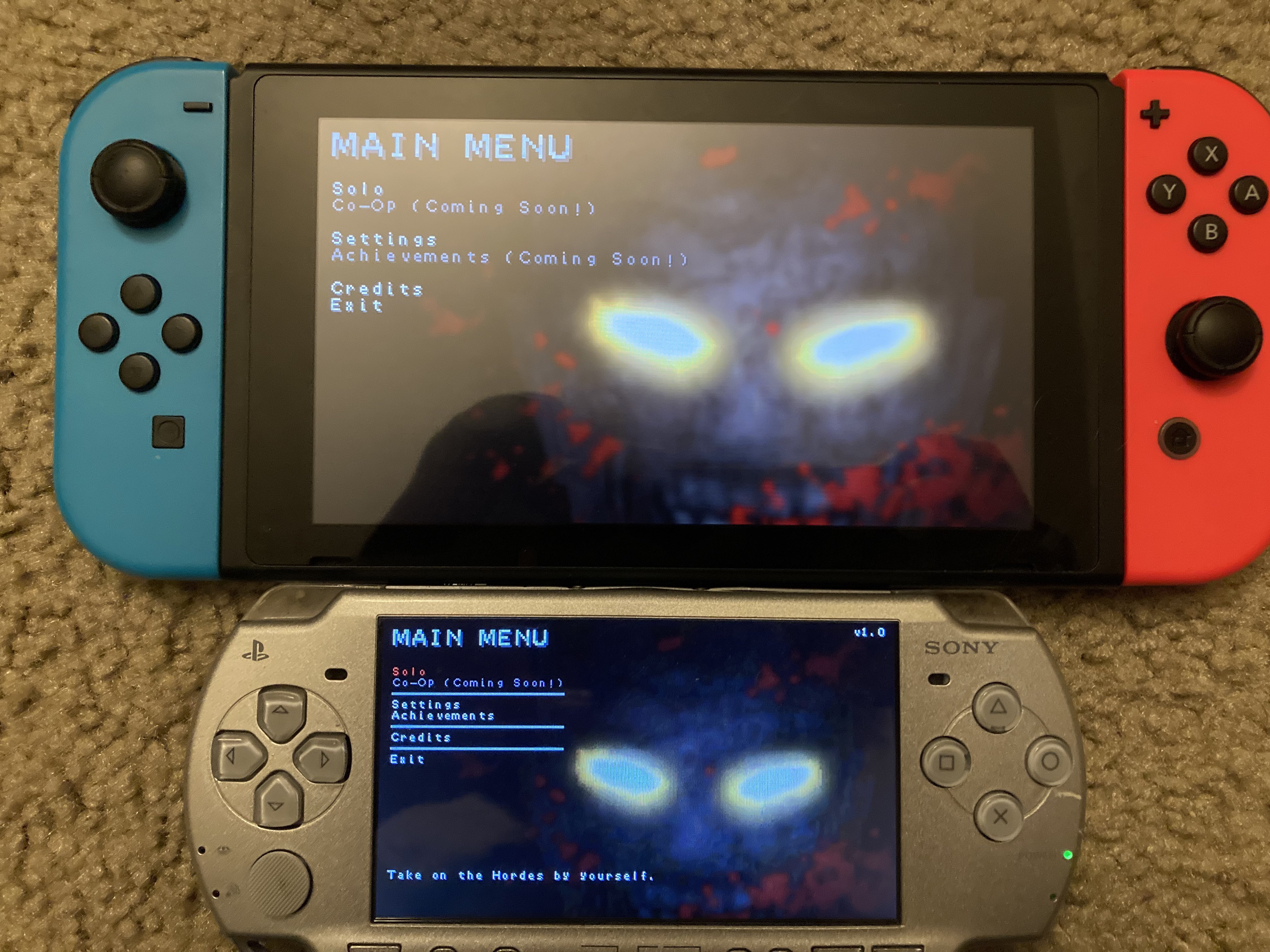 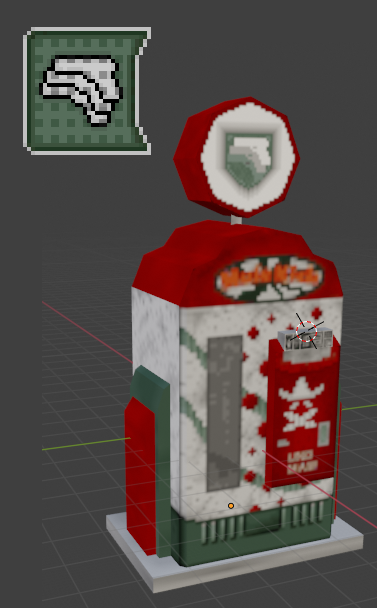 Mule Kick was added, completing the line-up of perks from World at War and Black Ops! This brought the total perk count up to 8. Not much else to say really, lol.

In April 2020, Hellhounds were added back into NZ:P Reboot! They are pretty much accurate to World at War, including round rarity and the 'fire' variants.

Also in April 2020, the M2 Flamethrower had its functionality added, and unlike in NZ:P beta, functions near identically to how it does in World at War! Choose to create a ring of fire on the ground or blast Zombies directly. Framerate may vary.

The Waffe also got some love in April! Not much to say about this really.

In late April of 2020, a "competition" (most entries were added) was hosted for Achievement and Loading Tip ideas. Most have been added but work on this is still on-going.

Big thanks to the following people who made this happen:

In May of 2020, the Nintendo Switch build of NZ:P came out of a hiatus and received several polish updates and came to a state of near-playability. Work is still being done on the port, but it is available in it's entirety on the NZ:P GitHub page. Big thanks to Naievil for having maintained and being responsible for the NX build for so long.

June of 2020 began some OCD-level improvements to the HUD. Including restoring the world and 'Round' text added in the Unofficial Patch - Crosshairs now color red when facing an enemy, and slowing fade out when moving. 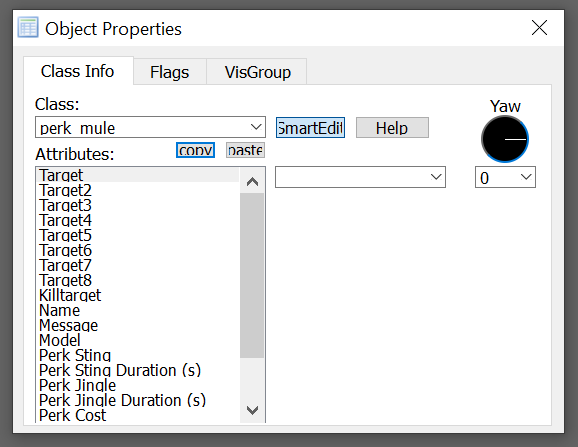 In late 2020, efforts began on allowing for mapper-led customization of various entities such as Perks, the Pack-A-Punch, and Barricades. For example, mappers can now change the model, cost, and animations for Perk machines, and even add custom jingles.

This concludes every major feature update that is currently fully implemented into the project. Below are features that are currently being worked on and not yet finished and pushed to the master GitHub branch! 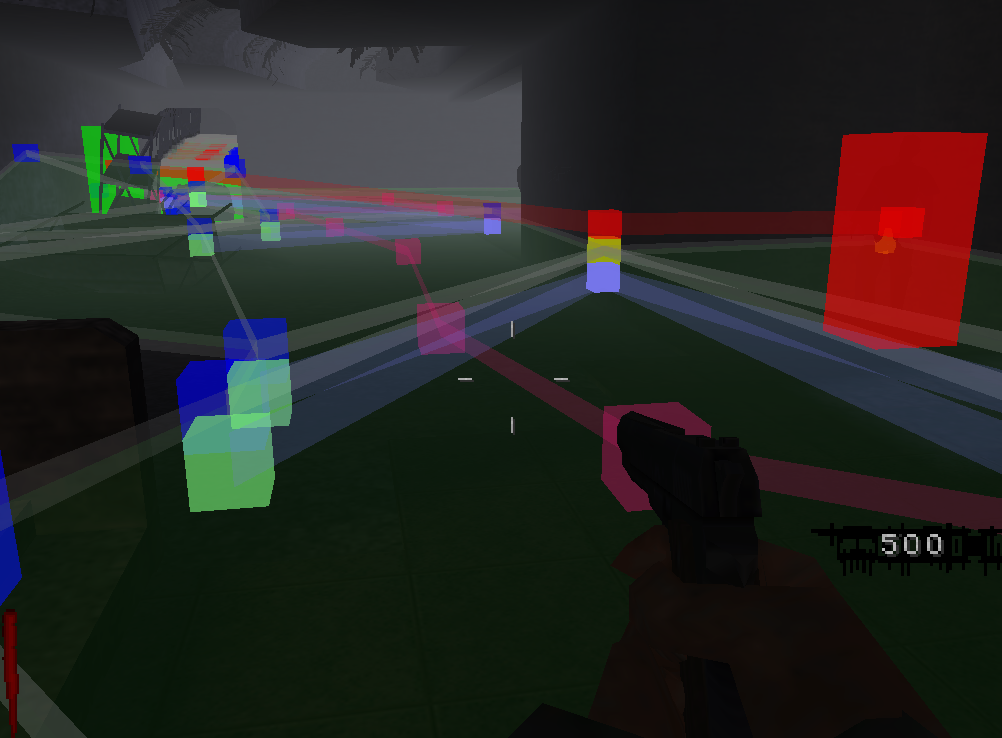 Auto-generated Navigation Meshes are a proposed successor to the current manual way-point style of pathfinding existing in NZ:P. Handled by blubs himself, the hopeful end-goal is to have fully-automated generated navmeshes on PC that can be used on all other platforms. Currently there are only a few remaining bugs before it is considered completely functional on PC, then progress will be made porting it to PSP and NX. 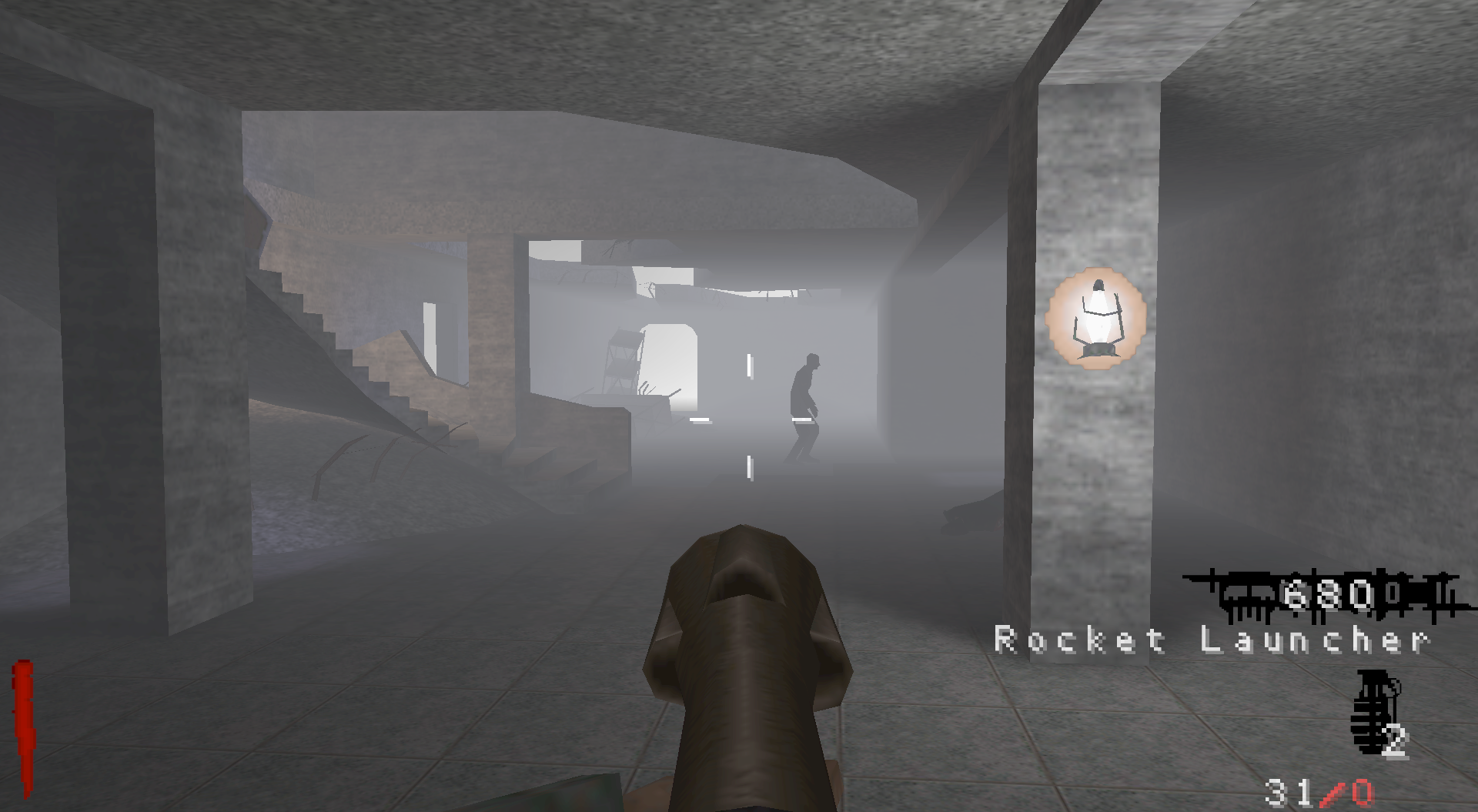 Data-Driven weapons are, put simply, custom weapons that are read from a file when the game/map starts up. This will allow for mappers to have any weapon they'd like in their map (provided they have the assets made, of course). Whether that be an idea from an existing game, or a new unique weapon entirely, it should be possible here (with some limitations, that will be open to lifting upon initial completion). 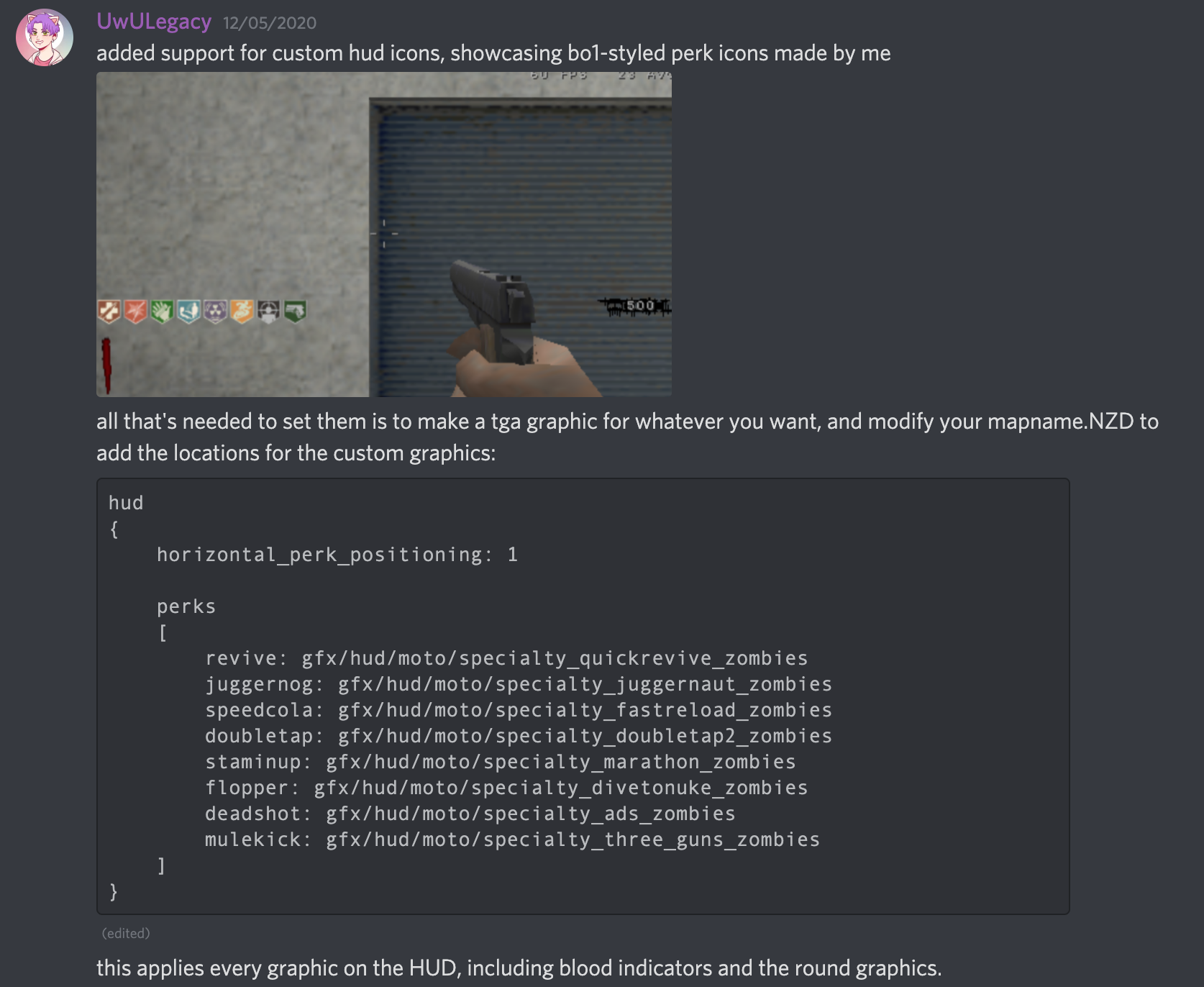 .NZD files are another new play-thing for mappers to experiment with. They provide the ability to change most things about the game, like zombie health/speed, Power-Up rotation, starting points, and even some HUD customization abilities. Beyond this, there is still much more to come in the future! 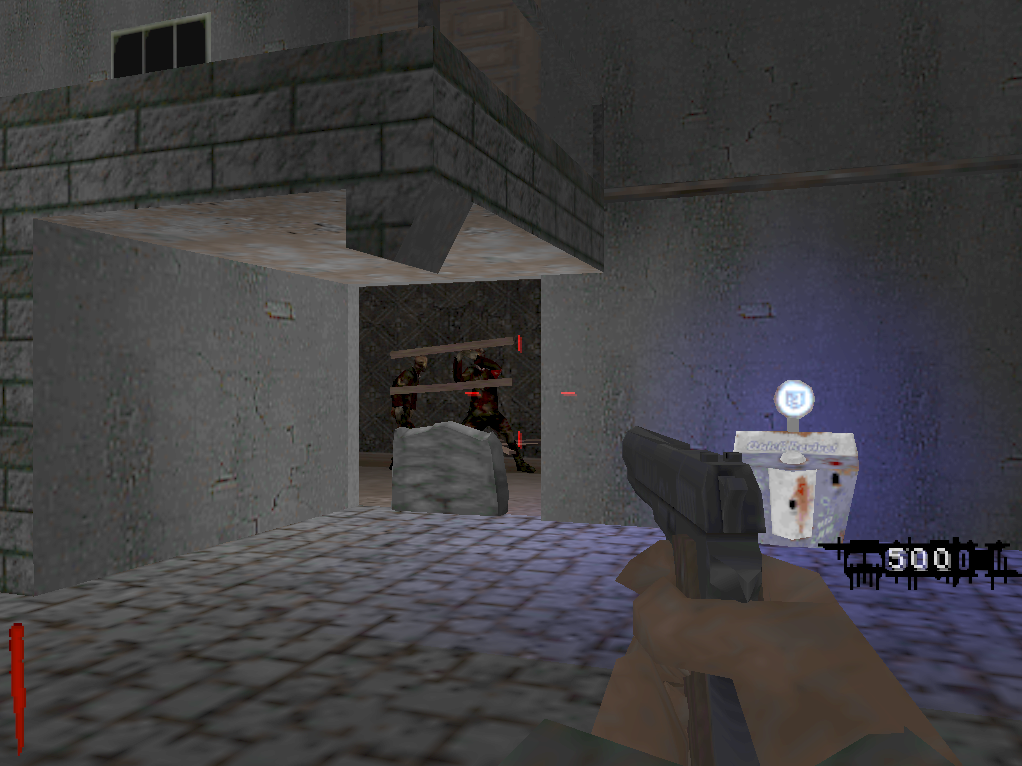 Efforts are being made to bring compatibility with NZ:P Beta maps to NZ:P Reboot! Player size, old entities, etc. are all adjusted and converted on-the-fly in an effort to have seamless support for both old and new map styles! 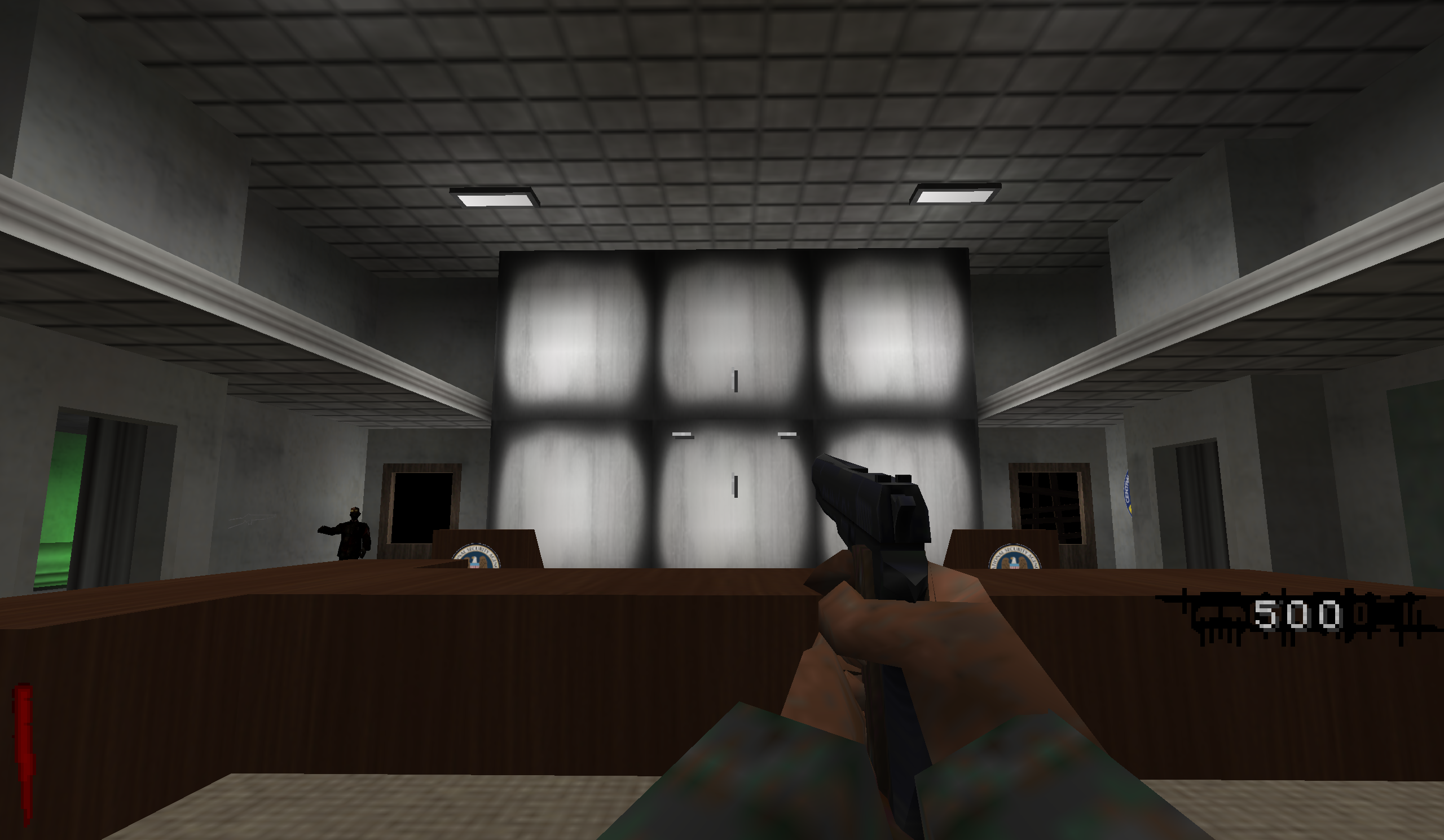 New maps are being worked on! Efforts are being made on updating Nacht der Untoten, Warehouse, and Kino der Toten, as well as the development of Shi No Numa, Five, and Verruckt. Progress has been slow as getting the game itself ready is of a higher priority, but the developments of these maps is still worth stating. 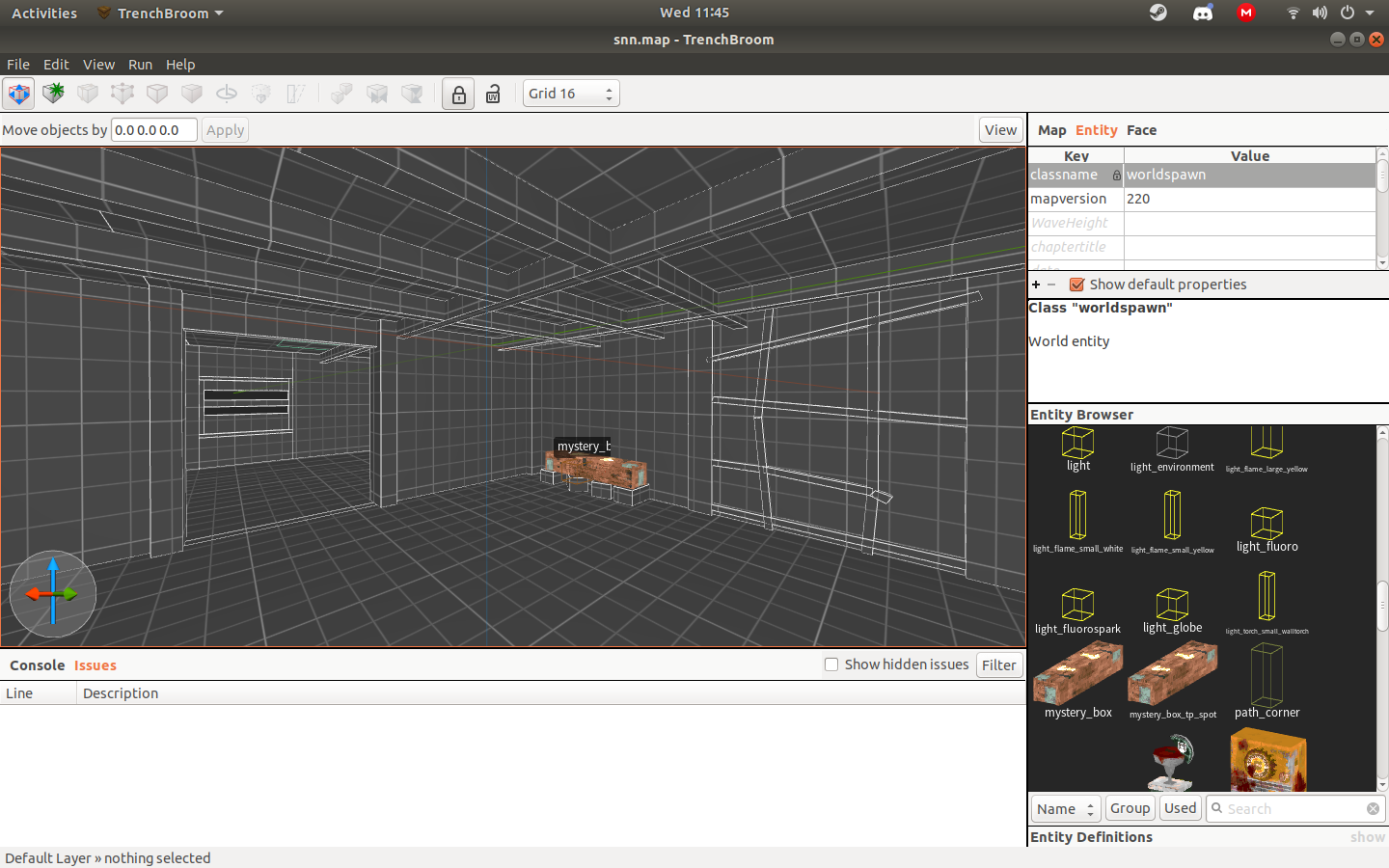 That is pretty much everything of importance you, as an end-user/fan, would care about revisiting this project. It is important to note though that there have been a lot more changes to the code including bug fixes, optimizations and general re-writes to make it easier for someone new to understand coming in.

There is one more thing to discuss, though.

WhErE iS tHe ViTa PoRt 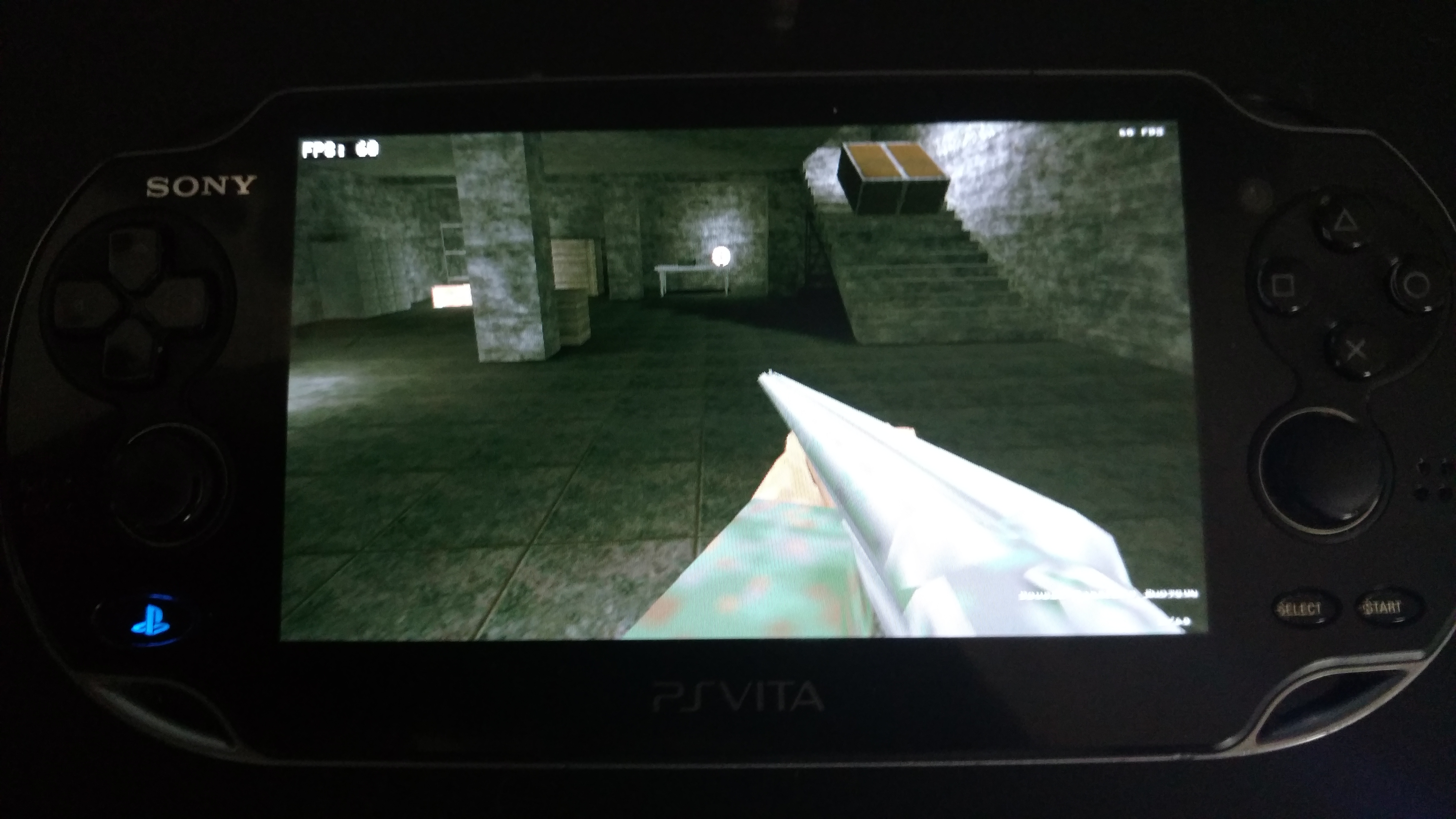 It became increasingly clear while working on the Vita port of NZ:P Reboot that I personally was unqualified at the time and working on porting a project while it is in rapid development is not a good idea. With that said, the Vita build stopped receiving attention shortly after the progress post was made.

Regarding the Vita, the current plan is to get the PC, PSP, and Switch builds of the game on-par with each other and near a state of completion. At that point, instead of going back to port a native Vita build, I decided attention would be better suited toward adding support for the Vita's features to the PSP build itself (such as the resolution bump and support for the second analog stick).

It may be that later down the line a proper PS Vita build will come, but it is not a card in my deck at the moment.

I'll try harder to update those of you on further updates to the project. Though I won't make promises, I am clearly really bad at those, lol.

I once again recommend that if you'd like to stay up to date on the project, to join the Discord. Everyone there is really cool, and we have a channel linked to the GitHub that'll have a message posted whenever an update has been made. No pressure, though.

Dead? Nah. Check out the current progress on the new, squeaky-clean NZ:P Reboot!

Featuring the NZ:P Demo release, exactly 4 years after our first release! You won't want to miss this!

First Release. Download RAR, then extract the nzp folder and replace the original one.

Now for the first time in nazi zombies portable history, we are going full on open source! Enjoy this Christmas gift. Remember to give the credit where...

Hello Nazi Zombies Portable Fans! After what was a lengthy hiatus, Jukki, Ju[s]tice, and I (Blubs) are proud to present to you the Demo.... ...exactly...

This new updated release adds jam-packed features to ensure that you'll be playing nzp for centuries to come! New features include... -Pack a Punch- Upgrade...

*NOT MY ORIGINAL FILES!* Place the sounds folder into the nzp folder in your NZ:P folder on PSP and or PC. you DO have to convert some to mono. Just use...

Oh gosh, I hope we can see a (legally distinct) fork of NZP added to the Quake Enhanced add-on page someday :3 If you do contact Nightdive about that, please let us know what they say! ;D

then no, this mod is not dead, there is also a reboot version

Hi! I'm a mapper, a codder and I'm willing to help with the mod, I know the mod is dead but I'll do my best to continue with it, if you agree, you can send me a private message!

Will There ever be the possibility of a 3ds port?

Unless someone ports the current engine to 3DS, no

3 years ago, i was playing Call of duty world at war. i remember it so clearly. Natch der untoten was the map, yes it was. so i was sitting with my ps3 controller in my hand on some ridiculous round thinking to my self. "wouldn't this be awesome if this was on the go?" so then i searched for nazi zombies for psp, yet at that time there was no such of an idea of it. i grew depressed. - _ - i was clouded in despair. But you the nzp team gave me hope again that i will still be able to slay zombies…