It is the near future, Earth is gone and humanity is once again at war over resources.

We are currently working hard to get the first playable beta out. This is not a mmo.

As promised, here we go with the detailed listing of The Coalition's units!

Of course AureaSection wishes you all an happy new year!

Coalition's basic fighter, it's their best interceptor and light multirole ship, being good for almost any duty that doesn't require engaging under heavy AA situations. Fairly sturdier than its FCA counterpart, it's similarly equipped; it can count on an higher payload and protection, lacking a bit in terms of agility and top speed. It's basically built over a lightened chassis used for the Lacerta medium fighter.

The Lacerta MF is the successful and reliable fighter developed by Coalition's engineers, that serves as a base for both the lighter and the heavier variants built on its chassis, the Gecko and the Alligator.
This fighter is average above all. It doesn't excel but neither lacks in any aspect, offering good firepower, fair agility and protection. It can work as good as a bomber as well as an heavy duty dogfighter, featuring a couple of level 2 hardpoints capable to mount both primary or secondary ordnance.

A bulky beast built by adding two more engines along with level 2 hardpoints to a Lacerta and proper hull reinforcements.
Its mass can reach 90 tons when full loaded making this fighter real hard to pin down, due to its armor and chassis strength.
It has been designed for long-lasting life even under heavy AA fire and its only concerns should be Warthog or Cormorant's level 3 weapons. Due to its mass, it suffers inertia a lot, but it is very effective in lift/strafe maneuvers; it's surprisingly good at maneuvering on the spot, especially if coupled with proximity rockets, that make it really dangerous even for lighter fighters underestimating its firepower. The latter is certainly outgunned in level by the Cormorant's guns, but spots much better flexibility in its payload configurations, featuring many more hardpoints.
Of course it's a good bomber (albeit somewhat slow) and the pinnacle of short range defense. 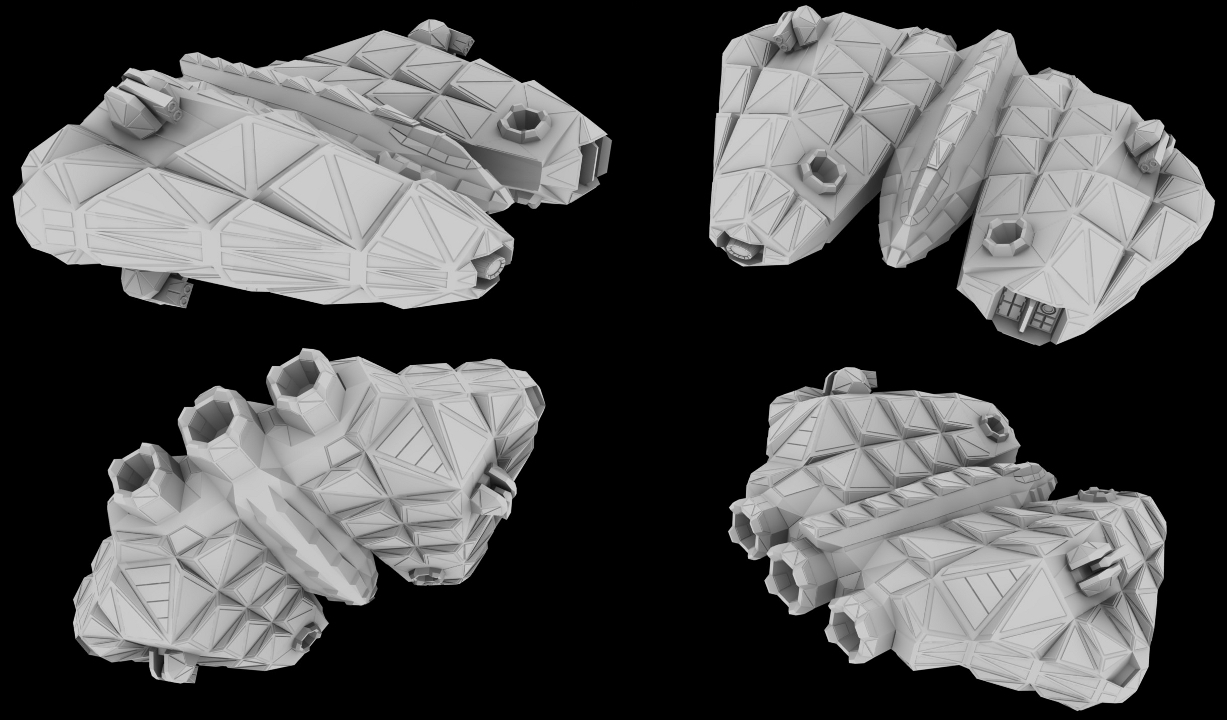 The “Ank” or “Ankylo” as named by its pilots, is somewhat particular: its hull is partially asymmetric, it is the only fighter that relies on four light level 1 turrets to cover itself, is the only non-capital Coalition ship that can carry a level 3 weapon and it's the only fighter that has 2 crew members (along with the pilot there is a gunner).
This ship comes in two units per wing, it's really dangerous for lighter capital vessels and due to its AA turrets, difficult to deal with for missiles and enemy fighters. Its maneuverability isn't that bad for a ship of similar mass, but definitely it spots the lowest top speed among the fighters of NSW. 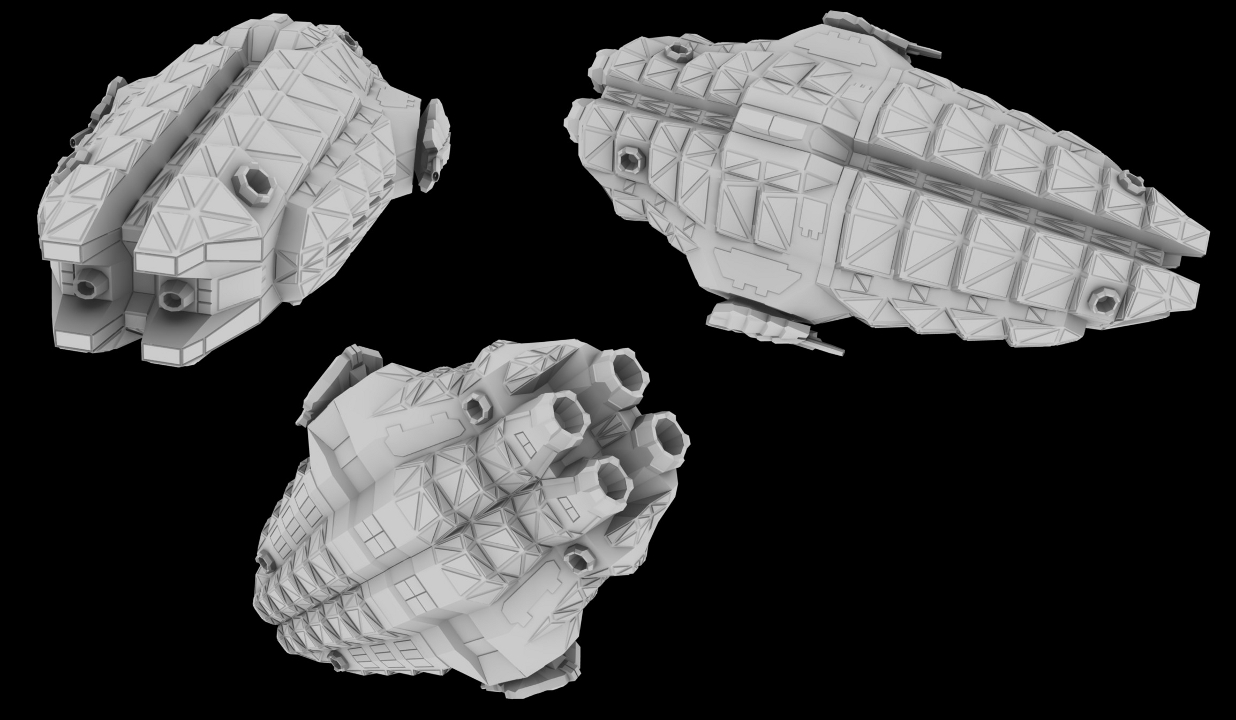 The smallest Coalition capital ship, it's a corvette; much lighter than a Barracuda, it is of course cheaper and rivals the Ank in threatening FCA dropships and the enemy Destroyer class itself. It spots good AA capabilities as well as unexpected agility for its size, making it difficult to be targeted by the main gun of a Barracuda or by the turrets of a Mistral and at the time makes it dangerous for fighters traveling in its sights.
Its anti-capital ship capacity is boosted also by the presence of two level 3 missile wells. 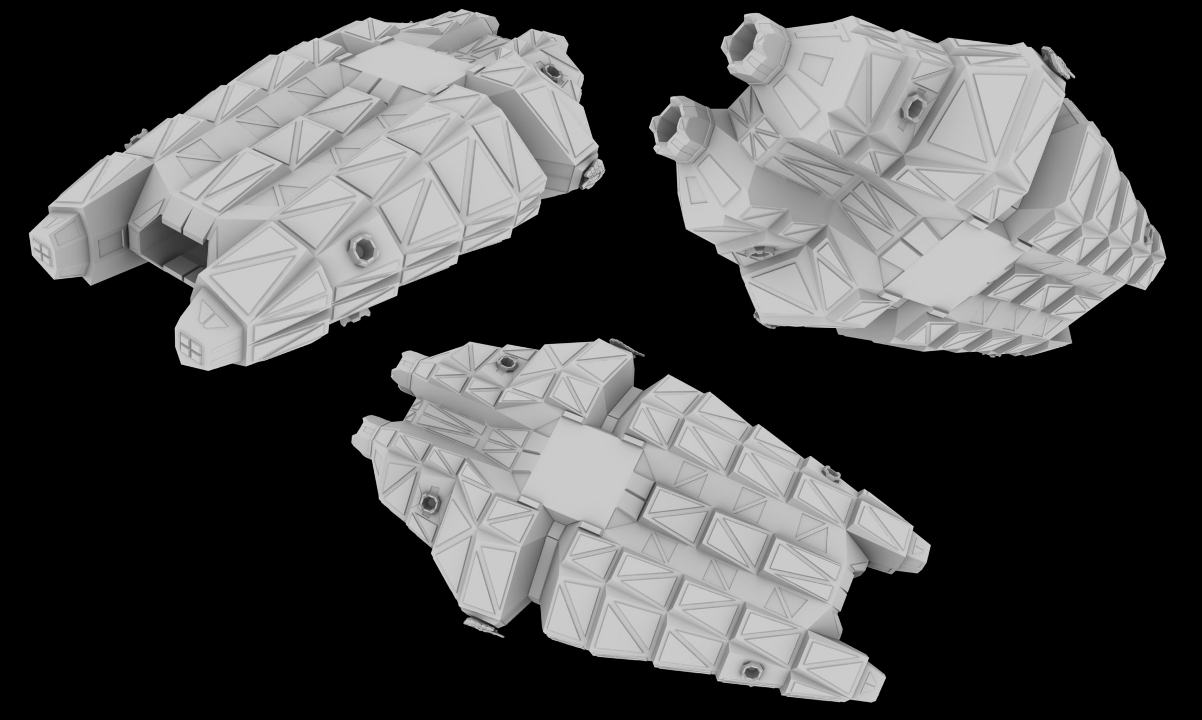 The pinnacle of Coalition's operations, perfect counterpart to the FCA Sepia dropship; although being sturdier and slightly better armored, it is similarly equipped, being capable to host 1 wing of fighters, spotting two AA turrets and a couple of missile wells facing forward.
The landing pads are displaced one on the top of the middle section of the hull and the other one in the opposite lower-facing side. Fighters take off via the forward-facing launch tube. 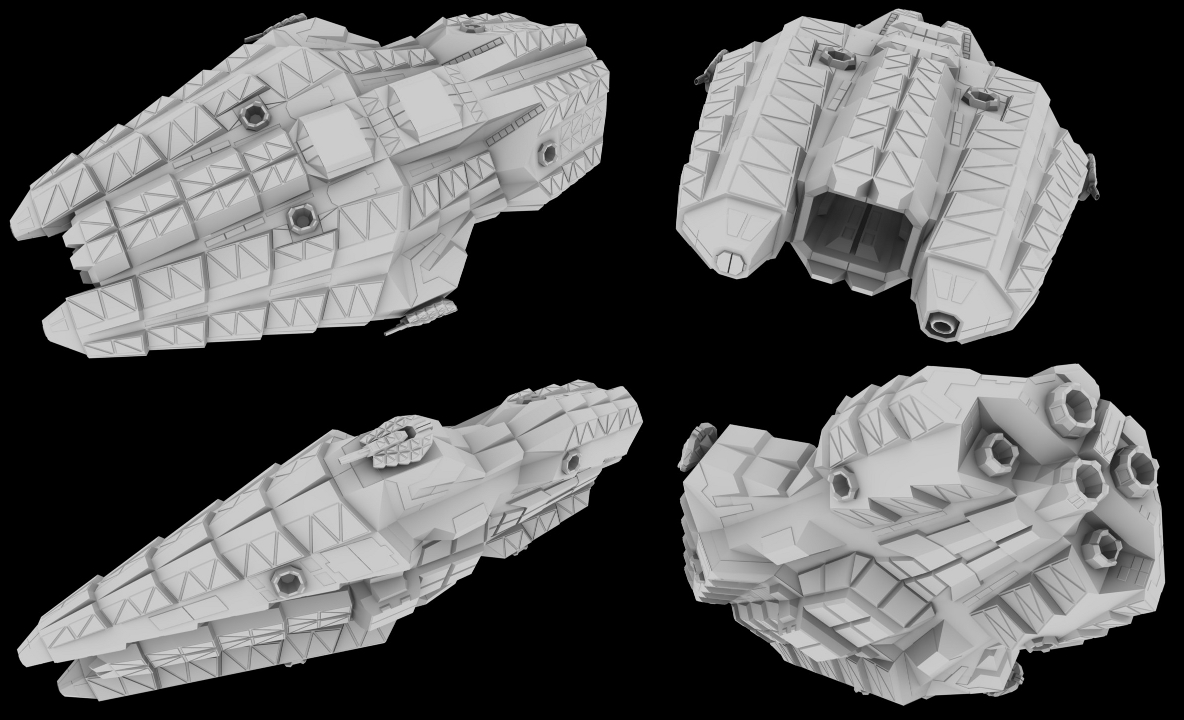 The “Sarco” is fairly lighter, cheaper to produce and maintain that a Mistral and it will show up earlier on the battlefield than the heavier FCA vessel.
It is however almost equally dangerous, but lacks of turret mounted anti-capship ordnance, which instead fits in the front wingtips; this forces commanders to aim the whole vessel to take a clear shot against larger enemy vessels. It also lacks of one heavy AA turret and the number of light missile wells is limited and not well widespread among the hull if compared to the Mistral.
Its fighter bay is also half of the enemy rival, allowing only two full wings of fighters to be carried and supported in battle.
The number of landing pads is the same of the Bullfrog dropship and the launch tube is only one as well.

Today we reveal the complete list of FCA units in detail.

A new video has been released showing our internal beta development stage along the uncovering of new ship classes.

Today we uncover some of the latest addictions to the gameplay: the damage system!

Oh. this is sad news!!! Sorry to hear the man passed away. I was so looking forward to this one, too. I hope you guys will eventually get back to this. It was looking EXCELLENT. How sad for his loved ones and family. Sincere condolences. :*(

Very sad news... this game wos looking very good in gameplay and graphics.
If the team will want to resurect it, just say they word!

Yep, we dropped the project, we.. we were working on it for too many years and with still a lot of things left to do.

We're getting out soon with a simpler game, with which we hopefully use to fund Naumachia or other projects.

I hate to be the bearer of bad news guys, but this died a few months ago. Their website kept getting hacked, so they pretty much had to nuke it.

They, however, do seem to be planning on getting back to it eventually. But until then, they're working on a simpler game, a tower-defense game I think.

hope there will be something new soon :)

sadly seems not.. was a very promissing game. Does someone know an alternative to this? I mean a fast paced, acarde type space battle game?