Mutant Gangland is a fast, neat and simple turn-based-strategy game where mutants fight robots . Build units, Conquer buildings and use them to Fund your army. Battles are short but the game packs 50 quick battles and a level editor to design your own maps. 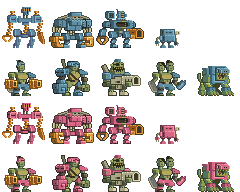 It's been a while since the last blog post (5 months almost) and this is due to several factors. I won't go into many details but the short story is that i had to relocate to a new city on the other side of the country and find ways to make rent. Now that things have settled I'm back to work and I have something neat coming your way. And the next alpha is getting closer and closer. So, here's what you can expect to happen in the upcoming weeks:
Editor update:

And, probably the biggest thing yet, Multiplayer support!

Multiplayer: This is something I wanted to try for a long time but never had the chance to do so. Although early campaign support has been added and the commander logistics are in the code it will take a little while before that part of Alpha 2 will be ready for the public. Thomas is busy pushing pixels for the Penarium (A deviously deadly platformer game by SelfMadeMiracle) and hasn't finished drawing all of the animations for the commanders so, until I get those things, I'm free to work on everything else. Soooo why not use what I already have available and get multiplayer working? So, here's my plan for the next 1-2 months on this subject: I already have a basic multiplayer implementation of the contents in alpha 1. One player can host a game and the other can connect to it and duke it out. Over the next few weeks I plan on releasing via itch some new builds in the following order:

For the first release I'm interested in seeing how the game performs, if it lags, if there are any problems joining/hosting or if any desync happens between the users as well as see what kind of caveats occur. For example, due to the game's open source (anyone can access the code, hack it, change it, etc) I find myself not knowing how to prevent cheating, other than relying on the HOST server to handle all the logic of the game and provide the data/info for the game. What this means is that the client (the one joining) will not use any locally stored data (unit stats, prices, images). On another note I'm also interested in seeing how the, albeit small, community of supporters (you guys) react to this feature. In a perfect scenario I'd like to have my inbox filled with request for features, tournaments, praises and maybe even setup a ladder it remains to be seen but I'm hoping to get my bum handed over by some of you. So what do you think? Excited for the multiplayer? Do you have any questions or suggestions about the implementation?
~ Zapa.

Road to alpha 2 and streaming

Mutant Gangland Alpha 1 has been released on January 28. Features for the first release and trailer.

I just reviewed the game, feel free to check it out: Halfrailed.tumblr.com

In linux the game asks for libtinfo and libncursesw. These libraries doesn't exist in most of the distros' repos. Can you include it in the "libs" folder?

Ultra: got your mail. Not near my linux box right now. Will be home in 'bout 2 hours.

Hi ultraviolent. Can you send me an email at info [at] mutantgangland [dot] com so I can send you a version with those libs? :)

Hello BacioiuC, Please tell me where I can download a demo of Mutant Gangland.
Thank you!

We're currently doing a soft-launch of the first ALPHA version at www.mutantgangland.com.. Please, before downloading, read the information available on the alpha page.

I will update the indiedb page on Monday, with new information.

Should be a good game! I am sure it will get lots of love from a lot of people.

I hope so too! Can't wait to factor in all the feedback for the sandbox battle mechanics. Thanks for checking it out.

Sentinels of the Multiverse Turn Based Strategy

Crate Before Attack Turn Based Strategy