Midair: Community Edition is a fast-paced jetpack shooter set in a breathtaking new sci-fi universe. Use movement and physics to your advantage, outwit your enemy from every angle, you'll never look at a shooter the same way again.

Movement in Midair is an art. It's a flow. It's a learned, practiced skill that when you know it… you just feel it. Using your jetpack and frictionless boots, launch high-speed airborne assaults, expertly dodge enemy fire, and soar from hilltop to hilltop. Free yourself from the ground or become a quick frag for your opponent. The jetpack draws from your armor’s energy pool, so strategically manage your use of the jetpack and weapons to ensure your battle advantage. Depending on the situation, adjust your jetpack from pushing you upward to giving more maneuvering power. Veteran players know how to manage their jets and energy by instinct.

A team without coordination is like a shooter without jetpacks. In Midair it's critical that you coordinate your assaults for maximum effect. Take down their flag defenses one by one to expose their flag for a quick grab. But remember, you'll need to keep your flag home too. Enemies who have spent hours studying the terrain and perfecting their movement will race in, grab your flag, and get out -- and FAST. With the right team and friends you can depend on, this will be a breeze.

Get ready for a new experience in a shooter with a lot to offer. Suit up. Jets on. Fly free. We'll see you in Midair: Community Edition.

An introduction to Midair: Community Edition

Midair: Community Edition is a super fast paced first person shooter which has one of the most addictive movement mechanics ever seen in a game, and is often referred to as an FPS-Z, due to how much time the player spends engaged in aerial combat utilising the z-axis of movement, and its importance to being a successful player.

This game is a standalone successor to Archetype Studios’ 2018 game ‘Midair’ which attempted to revive a genre long left dormant since 2012’s Tribes: Ascend. While Midair managed to breathe back some life into FPS-Z gaming, it was plagued with release issues including a buggy progression system, unsatisfying vehicle play and balance issues which ultimately lead to a fairly quick death upon release.

A passionate group of skilled volunteers were granted permission from Archetype Studios to create a new version of Midair – focusing on the parts that worked best and polishing them up as a standalone game, while also adding new content including new maps, game types and a much heralded practice mode which allows players to record and share routes, and have bots run routes for players to defend against. The new team recruited additional members of the community including a few who worked on the original Midair and set to work to produce what you see here. 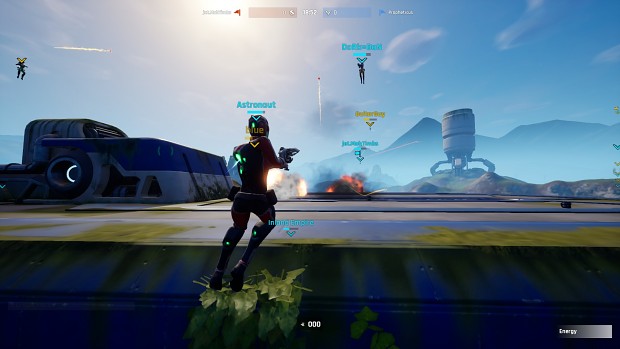 If there’s one thing that stands FPS-Z games apart from all others, it’s the movement. Talk to any player who has spent more than a few hours playing Tribes, Legions or Midair and they’ll tell you that there is nothing quite like it. It’s like a built in speed running competition merged into a competitive shooter. It’s not an easy skill to learn in your first hour of playing the game, but once you do you’ll wish it was a feature of every game that has hills.

So how does it work?

All players have jetpacks which launch them into the skies, then on the way down they use anti-friction boots to slide or ski down hills and slopes to build momentum. Learning to master this movement as well as the different map terrain to know the fastest ways to move from place to place are two of the biggest keys to dominate in Midair: CE.

Midair: CE also has a heavy focus on projectile weapons, placing a greater amount of importance on players’ ability to lead their targets, or predicting where they will land. Knowing when to select the best weapon for the right situation is paramount, as is knowing when to engage, and when to wait for backup. Unlike the original Midair, all items are available to new players immediately. There will be no progression system to unlock weapons or other items.

Version 1.9.1.12184 of Midair: Community Edition is now ready to download. This incremental patch resolves server stability issues, as well other other...

One of the most popular ways to play Midair:CE is via a 5v5 CTF pick up game. In contrast to public games where you can play however you like and take...