Design your own character to attend a magical school. Learn spells, brave the dungeons, and try to get a date for the May Day ball. 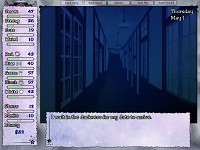 We've been teased with all the possibilities...

But now, at last, the game is ready for launch!

You can grab a free demo from either the Magical Diary website or the downloads section here. Demos are available for PC, Mac, and Linux, and cover the first month of the school year. You'll also have the chance to play with the character creator and upload your designs to the online yearbook.

It's been a long journey and a lot of work to get this far (The game text now comes to about 150,000 words. You could fit two books in there!) but just because the game is released doesn't mean it's all over. When you buy the game, you'll receive a license key for access to the online updater, which will be delivering patches and new content in the future. There are already a few goodies lined up for later release, as well as improved support for modding - and, of course, fulfilling crazy fan requests. And then eventually there's the next game in the series to start working on...

So come along and join in the action! 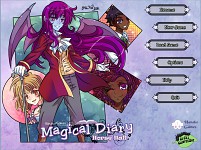 Exploring the consequences of writing an RPG with a huge range of possible solutions to any problem.

As the school year goes by, the dungeons become more dangerous - and so does your love life! Beware of unintended consequences.

Without the tight structure of a visual novel, you can design your own approaches to dungeon challenges and freely interact with characters. You might...

Introducing some of the major characters from the first entry in the series.

Play with the character creator and live out your first month of magical school! Characters can be uploaded to the online yearbook at the end.

Play with the character creator and live out your first month of magical school! Characters can be uploaded to the online yearbook at the end.

I liked your game style miss Hanako, I shall give it a try. I wish you luck in your projects.

I've bought this game and played it a few times, and I think I can say with reasonable certainty that it's really, really good, but not perfect. I liked the wide range of paths and possibilities, different choices and such. The characters are all well-developed, and the story is quite engaging, worth playing through multiple times.

I must confess some measure of disappointment, however, in the dungeons feature. I really, really like the concept, but the implementation is rather shallow. I felt that had the dungeons, and the methods used to escape them, reached a greater level of complexity, I would have been more satisfied.

Overall, I recommend this game to those who would like to see an well-made, well-presented visual novel with deeper gameplay than one might expect of that genre. But remember that is exactly what you're getting, nothing else.

It is good game there are many possibilities plus it is diffrent in a good way.

This looks fun. I would say these type of games are my guilty pleasure but I can't even bring myself to be guilty, just to enjoy them. Can't wait!

can't wait for this!! I like theses type of games :)

it is looking great the hardest thing about visual novels is getting the player emotionally involved in the story in some way or another. i was also wondering if your character can have same gender relationships besides a guy and girl relationships because it would open up to larger audience if you do so. Story,(Character design,Character interaction,Character Traits/aspects/Personality),setting,Routes/Paths a person can take to get to a end or certain scenes, and emotional depth a person can get into is most important parts of a Visual novel.

A good idea. While I personally would not do the same-sex thing, it'd be good to have the opportunity to do so. Perhaps even developing a truly deep relationship without being "partners" per-se would be good too. Like reaching a point you'd call someone your "brother/sister" ect. so you can have that extremely complex, deep and involving relationship with the same sex while not being "in-love".

Yes, opposite-sex, same-sex, and possibly even relationships that don't count as either one of those. :)

Is same-sex/etc relationships confirmed? I would like it to be confirmed...

It is looking good, I like this kind of game