An update summarizing the current state of development and what to expect next: New visuals, basic RPG mechanics and smart enemy spawning.

Hey everybody! Thanks to all who played the alpha versions and gave me some feedback on the game. It is really important for me to gather outside opinions of how it plays because I am afraid my view on things might already be cloudy.

So the latest alpha I released here should showcase the overall gameplay and game flow to expect, the amount of skill involved and the pacing of different items I had in mind initially. The multipler whose design I showed you in the last news update is now implemented and fully functioning as intended — what a relief!

Although things tend to change and the initial thought you had might not turn out all too entertaining in the long run. So that's why I will keep adding to what’s there already and see how things go, how much fun they are. And if they suck, I cut them.


I was made aware that the pixely look of my tiny sprites doesn't go too well with the typography and other HUD elements. After going through a bit of denial I have to admit that it's true. Fact is I am not good enough at drawing to depict what I got in mind, only with pixels I felt somewhat comfortable. But that's history now anyway. I am going now for a different look, still minimalist but more towards a vector drawing look and away from pixels. 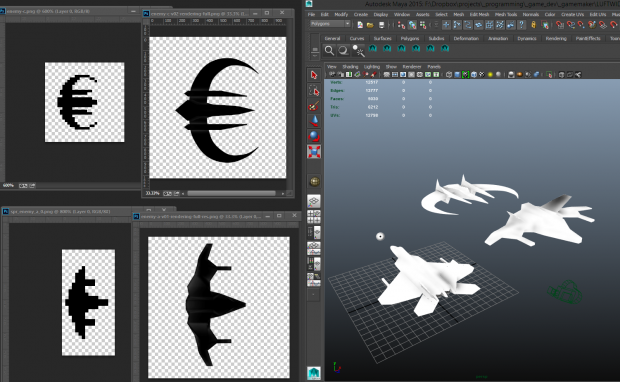 For this change I tried to recreate the models I got so far in 3d-space that their silhouettes still read like the pixels but also are easier to change in size and eventually I make use of the 3d models in title screens etc. down the road as well. So it’s good to have a poly-model in case I need one

This change also means that I am trying out a bit bigger sprites so it's easier to make out and hit enemies while at the same time it's a bit harder to avoid bullets.

The change also permits now for some more "glossy" effects that should be a far cry from pixel-crumbles in the current versions, especially layering additive light effects on top of each other and other stuff I know from my work as VFX compositor and colorists. Yesterday, for example, I coded a very customizable lens flare object which I will be improving on the next couple of days. 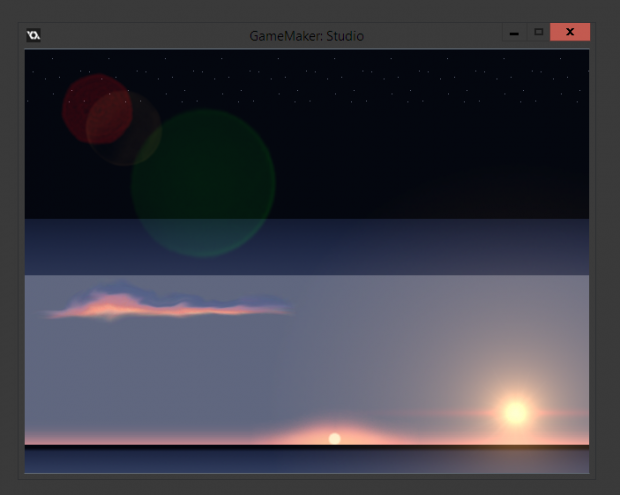 This also means that the current minimalist (if not ugly) background might be replaced for something more appealing than TrueColor pixels from 1995. ;)

If it looks incoherent and/or shitty, I'll take it out and come up with something new. But I’d rather invest in a new visual style now than a few weeks (or months) down the road where this would be much more labor-intense than it is now.


So I've thought a while about gameplay and played my fair share of a total of three to four hours LUFTWIDERSTAND and it becomes a bit daft and boring after while, even with the new machine gun item. In the last update I was contemplating the implementation of simple RPG elements, and I guess that’s what I am going for in the next coming releases.

In practice this means that frags grant you experience points which in turn allow you to upgrade your ship and/or the score multipler and can choose between different … let’s call them perks which should reward your own way of playing the game. Perks might be being able to charge your weapon instead of continuous fire or collisions with enemies grant you health but bullets do much more damage, etc.

Of course, this is not much fun with the same old enemies we have now. For me this means to create some new, tougher, enemies and also to add a little spice to the spawn controller generating the enemy waves for you which, in its current state, it functional at best. The enemy waves will depend on how long you survived so far, what perks and weapons you have equipped, your health and a little bit of luck. A lot of work, so don't expect it to perfect the first time.

So the upcoming alpha versions should introduce new visuals, RPG-light mechanics, perks and an enemy spawning AI. Not all at once but bit by bit, byte by byte.

And feel free to comment if you got some ideas!