Mechanics come from a simple problematic: how to control a group of characters in real time?
You play a flag bearer as LEADER of his army composed of different Soldiers types. They’re following you in a single-file line, we call this displacement Snake, in reference to the eponymous game.

It is a game about battle between 2 players mixing tactical and action. You fight in an arena and the goal is the same as in Chess, neutralize or eliminate the opponent LEADER.

LEADEN SKY BATTLE Gameplay is focused on tactical moves. Soldiers attack any close-by enemies but they need you as guide to earn victory. Depending on your army composition and the opponent one you will have to plan different strategies.

As LEADER you have the ability to gather mates. You can pick and lead them on the battlefield. Those Soldiers will follow you one after another and create a Chain. You can choose the number and their position.

During the battle you can lock your army in Formation to move it into a single block, like a regiment. This manœuvre is convenient to fight but slows your movements. In Snake you move faster but you also are more vulnerable. If your opponnent cut your chain he could steal soldiers.

You can also leave some characters on the board, they will not move until you pick them again but they will still attacking ennemies at range. It allows you to occupy the field adopting a defensive posture.

The choice of your soldiers, their position in a Formation and the timing of movements are the keys of mastering LEADEN SKY BATTLE.

You have the choice between 4 characters types to develop a strategy. Those soldiers are archetypes with specific abilities:

6 Games Mode are available for the moment. Some of them have specific victory conditions.

BATTLE MODE
This is the regular Game Mode. You fight in a rectangular arena during several rounds. The goal is to neutralize or eliminate the opponent LEADER.

TUTORIAL
A beginner's guide to learn the game mechanics. It presents you each character actions, how to make a Formation and the basics of battle.

TRAINING
This Mode is a place to test new Formations or just to have fun. There are no victory conditions here and you can pick a lot of characters.

CASTLE
The arena contains a fortified castle in its center. You can either occupy it and recruit the garrison inside before your opponent, or get around and attack him from behind. The goal remains the same: neutralize or eliminate the enemy LEADER. 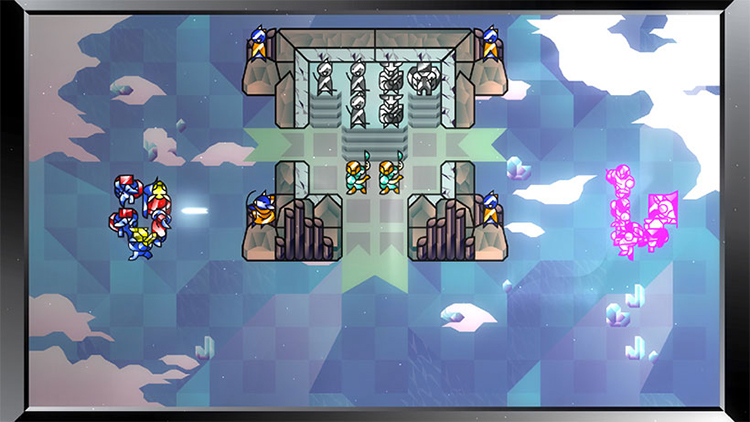 TUG OF SKY
The goal is to find and capture the enemy throne in his headquarters. You get closer to your objective each time you reach the other side of the arena. In this mode, fighting may not be the best way to win... 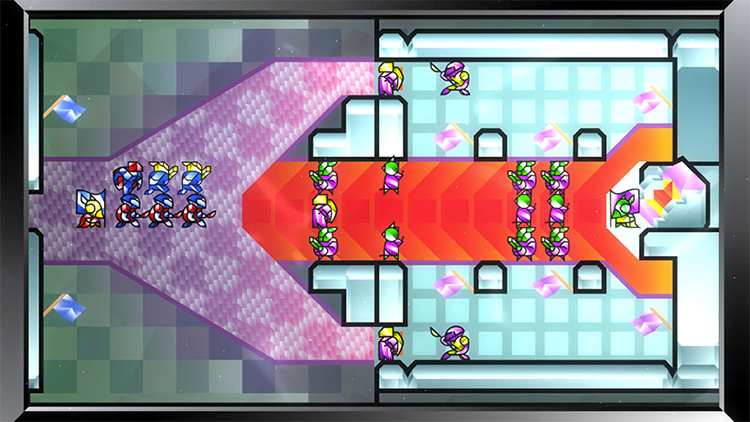 SNOKIA
This Mode is a tribute to the Nokia’s Snake. You are moving automatically and are not able to establish Formation and collisions are deadly. You begin with just the LEADER and neutral characters appears randomly on the battlefield. you can pick has many of them that you want, but if you grow too much be careful not to bite yourself!

I hope this presentation will encourage you to play LEADEN SKY BATTLE. You too, raise your flag and recruit soldiers for the battle!

Try out the game, support us on Steam Greenlight and share it!

Please don't hesitate to post some feedback on the forum. The game is still in development, we are working on new Games Modes and other features (coop?).

Any comments are welcome! Thank you and see you soon!

A beta version is available HERE!

To promote Leaden Sky Battle and grow its popularity (top games), use the embed code provided on your homepage, blog, forums and elsewhere you desire. Or try our widget.

Leaden Sky Battle is a 2 player versus game, a mix between Snake and Chess made with Unity.

Leaden Sky Battle is a 2 player versus game, a mix between Snake and Chess made with Unity.

A real time strategy game for PC and tablets in which you control a small band of figures by picking them up and placing them on the miniature battle...

Fiefdom is a town builder game centred around keeping your citizens happy, working, and taxed!

HORDE ATTACK - the game is in the genre of strategy in real time, where you have to travel through hostile lands to capture the city and destroy hordes...

Drohtin - Tales of an old Kingdom

Drohtin – Tales of an old Kingdom is a medieval real time strategy game. Building up a successful economy is the foundation of a thriving culture, advanced...