Explore the lost world of KAIRO. An strange bleak world filled with vast strange monuments. As you explore the depths within you must solve puzzles to bring ancient machinery back to life and give KAIRO a purpose once again. KAIRO is a first person atmospheric exploration and puzzle solving game.

Where in the world is Kairo?

So all last year I was telling everyone Kairo would be done by the end of 2011 no matter what. That didn't happen and I'm still not done. In fact I've been ominously quiet to the point where people seem to be finally asking, "where the hell is my damn game?". Just to get the main question out of the way, the game is still in full development and is getting very close to the end of development. I can't give you a solid release date but it will be as soon as I can possibly manage.

I don't think I'll be shocking anyone if I declare that finishing a game is hard. The bigger the game the harder that is and Kairo is the biggest project I've ever worked on. My original idea for the game was nowhere near as big and ambitious as it's become, but like most of my projects it's grown on its own in a very natural way. I feel like the game is very close to being what it was always meant to be, as vague as that may sound. I could certainly scale back the scope a little, trim pieces here and there and wrap it up sooner but I'm resisting that kind of drastic approach. I'm happy to remove excess and uninteresting content but I don't want to cut it short because it's the easier path.

Right now is a pretty tough period for me with the game. I keep telling both myself and everyone else it will be done soon yet there always seems to be more and more to get done. The daily development on the game largely feels like a real grind. I work on it anywhere from 5-7 days a week and typically work through late into the evenings. I don't say this for any kind of sympathy as my job and life are way more cushy than most people. Just want to emphasise that production hasn't stopped in my silence, I've just not felt like talking about it much.

I'm very grateful to every single person who's pre-ordered the game. Not so much because of the money, but because having people who've invested in the game has been the biggest motivator keeping me going. Left to my own devices it would probably have been very tempting to release Kairo as a smaller, lesser game and move onto something new and fresh. I feel like I owe you guys for the faith placed in me and don't want to disappoint. It's a lot to live up to and I guess I can't help but dread people might find Kairo a huge let down.

I hope people won't take this post as some kind of whining. I wouldn't trade this for anything, I spend my days living in comfort and working on something personal to me. I just figured I should be open and honest about where I am with the game and why it's taking time. I also hope this level of honesty might be of some help to those making their first games. There's a lot of amazing stuff coming out of the indie scene and at times it can look like everyone else produces great stuff with very little effort yet behind the scenes I think the vast majority find it just as much of a struggle.

So yeah… please bear with me.

A look back at the lessons learned from taking Kairo to various gaming events over the past few months.

Lessons from the coin-op

A look at the development involved in getting Kairo ready to be playable on the show floor.

Kairo on the move

Kairo is going to be on show at the Develop Showcase in Brighton, UK and at PAX Prime too!

This game is still in the Alpha section for some reason O.o

Seems like this game's on steam. I bought KAIRO and I'd be grateful to have a key to redeem it on steam.

I'd also very much appreciated a steam key if possible!

is it now possible to have a steam key?

i bought the game directly via your site /humble store. would it be possible to add desura keys to the humble page so i don´t loose the game on my HDD in some time. would be bad.

I would echo this. And it's not just downloading the game, it's also remembering I have it. A Desura key would be very welcome indeed. Thanks

is the linux and mac versions going to be on desura? also, could I get a desura key from buying it off the site (with the humble bundle)?

This is still in the Alpha section?

The game is out since some weekts. It's a bit sad that the Desura version is still not updated.

The release version was uploaded to Desura a few days after launch. Though I hadn't updated the description on here to indicate it. Sorry. 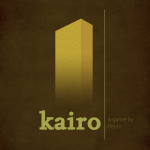