Build up your island into a supreme military base while planning out your crushing offensive. ICBM is a an island based multiplayer RTS. Fire missiles across the ocean while planning your land, sea, or air offense. Once nuclear ICBM's come into play, prepare for an all out war. Coming Late 2016.

Thanks for voting and helping ICBM on it's quest to become the 2022 Indie of the Year. You are now in with a chance to score some free games. Help this game secure more votes by embedding the widget (or link) we have included below on your favorite sites.

Other New First
I've decided to give the go ahead on my second project. It seems a bit crazy to work on two game projects at once, especially when I have a full-time job but I'm planning for big things. I was tossing around another idea at the beginning of the year for a small in scope 3rd person shooter project and I really want to have some people get started on that while I'm working on my RTS. I've budgeted $1600/month between 5 contractors (2 concept, 3 3D). I spent a lot of time finding people for this project, collecting reference images and writing down ideas. All of this stuff has taken a lot of time so my RTS game has been neglected for a while until about a week ago I was able to start picking it up. Even writing a few emails back and forth multiplied by 15 potential contractors took a ton of my time.

I remember years ago (like 10 years ago) trying to find members for an inexperienced indie team and I can say that 1.) The amount of talent looking for projects to work on is of much higher quality than ever before and 2.) There are people who want to work on the right team and are willing to take a lot less in pay to be on a team or build their portfolio. Getting your first job in games can be tough. My basic structure for now, to get my project rolling along at a slow pace is: I have 5 people that are mostly on the same deal: $10/hr + $20/hr in royalties each working 30-40 hours per month. At some point I myself, will be putting in 40 hours a week on that project when the time comes. Also, I'm excited with the talent I have found and they have been working out well so far.

ICBM
Again, pretty slow updates. So first, 10 years ago I had a year of c++ programming down and just started messing with openGL. I had a small RTS project then that I built over the summer. Here is some laughable history of where I came from.

ICBM then was being made as a real-time version of an old game called Metal Marines, which was a turned based strategy game. It involved sending mechs to other islands, but I have since stripped mechs out. The original prototype for my game looked something like this 2 years ago. I started prototyping with some simple models and what not.

The current state of the game looks something like this now. I got to adding in a PBR shader for some of my models and retexturing them in Substance Painter. (No MSAA or FXAA turned on). 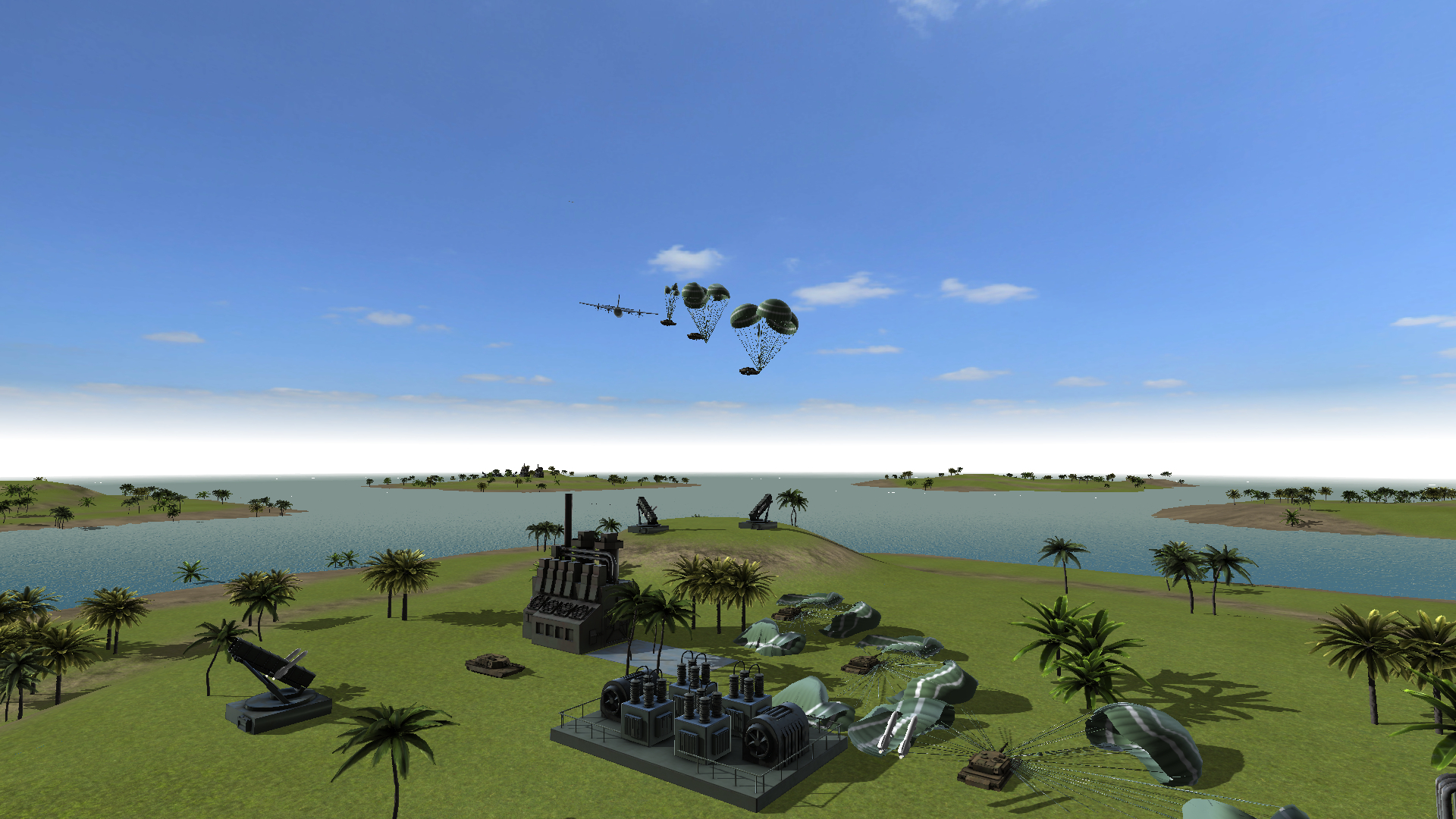 I've also added a projective decal for launching nukes and missiles at a given location. I also went and added some geometry to my trees. Before they were just 6 sided cylinders with basic normal maps (they were ugly).

Most Important Part of this Update: Mixamo
One of my artists who was working on a high poly sculpt mentioned he had tested putting the characted into mixamo and seeing how well it animated. I had come across mixamo or something like it in the past, but let me just tell you it is awesome. All you have to do is upload your character, place some bone areas and it will weight your entire mesh, fingers as well. There are a ton of animations to select that you can pack up and export. I bring those into Blender and have to manually copy each animation dope sheet to a main one, and it works since all the fbx skeletons have the same bone names. I'm really excited because of the amount of time that saves me in getting some results from a character that is right from being finished. Definitely worth looking at.

I spent 43 hours over the last 2 weeks and got in some new features including much better particles and C130 paradrop working.

I have a new video of the first prototype build of my game. It shows a little bit of graphics, AI, Effects.

I finished modeling a C130. This is not the final model to be shipped with, but I feel it is good enough to take to alpha.

Awesome looking game! how can i support you? :)