Hearts of Oak: Conquest of the Seas

Hearts of Oak: Conquest of the Seas is a non-commercial PC game being developed by PiratesAhoy!, and is to become the historical seafaring game to end them all! Fun, realistic gameplay on land and at sea, set during the Age of Sail, will provide extensive free play, exciting scripted storylines and intense multiplayer scenarios.

Hearts of Oak News for March and with a new Pre-Alpha Demo! This Demo has the distinction of being the first playable release to feature work from many different team members! Something we are all very excited about! 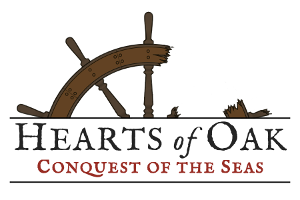 It's time for another Pre-alpha Demo release! This one happened a bit sooner than we expected, and there are a few issues with it, but our internal QA Team had so much fun playing with this one that we wanted to get it out to the general public as soon as possible! This Pre-Alpha Demo also has the distinction of being the first playable release to feature work from many different team members! Something we are all very excited about as well.

Here are JohnSilvers release notes for this build :

So, the original intention of the release was to focus entirely on integrating and even using @Foamy's combat system from Hunters Moon. Unfortunately, due to some technical issues with incorporating our assets I decided to create a completely new combat POC project that featured a simple combat system based in part on Foamy's work. What I developed for this release is essentially a simple combat system to finally showcase some sword play with the intent of integrating more of the Hunters Moon combat system in the future. I will also say that @Foamy project was and will be a major inspiration for what I envision a great combat system should be.

As well as the combat system, we also wanted to start and feature some other contributor assets.

@Purely Evil Seadog : has done a great job starting to create some great characters. Featured in the release is his Spanish Musketeer and Pirate. They are missing some texturing for now, but that will be corrected in the future.

@Foamy : for the donation of his Hunters Moon project and combat system.

@crispey : has a great job starting to create some excellent period furniture for HoO. His first contribution is the French table that holds the test sword.

On to the details of this release and some screen shots:

1. The character controller and camera follow controller has been completely redone. As well, I have added a new free roaming camera, which will allow you to get those great screen shots. Here is a run down of the new controls:

C - hold - allows the character to crouch and move

Spacebar - jump, this is a powerful jump and can allow your character to sometimes jump up walls

E - punches or swings the sword, the sword must be equipped

Q or ESC - exits the game

IJKL - moves the free camera when camera is active

Our character swinging a sword : 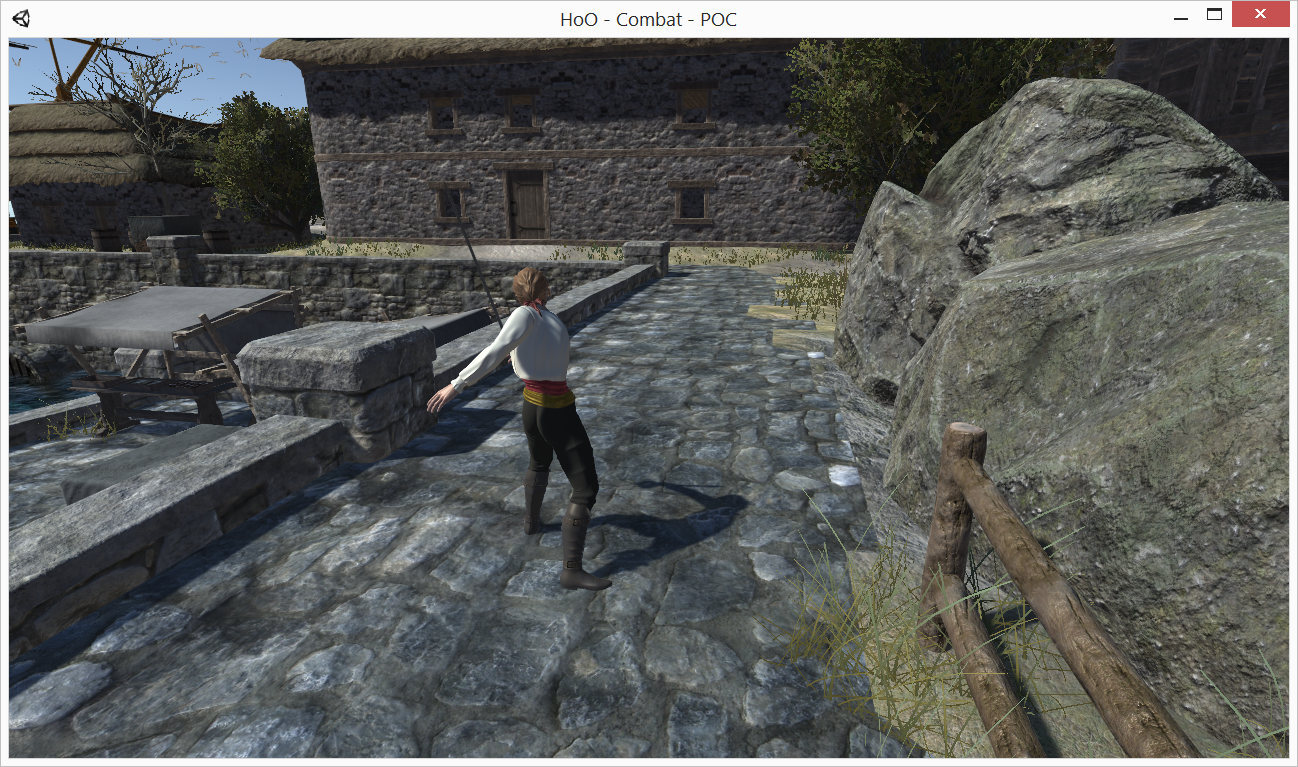 A free camera shot of the docks showing those new ships : 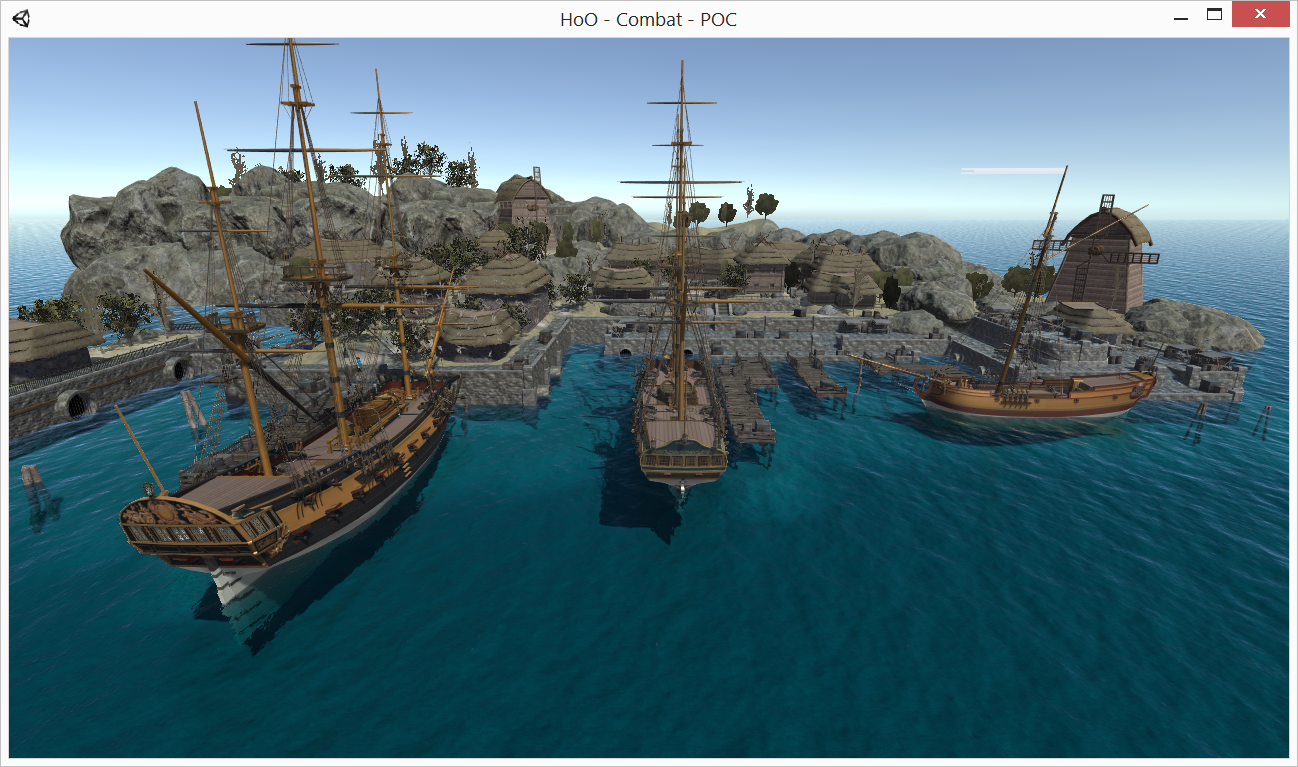 2. Character physics and ragdoll physics have been added using some great assets from RootMotion. These assets are also the core of Hunters Moon combat system and will further be extended to build a AAA combat system for HoO. 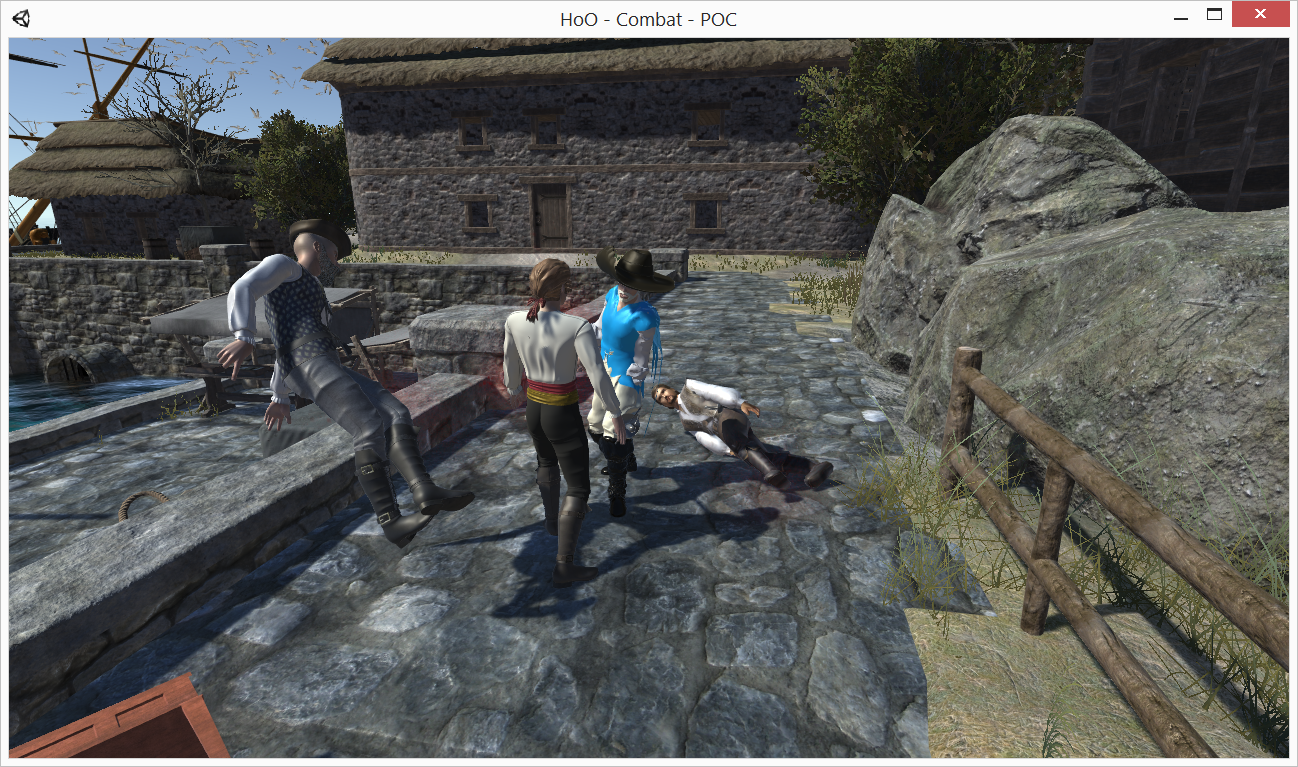 Here is an example of some blood being shed by our adventure. NOTE: the AI will not attach you yet, but they do die and later get resurrected.

3. NPC AI, this is the first time we have introduced character AI. Previously, a lot of time was spent getting gunnery AI and ship combat AI working well. For now the AI just follows the character around, regardless if they can see the character. The game uses the A* pathfinding project recast graph for movement, which works well for the most part but you may encounter the AI stuck in some places.

AI NPC following after the character. 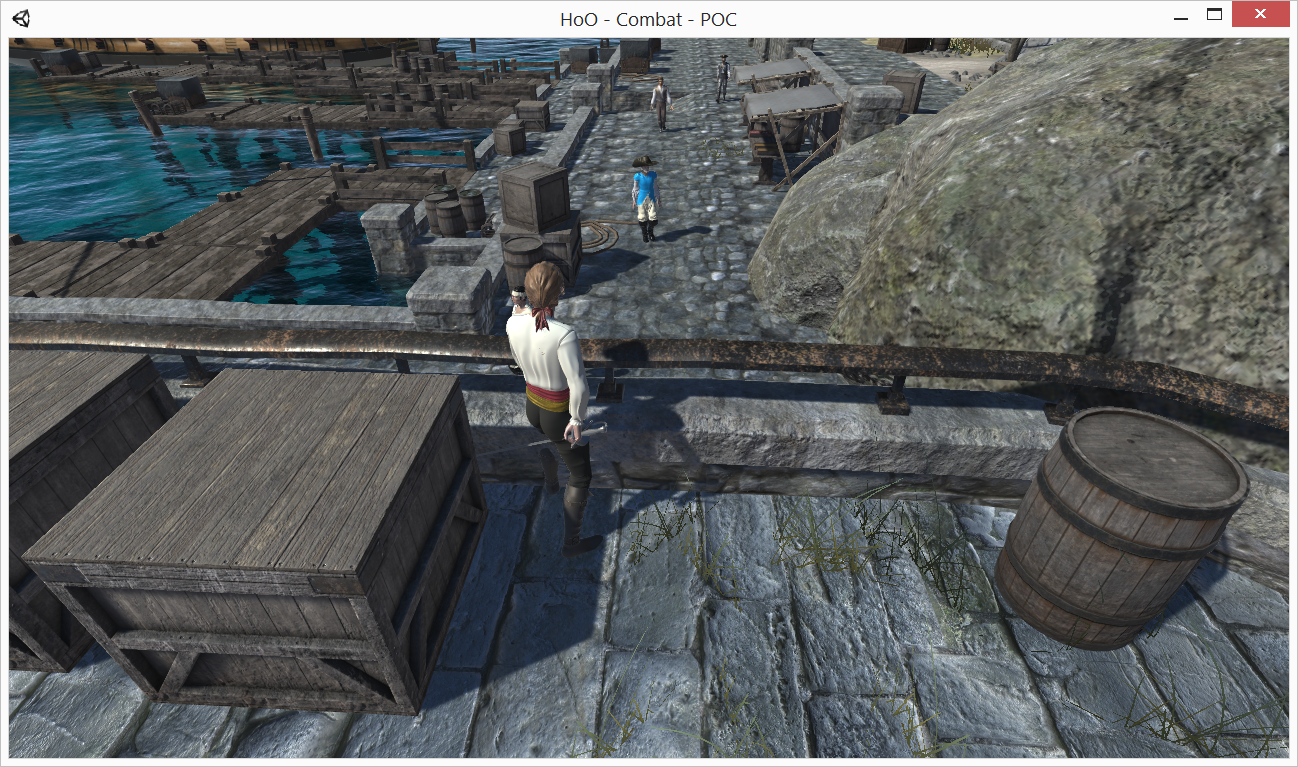 4. First introduction of character props and items. The character starts the level without a sword, I will leave it to the player to find the single sword. For now, the character will equip the sword and keep it in his hand for the rest of the game. Obviously, that will enhanced in future versions with an inventory system. 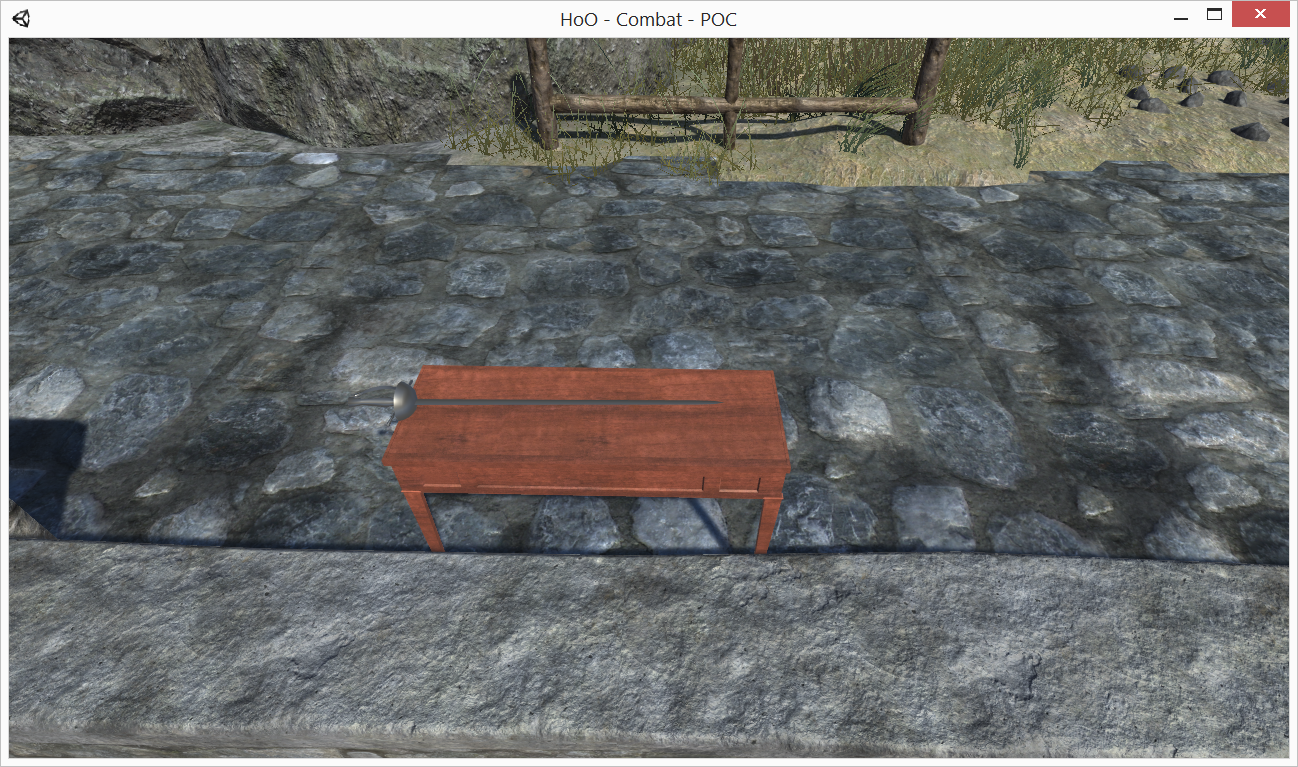 Sword on our new French table. Do you know where to get the sword?

5. Finally, after some thought and realization it was determined going forward to remove the networking components. Most of you may not realize, but HoO has been releases as a network capable software for almost a year now. The networking was implemented to support a collaborative platform but it has since been determined that is best suited to a separate tool called the Builder tool. Removing the networking also increased the games FPS much more than expected, which is good thing.

NOTE: this POC does not have a loading screen so the game may appear frozen when loading for up to a minute. Just be patient.

Our next HoO release will again focus on character combat and NPC AI with a focus on getting @Foamy's combat system from Hunters Moon working.

@JohnV and I are currently working on redefining the OpenWorld tiling schemes which will support 3 levels of terrain detail to support land movement (character), sea movement (ship) and map movement.

@Bleash is in the process of putting together a gunnery test range project which will allow us to test differences in game mechanics for everything related to ships/cannons gunnery. We have decided to release this project to the community in order to provide feedback on the game mechanics of gunnery and to show we still are focused on ship combat, behind the scenes. Here is a bit of an early preview : 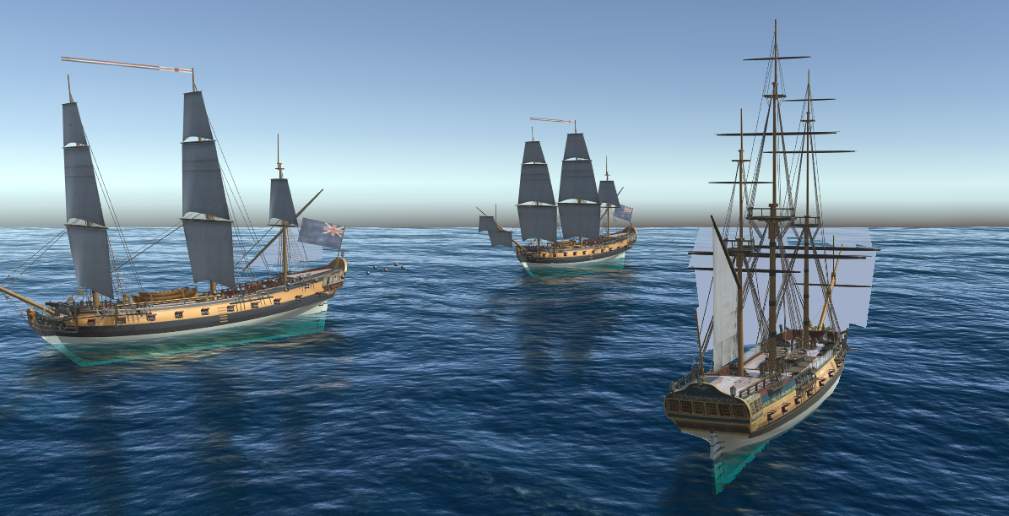 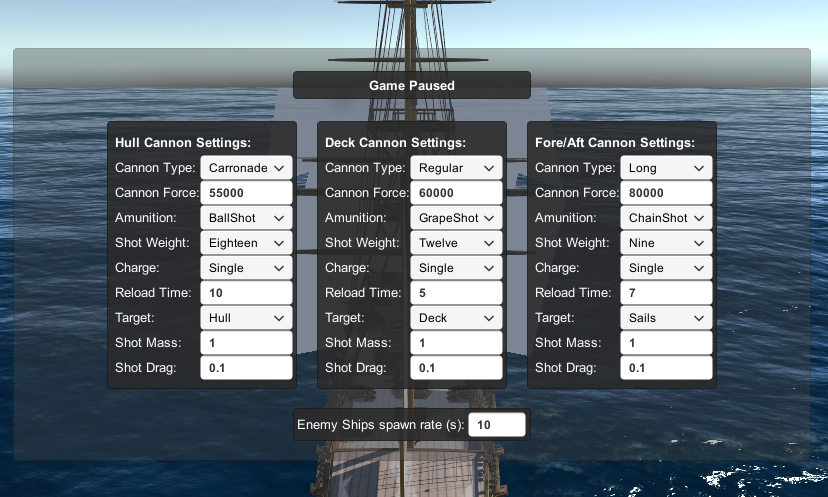 @Balda is currently working on enhancing details to the OpenWorld project and he has done a great job integrating water and storm effects. He is currently continuing with improving on the water shore line and some other rendering issues we have with the sun on terrain. His great contributions will be focused on our next OpenWorld release.

@RafaelCL has been at work on an exquisite 17th century Italian chiseled steel belt pistol, CA 1690. This model is simply gorgeous, and hopefully soon will be in a playable demo too! Here is a couple of leaked screen shots of this gorgeous firearm! 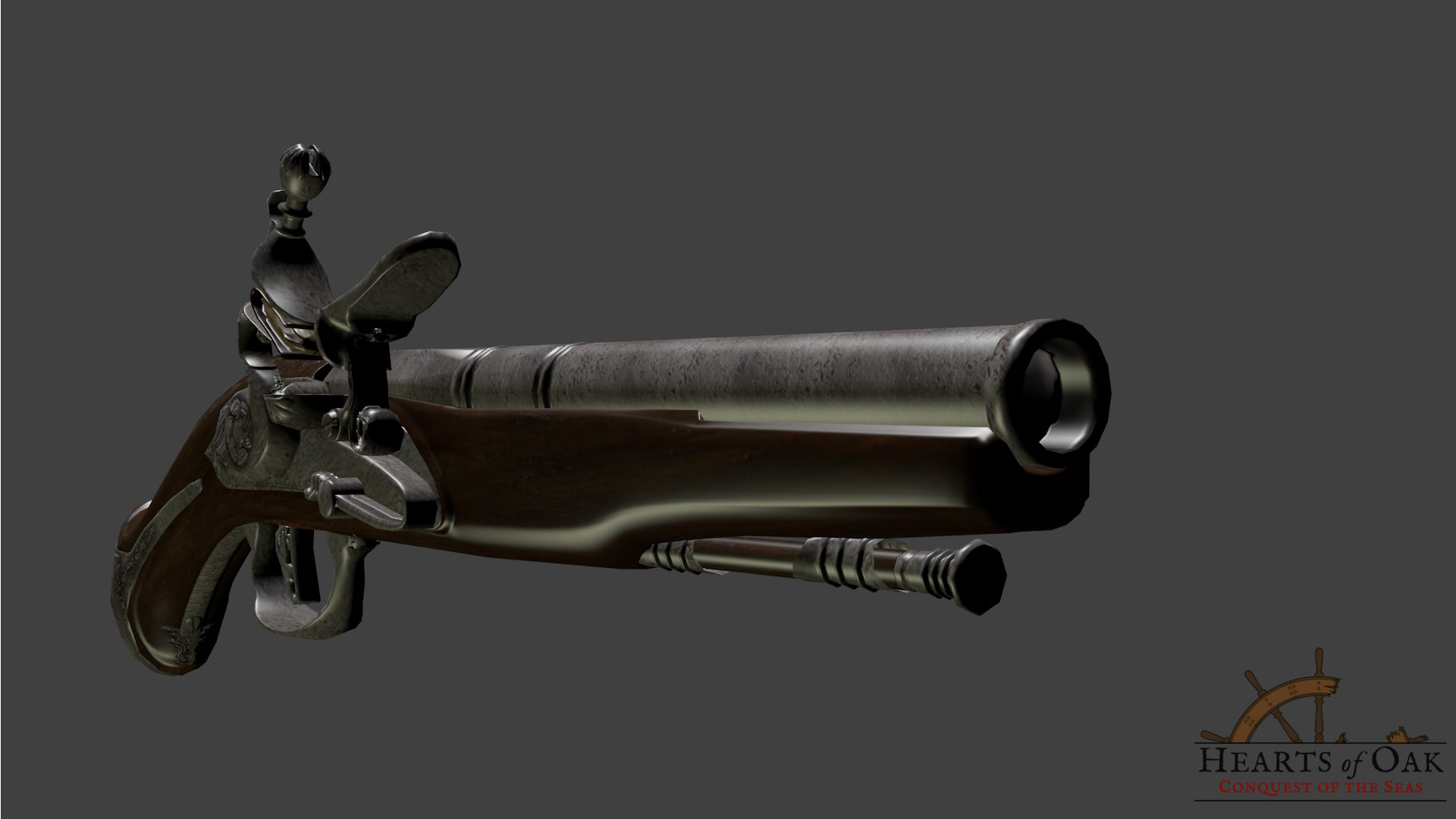 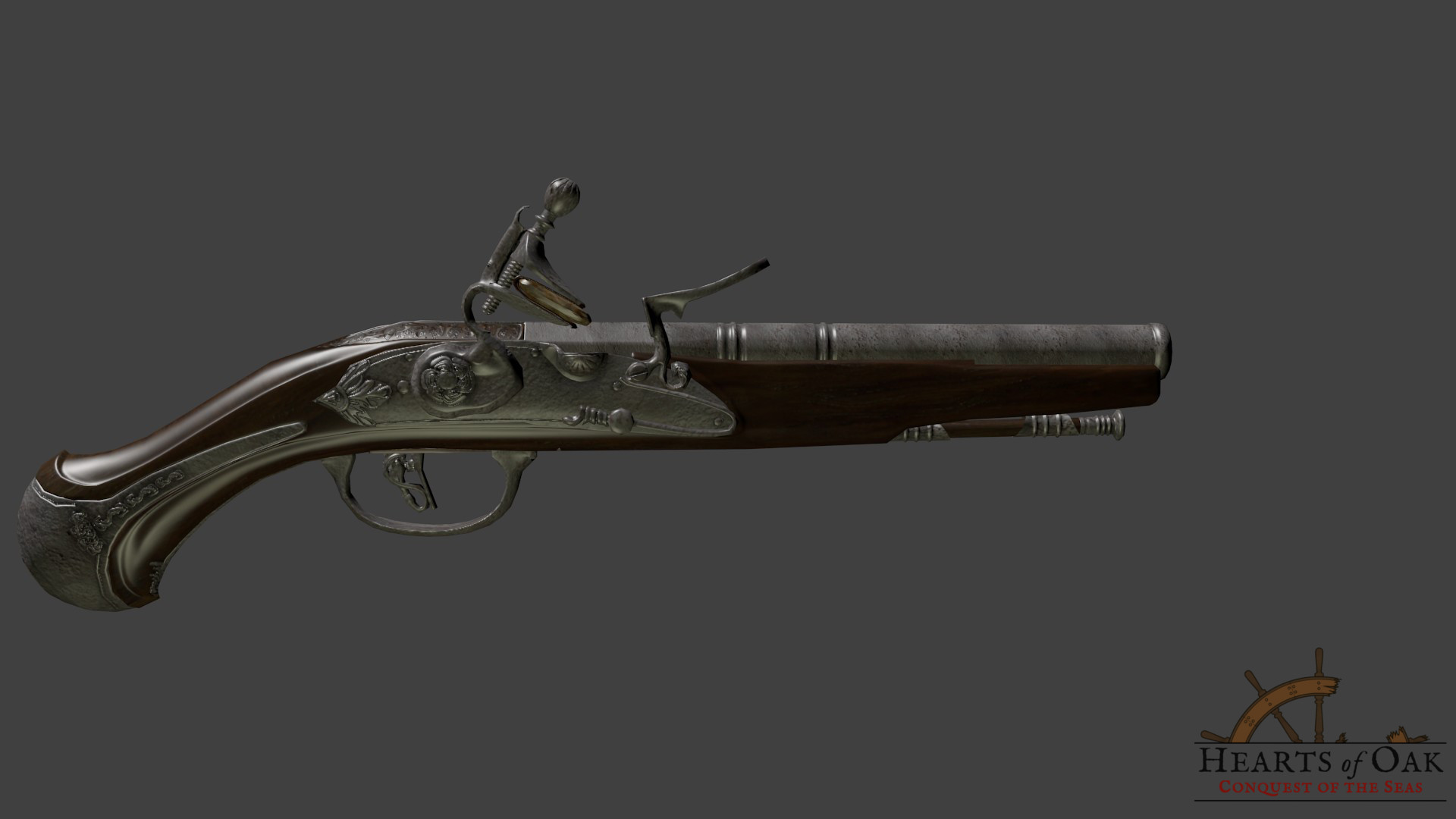 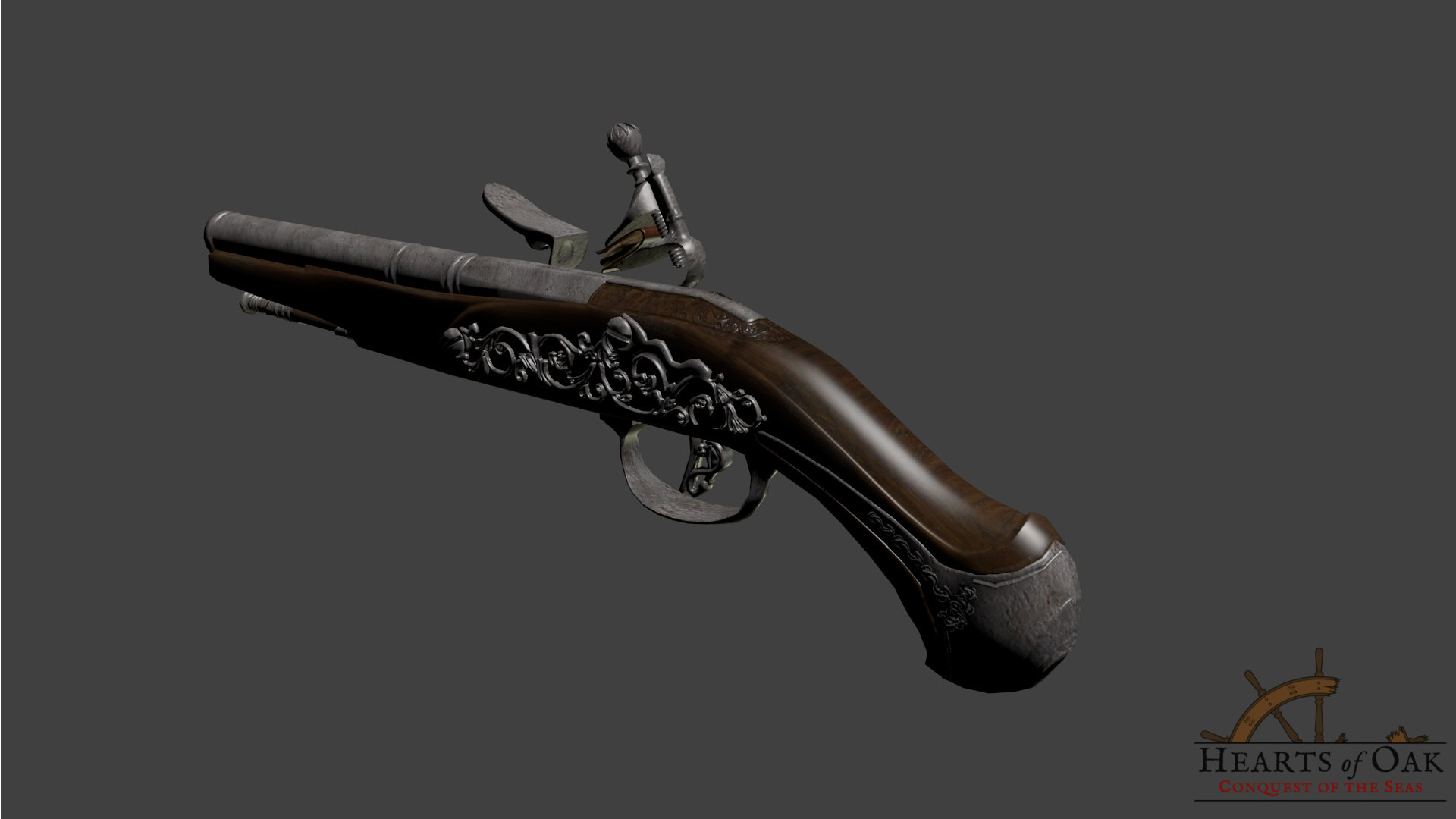 As much as I have not been able to spend 100% of my time on development of this release I am quite excited about how so many things are starting to come together and the contributions keep coming in.

Please enjoy this release and I certainly look forward to all your comments or questions.

As always, I would also like to thank the QA team for jumping on top of every release and doing a thorough job of testing each element. This testing has certainly helped guide the development and I really appreciate all your efforts.

That is about it for this release, as always, you can download the demo from our Downloads section.

How You Can Help?
As always, we are looking for volunteers to help us with Hearts of Oak! We always need programmers and 3D artists, but we need people with other important skills as well. If you would like to give us a hand, please feel free to have a look at Armada's post over on our IndieDB page! It has quite a bit more information on how you can help us out!

I am anticipating the next test build :)

Very awesome update! I was just checking back here last night and wake up this morning and here it is!

Oh wow! Looking really good, keep up the good work. I love how the pistol is looking.

Absolutely an amazing work and I just love the new pistol design, can't wait for the next demo release and keep up the good work!

Is this game dead? No updates for a very long time. Any News of any kind?

Sad there are no updates, I'm afraid this is dead (hope not) :(

Hi all, sorry for the lack of updates! The project isn't actually dead, but our lead programmer was unable to continue for personal reasons, so progress has partially halted for now. We are still developing assets for the game and may post an update showing some images soon. We have some ideas for how we can make progress again, and we'll share the details as soon as we can.

Glad to read this!