The year is 2114 and the great war has continued for two hundred years. Shotguns and trench warfare blend with laser rifles and armored mechs as the great powers continue their endless fight over war-torn Europe. Gratuitous Tank Battles is the sequel to indie space strategy game 'Gratuitous Space Battles'. GTB is an RTS/simulation/tower defense hybrid. The player can be the attacker or the stationary defender in a series of large scale real-time battles. Rather than selecting pre-built units like most Tower Defense games, GTB lets the player customise both the composition, and visuals of their units. An integrated map editor and online challenge system ensures a never ending series of battles to fight and enemies to crush. Real-time target and path orders can be given to your units, and the battles include night-time and night vision modes.

Gratuitous Tank Battl;es has had a patch to version 1.012, here are a few of the major changes: 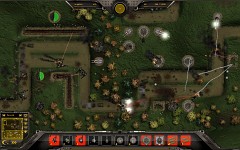 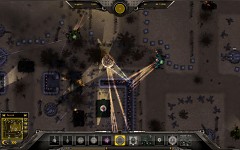 A new patch for Gratuitous Tank Battles (version 1.009) has now been released.

The latest, and possibly the final pre-release patch for the beta version of Gratuitous Tank Battles has been released.

A new patch has been released to update beta copies of gratuitous tank battles to 1.006

Gratuitous tank battles does not require a complex SDK or development tools to mod like many other games. Quite a few alterations can be made to the game...

Welcome Officer and congratulations on successfully completing the rigorous abridged commissioning course! This is a glorious day, your aim as you join...

Well, loved GSB... then you put giant robots in the mix. No real way ill be turning this down, by the look of things...

This looks awesome! It's like GSB... except... except with MECHS! And that means it is automatically the best game ever made. Erm. Ever WILL be made.

discovered your blog through a friend. This project looks cool, I'll track.