Golden Freedom is a hacking simulator. It aims to give you the thrill of hacking while being fun, safe and perfectly legal. The aim of the game is to hack into servers and complete missions for certain employers, changing the world and your employer’s fortunes while you’re at it.

The year is 2176. After a huge technological boom, massive companies and governments alike were developing newer and more powerful technologies daily. A network was set up, much like the internet of today but vastly more powerful and automatically networked to everything. Unfortunately, this new network was built so quickly that the designers didn’t have time to put backup systems and fail-safes in place, and after a while they were seen as irrelevant anyway as there hadn’t been a serious network attack in many years. As always, after a rise comes a fall. The network went down, causing all the new technology to break irreparably. The world was plunged into a great depression, but with all the data surrounding the technology lost, few wars were fought.

Stability was found in the form of new governments. Each country started to rebuild some of their old technology, starting a technological arms race between governments and multinational companies in a bid to own the rights to these rebuilt models. With the competition so fierce, both sides eventually resorted to less peaceful methods, leading to the destruction of an old oil rig by British government in which a group of elite scientists were working on rebuilding some of the very powerful technology; the technology was lost during the explosion. It was rumoured that this technology was not only powerful on the network, but also had the capability to be edited for any purpose. A short while after this technology went missing the government and corporations publicly announced that they would no longer be trying to develop this type of thing, however there has been no evidence of the research stopping.

You have found an old terminal with which you can access a repaired part of the network. With some software you have acquired from an old hard drive, this is your key to this new phase of history. How will it end? That will be up to you.The game is written in C++ and will be open-source, allowing people to look at, learn from and change the source code. See the readme for more information.

The game is written in C++ and will be open-source, allowing people to look at, learn from and change the source code. See the readme for more information.

Thanks for voting and helping Golden Freedom on it's quest to become the 2022 Indie of the Year. You are now in with a chance to score some free games. Help this game secure more votes by embedding the widget (or link) we have included below on your favorite sites.

Golden Freedom 0.4 has been released. This is a first release containing core gameplay features but none of the story elements have been included yet. This means there is no storyline as yet and only three available files are related to the story. This version has been released to give people a taste for what is to come.

Well this is it, my first game release!

You can download it from here at moddb, FilePlanet or FileFront 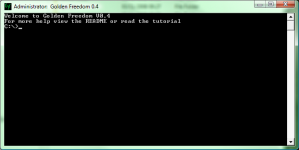 it all started back in February, I was on a walk and had the idea of creating a hacking simulator, I also felt that I needed to practice and extend my limited knowledge of C++ and so I started development. Since then I have written a 0.2 release that I was originally going to release to the public but then decided that it wasn't good enough even for a what is to come demo. I then rewrote the entire code refining it and making it easier to read. Then over the past few months I have implemented a whole host of new features and have finally come to the conclusion: Golden Freedom 0.4 is ready! 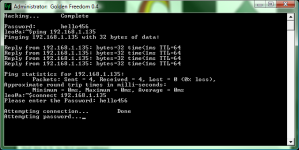 While 0.4 is done I still have huge dreams for future releases, with features that I am only just beginning to understand how to write. It may take some time but I can say that this will not be the final release, in fact I will be branching the code tomorrow to start development on version 0.6. I aim to add an email system so that the user can be given instructions and that will be the start of storyline implementation.

I hope that you will try this game out and see the potential in it, please feel free to comment either here or on our forums.

This is the 0.4 release of Golden Freedom. Please see the Readme for more information and feel free to comment. While this is a complete release there...

Considering that your concept art looks like this is done in paint, makes me a bit worried.