A Generationship sets off to settle humanity on a new planet.

We are on Steam. Wishlist NOW.

You're the AI responsible for a generation ship, mankind's last hope for survival. Build efficient raw material cycles and help your crew in a realistic real-time simulation to survive the hardness of space on their long journey to a new home!

Please leave also some feedback and join our community on

A solo developer, working on that game since start of 2020 at fulltime.

The main change this time is a larger change on the rooms. They are now not activity oriented anymore, to make it easier to build them up. Instead the interior items are the main thing in rooms now. Each of them have their own activity and that leads to larger changes also in the UI and interactions. Due to that large changes i couldn't add so many new needs as i wanted. Instead just the hygiene and a med bay has been added for the persons.

The main change this iteration is a new approach for the activities. Instead of having the activities to be choosen in a building, now each interior item can be dropped to add an activity. Each one has its own to make it easier to understand.

To make it easier to find interiors, i combined some of the rooms. Before the rooms than would have had too many activities to choose, but now its way cleaner to do so. When opening the configuration, there will be a interior item build menu, where all possible interior item are grouped in categories. When an interior item is dropped the needed storage will appear in the first "storage" category. Later i plan to let also other storage droppable in that category. 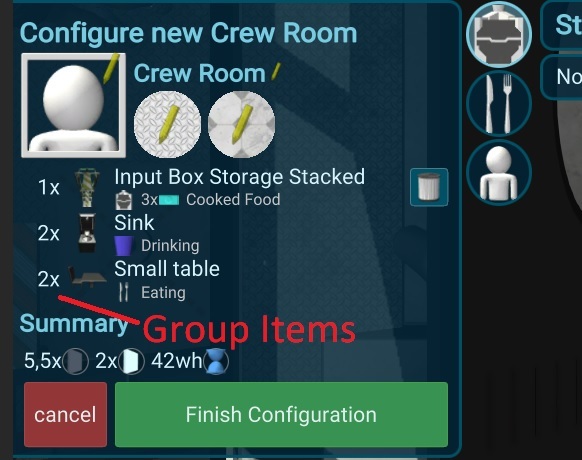 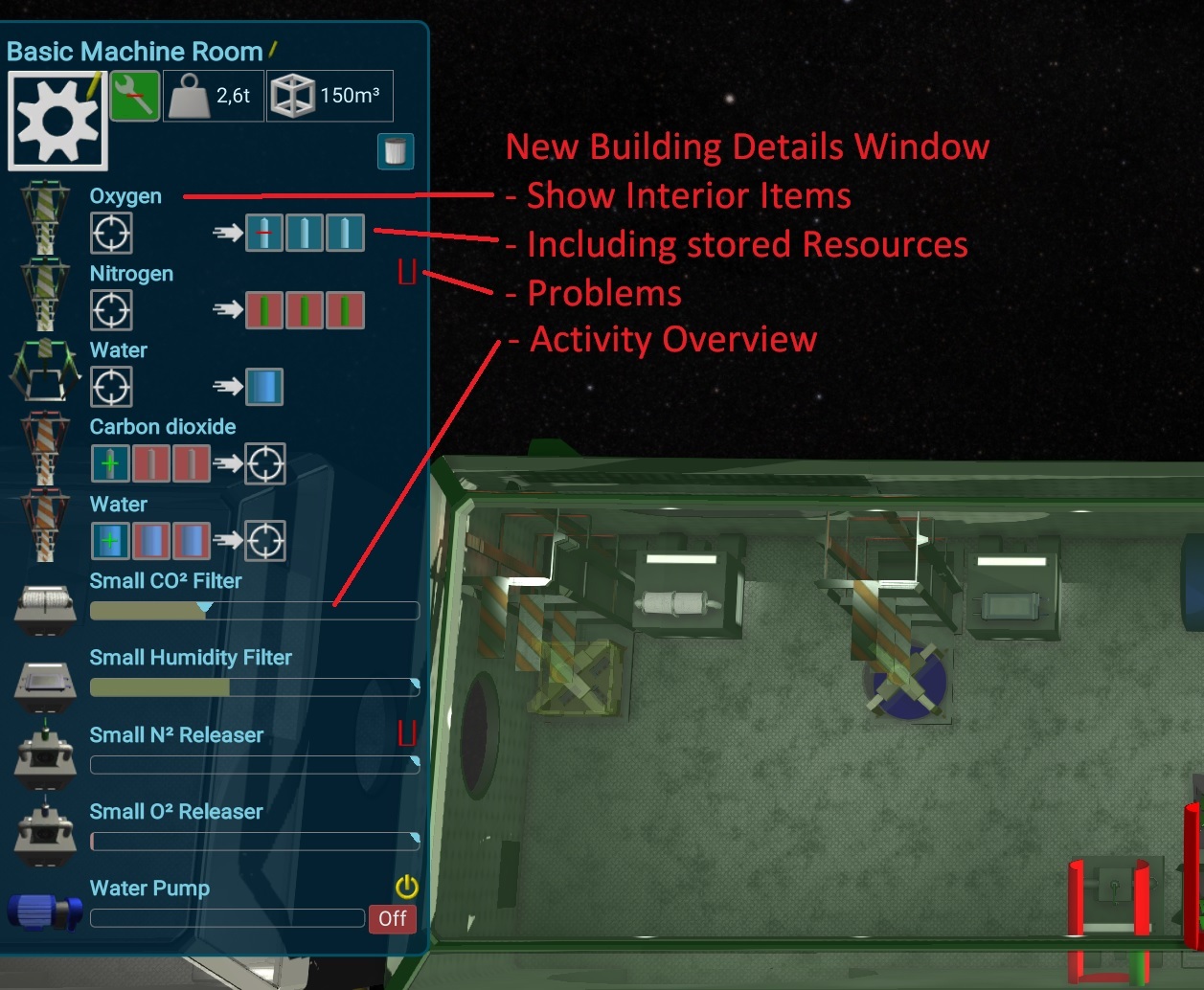 The change to have all interiors possible in one room made the Icon obsolete. To make this still useful, the player can change the icon to some preconfigured icons.

Due to the new Gameplay with exactly one activity on one interior item, its now possible to move the problem icons directly above the interior items. Also problem markers for storage have been added to hint better to potential problems.

The choosing of the activity of a person also needed to be adjusted. The Player can now directly choose the interior of the activity to send him to this. Only possible, not blocked ones are shown. While updating that, i also fixed some performance issues with that topic, leading on some point to lower fps. 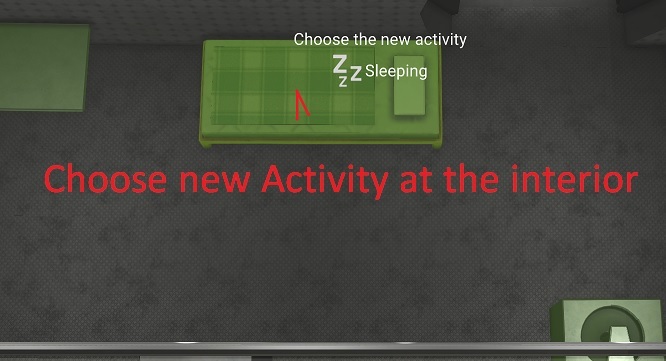 With the new systems it become not useful anymore to assign a person to an activity whats not a single machine. This part has been changed a lot in this iteration, so now the persons can search ship wide for works to do. Its possible to filter these tasks for each individual person by assigning a workplace. This is now a building, and you can assign as many as you want. The person will than just work in this building. In later iterations its planned to add more filters, like activity type specific, so you can let him only grow plants or maintain the buildings. Maybe also to assign a daytime range when he should work, to have kind of shifts in the game. 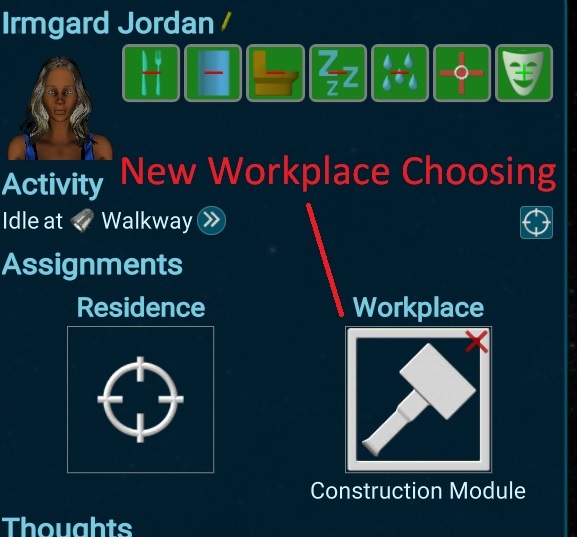 The Construction and Maintenance activity can now work paralel on the same item. This was neccessary, due to its no more possible to build one big construction activity, but having many small ones instead. I added a "Effort" unit mesassured in wh (working hours) and used the usual container logic to represent the build. Each worker now just adds deltas as all other systems and use events from the building instead of precalculated times.

Big thanks to BlueSky-wr to design the medical bed. Its directly added to the only interior item for a new room (more will be added later). The healing is a new kind of activity, what needed a small change in the simulation, so customers can also go there, even if there is no worker attached.

The person now also needs hygiene. To add a washing activity without gravity, astronauts using simple washcloth. So i used the sink to show that in an easy way. The Drink activity now uses a new water dispenser instead. 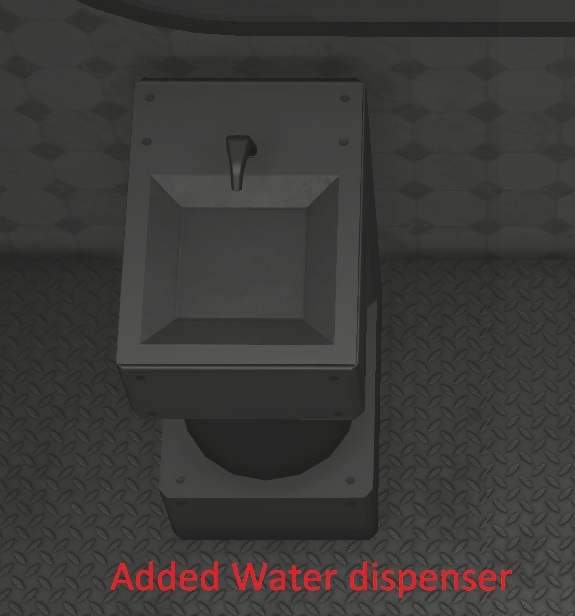 To add the new Wash activity to increase the hygiene, it was needed to add content of the resources. Brown water contains nutrition, that can be filtered by the purification plant. Till now, this amount was fixed, due to it was just created by the toilet. The wash activity now should also create brown water, but with way less biomass inside. To make this work a quality has been added. In case of brown water, higher quality means more biomass contained. Later this can be also used for food quality or harvested iron ore. 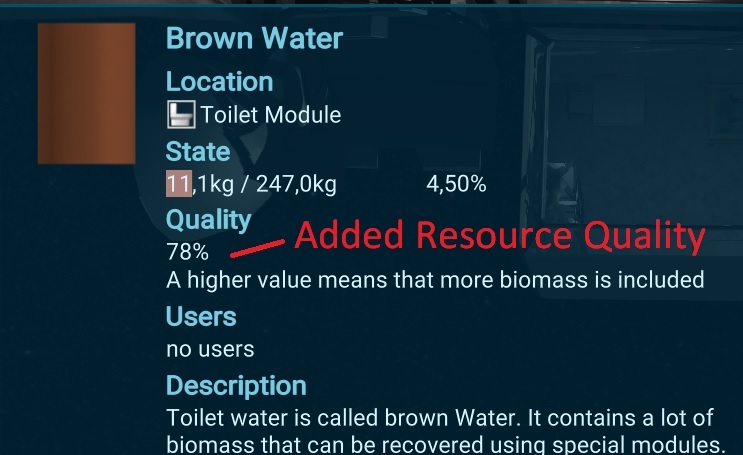