Fortix is a new version of the 80’s popular arcade game Qix. The game is set in a beautiful fantasy setting and boosted with brand new strategic elements. The aim is still to conquer the playfield by cutting out parts of it and the monsters are still there to make your life harder, but there are new enemies you have to think of. There is a castle on each playfield with towers at their corners. Those towers immediately start shooting at you if you set out to conquer part of the land. There are two ways to win: either by conquering 90% of the land or by conquering the castle. In order to deal with the towers you can use catapults. If you can gain control over the catapults, they will shoot out the towers and you may claim the castle. Additional feature to the old arcade version are the powerups. They help you with invulnerability or speed to gain advantage over the monsters which will become more and more vicious after each level.

Fortix is a cross between the old fence off to conquer and nowadays popular puzzle games (spiced up with some turret defense). Yes it is pretty hard to explain but once you try it, it is in fact quite simple. And addictive, very addictive! Players control Knight Fortix on his epic journey against the minions of the evil mage Xitrof. He has to fight his way across the shires of island Artalom storming from castle to castle to eventually fight the mage himself. Players need to use cunning strategy to succeed against the maze/puzzle like levels infested by all kinds of monsters and defensive turrets. The aim in the game is to conquer (corner off) parts of the playfield thus extending the base line more and more towards the middle where eventually the players have to fence off Xitrof’s dark badges, to win the level.

We've released the original, at the crazy low price of:

But for the true experience, get the just out Fortix 2: 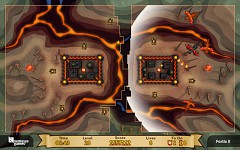 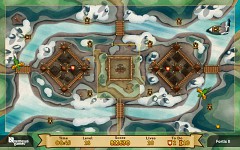 Enjoy Fortix 2, Fortix and many other great games on Desura.

Fortix is the first game available for less than a dollar on Steam.

How to quickly complete levels?

A tutorial on how to quickly complete Fortix levels.

Try out classic Fortix's first three levels in this demo. If you haven't tried it already, come relive the first Fortix! The demo is great, but it is...

Best game for under a dollar, EVER! Buy this damn you.

This Game works Great under Linux with Wine 1.3.22.

I would probably get this, but I need it in a Linux version.

Already finished the whole game. ;-) Needs an additional campaign... and it's definitely worth more than just 0,69€!