Do you have a dream? Because Hearts sure has one and that is to soar towards the endless skies! Help her evade the dangerous green spikes while she does so! Simply tap to evade!

Want to let your family and friends get a good laugh out of it too? Tap to share your game replays when it is game over! 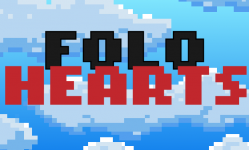 After a few weeks of crafting, Folo Hearts is finally live on both the iOS App Store and Google Play Store! This means that you can finally share your Folo Hearts game replays with your friends and family!

To do so, simply tap on the "Share" button when it is game over for you.

Ready to do so? Now grab the game free from the iOS App Store from:

and if you are on Android, you can grab it from the Google Play Store from:

Remember to have fun and share the game among your friends and family!

It has only been less than a month but Folo Hearts is ready to be released into the wild! Read on for the game's release date!

Which game does not have a hero? Better yet, Folo Hearts now has its own heroine! Welcome Hearts!

It has only been a day since I have started crafting Folo Hearts but here are the things that have happened so far!