Munch Face is an arcade mashup inspired by such games as Pac-Man, Portal, Space Invaders and more. You can create your own levels and share them with our built in level editor.

For such a simple and addictive game, seems like a long journey to get to launch! Munch Face has officially launched on Ouya, someone actually paid to unlock the Challenge Mode, so we made some money! I can finally upgrade from ramen to... 2 packs of ramen! 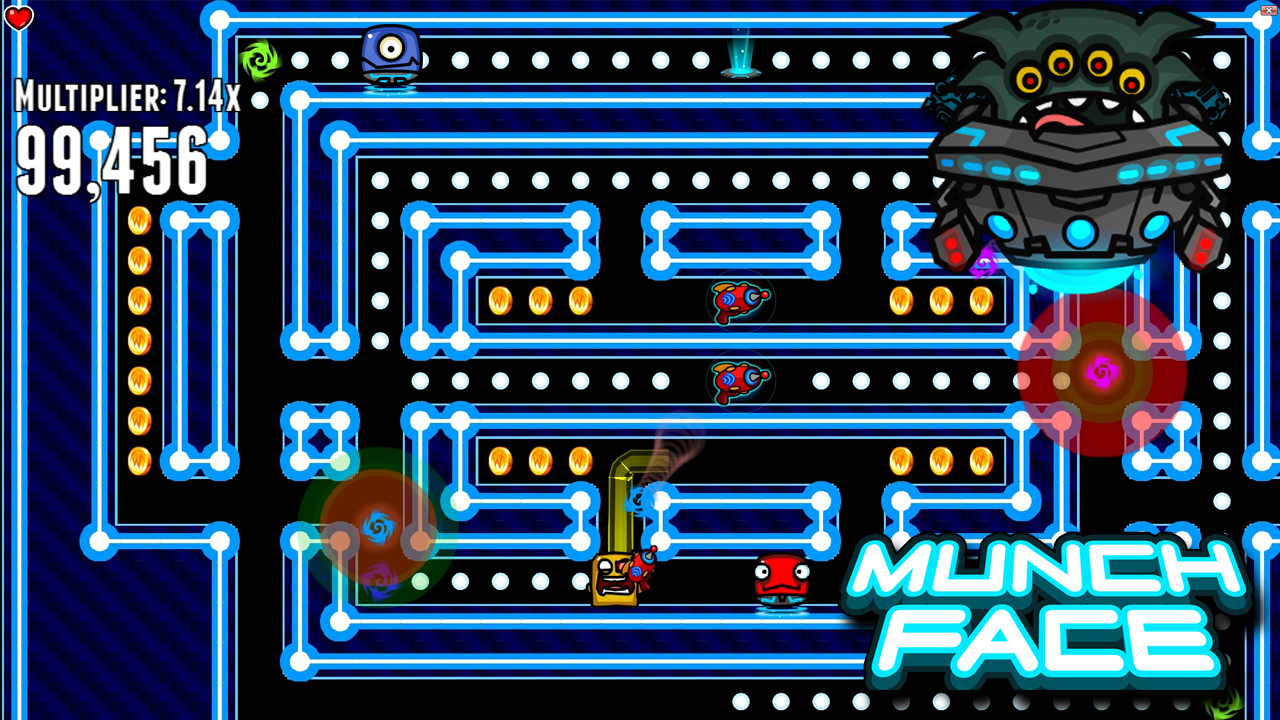 When we started working on the game earlier in the year, we got the game mechanic locked down within two weeks. And it was fun. But to make a game today, you have to include lots of content, several gameplay hooks, design interfaces, leaderboards, an upgrade shop, etc. All these things that support the core gameplay are now the minimum bar that's needed to have a game that is worthy of gamer's attention. And all that stuff took us an extra 3 months to get done.

So what you now have is an Ouya version that comes complete with 2 gameplay modes. The Arcade Mode is free, and you can play as much as you want. If you are feeling up for it, you can buy the Challenge Mode and unlock 100 more levels to conquer, featuring more new weapons to use. Here's the full list of features so far:

So this is just the start. Whether we add more levels, or gameplay mechanics, or even launch on other platforms is based on whether you love what we created so far. We hope you do. Because it'll be fun to see what crazy new thing we add. And I'm hoping it is CRAZY.

Here are some new screenshots for you to enjoy. But seriously, the game is even more fun when you actually play it instead of staring at static images. 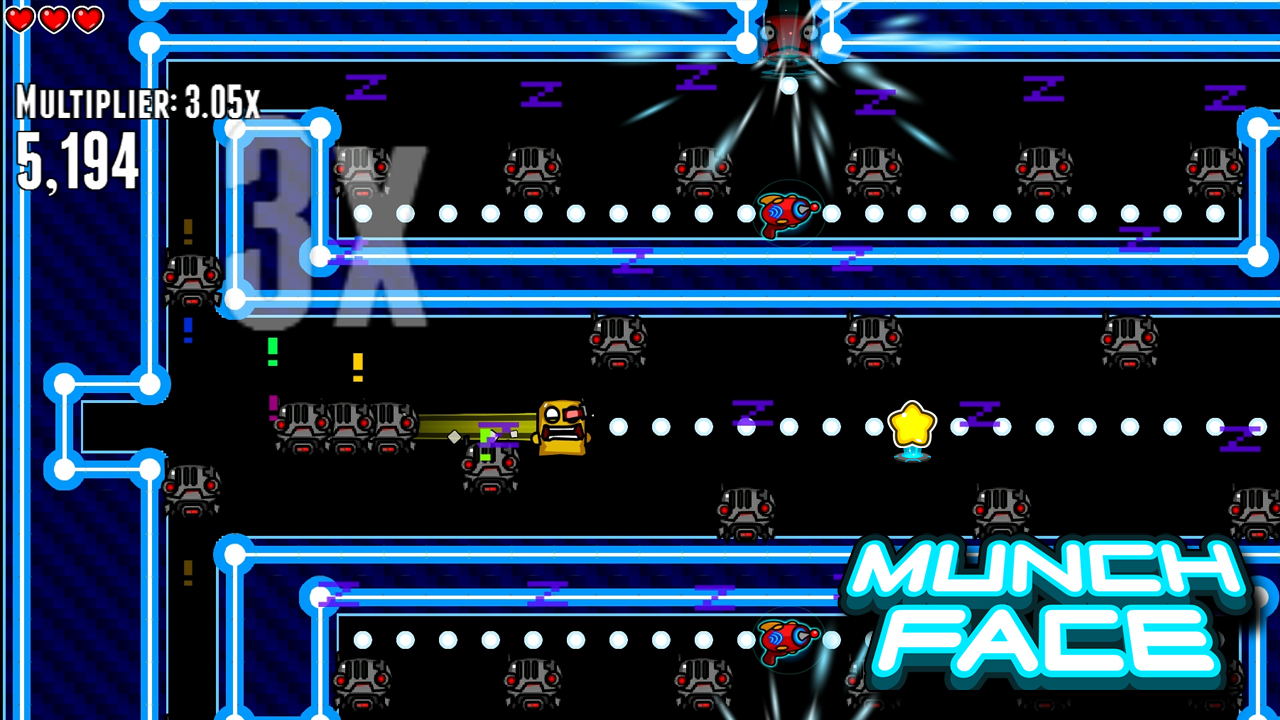 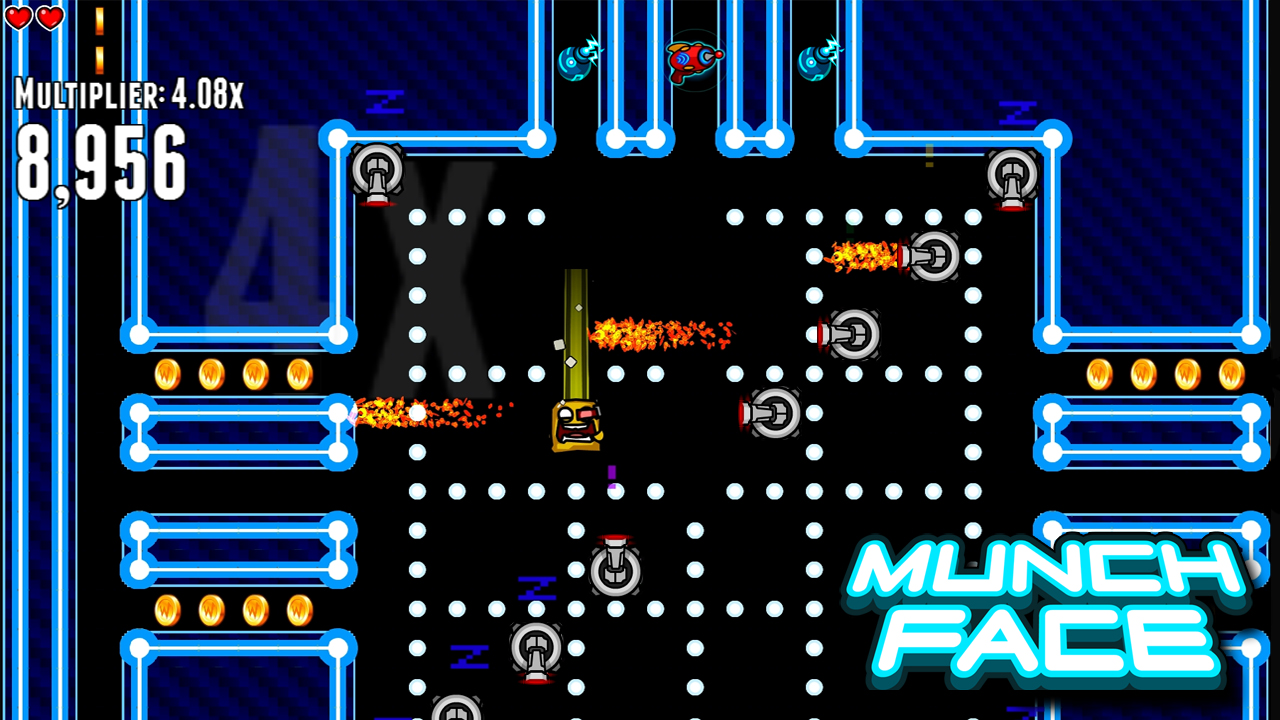 A version of Munch Face will be coming to Ouya. Here's details of what we have in store.

The Evolution of Munch Face

Wicked Loot share with you how Munch Face has evolved since initial conception, and where it's going.

Munch Face is now in early alpha and it's playable! Conquer 20 levels while surviving monsters, traps, and alarm bots in this demo.

1.Are you going to have a downloadable version of the game where you can acsdeass the editor and other content without having to resigned and without hav eing to have to doweload updates(ity will be gratefull to alout of players if you do have a offline dowloadble version)?

2.How will the worlds differ from each other?

3.If you make a I pad version will the editor hbe avaible on all versions pr is it just the pc version?

4.Will it be free or will you have to pay?

5.Will you be on stem greenlight?

thanks your game is awesome il be waitching carefully!!