False Legends is a fresh take on fantasy role-playing games. It has action and adventure with it's subtle mix of strategy and depth. With a focus on both old-school story driven gameplay and modern competitive multiplayer matches, there is something for every gamer.

False Legends is currently in pre-alpha stages of production. You can have an impact on how the game is being developed by commenting and suggesting features. I'm always keen to hear feedback and ideas on how to make this game pure awesome.

The game is currently being developed by one person, me. This is quite a large undertaking so all community support is appreciated. If you want to know more about the game, you can visit my website.

Single Player
The gameplay for the single player levels will be based around gaining and improving your party of followers. You will be able to train and upgrade up to 8 characters in your party. Your followers will go from level to level and fight with you to the death. This will have a huge impact on the way levels are designed and add a level of strategy to your quests.

Multi-player
Party based play won’t only be on single player, the multiplayer will feature you controlling building bases and gaining followers. Also, up to 7 of your friends will be able to join the skirmishes leading to some interesting battles. The objective in multiplayer games will be to destroy the enemy team's temple which acts as a home base. 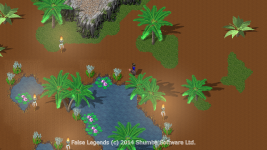 During the last two weeks I've been busy adding a new lighting system into False Legends, building the new desert environment, and working on the spell casting system. Each character class will be able to cast spells, although only the Mage class will be able to unlock the more deadly enchantments. Spells will range from simple health remedies all the way to deadly lightening strikes. Each spell the player learns can be upgraded to increase it's strength or usefulness. 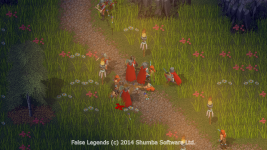 The cool lightening system adds a bit more depth to the graphics and the desert climate will test your skills as you battle through dust storms and survive with minimum resources. I'm really glad how things are turning out and each day False Legends is getting a little closer to being finished.

A new video showing off some of False Legends gameplay has been released. Please take a look and let me know what you think. Enjoy watching!

sweet reminds me of a better version of faldon. :D

Thanks :) It won't be a MMO though, but rather more focused on single player quests and up to 8 player multiplayer matches.