Orphan Evy wakes to find herself in a fairytale kingdom under threat from an evil witch. Beyond the witch, monstrous creatures roam the land, from werewolves and evil rabbits to goblins and much, much worse. With the help of new friends and the magic of her special spheres, Evy has to save the land. In puzzle duels, she must match 3+ spheres in endlessly-shifting puzzle chains to unlock her powers and defeat the creatures. The land itself is beautifully-illustrated, with magnificent painted landscapes and charismatic enemies. As Evy travels through it, a thrilling plot unfurls, taking Evy from one end of the landscape to the other and, ultimately, to the witch’s own hut. Beautiful and gripping, Evy’s world has to be seen to be believed.

Evy: Magic Spheres is coming to Desura on October 28th. Standalone and client versions are already available for pre-order! 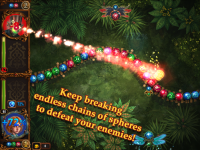 Help a little girl to save the fairy tale land from evil. Orphan Evy wakes to find herself in a magic kingdom under threat from an evil witch. Besides the witch, monstrous creatures roam the land, from werewolves and evil rabbits to goblins and much, much worse.In puzzle duels, Evy must match 3+ spheres in endlessly-shifting puzzle chains to unlock her powers and defeat the monsters.

Hello my fellow Desuarinos welcome to the first of our weekly video highlighting the fantastic fresh indie themed adventures you will be able to find...

First game I've played from Desura (actually got it because of this game) so I'm not sure if I just don't know what I'm doing or if there's somewhere else I should be posting this instead. But anyway, after playing most of the game over the course of a couple of days I went to keep playing and my progress was completely gone. Only option available was to create a new profile. Really have no idea what happened or if there's any way to fix it.

Hi,
Apologies for the late reply. If the problem is still there, please contact us at support@herocraft.com and we'll try to help you.

wow actually. After playing the demo its pretty good. I love the first stage with the wolf although the tool tips do get in the way a bit. After clicking ok the paddle moves and I lose my position to catch the coin

pretty clever idea. Zuma with 2 players. make the players n balls smaller so it gives more room to move and add online drop in and you got ur self a winner!

Thanks for the feedback, we'll take this into account!

Seems exactly like Zuma. But who am I ta judge, right?

Feel free to try the demo version. It may seem exactly like Zuma at first sight, but it also involves quite a bit of strategy to pass all the game levels :)

Any way to distinguish the different sheres other than by color? Im a bit color blind. Like that kind of games, but not being abel to discern different sheres from one other , takes a little bit of the fun out of it.

Weird, it says the game is free on the front page... but clicking the link that says free brings us to the game's publish page.

Once you are on the game's publish page, you can download the free demo to try the game. Not sure why Desura marked it as free on the home page, sorry for misunderstanding!

No, the publish page is the 'control panel': Indiedb.com

For some reason the 'banner' on the games page links there and says free, while the entry below has the correct price and links here. Just strange.