Etherborn is an exploration platformer set in a strange and exotic world where the laws of physics behave in a completely different way than in ours. The main character experiences gravity in a direction perpendicular to the surface she’s standing on, allowing endless exploration possibilities in beautifully crafted environments.

This week, our Creative Director Samuel takes over the blog and talks about light, bridges, and Giorgio de Chirico.

Today I want to show you progress on our new level. To start off, let's show some screenshots. 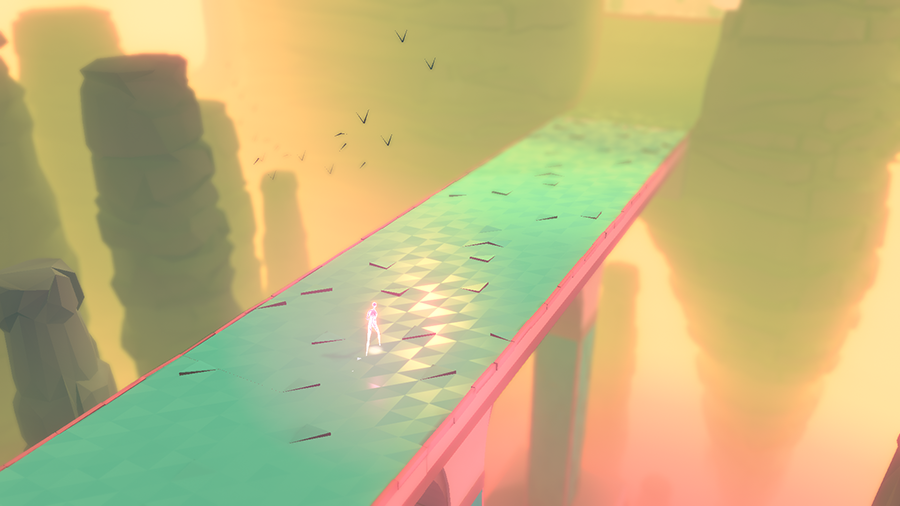 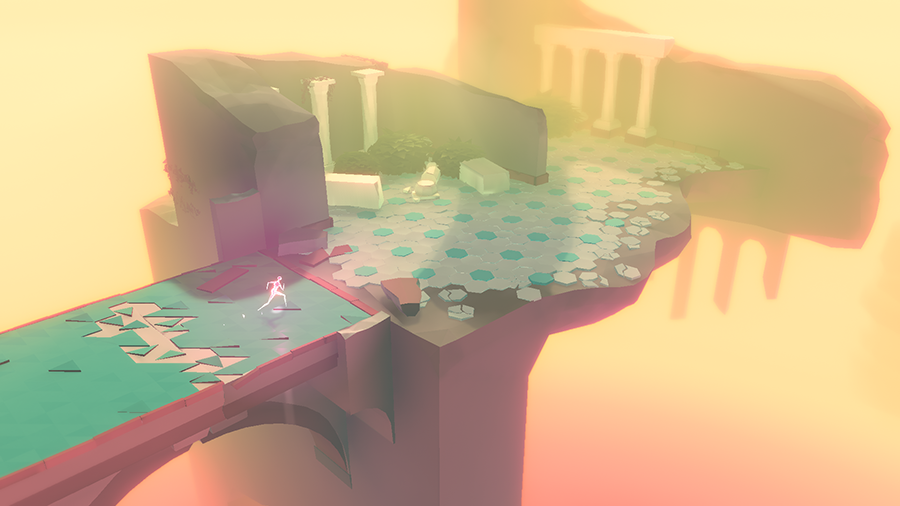 For this level, I’ve faked a bit the flat-poly look on the tiles, because I don’t want to saturate the CPU with excessive geometry calculations (which happens more easily than it seems), so the reflections are actually made with a metallic map for the standard shader.

At first, I created a flat mesh composed of tris with different materials that would reflect light slightly differently, but it just seemed like a waste. To polish it more, I rendered the UVs of that mesh and used as a template to fill with different gray values, ranging from black to white. Lastly, I optimized the geometry and applied the texture, achieving exactly the same result with fewer vertices.
However, hexagonal tiles are actually modeled in 3D, because I wanted to go for a more irregular and “ruined” look on them, and neither normal maps nor relief maps gave the same result (and I tried… but this art style requires sharp shapes, and textures tend to give softer results). There’s also a certain spot in the level where the camera gets closer to the character, so this floor is particularly nice there. 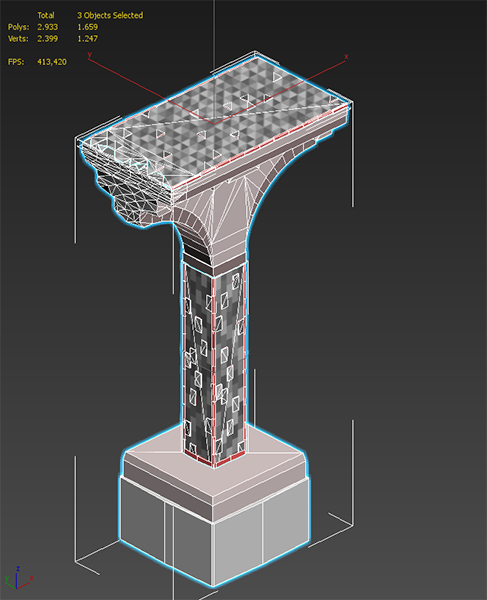 I’ve done different patterns for each floor, and it looks quite nice. It’s also important to scatter around some 3D tiles to make it look more consistent. We should take special care of the edges. The human eye gives priority to the edges of an object, so if you don’t take care of them, models will look flat. Here, everything is in an ambiguous semi-ruined state, so reserving the geometry for irregular tiles placed on the edges works well. However, note that the images have been scaled down for this post, probably making those irregularities look too subtle: 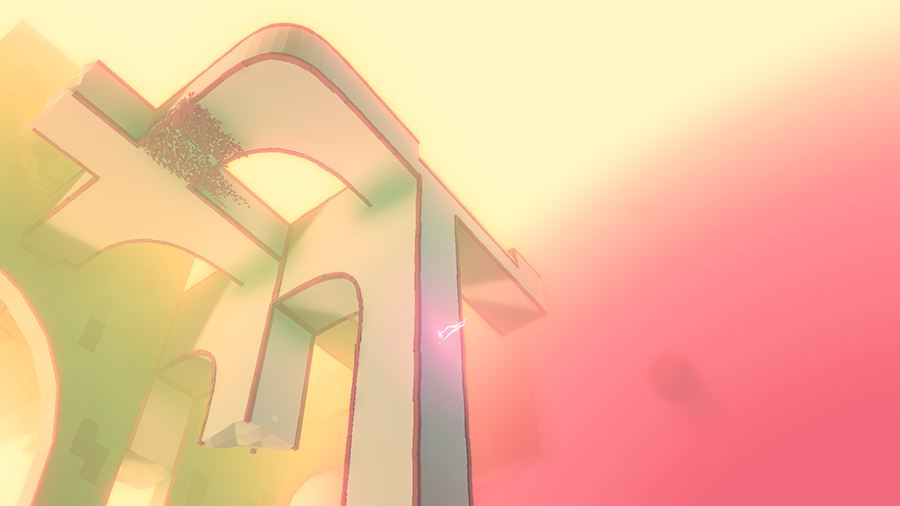 Ok, in theory, some things were working, but there was a problem: the direction of light. In Etherborn, the player can face many different angles, but light comes only from one, so you won’t actually see reflections most of the time unless you’re facing the “correct” spot. The easiest solution is to place point lights all through the level, but that’s also a waste of calculations (and work time). What I did is actually a pretty common solution I believe, but I had to learn it by myself, like almost everything else in the game. 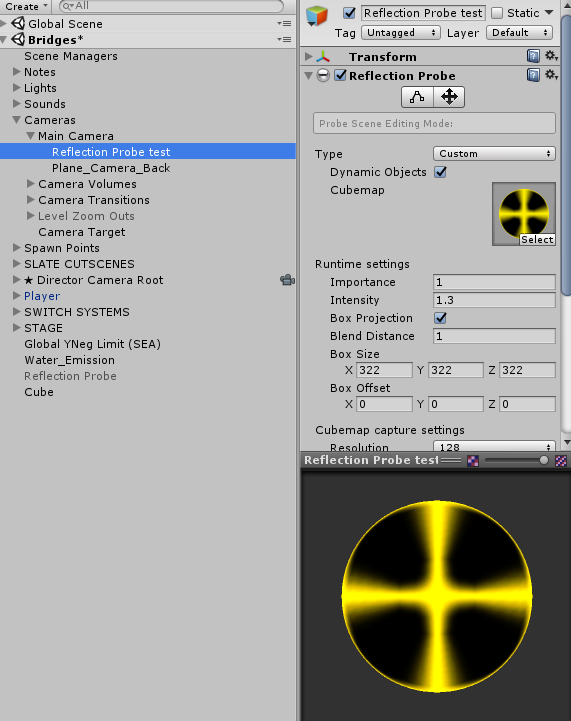 I just painted a simple test cubemap with gradients in Photoshop and made a reflection probe with it. I tried making different reflection probes for each segment of the level, and also making just one for the whole space. However, the cubemap texture scaled accordingly to the size of the probe and the clear bands wouldn’t look as I wished. Final solution: I created a cubic probe with a size proportional to the camera’s far plane and made it its child. The only “problem” is that, even if the probe follows the camera, the texture doesn’t rotate (I guess that should be done by code). Fortunately, it doesn’t bother me too much.

This level is a bit inspired by Giorgio de Chirico (although it also contains some traces of Zdzisław Beksiński), and there are different reasons for this. Regarding art, I like the feel his paintings give, like if time had been suspended in a specific moment forever.
On the level design side, he used a lot of simple architectural elements, and within them, we can find many arched buildings. Those buildings make me think of Roman bridges and aqueducts, like the ones we have in Spain (and Italy, of course – Chirico was Italian). 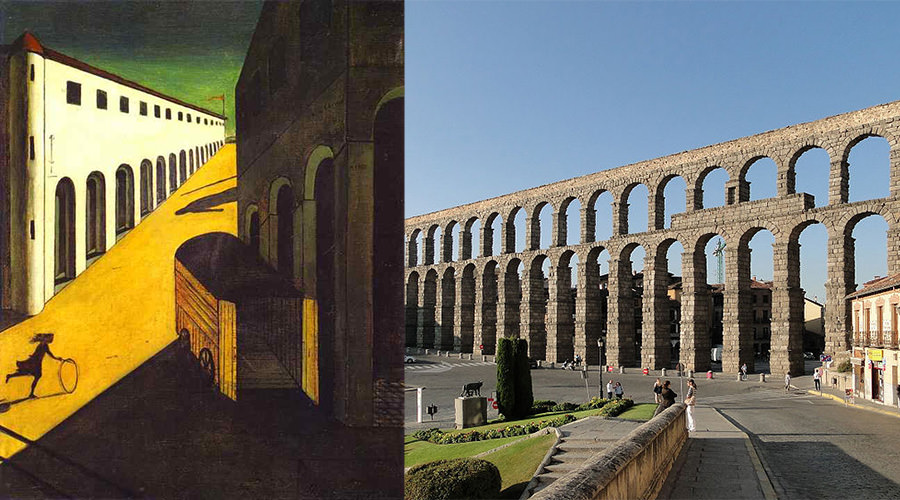 However, I needed to add some big crossbeams for level design purposes and I didn’t want to be excessive with the details either. In the end, I made them more modern, perhaps with a brutalist touch.

But, why was it so necessary to add this type of building? Well, a bridge is a pretty recognizable construction and it’s already in our collective unconscious (almost every culture has built bridges somewhere), making it for a perfect piece to play around showing the gravity mechanics. Everybody knows how a bridge is used, so if you see it in a game, you’ll cross it without asking yourself many questions. But here, when you reach the second one, you switch gravity and end up walking on its side. This way, people get a sense of surprise and they can orient themselves within the game’s space better than if we were already introducing them into purely abstract designs (which will be present later on in the game). We can also use this for the opposite: if we place a group of bridges in unusual ways and with unnatural relations between them (one vertical, another one crossing horizontally between its pillars, etc), players will feel lost, even if we make a linear path.

And, once the main mechanics have become clear, we want people to feel lost. Because Etherborn is, after all, about finding your way through life.

A quick reminder. We are now running our private campaign on Fig.co. If you feel the game has something to offer the world, please spread the news, see our page, and if you really like what you see, make a pledge. Our campaign is here at fig.co/etherborn.

Also, we now have a Steam page, so you can wishlist Etherborn right now! If you do it, it will make us loose our mind in a positive way. And as always, please comment away below, and follow us on Facebook and Twitter.