In Ensign-1 you play the role of a space fighter pilot returning from a deep space colonization mission. On arrival back to our own solar system, you find Earth has been colonized by a hostile alien force. It's now up to you, with the help of your mothership, the Ensign-1, to take it back.

Ensign-1 allows allows for complete freedom in approaching objectives. You can fight from the safety of your spacecraft, or land and exit to explore space stations and carriers on foot. You can commandeer any spacecraft in the game, no matter how big or how small. Defend an asteroid base, or take the fight to the enemy with a huge mothership, friends manning turrets, it's your choice.

The game also features a multiplayer mode where players can explore a randomly generated galaxy, either fighting co-operatively to clean out enemy fighters, or battling each other for supremacy.

Ensign-1 has had a few updates lately: a few sound engine and cosmetic upgrades, and a few minor gameplay changes.

On the cosmetic side, the HUD has been improved to provide players with information on their speed, pitch and heading. It's made of of scroll wheels that adjust in real time. In the future, I might add information on markers to nearby friendly and enemy capital ships. 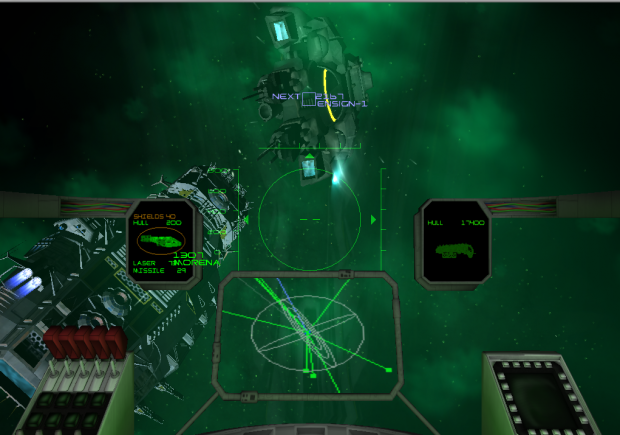 Let me know what you guys think of this one. I've changed the sounds used for homing lock on slightly. Let me know if you prefer the change or would like it to be reverted. Here, give this a listen and be the judge...


I've also added a drone sound as ships are nearby, and you may also hear the occasional laser whiz by as well.

Now to the good stuff. You'll now have a limited afterburner, or turbo, that you can use in game. This will give you a temporary speed advantage over your enemies making it much easier to catch them and shoot them down with your lasers. It also helps greatly when dodging missiles, which brings me to my next point....

If you sit around too long, you may find yourself the target of enemy missiles. That's right! It's not just you that are the predator now. Both allied wingmen and enemies alike have added homing missiles to their repertoire. Enjoy!

There's also a new mission in the game involving the player stealing an alien ship to acquire some intel.


And another where you attack the pirate base.

Ensign-1 gets a new exciting mission added to the game, as well as a redesign of the Ensign-1.

Missions 4 and 5 Now With Dialogue!

Ensign-1's missions 4 and 5 now feature recorded dialog for the mission, adding a bit of tension and scripted events to the mix!

Ensign-1 now has new playable factions in the multiplayer. You can now choose to play as the aliens or as space pirates, and battle your friends head...

Ensign-1 Soundtrack: Soar Among the Stars

Free download of Soar Among the Stars from the Ensign-1 Soundtrack!

Created a wallpaper using one of our screenshots. Put it up for dl so you can decorate your OS with your fave space game.

Hey all, so this game was approved for release on Steam, so expect some news about that in the future!

Just set up Desura on my laptop, tried launching game, does not work :( just says has stopped working, any ideas?

IS this game still in production or being updated?

I think it's done for now.

Every time I start Desurium on Ubuntu 12.04 64bit it claims that Ensign-1 is not install and I need to install it every single time :(

Sorry that's a questions for Desura, I can't help.

Hey! Can you update the mac version?

Hey man, what's up? I noticed you posted a new pic, thinking about doing some more work on this?

ugh, I think I might actually have to pull out again, sorry :/
I tried, just can't get into it again. Would like to eventually see the multiplayer fixed up though.

too bad, but it can be hard to commit hours to something once stopped, you realize how much free time you once had :)

Well I get my fill of video game development from my day job now, and in the evenings I've got other projects I'd like to tinker with.

Hey mate, just a quick question: why don't you want to at least consider a KS campaign ? Ask for a small amount, something that would give you the impulse to keep working and improving the game until it gets to be the best. Something like 20k would be enough for you I reckon and that would also allow you to get more art for your game etc.
At least think about it. I just don't see how this could go wrong. Ensign is your baby and you should keep at it until it grows into a hot sexy woman along the lines of Jessica Alba :D :D

You know I guess it really just comes down to having my fill of video game development at work, which I'm just commited to right now. I don't know if I'd want to leave it even for 20k to pursue Ensign-1 further at this time.
So, the timings just not great, with a new job and all. The other hurdle is I wouldn't know what kind of rewards to offer as incentives, things like that are tough without a dedicated artist to design T-shirts and the like.

That would be cool.

Most indie games focus on simple concepts that can be fully exploited with a small budget. This has led to some great classics, but I feel the possiblity of truly grand-scale indies has been left untapped. Ensign 1 is the sort of game that I wish had 10 million dollars behind it. I knew from the summary that the game allows an FPS portion when your ship is docked, but I didn't realize that you can actually move around your own ship while it is traversing through space. This feature is already implemented…