We are currently facing our biggest challenge to the development of Dungeonforge! Check out our Indiegogo campaign to find out how you can help keep this dream alive! Indiegogo.com


Dungeonforge is a swords-flying, action RPG in the spirit of classic D&D where you, the dungeon master, drive and shape the gameworld and everyone has a chance to tell their own unique story. 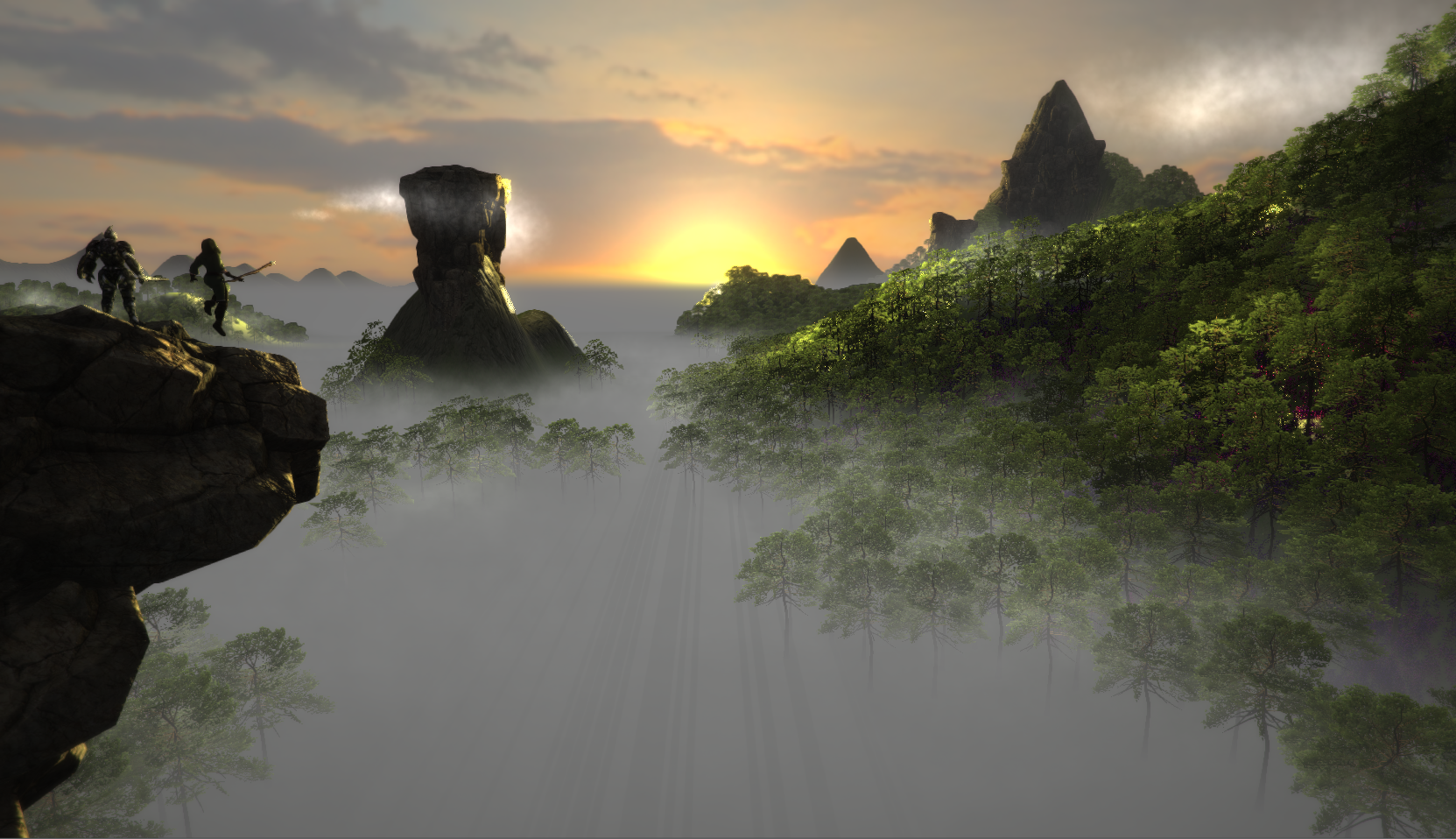 You Are the Dungeon Master

In Dungeonforge all the action takes place in a massive, open gameworld. This world is your canvas; the place where you will tell your story as a dungeon master.

Through our in-game editor which we've termed "the Dungeonforge," you will be able to craft adventures rife with deep dungeons, dark woods, frosty mountain tops, and just crawling with the unspeakable legions of darkness. Your content then becomes part of the over-arching gameworld for all to enjoy. You can script quests within your adventure for players to complete, or even perform a "Live Telling" of your adventure, wherein you actively take the role of dungeon master, playing the part of NPCs and controlling monsters to shape the experience of the players dynamically, in real time.

Features of the Editor

A token may be purchased in game that when used, gives the creator of the dungeon a tip, redeemable for real-world currency. The user of the token gains improved loot drops in return for their generosity.

Dungeonforge features a unique blend of gameplay concepts. We went with a top-down perspective, so the game shares the same simplicity in the control scheme as games like Diablo. At the same time, we love the engaging combat of games like Dark Souls. Thus the combat is driven by timing your mouse clicks to form combos, avoiding taking enemy damage by dodging and parrying, and positioning yourself well and waiting for openings to attack. We knew going in, with the idea of a game driven by player-made content, that the gameplay would have to be good enough for people to actually want to make content for our game. We think we've got a fantastic, well thought out blend of concepts that truly sets gameplay in Dungeonforge apart and makes it a can't miss type of experience. 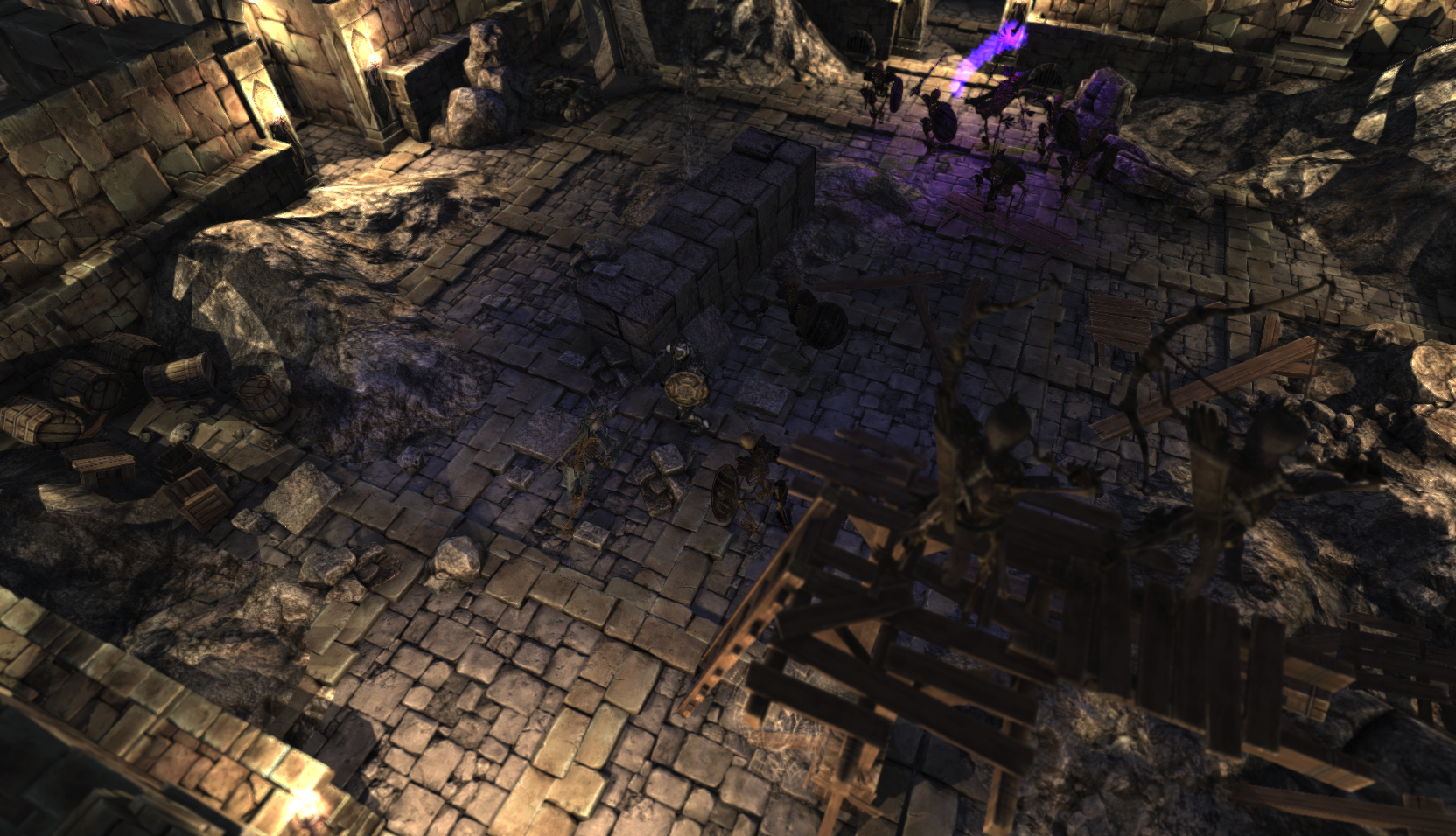 Dungeonforge will feature five playable characters to start with, each with unique traits suiting various playstyles. Each character will also have a unique back story which will be elucidated via first-party campaign-style content. Each character's campaign will contain around 20 hours of gameplay. Future playable characters will be released over the life of Dungeonforge, each with an accompanying campaign of similar length. Whenever there's an opportunity to improve the game via new editing tools, a first-party adventure will be released to showcase the new tool.

Both LAN and Same-Screen multiplayer (using a mix of gamepads and mouse/keyboard) will be available to support that true, old-school feeling of playing D&D with a bunch of buddies in the same room.

We are completely thrilled to be bringing Steam Workshop support to Dungeonforge at launch! Using our custom mod tools and/or your favorite 3D content creation programs, you'll be able to create and submit content for everyone to use in their dungeons and adventures.Create custom:

A voting and comment system will ensure the best made content rises to the top and that new submissions can be easily found and tried out.

Use our tools to create your own custom dungeon tiles from either from scratch or from a simple template, by just dragging and dropping elements, like the rocks and pillars in this example, onto your tile: 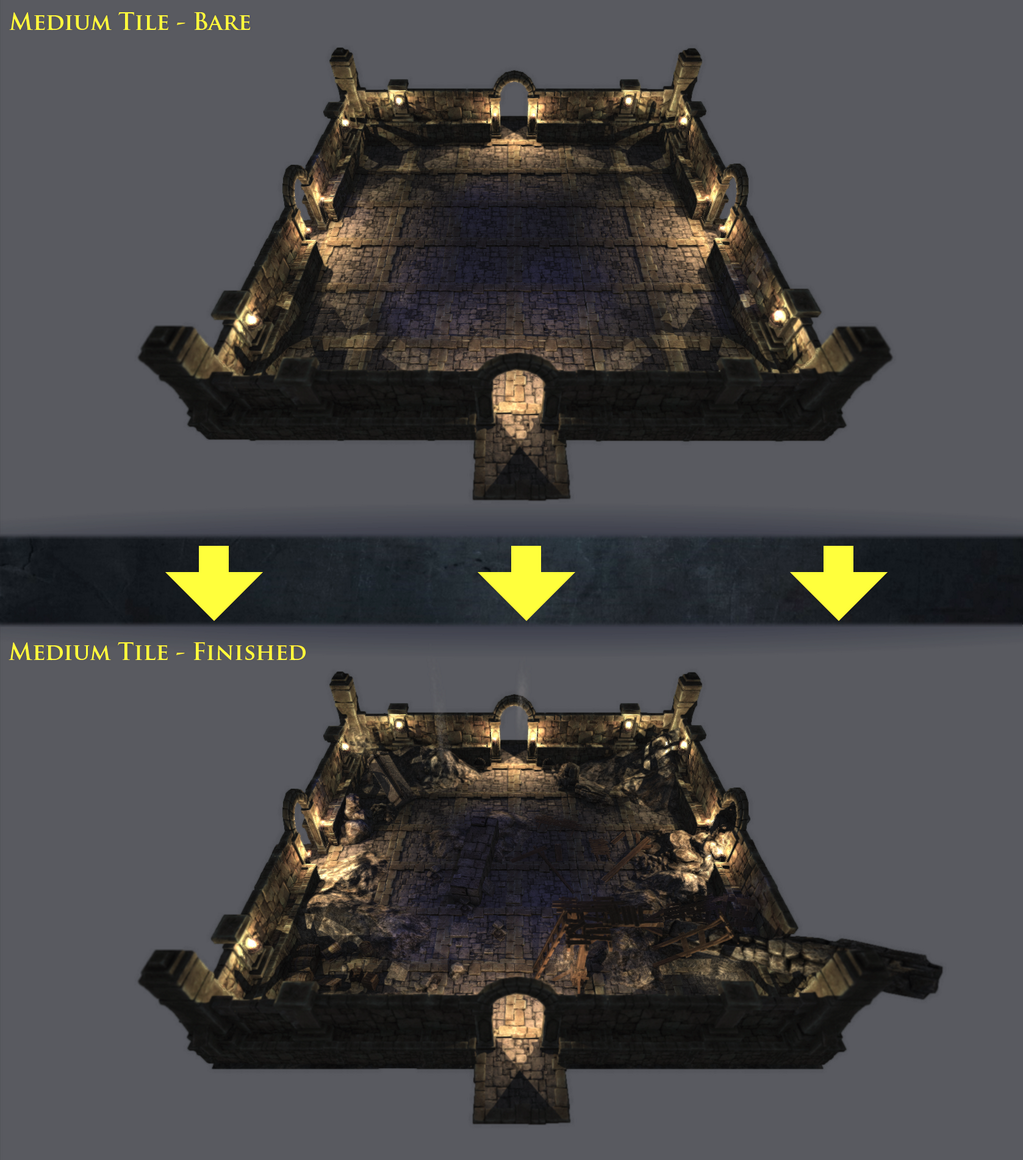 In addition to LAN support, Dungeonforge will feature dedicated servers for those wishing to host their own, entirely self-contained gameworlds online and allow friends to play and create content therein. Loot, characters, lore and even the gameworld itself can all be uniquely tweaked or replaced entirely on dedicated servers for an experience that's as unique as you want it to be.

Administrators will have a full suite of moderation tools including the ability to choose who on the server may create content, approve content to appear in the gameworld or block content from appearing at all.Dedicated servers may be set to private for only certain people to access so you and your adventuring buddies can enjoy your content together, or can be made public so that the world can enjoy the world you're creating.

Dedicated servers are entirely self-contained and separate from other content. Characters created and loot obtained on a dedicated server stay on that server.

Dedicated servers give players even more far-reaching control over their unique experience in Dungeonforge. We're beyond excited to see where creative and imaginative people take this! 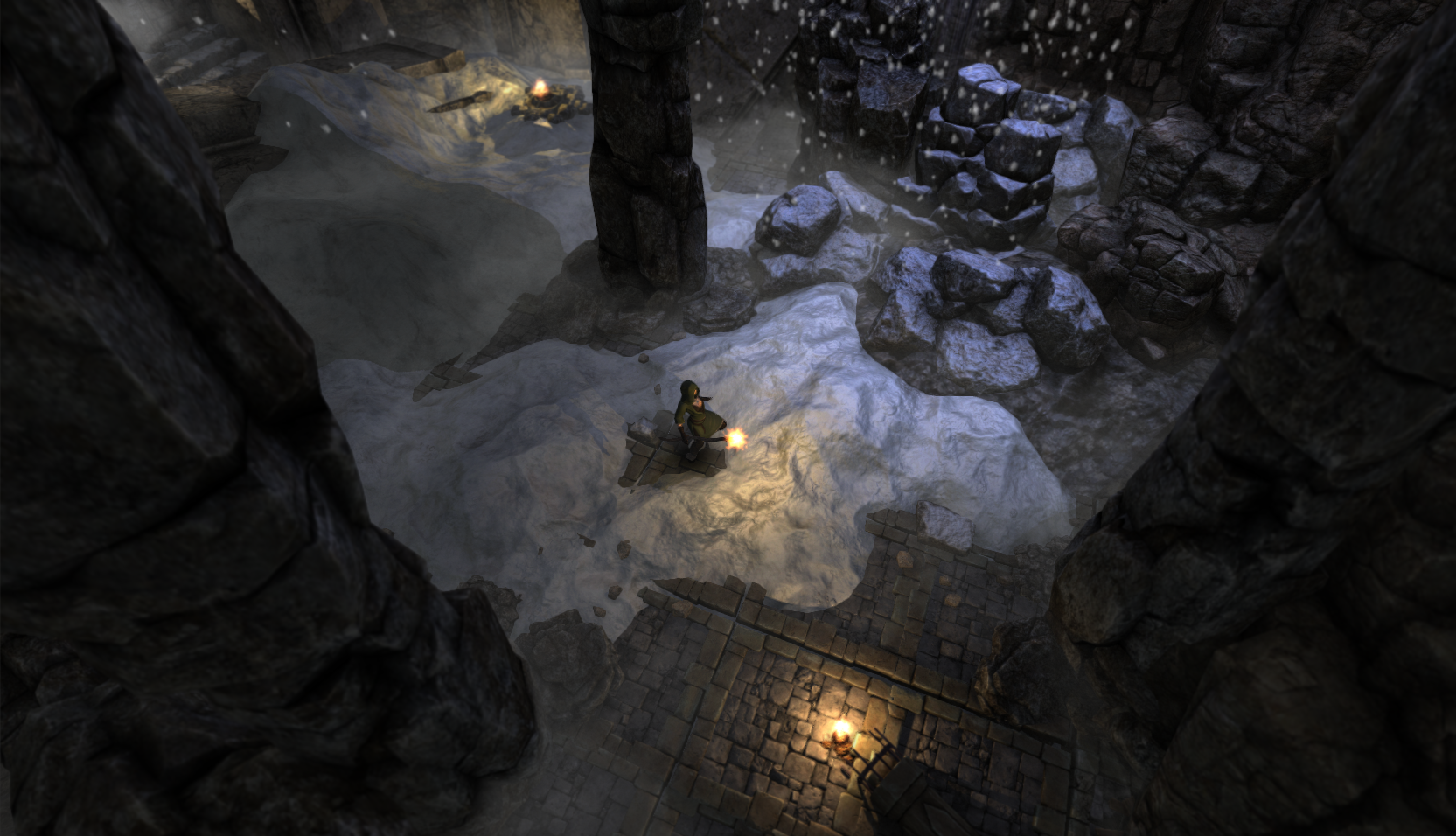 You can help make this happen. If you like what we're doing and want to help Dungeonforge to see the light of day, we invite you to pledge your support to our Indiegogo campaign. Visit Indiegogo.com, pledge and share!

Our new wiki is up at Dungeonforge.gamepedia.com. Hosted by Curse.com, the same folks who host the official wikis of WoW, LoL, Minecraft and many others.

Thanks for voting and helping Dungeonforge on it's quest to become the 2021 Indie of the Year. You are now in with a chance to score some free games. Help this game secure more votes by embedding the widget (or link) we have included below on your favorite sites.

Hi, I'm Mason Stanford, Studio Lead at the Collective Dream Studios. I speak for our whole small indie studio when I say that I'm currently living a life-long dream. I actually make video games for a living! If you could go back and tell my nine-year-old self - who was constantly doodling Super Mario Bros and Sonic the Hedgehog all over ever available scrap of paper - that I would be living this dream, I'm pretty sure his little heart couldn't take it! I have had the privelege of bringing others that shared the same life-long obsession onto my little team and we've been hard at a project that has been truly fulfilling. This dream even has a name: Dungeonforge. Together, we're in the process of making that life-long dream of actually making a game come true.Dungeonforge, as I'll explain in full detail a bit further on, is a game about telling your unique story. At it's heart, Dungeonforge is an Action-RPG in the spirit of classic Dungeons and Dragons where you, as dungeon master, drive and shape the gameworld and everyone has a chance to weave their own unique part of gaming lore. As an avid fan of D&D, I can't even begin to express the level of excitement we have to be working on a game that promises that! The gaming community has already expressed a collective excitement about what we're working on by voting Dungeonforge onto Steam Greenlight after less than two weeks on the platform! The outpouring of support has been astounding! We want to deliver on the promise we made by delivering a game that exceeds the expectations of our supporters!

That dream right now is being threatened with being extinguished altogether. Principle members of my team are Chilean nationals and dear friends who were here on student visas while attending BYU, another life-long dream. We have had very little in terms of funding for our project and once the money dried up, they were forced to return to their home country, being unable to afford to stay in school here. Once back at home, they have also had to take on regular work to pay for their living while we continue to develop our game in part-time and with tremendous distance between us. Due to that distance, we've faced delays and setbacks that we hadn't anticipated and development has gone reeling off-schedule. Back states-side, for me it has become impossible to continue development and support my children without taking on more than one job.

So, we're at an impass. Without funding of some kind the dream will be extinguished before it's fully realized. With a small amount of funding, we partially overcome the obstacle of distance with better telepresence software and equipment that will help us be closer as a studio; almost as if we were in the same room.

With a bit more funding, we may even be able to get these guys back to the states, back attending their dream school and back at the studio working all in the same room together again. We may even raise enough to allow us to work full-time, without taking other jobs, and keep our own lights on, rent paid and food on the table while we bring this dream to life.

To that end, we're approaching you via a small IndieGoGo campaign to aid us in that endeavor. To pledge, go to Indiegogo.com.

We've been making rapid progress on Dungeonforge and we're going out of our minds with excitement to show some of it off!

Before saying anything else, we want to take a moment to offer our heartfelt gratitude to those who have seen the worth of what we're doing and translated...

We are thrilled to bring you this new trailer showing a deeper look at an early version of the creative tools you'll be using in Dungeonforge.

I was able to get into touch with Mason ( the dev who set up the indiegogo etc. ) He told me that there have been setbacks, but they are trudging forward as best as they can. He hopes to have a demo of sorts up and available soon. He would also like to put out an announcement shortly, though I can't say how soon for either of these. For those of you who have been waiting anxiously, just hold on a little longer. They are doing what they can and I'm sure we will be ecstatic once things get rolling!

its the 19th of November and its not released. :(

It will never be released~

I really love this approach and I think this would be great for several people. DM's love to play games like this to get more of a feel for their campaigns I think. Good Job!

Looks, amazing. Would love to see some internet based multiplayer. Seems like it could be a great coop game.

Just watched the latest video, I like the concept of the game and it looks really interesting!

Wondering when this will be released. Maybe soon