Thanks for voting and helping Daily Chthonicle on it's quest to become the 2022 Indie of the Year. You are now in with a chance to score some free games. Help this game secure more votes by embedding the widget (or link) we have included below on your favorite sites.

PC Gamer - Free Games of The Week
"...and whadda ya mean you're not downloading this already?"
"...a wonderfully original take on the mythos..."

Unwinnable - A Letter to The Next Editor
"It seems as if the town itself sucks color from anything that is not sanguinary or putrid."

This game lets you try on the role of a Supernatural Newspaper Agency boss and editor. The world it takes place in is a dark and haunted one, with ghosts, zombies, monsters and even shapeshifting murderers, pretending to be human after they have stolen their victims' bodies or infiltrated the humanity. It was inspired heavily by the works of H.P.Lovecraft and it builds on the atmosphere of uncertainty and noir of the 1940s.

Send your sextet of weathered journalists, detectives and occult specialists to investigate murder, affair, and horror in the Town.

Each time, the story will be different. Sometimes, a werewolf is shredding innocent (and less innocent) victims to pieces and it is your task to unmask the creature. Other times, it will be a body stealing alien from outer space, a mummy that some misfortunate archeologist has excavated and is now haunting them. Perhaps it will be Jack the Ripper, still mysteriously alive and lurking in the streets at night.

Or maybe there is a really bad big tentacled monster hidden in the cellar of the University?

It is for you to find out and entertain your readers while bravely standing up against ancient evil. 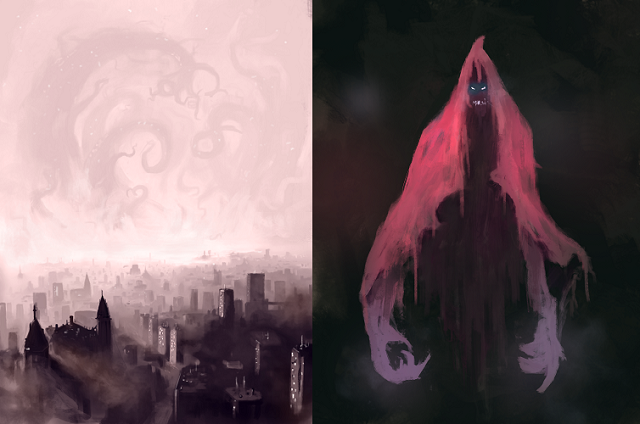 This article sums up the development of Daily Chthonicle, including the last added features for the final release.

This article covers the changes and new features between 0.2 and 0.5.

A new update for Daily Chthonicle - Editor's Edition was released on Steam Early Access, itch.io, GameJolt and IndieGameStand. Here is a list of new features...

After having analyzed some of the let's play videos, I decided to make some minor alterations to the flow of the game.

This is the final beta demo of Editor's Edition. The Demo has no Save & Load Game feature and no sounds. It only supports the Easy Long Game.

The Demo has no Save & Load Game feature and no sounds. It only supports the Easy Long Game.

The Demo has no sounds and only supports the Easy Long Game. Use F5 to toggle the fullscreen mode.

I've never seen such type of games before, looks like something unique! Great work!

I was watching this game since it was on GameJolt. It's really come far!

Is there a way to save your game to come back to your investigations later or is not implemented yet ?

The UI is a little confusing at first but with trials and errors you get to know what does what, and the cases are really interesting.

The save function isn't implemented yet, but I'm planning to include it in one of the future releases.

As for the GUI, I agree, the ergonomy needs improvements and a more thorough tutorial explaining the interface itself, wouldn't hurt.

As for the cases, I am glad that you find them interesting. Really in terms of solid narrative generation, this is merely a humble tiny step, but I really hope it is a step in the right direction.

In any case, now that the basic game stands on its own, I can finally focus my full attention to exploring the storyteller algorithems and finding new interactions between generated narrative and the player.

If you would like to join the ongoing discussion of the game with the author, you can do that here:

Of course, I will be replying to any comments posted here as well.

And, here is also the review of the game from Rock, Paper, Shotgun:

This game have great potential

The Casebook of Terry Winter Family

The Amazing Fantastics Party Based