Daring Adventure is a fantasy collectible card game. You will assemble your party of heroes to fight monsters inhabiting various locations. Along the way, you must collect an arsenal of elemental attacks and treasured items to challenge the dreaded Chaos Beasts. The heroes and treasures unlocked during your travels allow for almost infinite customization. You will be able to change your party and elemental attacks to give yourself the most powerful arsenal against the beasts in a certain location. Or you could load up on treasures and let your shinies do the talking. The way you take down your foe is entirely up to you.

Thanks for voting and helping Daring Adventure on it's quest to become the 2021 Indie of the Year. You are now in with a chance to score some free games. Help this game secure more votes by embedding the widget (or link) we have included below on your favorite sites.

Version 1.2 update has been released for Android (and Apple) for both the free and paid versions. You can find the links at the bottom.

Here is the third treasure card that we have been working on:

The Breastplate of the Forge is an Armor type equipment. As indicated on the card, it is a crafted element with a +1 brawn bonus. We have finally decided on how we want the equipment to work. The player will be able to equip one weapon and one non-weapon per hero. This was chosen because the space between the cards would be too cramped with more than that.

When the player clicks on a treasure card and then attacks, the system puts the weapon or non-weapon next to the chosen hero and changes that hero's attributes. I will get into those changes in a moment. First, here are two screenshots showing the prototype of equipment: 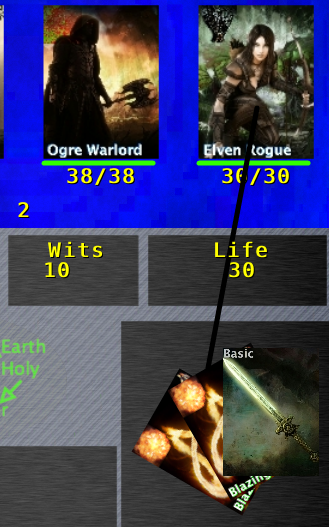 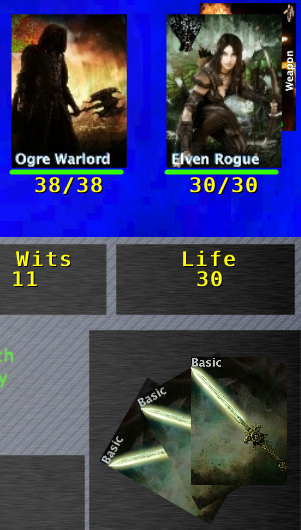 In the first screenshot, the player has clicked the Blazing Whip card (shown in the previous news article) and then on the rogue. After pressing the attack button, the rogue equipped the weapon and it stayed attached for the rest of the battle (or in this case, until the rogue was knocked out of the fight).

We have also finalized how equipment will affect attributes. Obviously, the first change affect the hero's base attributes. In the screenshots above, you can see that the rogue originally had 10 wits. After equipping the Blazing Whip, the rogue's wits increased to 11. This is indicated by the one wits symbol in the top right corner of the weapon card. One side note, in the previous news article and even on the card graphic, I put it in as changing the mojo attribute. It is, in fact, a wits based weapon. Above, the Breastplate of the Forge is a brawn based equipment and would increase the hero's brawn attribute by one.

The second effect from equipment Treasure cards is a bonus to attack or defense. We have not ironed out the exact numbers for each of the planned cards. However, it will be a bonus of one through three. Just like the hero attribute change will be a bonus ranging from one through three. For a non-weapon card, the defense bonus will be against creatures that have the same attribute as the equipment. Therefore, the Breastplate of the Forge will give +1 brawn and -1 damage from crafted creatures. When attacking with the Blazing Whip, the damage will gain +1 if you use a fire attack. This is shown below: 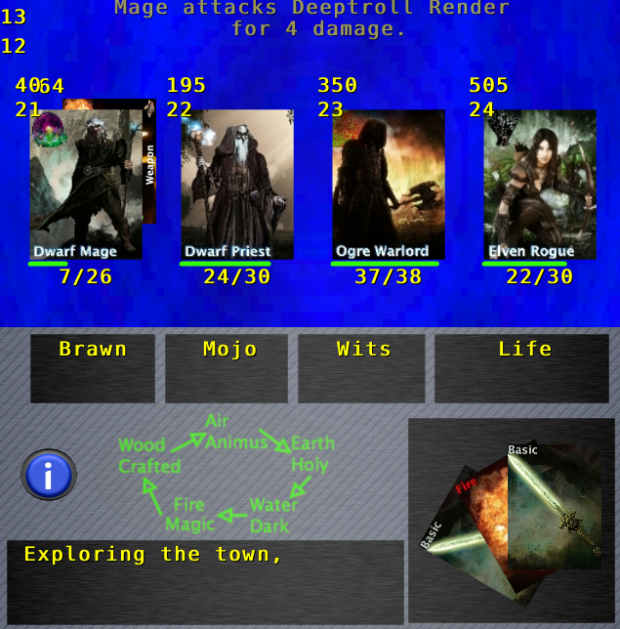 Do not mind the random numbers floating around while developing the prototype. The key point of this screenshot is the top left. The Mage had just used a fire attack on the Deeptroll Render. The attack roll should have been 12. However, since the Blazing Whip was equipped, the attack gained +1. Taking everything into consideration, you can build your decks to create massive attack boosts. Consider this example:

The Ogre Warlord has 11 brawn. If you equipped a +3 brawn weapon and armor, the Warlord would then have 17 brawn. The Ebon Axe is an earth type weapon. If the Warlord used a sigil earth attack (his element), he would gain +5 to his attack roll. Let us say that the Ebon Axe also gives a +3 bonus to attacks. Since an earth attack was used, the combined attack bonus would be +8. Finally, you could also add in an attack modifier from location and elemental control. If you were fighting a Leperous Troll (water monster) at the Geysers (earth location), you would gain +2 control (since earth controls water) and +1 location bonus. Considering your Warlord would already have a +17 bonus to attack before adding in the 2d6 dice roll and that the Troll only has 12 hitpoints, you would easily win that round.

More 2.0 news announcements will come. Thanks for Reading!

In that prototype, Deck 1 is usable for adding in a Healing Draught Treasure Card. The addition and removal of the healing draught from a deck is functional. It only works for Deck 1, but you can take it into battle with you. The Healing Draught heals for 10+2d6 hitpoints (but not over your maximum hitpoints).

We are tentatively scheduling the version 2.0 release date for January of 2016. Once of the features in 2.0 will be Treasure Cards.

Version 1.2 is almost ready for upload. It includes changes to the tutorial and indication of map progression.

This is the official announcement for the version 1.0 release of Daring Adventure.

We are hard at work on Version 1.0. Already included are new attack cards, tutorial system, loot reward system, combat progression, and a bunch of smaller...

This is version 1.0 of Daring Adventure. It also include a small fix that will be included in the mobile version 1.1.

This is version 1.0 of Daring Adventure. It also include a small fix that will be included in the mobile version 1.1.