A medieval RTS with an authenticity surrounding the feudal history of the middle ages. Taking inspiration from previous 3D sprite - based RTS games in the past, to construct a worthy successor. However with the interest of not remaking those games, but creating something with it's own niche. The images contain small thoughts and information!

To start off this part of the tech tree will cover the Archer-, Pikeman- and foot Knight- lines of the west european kingdoms. It will feature the details of each of these lines and it's individual components or what their function will serve aswell as some features surrounding these units. Disclaimer: This is work in progress and can/will change during the development, however it goes through what I plan right now. Feedback towards the tech tree and it's components are welcome and I will take it all into account at the capacity that I can.

Also seen in the tech tree is the four centuries available. The 1100 will provide the player with their starting century, it will feature a small amount of upgrades and few units to begin with for gameplay reasons. This is just the start and not in focus like the other three centuries which features several more units and upgrades.

The only revealed faction is the Kingdom of England, also I will unveil the Kingdom of France which will comprise the west european kindoms, I chose these because they are some of my favourites due to their intrigue and how they function during this period. As the game will grow, I almost expect suggestion on factions that people will want to see. So I have been giving that some thought.

With that said let's go into the first line which has the first unit that the players will get to use. The spearman...

With a norman style armour, the large kite shield and a spear. The spearman is the first basic infantry type unit that the player will be able to recruit. The function of the whole of the pikeman line is to be a backbone force of any army. Spears, halberds and pollaxes were battlefield weapons and they will be treated as such in the game. They appear as what I currently call Levy, which are units that cost no silver (A finite resources, more on that later in the foot Knight section).

The pikeman line will be difficult to tackle for both mounted units and other infantry units, aswell as well-armoured soldiers like the foot Knight with their armourpiercing (Ignoring armour, dealing more damage). Specially with the 14th century upgrade since it will include even greater armourpiercing. However their weakness will be archers and crossbowmen.

On the topic of the archer line. It features bowman, archer and for the Kingdom of England they get the Longbowmen unique unit.

The archer line starts in the 12th century with the bowman which will be the first ranged unit. The archer line is a "Court" type of troop since it will cost silver, having to train and field archers are more expensive than your average footman. With that said along with the spearman line they provide dominance on the field of battle.

Englands armies at the time were mostly comprised of longbowmen. Since that is of importance also in the game, they get the unique unit Longbowman. As the icon suggest the Longbowman is both a strong archer, but they will also provide able fighters, this variety along with foot knights and halberdiers should be a strong force to be reckoned with.

To continue on the line of the foot Knight. These are the second most expensive unit only next to their lance wielding mounted knights. They are themselves armed with the best armour, they are a walking menace on the battlefield. They decimate most of the other unit lines with impunity! Arrows bounce of their high armour values along with any other weapon than a lance or a halberd will find themselves out of luck. The foot Knight is a "Courtly" type of unit as they cost a small investment in silver to be fielded, as such they make up for their expensiveness as excellent fighters.

This is the start of the tech tree. I will refine it along with more specifik information of what importance some buildings will play along with a kind of Lord & Castle system.

I hope you enjoy the reading. 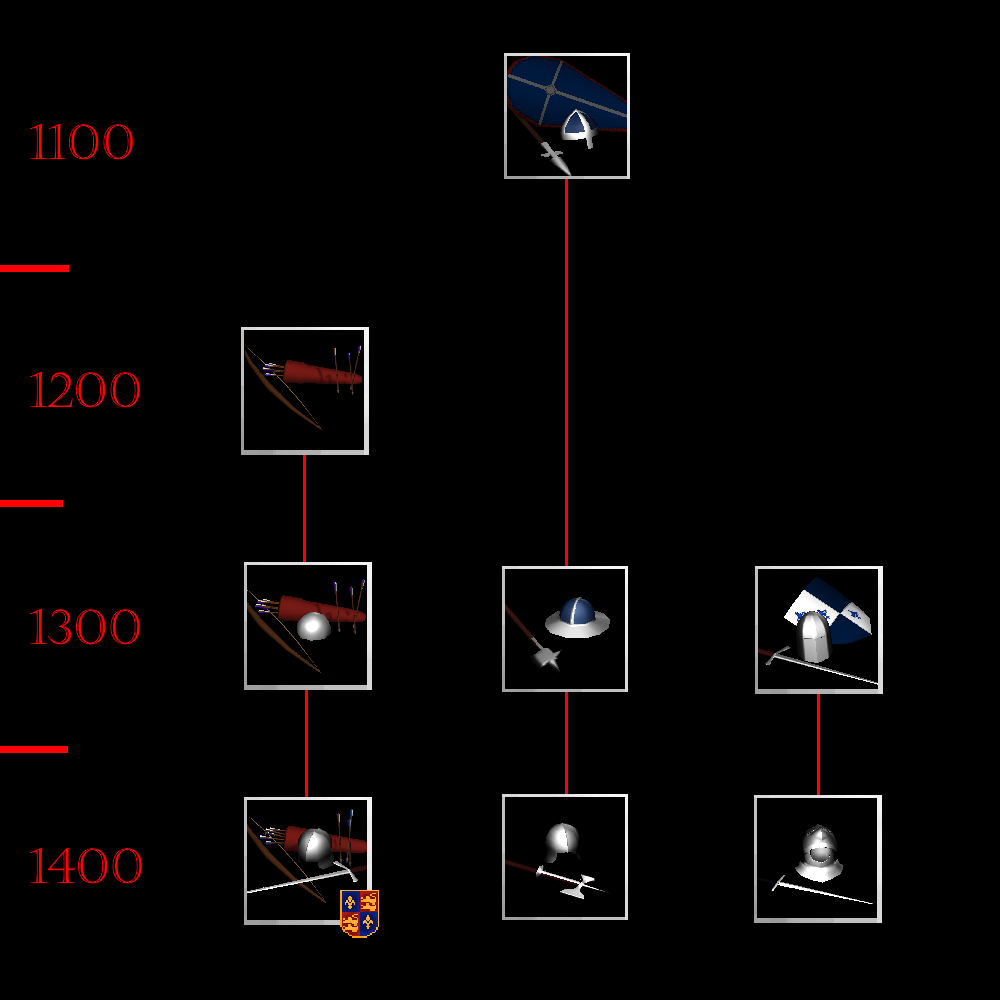