Caapora - Oath Of the Forest

Caapora - Oath of the Forest is a stealth-based third-person single player game, where the player embodies the animals of the Amazonian Rainforest and fights to reclaim their land from loggers, poachers, and companies. By shapeshifting between animals, the players will destroy the enemy camps and drive them away.

Devlog #4: Art Sleuth - the case of the Machines

Hello everyone, and welcome back!

Catarina here to give you some intel on how we are creating some of the assets for our game Caapora - Oath of the Forest. Today we will talk: Machines!

In this article, I will focus on our process to create these assets, from research to modeling. Like in every project, ideas come and are discarded. Although not all concepts made it into modeling, the process for creating the assets that made it in-game was highly influenced by these earlier concepts.

When starting out any assets for a project it’s always commendable to do research before starting. Deforestation has many aspects to it - logging, legal and illegal, poaching, resource exhaustion… - but in order to make the production more manageable, we as a team decided to focus on logging. The concepts and decisions made through this time influenced the current designs and models, even though we have changed the current playable level to be about illegal poaching.

The following mood boards show the vision conceived for the look of the machines. The story of Caapora - Oath of the Forest was that the destruction in the Amazon had affected an uncontacted tribe deep in the Rainforest, and a warrior decided to avenge their home. This storyline allowed us to put the player in the perspective of the victims of Deforestation.

Which led to an artistic breakthrough: how would an animal/person interpret the machines if they had never seen anything similar? 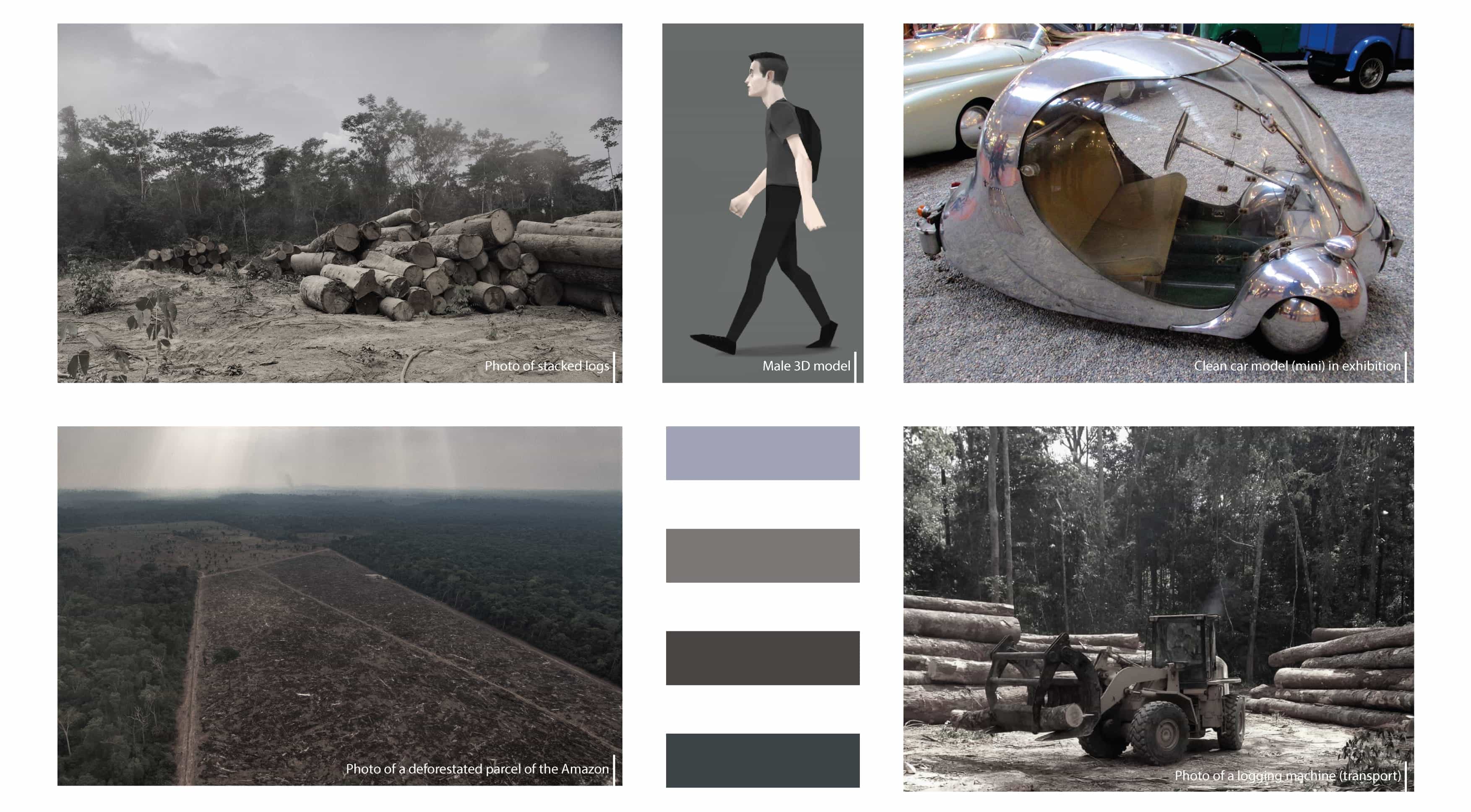 The answer found was to use both color and shape to interpret both these machines and their purpose. It was decided that the camps would be more desaturated, in a way to represent the lack of life. As for shapes, the machines actually had to look familiar, natural, because the boxy shapes we use in most of our designs nowadays are not very common in Nature, contrary to curves and spheres. Using more primitive shapes, like spheres and cubes, along with chrome-like materials, created an aesthetic that gave the machines an extraterrestrial quality that could give the player enough alienation from the human settings in order to emotionally connect with the animal and native characters.

In Caapora - Oath of the Forest, we also thought of machines as their own characters. By all means, an animal who had had no contact with a tractor could interpret them as another animal, bigger and more menacing. Inspiration was drawn from Mad Max: Fury Road. In the movie, cars are converted into war machines, each one modified to the driver’s taste and to look more fear-striking, basically a weapon on the open road. 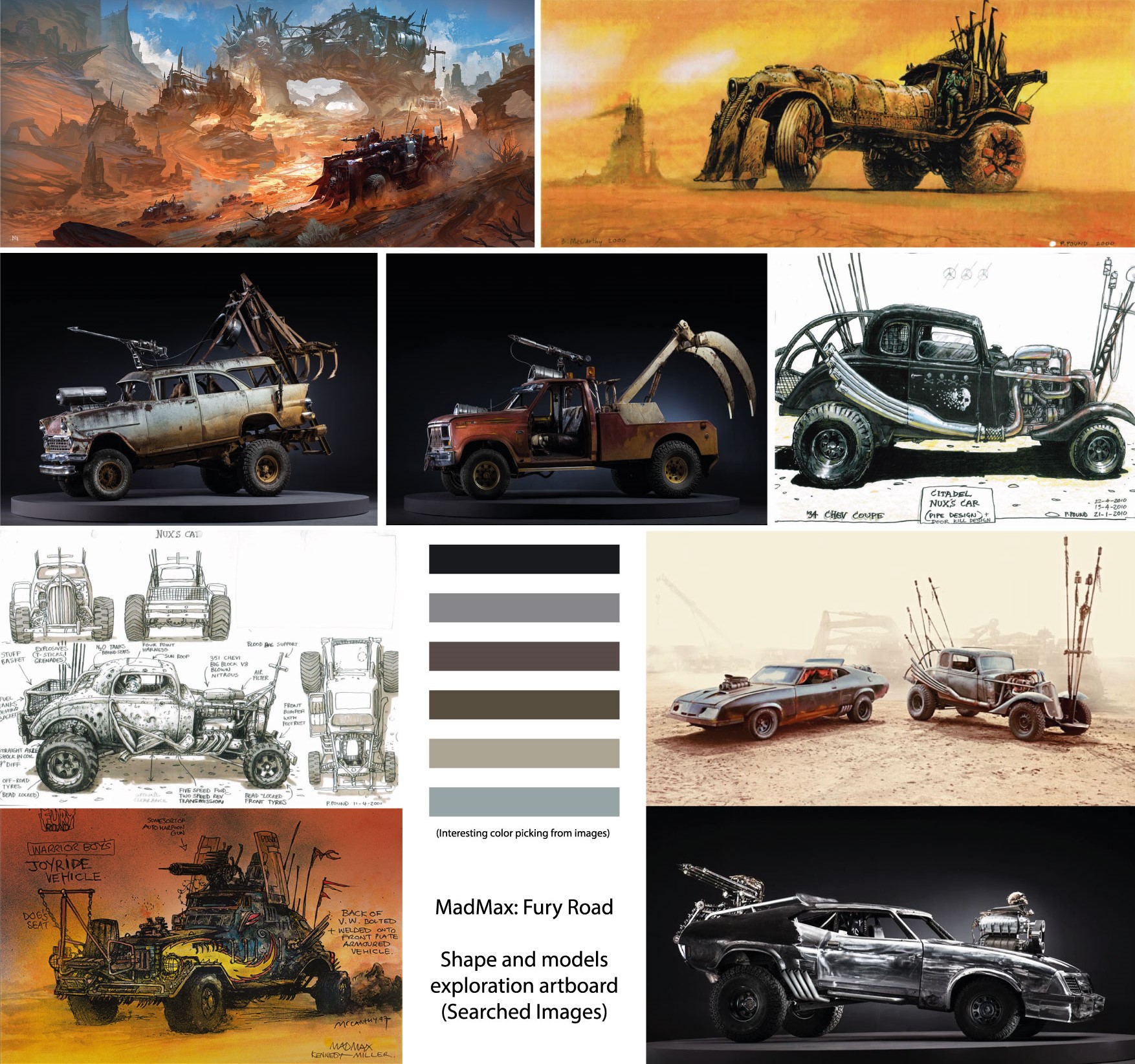 The point was to study how the creative team behind Mad Max: Fury Road approached modifying known car models and adulterated them into war machines while preserving the basic identity of the object. In most models, the base car is somewhat recognizable, but the biggest changes were to wheel size, lifting the car off the ground; addition of an outer coat, functioning as armor; and inserting tall and/or sharp objects, like spikes, antennas, or scythe-like blades.

With all the research so far, concepts become more cohesive, as there is an aesthetic baseline to follow and refer to. 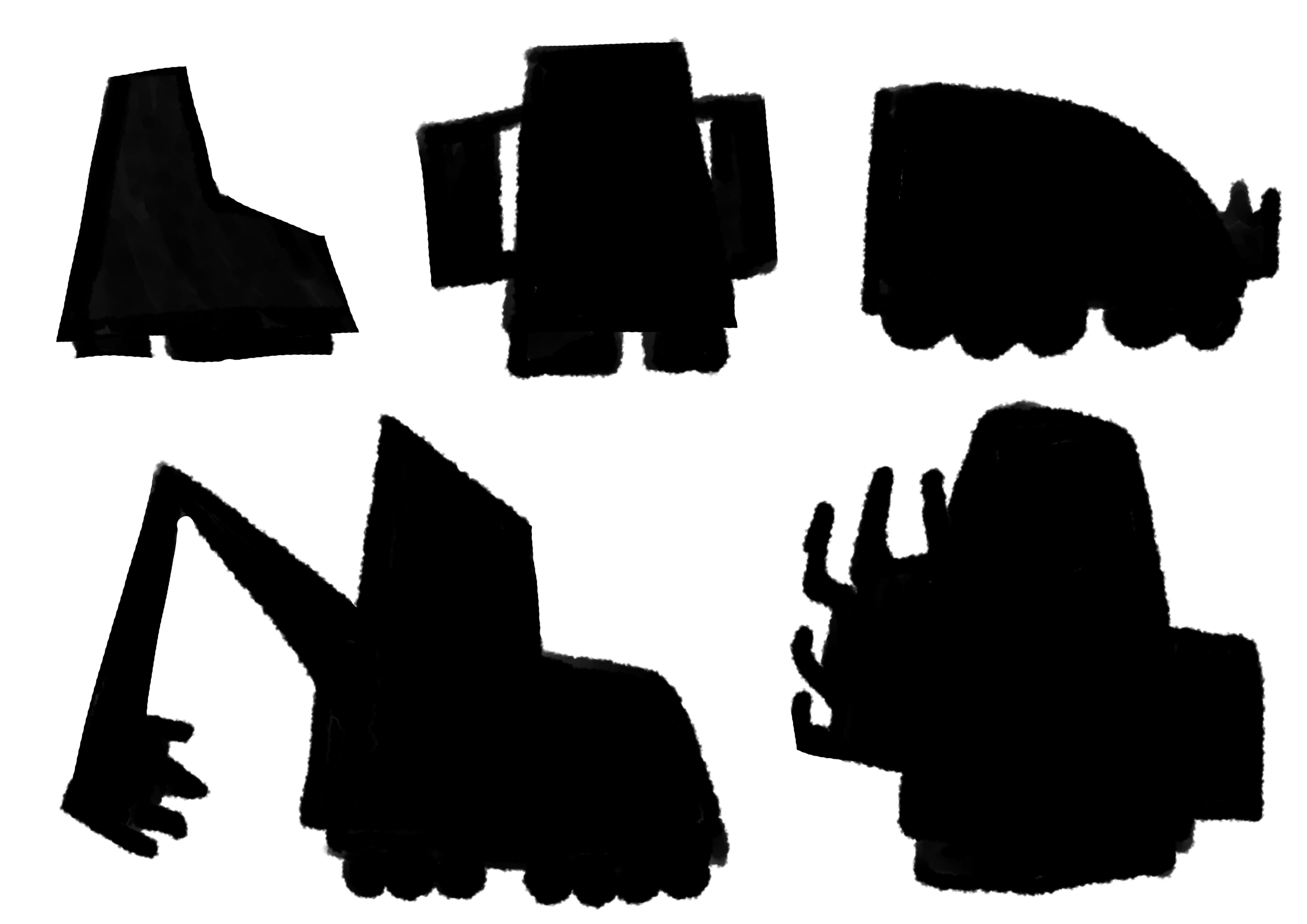 When creating thumbnails, the point is to figure out the anatomy of these new objects that mix the fantasy of the world of Caapora with actual objects used in the camps. Not all thumbnails are inspired by real machines, but all concepts aim to have a level of impact on the player, to mix the familiar and the menacing. Animals and plants were also an inspiration to create the overall shapes and help with that familiarity.

From this process, some designs emerged. The most developed was a machine coined as Pincer Crusher, that could bite and tear trees, possibly transporting them. The Pincer Crusher was not meant to be a gameplay element, but served as an ambient piece and helped with the overall feel of tension and smallness. 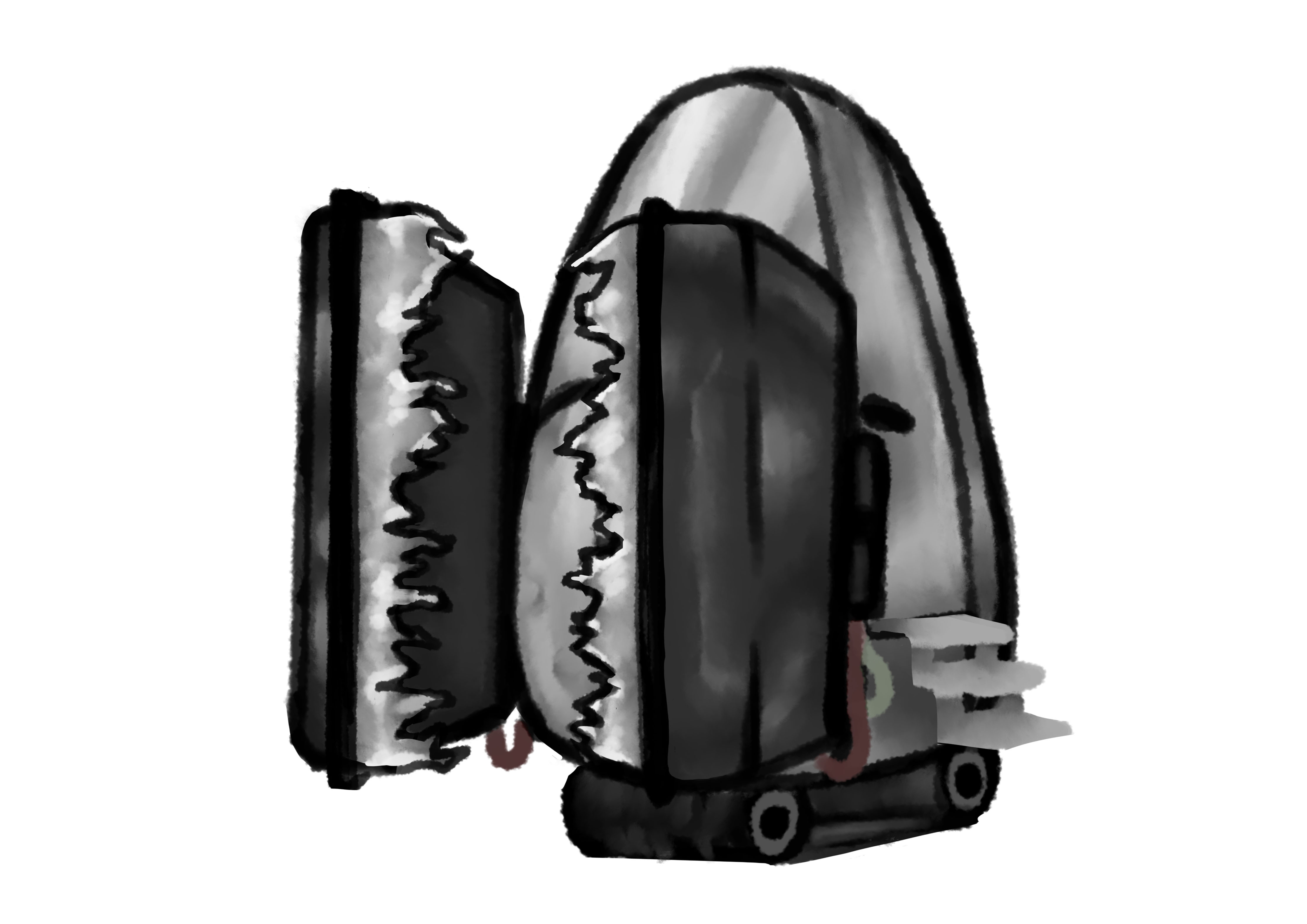 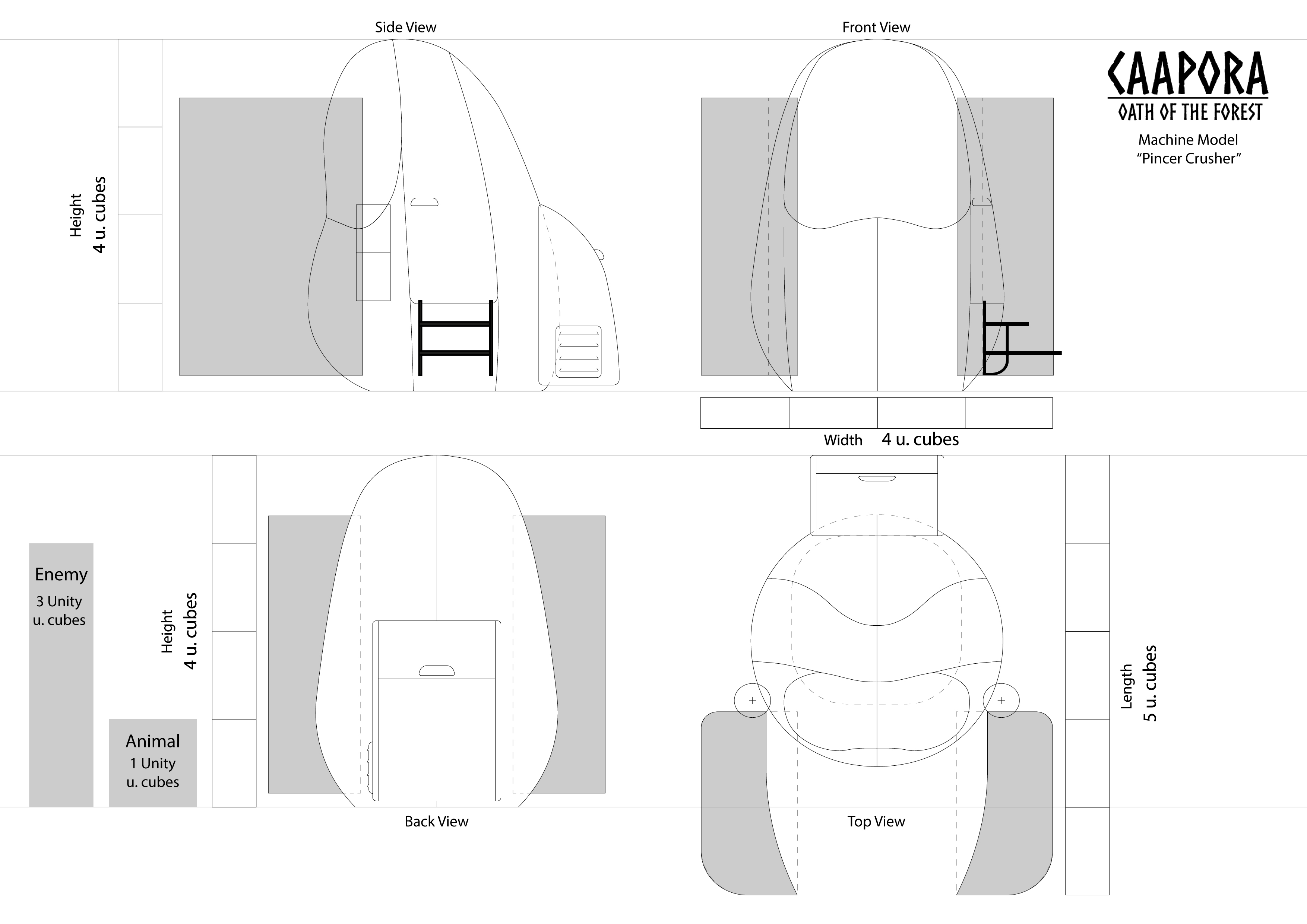 However, the level narrative was changed from logging to illegal poaching, and the Pincer Crusher was discontinued from the production line in favor of other more needed models. Even so, the exercise of creating this machine was not in vain and helped to hone the look and feel of the game.

Even though the Pincer Crusher was not used, the process was similar when creating this next gameplay element. Caapora - Oath of the Forest features several obstacles as the player tries to navigate the level - enemies, corridors, floodlights… - and this last one inserts itself in the same line of questioning as the machines. How would an animal interpret a tall light source? 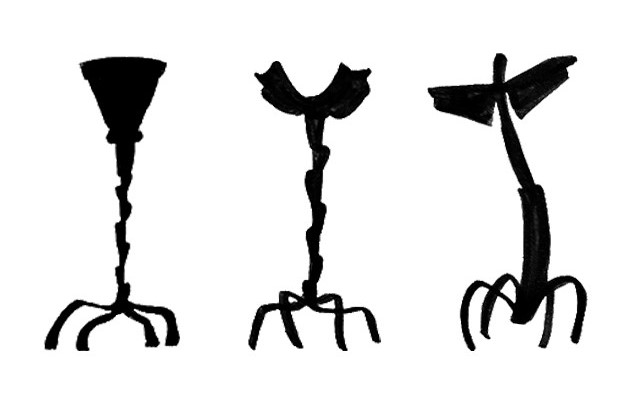 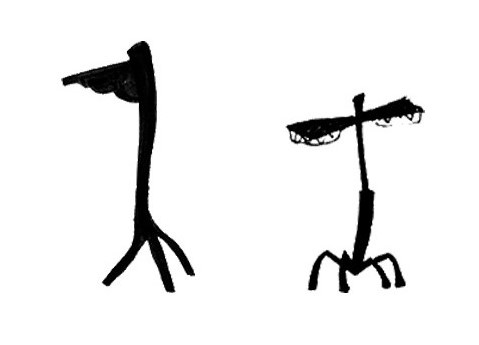 We interpreted it as something akin to a plant or a small tree. It wouldn't be strange to think of it as climbable - although climbing is not a game mechanic in Caapora. Thinking of most floodlights being tripods, the legs can be reinterpreted as insect or animal legs. 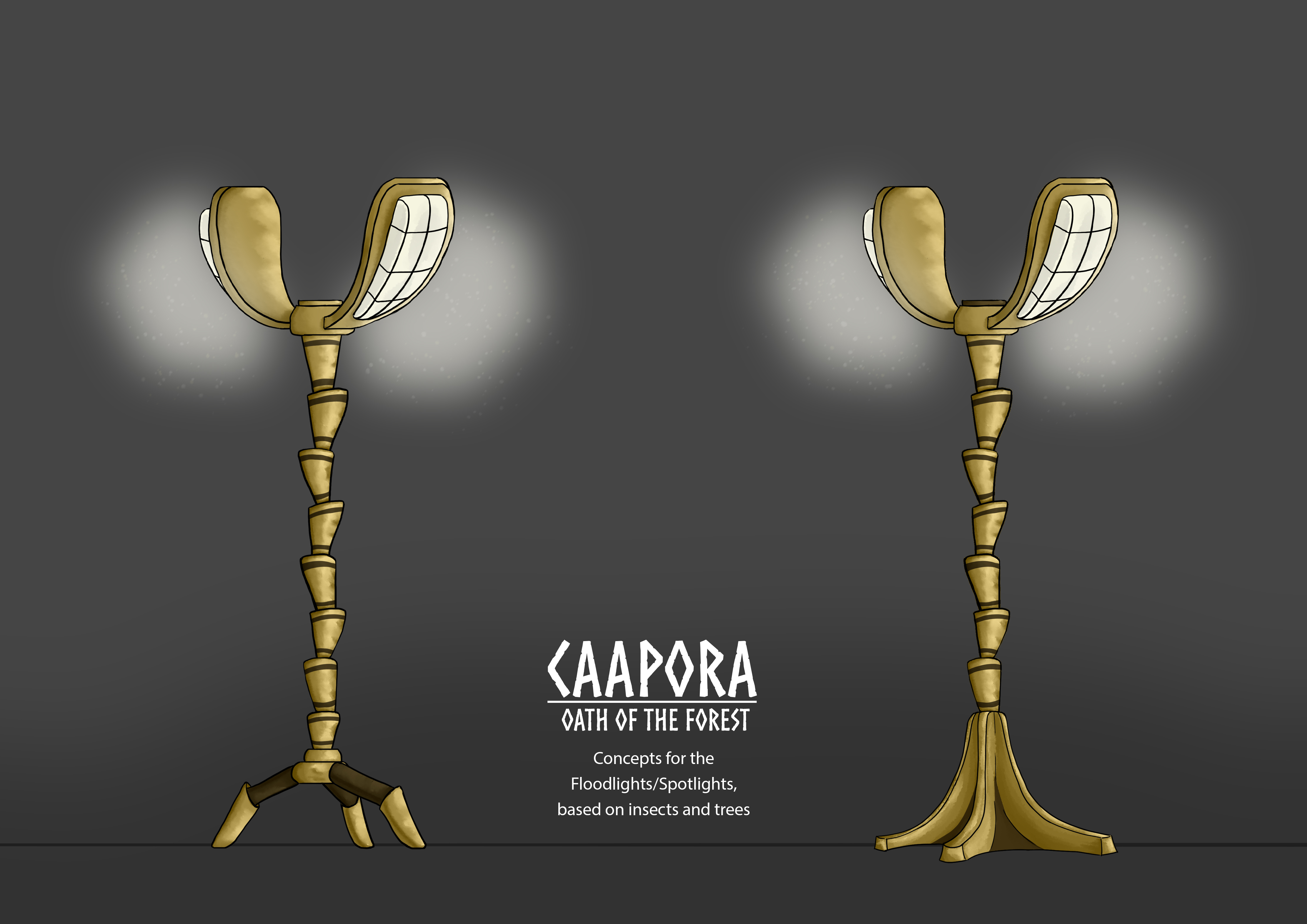 The final design had both the plant and insect inspirations, but due to a change in how each floodlight connected to its generator, the legs were rethought as roots, giving the overall object a more cohesive plant-like appearance.

As for the final model: 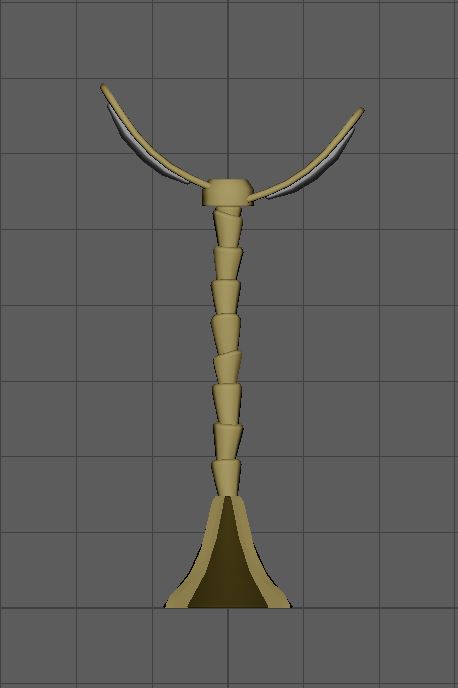 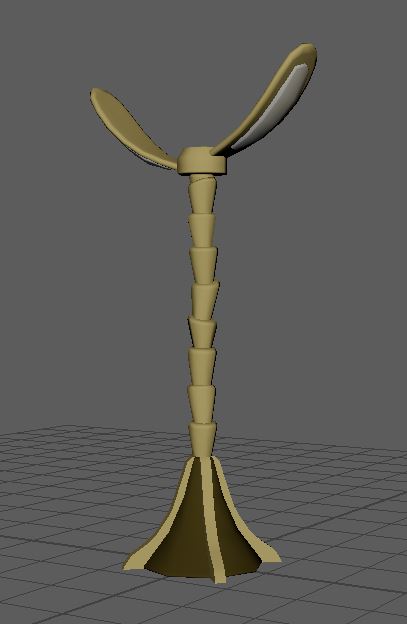 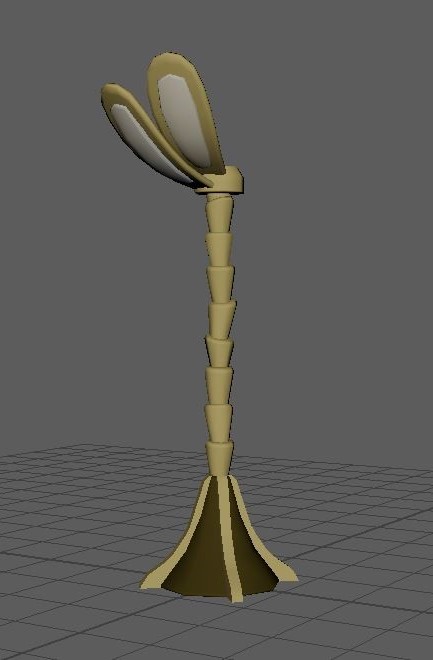 In this final model for the floodlight (sans textures) the second proposed concept was applied. The model has tree elements, such as the leaf lights and the irregular pole. The lights were also placed at different heights to allow for mobility when creating levels. The fact that the lights move around created the possibility of several light set-ups, from two lights far apart to a single light.

And that is all for today folks! Thank you for sticking around until the end of the article and for learning more about our process to create new assets for Caapora - Oath of the Forest. But now for the serious question: Floodlight or Spotlight? We hope to see you again in our next article!

Devlog #3: When Roots Sprout into Gameplay Vines (and Loops!)

Previously we talked about how we created the Core in Caapora, and how we defined our Game Pillars from it. In this Devlog for Caapora - Oath of the Forest...

When creating a video game, Game Design will arguably be one, if not the most, important components. In Caapora - Oath of the Forest, the gameplay has...

Devlog #1: The Mind of the Enemy

Take a look at our process to create the Artificial Intelligence in Caapora - Oath of the Forest! When you need a very reactionary AI, you know you are...

Koala Kompany presents "Caapora - Oath of the Forest", a student project that allows players to play as animals from the Amazon Rainforest and fight to...

Indie
Twitter
Tags
Embed Buttons
Link to Caapora - Oath Of the Forest by selecting a button and using the embed code provided more...