Boxwrecker Arena is a dynamic platformer with a very steep difficulty curve. You will control an unmanned drone on a semispherical mount that will move forward through many challenges. The main twist is that the level is also moving towards you so you have to be fast and perceptive. Try your wits in the tests that will lead you to become a Boxwrecking Champion!

Will you become the best that the Boxwrecking world has ever seen? Your scores in the Challenge Mode will be shown on the global leaderboards. Top ten players will always be visible in the game!

Boxwrecker Arena is an upcoming platformer/runner game that features a very steep difficulty curve. After the player beats the main Tournament Mode (which is hard in itself), they get to enter the Challenge Mode. It's a special game mode that allows them to replay Tournament and Multiplayer levels with added spicing. Their Challenge Mode score is shared and visible to everyone!

Here's a quick peek at one of the levels our programmer completed. Not quite with flying colors, but well...

The sole idea of this mode is to grant players an interesting experience that allows them to test their skills even after they thought they have the game figured out. But how does it work exactly?

The game has a set amount of levels. It's 60 at the time of writing this article, but post-launch updates will implement more. Players can create their own levels, but they are not eligible for the Challenge Mode (so that they don't just make facerolls and call it a day, then going on and on about how good they are because their score is high), but we do mean to pick a few community favourites and allow them to be in the mode.

Levels that are eligible for the Challenge Mode are grouped into difficulty "buckets". Every time a players starts a Challenge Mode, they begin with a given bucket - ususally at "1", but if you are good enough, you can unlock starting at 4th or 8th level/bucket. Apart from the level that gets picked from the bucket, they also are given something our programming department calls "Mutations". It kinda fits too, so let's continue calling it so here. Everytime a players beats the level, they go to the next bucket. 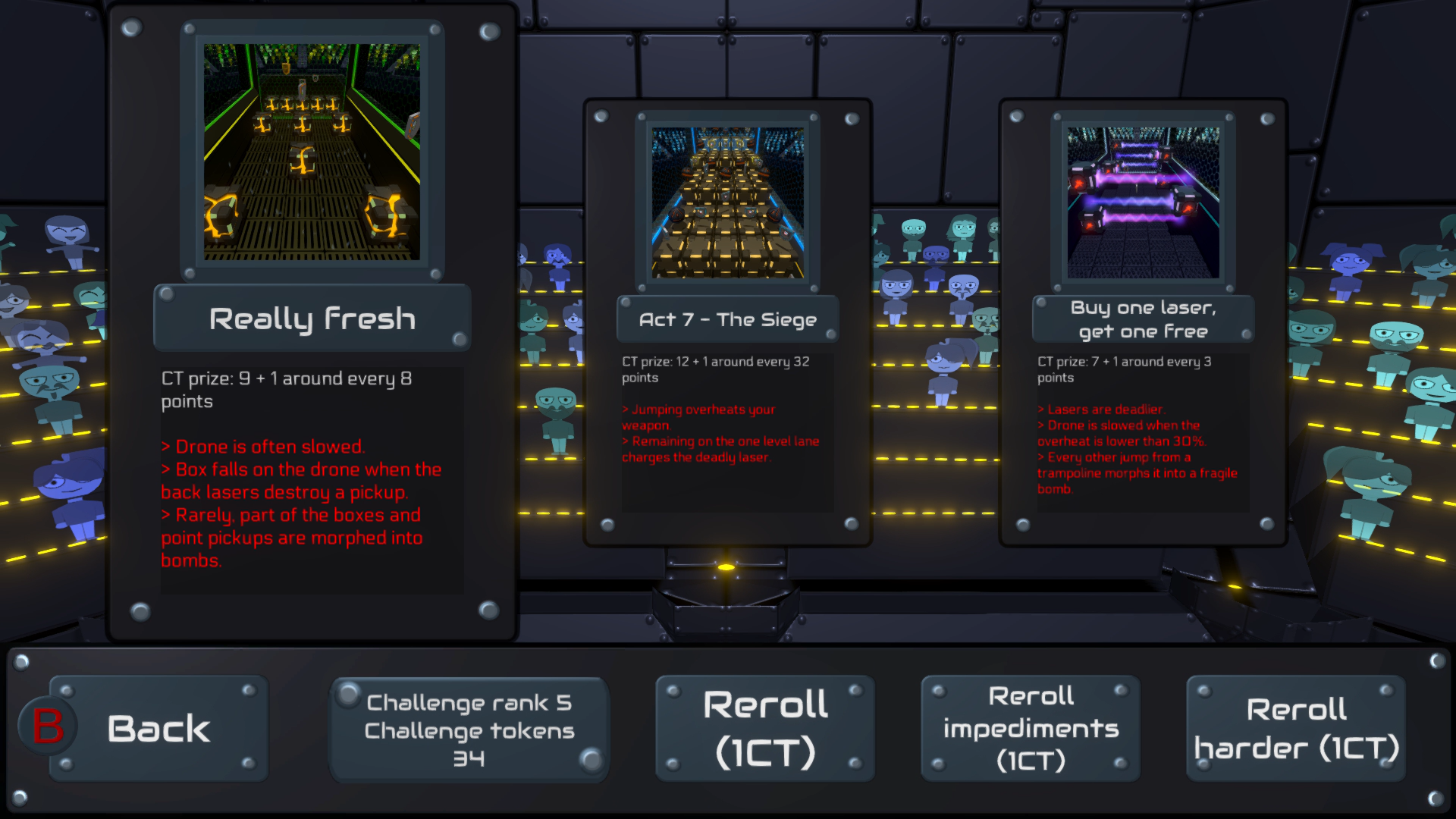 The further the player gets into the Challenge Mode, the harder the levels, but also the mutations get harder and more numerous in further buckets. But what are these mutations exactly? Well, you can see some in the image above, but there are some more, like...

... bombs randomly falling in front of you, because why not? 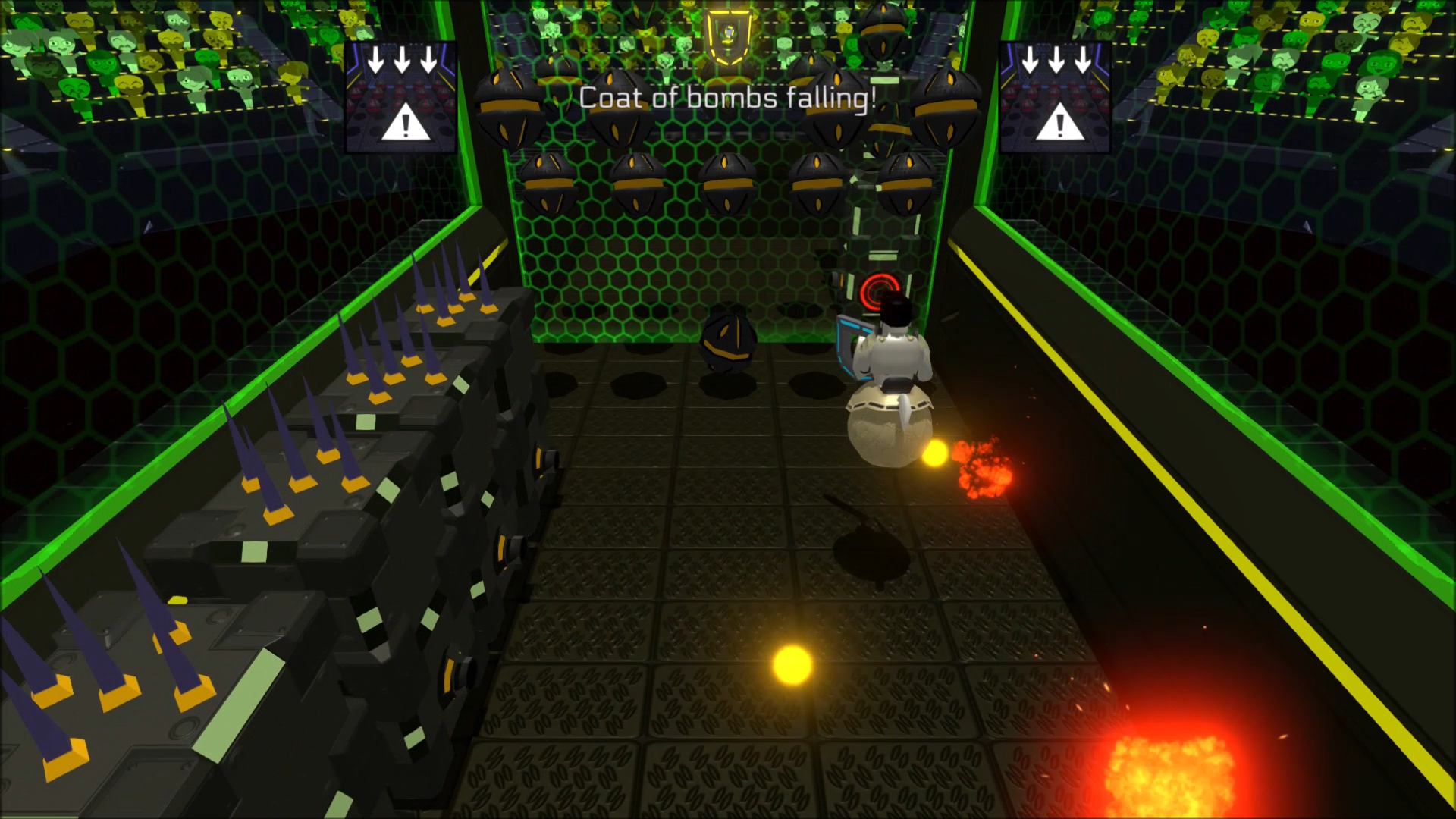 ... deadly laser destroying everything in its path if you don't pick the points, as someone really tried hard to put them there and you just plain ignore them, don't you? 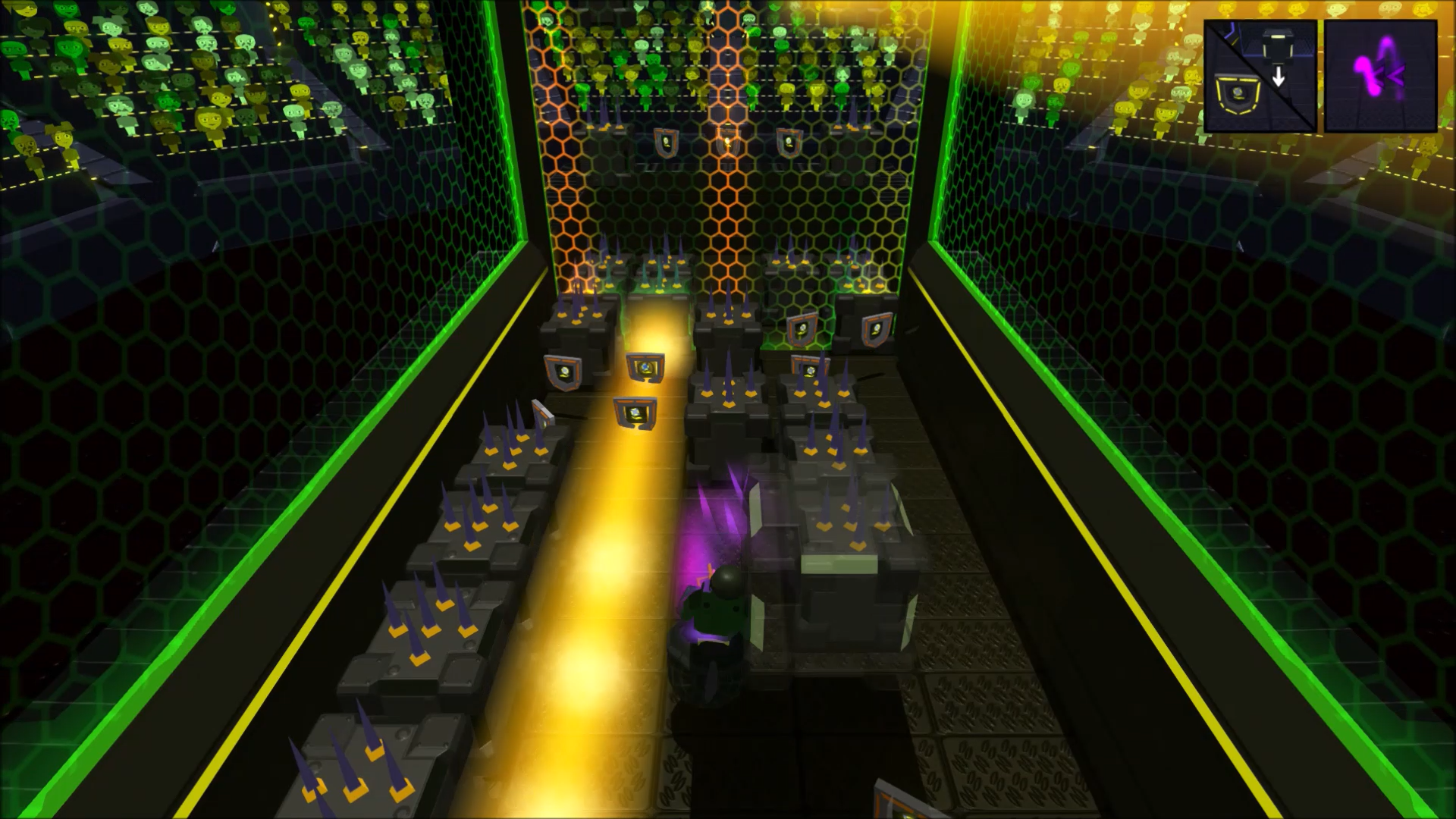 ... floor catching fire in your wake, because you should move, it's good for your health and the health of your unmanned drone. 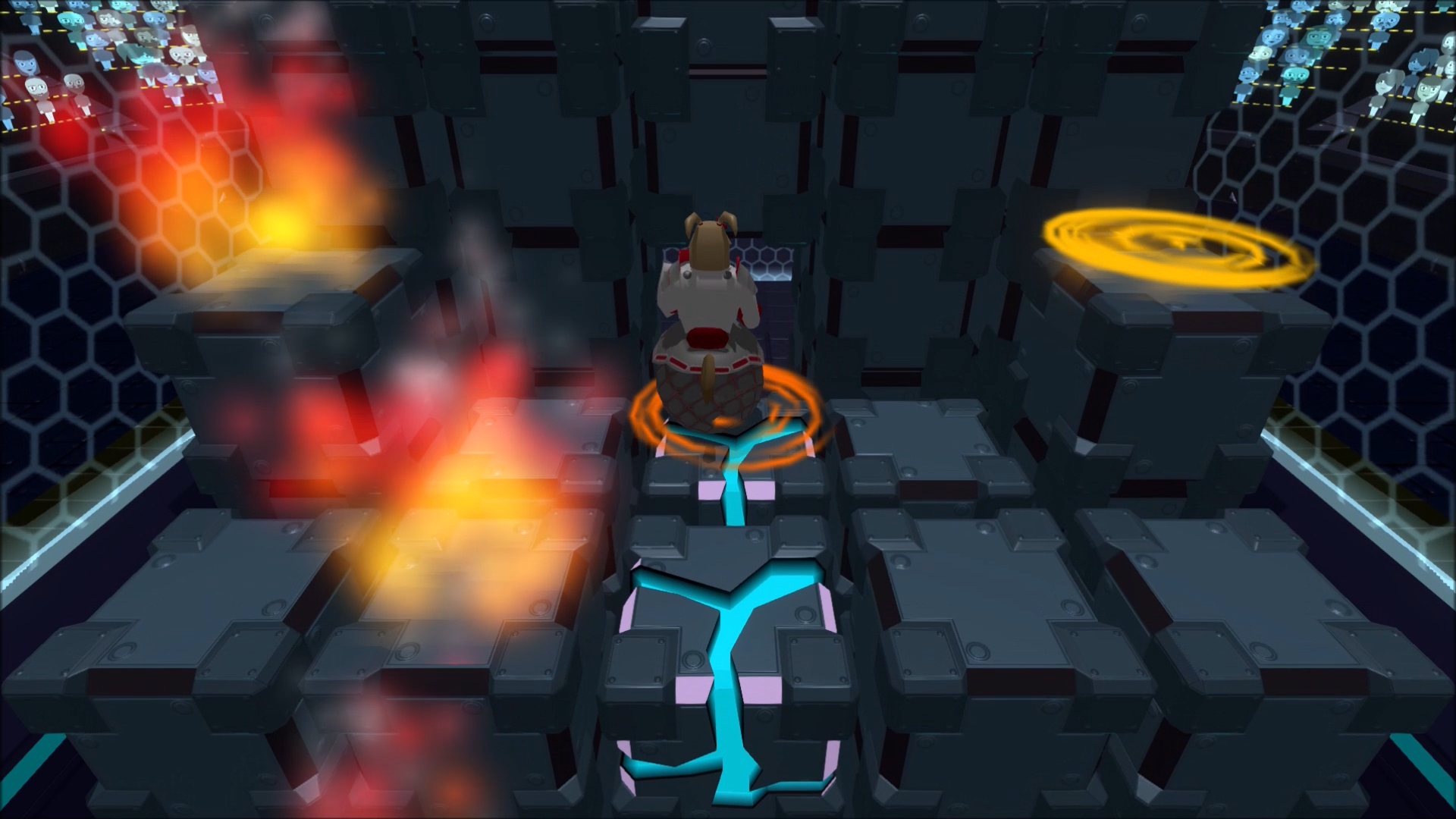 ... or just other things, like "you move slover because... reasons" or "bombs make a bigger boom, so that you have to learn to dodge them again".

Sometimes though, like in the image below where shooting repeatedly makes the deadly laser spawn (like the one in the second image above) is a good thing, because you can destroy things that are not meant to be broken by the level designers and just cheese the level. 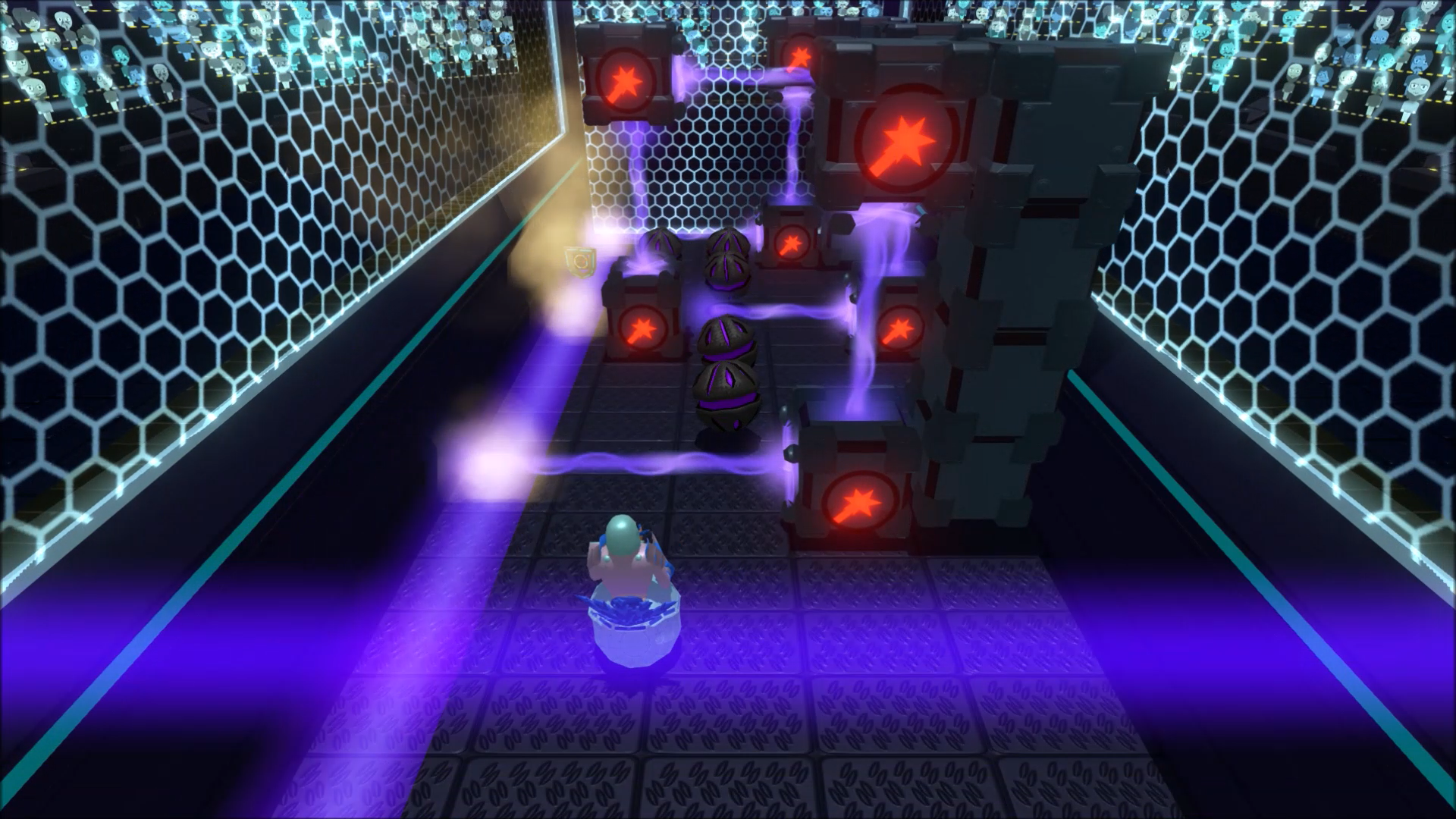 As you can see, Boxwrecker Arena's Challenge Mode offers a pretty modular experience. We tried many different repeatable game modes. One of them was just random levels generator, but we scrapped that. All the levels our level designer created (Yellow Jealous Duck, although she's not a real duck, just a jealous one) are centered around some interesting game mechanic or maybe a gimmick. Making something that just took random parts and mashed them together led to boring yet kinda wild levels. Still, we prefer them to be consistent.

The Challenge Mode proved to achieve that. Levels are already here, but how do we make them harder? In games with enemies, you can just spawn more of them, make them stronger or just plain longer to kill (which is kinda boring in my book too). But here we had to do something else, so we created what you see. Of course, some of the mutations are just number tweaks - but they are pretty unique too. Like one of them increases the explosions' blast radius. That leads to pretty weird interactions as players learn how to cope with bombs and then BOOM! (heh) It's much harder to dodge them here.

We all do enjoy the mode as after months of working on the project, all the levels in their "vanilla" state are pretty... easy? When we give the controllers to our friends they yell at as that all this is too hard, but for us the only problems come from the Challenge Mode. So we assumed - it's working perfectly!

We hope to hear your thoughts on the matter!

In Boxwrecker Arena, level beats you

Boxwrecker Arena is a dynamic platformer in which you control an unmanned drone and try to gain the mantle of the Boxwrecking Champion! Take a look at...