It's the thirtieth millennium when humanity has colonized dozens of worlds and outer space has long since ceased to be unknown. However, the plague which has been keeping the world in fear in the Middle Ages again jeopardize the existence of humanity. There are hundreds of planets in agony and millions of deaths daily. An alien life-forms perishes on an equal footing with humans. Despair and pain have settled in every house. The world on the verge of collapse. The Mortus' s order is the last hope of all intelligent life-forms. Plague's doctors have returned and It's the only ones who can stop the spread of "Black Death". Black Death Divarication - 2d metroidvania with a storyline and RPG elements that will put you in a whole new and a detailed science fiction universe of alternative future. In the game you will have to act as an officer of the Mortus's order who has to keep a watch in one of the colonized worlds.

Release date and other news.

As we heading into 2018, Failed State gets a lot of major updates related to game mechanics and content. And today we would like to share with you some new screenshots and updates information as well as a new release date set to March 8, 2018.

For this time the slight shift in the date happened because we reimagined and substantially improved core gameplay mechanics, adding more features and possibilities for players. The game universe is extending as well as Rose’s skills. As always, improving our players’ experiences takes a lot of time, but it’s definitely worth it.

Today we also cover one of the new in-game features. This is the backpack system. In game Rose is wearing a backpack with some separated pockets, she will place found important things right there. Items that she probably won’t use later for their intended purpose will be disassembled into components for crafting. Items in a backpack are gravity affected and of course, you have an ability to manage its contents.

Disclaimer: animated sequences below were taken from a very early version of the game, that contained only a prototype for this feature. 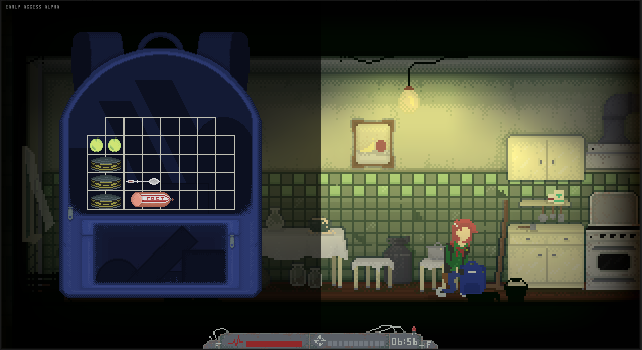 The game is now divided into chapters, each of them ends with a certain plot milestone. There will be several chapters, and what will be released in the first version of early access is actually the first chapter. After the release of this first version of the early access, we will collect feedback and bug reports, so hotfixes and patches will be released very quickly. Then, prior to the releases of the next major updates, new chapters will be available for playing, this will be additionally announced.

Do not worry about your in-game progress. Save files will be fully compatible with all versions and platforms on PC. And if you played the Demo version, you will receive a small in-game award.

Below are a few new screenshots of the locations from the game.

And the last announcement for those who would like to substantially support the project. We would like to get help from you, our players, in translating the game into English. We are ready to provide you with tools for localization process. Also, if you have suggestions for translating the game into other languages (for example French or Chinese), write to us, and we will certainly discuss the possibility of adding them to the game.

If you are confident in yourself ​and are ready to help the project, write to us at translate@intworks.xyz. We will accept your submissions until February 17. Everyone who will make a significant contribution to the localization of the game will be captured in the credits (if you want, of course).

That’s all for today. Thank you once again for your support and we remind you that the latest news and insides appear in our Twitter Twitter.com

We have demo version Black Death Divarication, check it.

Now Black Death Divarication on Steam Greenlight! Support us and leave your review about the game.

Nikki and the Robots Platformer